Shut Your Butt! Celebrating the Glorious Stupidity of ‘MacGruber’ 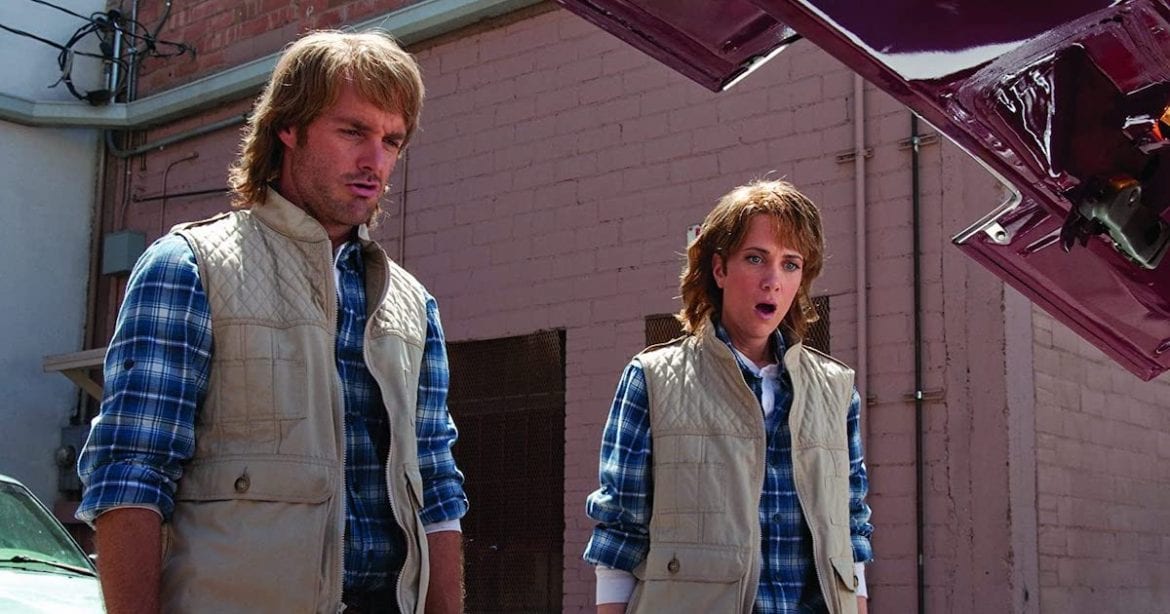 If there’s one thing I admire most in this world, it’s an individual’s commitment to the bit. What that “bit” actually is depends entirely on the situation — the possibilities are endless. Pertaining to the world of movies, it can be Lars von Trier insisting on vilifying himself in the public eye, thus creating a highly devoted fan base and almost ensuring that he will continue to make movies as long as he wishes. (My favorite example is in Antichrist, which begins by showing his name in the title credits, followed by the title of the movie itself, creating the hilarious combination “Lars von Trier, Antichrist”.)

It can also be Tarantino’s insistence on somehow putting feet into his movies. It became so ridiculous in Once Upon a Time in Hollywood with Margot Robbie shoving her dirty feet into the windshield of Brad Pitt’s car that I could do nothing but applaud the man for being so willing to share his kinks on the world stage. At this point, he knows we know about it, so through the power of cinema, he said, “fuck it, I like feet! Here’s more of them!!!”

But the most prevalent area of film where people are committed to the bit is in comedies. Specifically, I’m thinking of instances in films when set pieces or recurring bits are funny, then keep going and become unfunny, only to keep going further and become funny again. Many great comedies stop at that first section — they’re funny from the start and move on to the next scene at its logical conclusion. A perfectly fine structure if you ask me. Most terrible comedies (many coming from Happy Madison) start with jokes that could be funny in theory, but allow the scene/recurring bit to go on too long, but not long enough for irony to kick in. The result is me, sitting on my couch, recounting all the terrible choices in my life that led me to this moment where I have to sit through it.

And then there are those precious few movies that take their comedy to the last leg of this cycle. Movies that understand their stupidity and triple down on it. MacGruber is one of those movies, and it’s been such a joy for me to see its cult of fans grow since its release 10 years ago.

MacGruber Was Never Supposed to Work

As you may know, MacGruber is simultaneously a spoof of the MacGyver TV show and a sketch created by Will Forte on Saturday Night Live. SNL sketches turned into films have a checkered history to say the least. Outside of their first two ventures — The Blues Brothers and Wayne’s World — they’ve been largely unsuccessful financially. Even Wayne’s World 2, an underrated movie in my estimation, didn’t make waves at the box office, hauling in only about $48 million against a reported budget of $40 million. The actual quality of each of these movies is also quite sketchy. Granted, I do somewhat appreciate whatever the hell Will Ferrell and Chris Kattan are doing in A Night at the Roxbury to a degree. (An example of two actors very committed to the bit, but the writing isn’t strong enough to prop them up.)

Jump ahead to 2010, a decade after the last SNL skit-turned-movie The Ladies Man. MacGruber was fighting a losing battle. Even against a fiscally sound $10 million budget, MacGruber made a paltry $9.3 million worldwide. The reviews were also incredibly unkind. It was buried from the start as if cult fascination was its only possibility.

Hard cut to me rolling on the floor, laughing at Will Forte sticking a celery stick up his ass once I caught up with the film after its theatrical run. You could say I joined the cult of MacGruber at that very moment.

For as talented as they are, The Lonely Island crew — consisting of Akiva Schaffer, Andy Samberg, and Jorma Taccone (the director of MacGruber) — seems to only connect with people after their films leave theaters. Besides the initial failure of MacGruber, Popstar: Never Stop Never Stopping is one of the more infamous recent box office flops of the last decade. Their first film, Hot Rod, was also rather unsuccessful. It’s truly a shame, especially because they’re some of the best slapstick joke writers we have right now.

The Lonely Island has a brand of humor that I would call “smart dumb”. “Smart” because the construction of their jokes is very intelligent, weaving many recurring bits throughout their films and also creating great setups and punchlines with great writing; there’s a lot of craft baked into what they do. The “dumb” comes in when you look at the actual substance of those jokes, which routinely revolve around total absurdity, typically from aggressive man-child characters.

MacGruber very much follows that template, following Will Forte as the titular character working to stop the evil Dieter Von Cunth (played hilariously by Val Kilmer) from destroying Washington, D.C. with a nuclear warhead. First of all, let’s focus on that name: Dieter Von Cunth. Taccone and Forte have a blast exploiting it for the entire runtime. “It’s time to pound some Cunth” is nothing short of iconic. Forte in particular always cuts the “h” short to heighten the wordplay.

The list of recurring bits throughout MacGruber is staggering. The aforementioned celery bit, the KFBR392 license plate gag, and the culmination of MacGruber finally getting to rip some throats are some personal standouts. Whatever the case, a clear setup and satisfying comedic payoff are always prevalent.

And then there are the showstopping scenes sprinkled throughout, which go above and beyond to be as outlandish as possible. The first time I saw the film’s spoof of the “getting the gang together” trope is one of the hardest laughs I’ve ever had watching a movie (I’m also laughing about it while writing this); MacGruber pleading with Ryan Phillipe’s Piper in the following scene is up there too. But let’s not forget the ghost sex scene! I’ll let people view that scene in all its glory for themselves.

What Separates MacGruber from the Rest?

In my mind, there are four things that distinguish MacGruber from similar, overly crass movies. The first being the commitment to the bit (which I’ve probably discussed too much so far). Second is the hyperspecific joke writing, which contains all the dick jokes and swearing you could ever need, but blends them with great joke structure and situations that go the extra mile. You never see the level of detail in the KFBR392 license plate joke in movies like Fist Fight. (Side note: remember Fist Fight???)

The third item goes hand-and-hand with #2 above, and that’s the precise editing in each scene which delivers near-perfect comedic timing. Much of this comes from intelligent comedians like Taccone, Forte, Kristen Wiig, and others coming together and planning everything out before the camera starts rolling, meaning less improvisation and awkward edits. Improvisation in perfectly fine when it isn’t used as a crutch, but too much of it is almost impossible to edit appropriately. If you’ve seen a lower-end Melissa McCarthy movie, you understand the kind of flat, awkward scenes that too much improvisation can create; they rarely have a defined structure. That being said, I’m sure some improvisation took place during the film’s production, but the amount of planning in each scene is easy to spot.

The fourth reason? The brilliance of Will Forte, of course!

Will Forte’s brand of humor will always make giggle. He’s enthusiastic, overeager, and maybe a little too aggressive at times, but he always finds a way to remain endearing. To this day, his joyful line delivery of “shut your butt!” is one of my favorite things. Period.

Smartly, everyone else plays it straight when conversing with Forte’s MacGruber; there’s never a feeling the actors are attempting to one-up each other. Everyone lets Forte take the lead, filling in the gaps where necessary. While Ryan Phillipe’s performance as the boy scout special forces operative Piper may not stand out when watching the film, it’s entirely necessary in allowing Forte to go full Forte.

Continuing the Legacy of Spoof Movies

The casting of Val Kilmer as Dieter Von Cunth is also significant, mainly for the symmetry to Kilmer’s first movie role in the Zucker Brothers’ underrated spoof classic Top Secret!, in which he plays a sparkly clean spy hero attempting to thwart the Germans from carrying out their own brand of mass destruction…and also sing “Tutti Frutti”. In a lot of ways, MacGruber feels like a tip of the cap to some of the Zucker Brothers’ work.

The major reason I have yet to mention as to why the film failed upon its release was that spoof movies were in a massive tailspin at the time, headlined by Jason Friedberg and Aaron Seltzer releasing such atrocities as Epic Movie, Meet the Spartans, Disaster Movie, and Vampires Suck all within the same timeframe as MacGruber. The spoof genre hasn’t totally recovered since, which partially explains audiences’ reluctance to embrace MacGruber and the overall work of The Lonely Island. With Friedberg and Seltzer currently working on their Star Wars spoof, entitled Star Worlds Episode XXXIVE=MC2: The Force Awakens the Last Jedi Who Went Rogue — kill me now — who knows when our wounds will heal.

Regardless, MacGruber reminds me of the better parts of the spoof genre. I’m waiting for the day when we collectively induct it into the spoof movie canon. My guess is it’s only a matter of time before it gets there — see you in another 10 years!

Thank you for reading! What are your thoughts on MacGruber? Comment down below!

[…] commitment to the bit in Mother Schmuckers is unbelievably strong. Even with its short length, the film absolutely […]

[…] Kush: The forgotten spoof classic from the Zucker Brothers, Top Secret! never fails to have me fall on the floor with laughter. Seriously, the little German joke may be […]

[…] 365 Days, but unlike Paul Verhoeven’s Showgirls, I doubt many will be reading this movie as a secret masterpiece in the years to […]

A Decade Since ‘No Strings Attached’ and ‘Friends...