‘Mass’ Is a Study of Grief, Told Through Masterful Performances

Hauntingly bleak but expertly grounded, ‘Mass’ is a powerful showcase for its brilliant character actors. 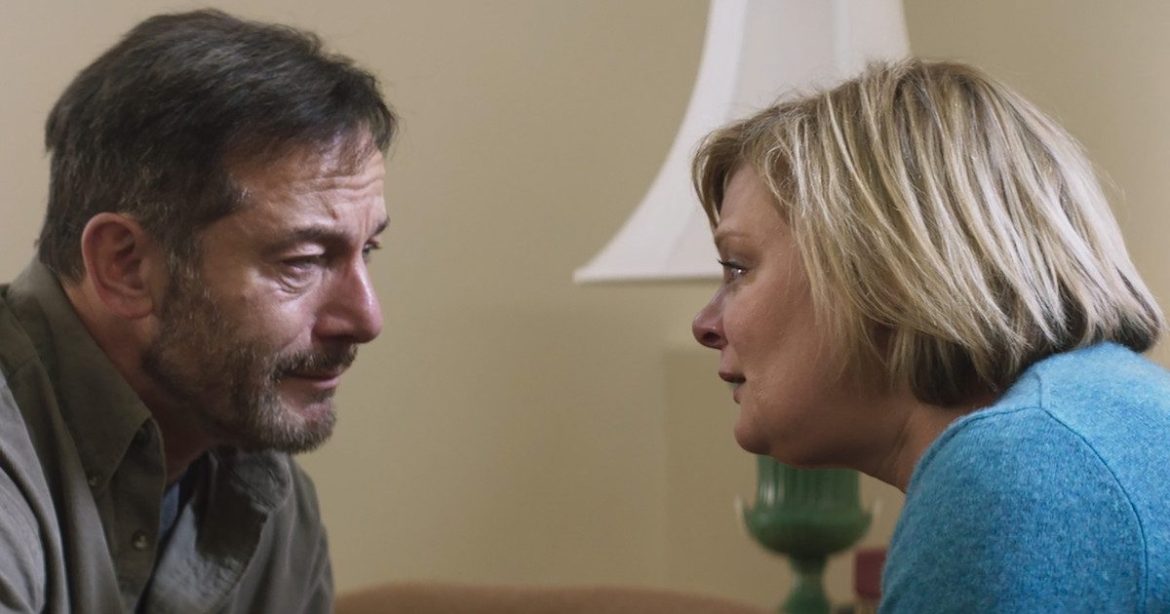 There’s a line that creators of topical art must keep in mind as it’s being crafted — so easy is it to become melodramatic, “preachy”, or unrealistic. The slightest misstep can take a viewer out of the drama of the film, and leave them questioning the realism or likelihood of plot beats occurring. That fine line is something that Mass walks with near-triumphant aplomb, as it tells a story so real, so vivid, and so moving that it threatens to burst forth from the four walls that contain almost the entirety of the film.

First debuting at the 2021 Sundance Film Festival, Mass tells the story of an arranged meeting between the parents of a school shooting victim, and the parents of the perpetrator.

The meeting — apparently years in the making, after the pending civil suits that occurred in the aftermath had been settled — takes place in a heavily controlled environment. The lawyer who represents the perpetrators’ parents (played by Reed Birney and Ann Dowd) selects the location: a small backroom of a modest church. Also in attendance are the parents of one victim (of ten), played by Jason Isaacs and Martha Plimpton. These parents have chosen not to sue or pursue legal action, and have requested the meeting to learn one thing: why.

Staged like a play in one single room, the film showcases the personalities of each character — defeated, angry, grieving. And a set of powder kegs long on the verge of explosion.

Unlike a play, however, Mass has the advantage of the close-up and gives the audience a front-row look at the toll that years of grief and anger have taken on the faces of each character. Deftly guided by Fran Kranz — perhaps best known previously as the stoner Marty from The Cabin in the Woods — in his directorial debut, the camera rarely leaves one of the faces of the monologuing actors, forcing the audience to confront discomfort and stare directly into the faces of tragedy, just as the characters themselves are. And it isn’t just the visual intensity that drives that discomfort and confrontation of the film — it’s the oppressive silence, as Darren Morze’s score only exists outside of the confines of the room where most of the film takes place. Put together, one’s senses are put through the emotional ringer as all focus is on the performers in the room.

And truly — what performances they give. In a better world, all four main actors would be given awards attention for what they bring to this piece; each lending the film a different angle from which to view grief in all its forms. But the standouts here are Plimpton and Dowd, who bring characters to the table coming from completely different perspectives, personalities, and reactions, but are united by the same tragedy, and the same loss of a child. Plimpton’s character is still barely holding it together after six years of grieving, and her delivery of both heartbreaking monologues and withering, annoyed eye-rolls create a pitch-perfect atmosphere. Dowd, meanwhile — a favorite in this house from The Leftovers and The Handmaid’s Tale — plays the mother of the shooter as pitiful, empathetic, wise, yet completely lost. Her performance will likely garner the most Oscar attention, but it would be incomplete without her husband (Reed Birney), who in a worse film would have been a gun-toting 2nd Amendment advocate. But here, he is merely defensive; confused, and broken, but unwilling to yield to the notion that any one issue (or action of a parent) could have caused such tragedy.

If the conversation between parents is the meat of this Mass sandwich, what surrounds it is the mundane bread that solidifies this film as one worth viewing.

Sparing the viewer any cloying melodrama, Mass instead reminds us that these conversations are awkward. They are between real people who rarely know how to start or end these intense conversations, and they are surrounded by the mundane world that keeps moving forward, even as those in grief feel stuck in the past. It’s a brilliant inclusion in a film aimed at showing how our world is not designed to help heal those who need it most.

There’s no way around it: Mass is a huge downer. It’s bleak, wrenching, and forces you to confront the breaking point of the human spirit. But it does so in a way that feels incredibly real, without ever sacrificing its cinematic abilities. Come for the Oscar reel monologues, but stay for the power of the story. For an issue as prevalent in our society as this one, there are far too few works that convey all the emotions and attitudes at play so convincingly and beautifully as Mass.

Thank you for reading! What are your thoughts on Mass? Comment down below!