Prepare for ‘Uncut Gems’ to Repeatedly Punch You in the Face (In a Good Way!) 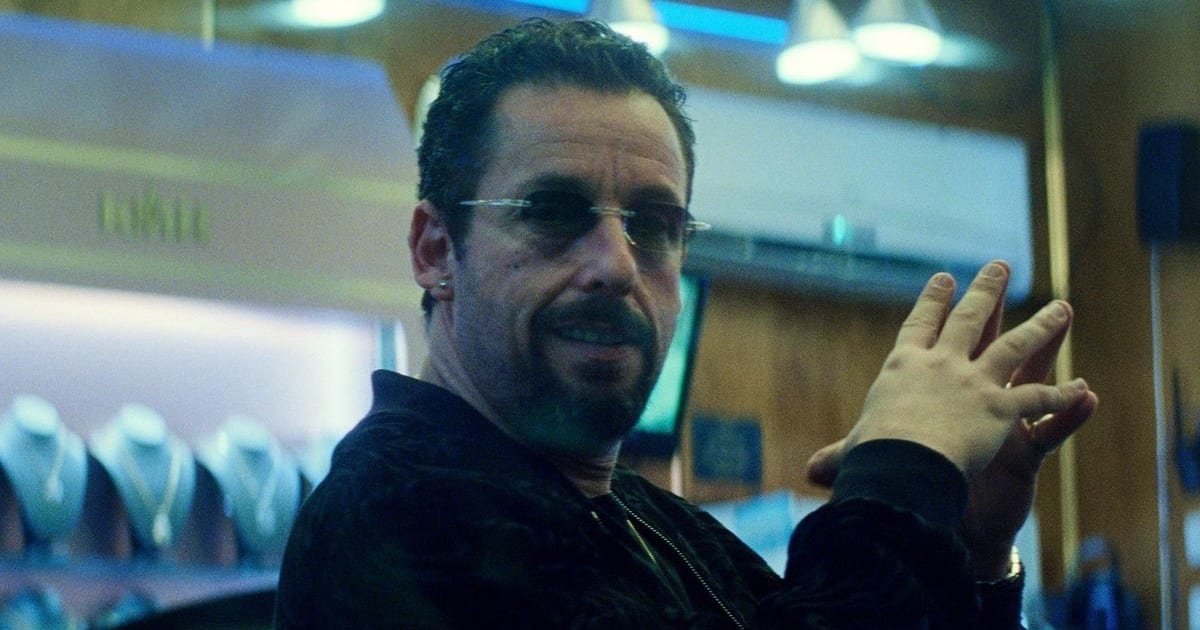 Uncut Gems feels like it is partially plucked from my dream journal. It has so many things that I love or am captivated by, from a New York-based crime story to a great Adam Sandler performance to even a 2012 NBA playoff series that I still agonize over to this very day. I guess the Safdie Brothers just know the way to my heart.

After seeing Good Time back in 2017, I had a hunch that Josh and Benny Safdie would eventually make something that I would fall in love with. It was clear from Robert Pattinson’s performance that they were tremendous with actors and could shape their talents accordingly, but what was truly striking about Good Time was its sense of style and tone, which combined for a furiously relentless experience as the film managed to give me a mild panic attack. My appreciation for the film has only grown over time because of this feeling — it’s one of the more striking sensations I’ve felt in a theater over the last few years.

The Safdies continue what is becoming their signature style of anxiety-inducing thrills in Uncut Gems, which follows the wonderfully scummy Adam Sandler as Howard Ratner, a jewelry store owner in the Diamond District of New York City in 2012. Howard is constantly hustling, pawning jewelry that is given to him and immediately gambling with those funds in search of a big score. One day, Kevin Garnett (who plays himself) comes into Howard’s store, and Howard quickly shows Garnett a rare black opal that he managed to get from the Welo opal mines in Northern Ethiopia.

Garnett immediately feels a connection with the stone and wishes to borrow it, to which Howard refuses as he is going to sell the gem in auction for a very hefty price. After a few moments of gesticulating and negotiating between the two, Howard lets Garnett take the stone in exchange for his 2008 championship ring as collateral…which he immediately takes to the pawnshop to use for gambling on the Celtics-Sixers playoff series in which Garnett is playing.

Naturally, things don’t go as planned for Howard, and people are coming from all angles to collect from him, especially Arno (Eric Bogosian) and this team of thugs; and just like in Good Time, the main character simply cannot get out of his own way. The anxiety that comes with his poor decisions only gets worse as the movie progresses. A lot of this comes from the Safdies’ direction and staging. There’s an element of chaos to every scene with sweaty, angry New Yorkers constantly yelling over each other. Think of it as a Robert Altman movie on cocaine, with scenes as simple as a tour through a jewelry shop including multiple conversations layered over each other that knocks the entire scene out of equilibrium.

Whether Howard is battling thugs, running around town, dealing with his wife who hates his guts, or attempting to corral his girlfriend Julia (Julia Fox), he never has time to breathe. Most of the time he’s handling multiple stressors in the same scene, with different people pulling him in different directions.

Uncut Gems establishes Josh and Benny Safdie as the new torchbearers of New York crime movies, and yet it is Adam Sandler who is most likely the biggest winner of the film. I’ve always had a fondness for Sandler, essentially growing up on some of his 90s comedies, most notably Billy Madison and Happy Gilmore. After I began working myself, I started to see his less-than-stellar track record of movies from a different angle: most of the time, he’s merely attempting to make his working life as comfortable as possible by being around his friends in fun locations. It’s a sentiment that we all seek in some capacity as we look to earn the most money in the best possible situation; it so happens that Sandler does it in the public eye.

Still, from an artistic perspective, it’s undeniably frustrating to see Sandler in something as limp as Murder Mystery when he’s showed on occasion how talented he is when he works with a good director who has a strong vision of how to use his personality. The obvious examples are Punch-Drunk Love, The Meyerowitz Stories, and the first hour of Funny People, in which Paul Thomas Anderson, Noah Baumbach, and Judd Apatow used some of the quirks of Sandler’s personality to great effect.

In Uncut Gems, the Safdies tap into Sandler’s expert ability to act like someone with sociopathic tendencies. Even in Big Daddy, Sandler is a few steps away from being clinically insane; and weirdly, you still rooting for his character — at least partially. He has a way of being a lovable madman in ways that few actors have ever channeled. 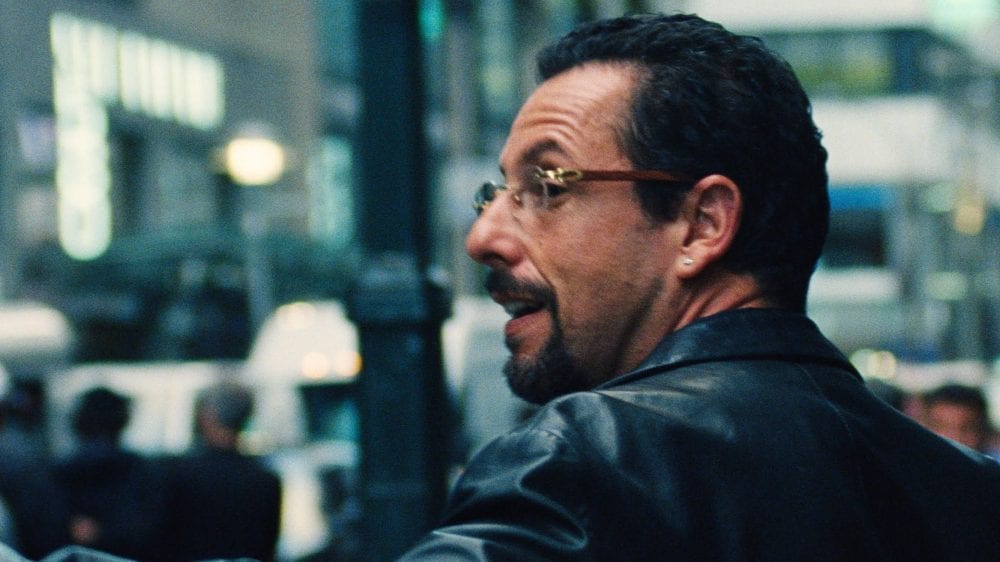 The character of Howard Ratner is Sandler reaching his final form — or at least very close to it — in playing an insane person. He’s profane, despicable, and downright lousy. In the eyes of his wife Dinah (played perfectly by Idina Menzel), he is a complete and utter failure. But in only a way that Sandler can deliver, Howard possesses manic energy that is wildly entertaining. He does whatever he can to squirm out of troubles, which naturally gets him into even more trouble down the road. It’s always about the short term for Howard; his thinking is always “how can I get out of my current situation?” or “how can I make a profit in the next hour?” You’ll throw a fit in your seat as you attempt to handle his flawed logic, but it’s consistently thrilling.

Howard is certainly part of the whole in this depiction of New York with dozens of angry men hurling obscenities at each other. But Uncut Gems is also an enlightening look into the Jewish community in New York. The Safdies spend a lot of time with Howard’s family performing ceremonial dinners as well as taking in the general vibe that comes with the culture.

It’s that attention to detail that helps explains how the Safdies made a great movie that follows such a repulsive lead character. Uncut Gems knows at all times that Howard is trash. When he tries to turn the page and start over, the movie knows to throw that BS back in his face. Idina Menzel’s Dinah has the most perfect reaction to one of Howard’s pleas for forgiveness — it’s currently one of my favorite items in pop culture.

Instead of empathizing with Howard himself, Uncut Gems asks for empathy with his circumstances. His feelings of desperation and despair are highly tangible; they also feed into Uncut Gems‘ stark perspective on greed. The film begins with a quick prologue in Ethiopia in the opal mines, and then makes its way to New York with a transition that is both hilarious and foul, while also being oddly thoughtful. It perfectly underscores what the movie stands for in a lot of ways. The black opal in Howard’s possession then takes on almost mystic importance to both Kevin Garnett and Howard, which is both an incredibly broad and insightful stroke of filmmaking by the Safdies.

Selfishness and greed run through many of the characters. The allure of wealth and power is immensely palpable, whether characters look to take it by force or attach themselves to it like Howard’s girlfriend played by Julia Fox, who will most likely go on to become very famous after her performance here.

But even on the most superficial level, Uncut Gems thrills with the sheer amount of noteworthy personalities in it that get to work with great material. Kevin Garnett even has possibly the best debut ever for an athlete-turned-actor. Somehow, the Safdies balance Sandler with Idina Menzel, KG, The Weeknd, LaKeith Stanfield, Judd Hirsch, and even Mike Francesca.

As I see it, Uncut Gems is the kind of movie that works on multiple fronts. It’s a balls-to-the-wall thriller for people who connect with visceral movies. It’s a great nerd movie for people like me that geek out over niche NBA talk. Artistically, there’s also plenty of pieces to unpack. It’s also shlocky as hell. Uncut Gems‘ only fairly noticeable flaw is that Good Time exists, and the two films share a few plot and thematic through lines. Regardless, it’s a wild ride that will pummel you into submission in the best possible ways.

Thank you for reading! What are your thoughts on Uncut Gems? Comment down below!

[…] the commotion, they lose their sex-worker mom’s beloved dog January Jack and must now go on a Safdie Brothers-esque escapade to retrieve the dog and regain their mother’s love. If you squint hard enough, you can talk […]

[…] New York City movies. (“It’s almost another character in the movie!”) Anyone who frequents this website knows my unabashed, overbearing love for anything from the Safdies, my choice for the current Kings […]

[…] Maine’s directorial debut is one of those precious few films that feels like it somehow got into my brain and scooped out some of my own memories, twisting them slightly for hilariously entertaining […]

[…] nihilism, and you got yourself one of Saulnier’s gripping stories. At his best, he rivals the Safdies in the amount of tension he can wring out of a […]

I liked your article. I scanned some of it because I don’t want to know too much ahead of time. I think Spanglish should also be noted amongst Sandler’s more exceptional works.

Why thank you!!! Spanglish is definitely another good one. I hope you enjoy the film when you eventually get the chance to see it!