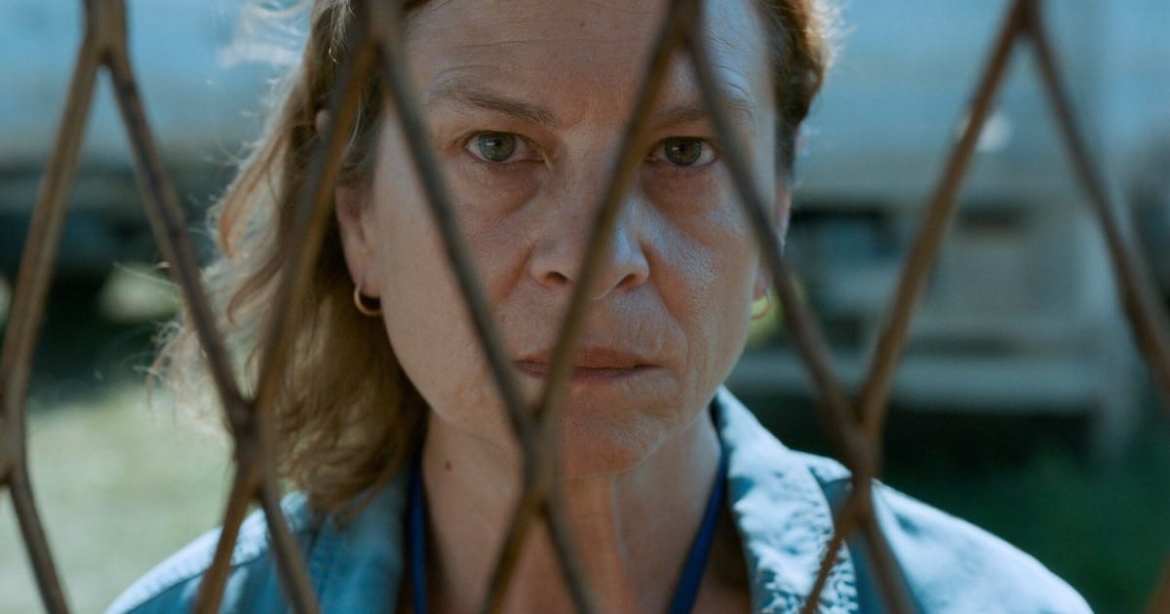 After the Holocaust, the catchphrase “Never Again” caught fire. It was supposed to be the reminder of what hate and prejudice can do to humanity. But in the 76 years since World War II ended, it has become nothing more than empty words.

Aida Selmanagic Is the Oskar Schindler for Our Era

The new movie, Quo Vadis, Aida? takes place in 1995 Bosnia. As the Bosnian war rages on, the comfortable life Aida Selmanagic (Jasna Đuričić) had is in the past. With the Serbian army rolls into the town of Srebrenica, thousands flee towards the safety of the UN compound. Among those are her husband and teenage sons. Within the compound, Aida is working as a translator.

With only a handful able to get inside, many more wait outside, hoping for safety and shelter from the invading army led by the Serbian General Ratko Mladić (Boris Isaković, Djuricic’s IRL husband). The General appears to be amiable and gentleman-like, but there is a cold cruelty under his easy-going exterior. Aida is faced with a problem that can only be compared to Sophie’s Choice. She can either save her immediate family or save as many people as she can. She cannot do both.

I was blown away by the acting, specifically by Đuričić. In a state of perpetual stress, she is frequently in motion. Caught between the politics of the useless UN officials and the emotional connections to the people around her, she spends most of the film on her feet. She rarely stops to rest, and if she does, it is brief at best. Watching her move around the base, I felt both angry and sad for this woman. The task laid at her feet is nothing short of impossible, it is a responsibility I would wish on no one.

It’s About Time the Spotlight Is on the Srebrenica Massacre

When we talk about the persecution and massacres of minorities, the topic that comes up most often is the Holocaust. Don’t get me wrong, given my family history, I will never stop talking about this era in Jewish history. But we also cannot ignore the fact that it was not the only mass murder of the post-World War II era. In July of 1995, more than 8,000 Bosniak Muslim men and young men were murdered.

It was not only the men whose lives were destroyed. Women and young girls were systematically raped, sexually assaulted, and tortured. Boys were taken from their mother’s arms, later found dead by the hands of the Serbian army. It is a tragedy (like all acts of this ilk) that deserves our respect and historical review.

The Violence is Obvious, But Not in Your Face

With every war movie, gore and death are to be expected. What makes Quo Vadis, Aida? different is that with the exception of a few scenes, it is implied and heard, but not seen. This, in my opinion, makes the reality of the world harder to emotionally contend with. Unlike Schindler’s List, where Steven Spielberg is upfront with the violence and bloodlust, director and screenwriter Jasmila Žbanić leaves most of that to the viewer’s imagination. As an audience member, this decision is a wise one. It forces one to see the characters not as nameless victims, but as fully-fledged human beings whose lives were taken solely because they were different from their neighbors.

A Lesson That Still Has to be Learned

If nothing else, Quo Vadis, Aida? is another reminder of how inhumane we can still be to each other. The specific details change, but the overall narrative is the same. The message, I believe, is that until we begin to see past the stereotypes and the labels, this same cycle of violence and hatred will continue.

Thank you for reading! What are your thoughts on Quo Vadis, Aida? Comment down below!