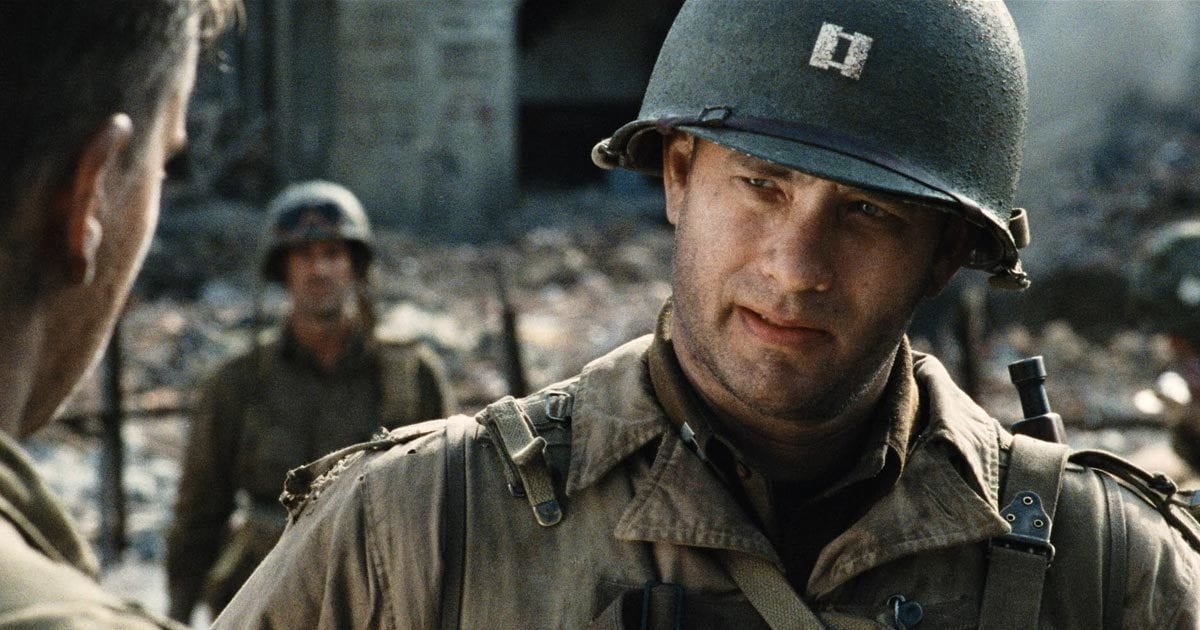 Take that question mark out of the title — Saving Private Ryan (1998) is the greatest war movie ever, period. It has a star-studded cast, brilliant choreography, an experienced director, and it isn’t afraid to show the gritty side of war.

I may be a bit biased, as I have an affinity for war films and Tom Hanks (as our readers already know), but I’m sure that I’m not the only one who feels this way about Saving Private Ryan. Released on July 24, 1998, it is quite possibly one of the most well-directed and beautifully-shot movies of all-time. On its 20th anniversary, I’d like to take a moment to laud Steven Spielberg’s Saving Private Ryan.

The Most Overlooked Element

Some of our more frequent readers may be expecting me to say that the score is the most overlooked element in a movie. Normally you’d be correct, but not in this case.

In this case, I believe the most overlooked element of Saving Private Ryan is the lighting. Yes, something as simple as the lighting. Throughout the movie, the lighting is faded and washed-out. Even when the sun is shining, you get the feeling that it’s still not very bright or warm. This is meant to reflect the mood of war, especially World War II — cold, dark, and not a whole lot of brightness.

I especially appreciate the use of the faded gray lighting used during the rainy scenes, which really give the film that gloomy, dark feel that makes it so realistic. It’s an uncomplicated addition to the film, but one that truly sets it apart from other war films.

I’ve alluded to this element of the film before, but I think it deserves another mention. This film has a menagerie of A-listers, including Tom Hanks, Matt Damon, Vin Diesel, Barry Pepper, Adam Goldberg, Ted Danson, Paul Giamatti, Bryan Cranston, Giovanni Ribisi, Jeremy Davies, and even Nathan Fillion.

Sometimes films with large casts can be a hit with audiences, but lack a plot with actual substance. Too many characters and too many plot lines to hit on means that writers have a hard time accommodating all of the cast. However, that is not the case for Robert Rodat, writer for Saving Private Ryan. He created characters with substance behind them that we could empathize with. Unlike other war movies, the characters weren’t paper-thin pawns for weapons of destruction.

I especially enjoy Tom Hanks’ character’s development. Captain Miller is the tough, no-nonsense leader of the squad searching for Private Ryan. He seems like a rock — impossible to break and almost unfeeling. But throughout the movie, we see him open up and reveal more to the men he is fighting and dying alongside. We see how the war actually changes the characters.

Let’s just collectively admit that there’s a fine line between remembering something and glorifying something to make people believe a certain event is “cool” or “trendy.”

For example, Lincoln (2012) remembers the Civil War, Gone With The Wind (1939) glorifies it. When it comes to war movies, it’s very easy to glorify instead of remember. Just look at Full Metal Jacket (1987) — its swinging tunes and its bawdy humor glorify the Vietnam War to feel like some sort of demented death trap.

But Saving Private Ryan doesn’t fall into that trap. The characters in our story may have friendships with one another and they may even share a joke or a smile every so often, but we are never fooled into thinking that war is fun. We are shown that war is cold, uncomfortable, dangerous, heartbreaking, and basically pure hell.

There’s Something About Tom Hanks…

Yes, yes, I know. I have a very high opinion of Tom Hanks. But, it’s not a totally unfounded opinion. His performance in Saving Private Ryan is the best in his career. Let’s look into a few examples.

The first example I have is the best — after Wade dies and the others are burying him. Captain Miller goes off on his own, presumably to review his map, but what he does is more revealing; he goes off to cry. It’s a telling moment in his character because up until now, we’ve seen no crack in his strong persona. But Tom Hanks shows how the war has worn down Captain Miller, from a confident, sure man to a broken one who’s seen too much. Also, Hanks is really good at crying on cue.

The second example is Captain Miller’s death scene, another great depiction of the character’s personality. Even after being fatally wounded, Captain Miller continues to fight with a defiant stare. Until the last bullet leaves his gun, he perseveres, knowing all the while that it’s useless. Hanks does a fantastic job of portraying a man on his last straw — nothing left but still fighting. And the final example I’ll share with you (though there are many more in the film) is the interaction between Tom Hanks and Matt Damon before the final fight. To break up some tension, Private Ryan (Damon) tells Captain Miller a funny story from his youth. I have always particularly liked this scene because we get to see the apex of Captain Miller’s development. Finally, after the long months of slogging through the mud and death of war, he smiles and laughs. He is relieved that his mission is completed and it shows in the brightness in his eyes.

Overall, I wish this had been one of the movies Tom Hanks had won an Oscar for, as it is — in my humble opinion — his best work.

Saving Private Ryan is hands down the best war movie ever made. It’s realistic without glorifying a truly violent event. It has great performances from great actors. And director Steven Spielberg utilized the lighting and cinematography of the film in such a brilliant way.

While you may not be a fan of war movies or (heaven forbid) not a fan of Tom Hanks, you have to admit that Saving Private Ryan is an excellent piece of filmmaking. I will forever be miffed that it lost the Best Picture Oscar to Shakespeare in Love (1998), since it is obviously one of the best films ever made.

Thank you for reading! What are you thoughts on Saving Private Ryan? Comment down below!

[…] playing his trainer Joe Gould, is amazing. If we’re talking about underrated actors, Giamatti is close to the top of my list (I can prove it if you click here). Like Crowe, Giamatti is full of […]

I like this film. but there are better war films.

Definitely one of them! It set an unprecendented mark on the war genre. On a technical level I would still say Dunkirk simply because of just how authentic it felt, but from a storytelling perspective Saving Private Ryan was masterfully executed.

If television was also accounted for, I would say Band of Brothers just edges it in the top spot for me (though I understand they’re two completely different formats and therefore inherently have very different approaches).

This is a really great tribute to he greatest war movie ever. Thank you!

Yes, yes, yes and yes! I’m not a fan of war movies but my husband is so I watched this with him. He ranks this as one of the best and I was in awe of this film immediately after watching. It’s the good standard for the genre.