Maxwell McCabe-Lokos' oddball movie about a highly flawed social experiment refuses to color within the lines. 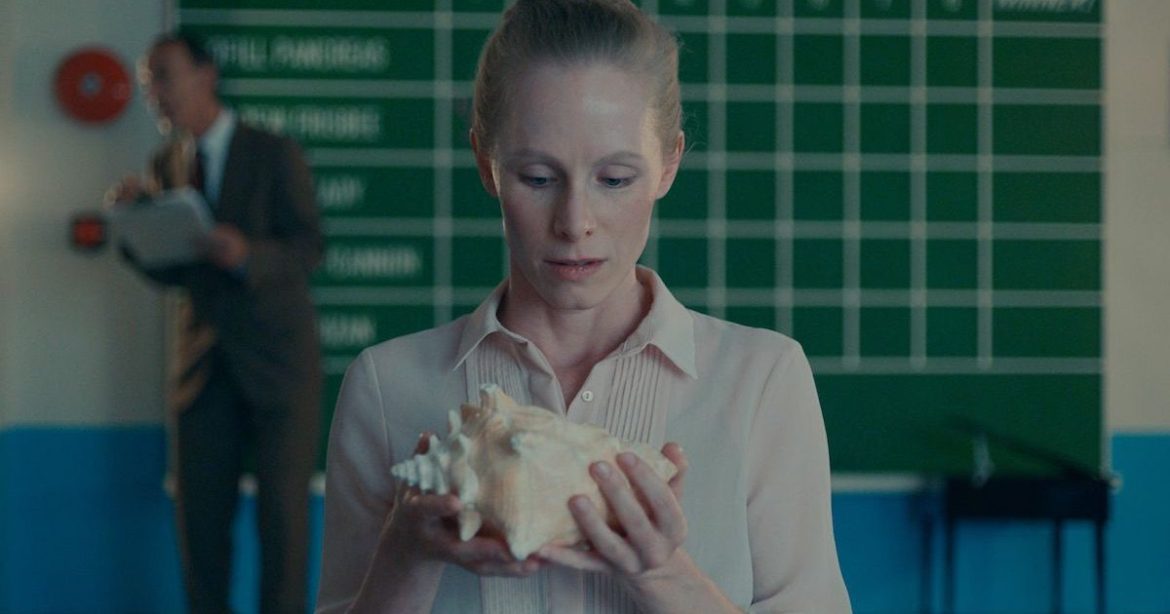 A mysterious social experiment brings a group of eccentric strangers together to compete for a prize. It’s the synopsis for many low-budget thrillers and dark comedies. And somehow, Stanleyville feels almost entirely divorced from the subgenre. You’ve seen the outline of Stanleyville many times before, but you’ve never quite seen what Maxwell McCabe-Lokos has in store for you.

Maria Barbizan (Susanne Wuest) feels completely dissatisfied with her life, to the point where she walks out on her job and family altogether. She’s then approached by a curious stranger sporting a suit and children’s backpack named Homunculus (Julian Richings), who claims she’s been selected to take part in a competition that will “probe the very essence of [her] mind-body articulation.” The winner also gets a habañero-orange compact SUV.

Naturally, Maria agrees (she’s got nothing to lose, after all) and quickly finds herself locked in a blue room with four highly peculiar individuals. There’s Felicie Arkady (Cara Ricketts), a cutthroat, no-nonsense woman who might actually cut some throats to win the SUV; Bofill Pancreas (George Tchortov), who works for a supplement pyramid scheme company and does nothing but guzzle protein powder and rip bicep curls. Manny Jumpcannon (Adam Brown), a drug-addicted performer who’s always coming up with another excuse for his failures; and Andrew Frisbee Jr. (Christian Serritiello), a crypto finance bro that’s obsessed with supply and demand and also people including the “Jr.” when they say his name.

The challenges are just as peculiar. The first of which calls for each contestant to blow up and pop as many balloons as possible in 60 seconds. Second, arrange a collection of odd objects in their correct order — also in 60 seconds. As you can imagine, the challenges only get more bizarre and long-winded from there. Homunculus never has a strong grasp on the game either, seemingly making it up as he goes along. Is this actually a contest? Is there actually a car? Or is there something more nefarious going on here?

In a fascinating but equally frustrating move, Maxwell McCabe-Lokos never fully clarifies the purpose of this experiment. Similar movies would try to distill these odd characters into clear and concise representations of greed, envy, and other illustrations of humanity’s worst impulses, but Stanleyville is perfectly happy keeping the puzzle unsolved. It loses a bit of steam in the process, but I can’t deny that I was transfixed by the experience. Ultimately, the conclusions taken from Stanleyville probably say more about the individual than the film itself.

For more information on Stanleyville and other films playing at the Fantasia Film Festival, check out their website.

Thank you for reading! What are your thoughts on Stanleyville? Comment down below!

Can I have the orange SUV?