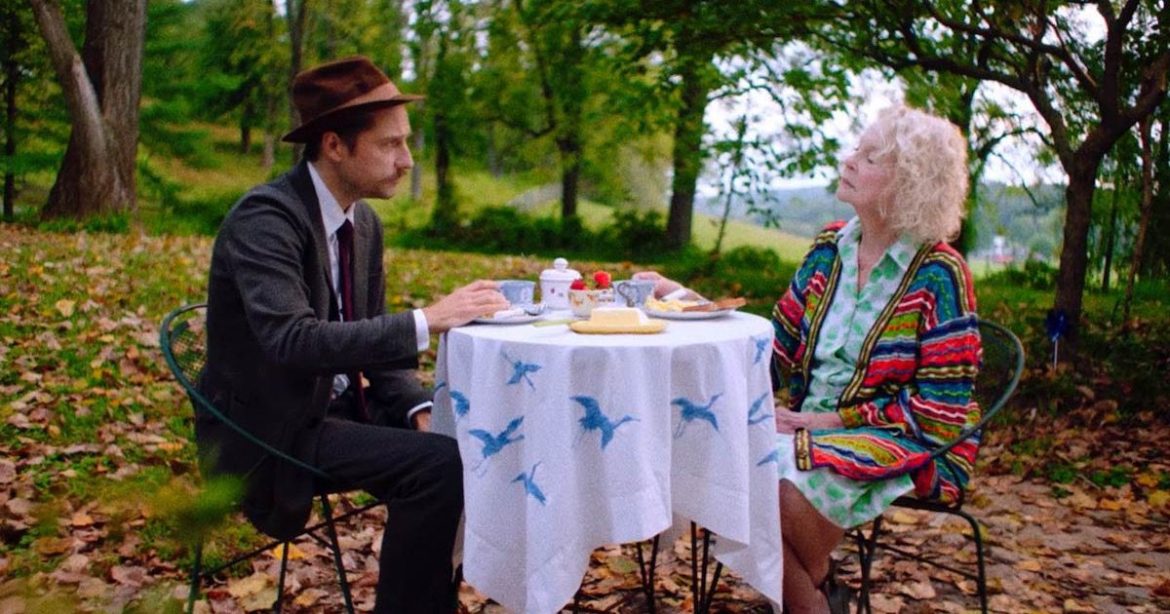 So many films present a dystopian future by isolating one particularly destructive idea and playing out its disastrous societal effects. Whatever the cause for the decline of civilization — whether it’s alien invasions, dictatorships, or viruses — most of the time it’s accompanied by a deadly serious tone. Which often makes sense — why greet the end of it all with a laugh? But that makes the films that approach such dystopias with unbridled goofiness all the more creative. In lieu of making its odd world utterly depressing, Strawberry Mansion takes a hilariously offbeat approach, examining our imaginations and their collective importance in fixing the real world around us in the process.

It’s the year 2035, and the government has started auditing our dreams. The wilder the dream, the higher the tax figure. James Preble (Kentucker Audley) is one of those auditors. Naturally, his dreams are extremely sparse, taking place entirely in a puke pink room. In his dream that starts the film, he stands in said room desperately looking for something to eat, only for Buddy (Linas Phillips) to open the door with name-brand soda and a bucket of fried chicken in hand. That’s it. Shortly after he wakes, James goes to the same chicken establishment and buys himself a bucket to munch on in solitude.

Nothing really goes on for James outside of work. He operates as if he might short circuit if he speaks above a certain decibel. A stiff breeze might knock him over too. His next task is to go to the titular strawberry mansion and audit the dreams of the eccentric Arabella Isadora (Penny Fuller) who’s years behind on paying her dream taxes. Annoyed, James sets to sifting through the pile of old VHS tapes that depict her unconscious mind but quickly starts to fall for Bella’s younger self (Grace Glowicki) as he’s overwhelmed with emotions from an imagination that greatly exceeds his. It’s then that James learns that a few nefarious parties are interested in Bella’s dreams as they might include information to a massive corporate conspiracy that threatens the very nature of dreaming. If all of this sounds self-serious, don’t worry, there’s a frog waiter playing the saxophone.

Strawberry Mansion takes a conceit that could be used for an overly fearful, downbeat episode of Black Mirror and turns it into a lark. It takes every opportunity to get weird, from an important plot point revolving around James needing to lick a strawberry ice cream cone to a man in a gully suit reading poetry. A constructed reality that would probably be overly sterile and desaturated if done on a larger budget with a different creative team is full of cotton candy colors and held together with cardboard paper and glue.

The kind of unreality Audley and Birney create is instantly endearing. Their future consists of a mishmash of past decades colliding together. James looks and acts like a hapless noir detective unraveling a conspiracy he has no power to stop; the analog nature of the dream recording devices is ripped right out of the 80s; the intense grain makes the film look like a 70s exploitation movie that was thrown in the dumpster and rediscovered years later. In between all those disparate influences are a lot of rubber animal masks and miniatures. The trippy if fake-looking effects and hazy editing only make the viewing experience more peculiar. Much of it looks obviously cheap, but it works wonders for this world that examines the heightened childhood nostalgia found in dreams.

Strawberry Mansions has an element of questioning what is a dream and what isn’t, but it more so focuses on recapturing a youthful imagination that could help make the true existence better for everyone. The tonal shift that occurs halfway through clashes slightly with the low-stakes delirium that precedes it, and the film becomes a little aimless as it stretches to cover 90 minutes, but it’s disarmingly touching in its weirdness. Even when it threatens to get lost in its surreal world, it snaps back to reality to remind you that the most important work is done when we’re awake.

For more information on Strawberry Mansion and other films playing at the Fantasia Film Festival, check out their website.

Thank you for reading! What are your thoughts on Strawberry Mansion? Comment down below!