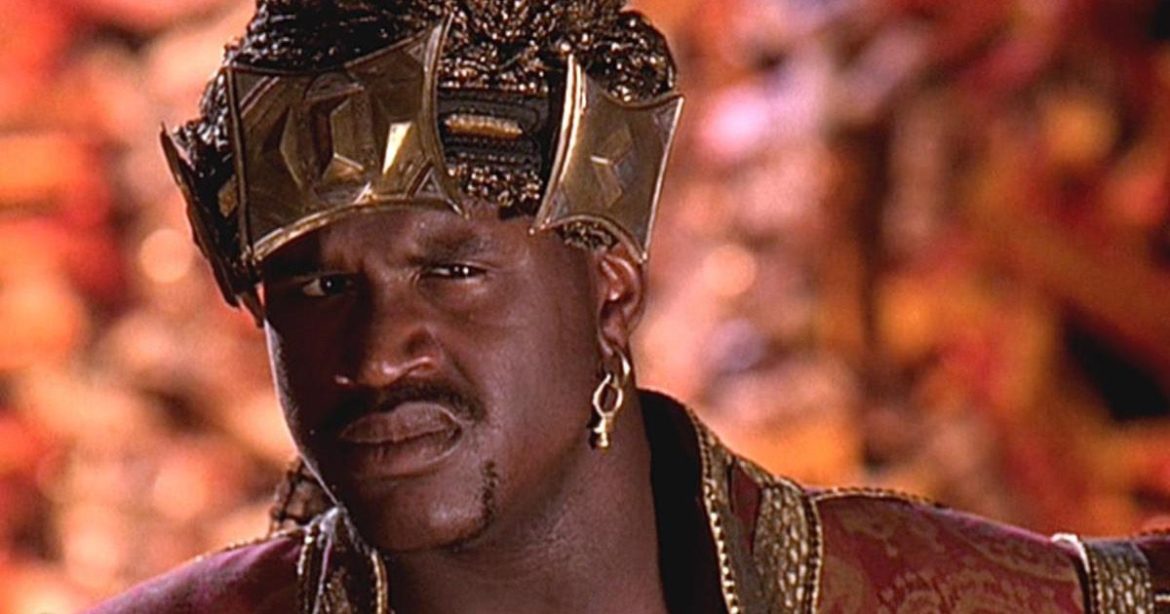 Kazaam is much like a cheese — it had the potential to age well, but someone kept it in their prewar apartment cupboard at a constant temperature of 80 degrees and now it just reeks. It may grow on you, but you can’t ignore the fact that it’s really bad.

Kazaam is about as goofy as it gets. It has all the elements that make Space Jam good but it fumbles them all into an incomprehensible mess. Shaquille O’Neal, playing the genie, Kazaam, just can’t comfortably fall into character. Our main hero Max (Frank Capra) is absolutely the most annoying kid ever. And everything is just a little too bizarre to grasp onto.

Kazaam makes you feel like you’ve been hit over the head and woken up in a McDonald’s ball pit; in other words, it’s chock-full of 90s nostalgia. I literally do not know how else to describe it.

I think Kazaam is for kids, but there are moments where I had my doubts. For example, Kazaam stalking Max — who wants nothing to do with him — around the city is pretty problematic. It becomes even more concerning that Kazaam wakes up in bed next to Max, at which point Max rightly calls him a pervert. The name-calling doesn’t prevent Kazaam from magically showering in front of Max though.

Those parts are played up for laughs, but there are some other parts that I find equally as concerning. During Da Brat’s performance (which practically drowns the viewer in 90s regalia), Malik (Marshall Manesh), the club owner, is entertaining an unnamed female client. Kazaam gives a cringe-worthy performance and then lifts his magic boom box, which sparks gold pieces everywhere, catching the eye of Malik. It also catches the eye of the unnamed female client who has what I can describe in no other way as an orgasmic reaction to the gold. That can’t be just bad acting (though I wouldn’t be surprised if it was) — the script had to have said something along the lines of, “The gold turns you on. Act like you are extremely attracted to the gold.”

It’s little moments like that that make me question the supposed wholesomeness of this particular movie.

Why Are We Rapping?

I’m going to show my youth a bit here, but I had no idea that Shaq had a short-lived music career. In a word, it was horrible (sorry to any Shaq fans out there). Kazaam feels like the wrong place to learn about his rap career, which seems cringy and completely lacking originality. He sounds like a middle-aged man who heard a group of guys freestyling on the street and decided to take a crack at it.

It gets worse when Max starts to rap with Kazaam. There’s this whole random musical breakdown where Kazaam tells how he became a genie and Max interjects with lame punchlines. I had to double-check that I wasn’t watching a musical when this happened. No, Kazaam is not a musical. It just has its random moments of cringy rapping to add that little extra spice.

Kazaam is really good at opening up doors to different plot lines, but it’s bad at following through on those lines. For example, what happened with Max’s bullies? Did they continue to pick on him or did they leave him alone? Did that one kid who looks like a mini Eminem have a successful rap career?

Then there’s the whole situation with Max’s friend. What friend, you may ask? EXACTLY. Max is shown to have a friend at school, but we never learn his name and he is not integral to the plot at all. I’m pretty sure the only line he has is asking Max if he’s okay after getting roughed up by some bullies. Either give the kid a friend or don’t, but don’t make him a weird background character.

I also feel like Kazaam’s background is pretty skipped over and probably should have been explored more. We learn everything about him from a poorly-written rap. I want to learn more about where he came from and how he feels about where he is. It felt like he wasn’t as well-developed a main character as I would have liked. Then again, not quite sure how much I was expecting from a movie where Shaq slam dunks a man’s head into a vent.

Who Are We Rooting For?

There is no one in this movie worth rooting for except maybe the fireman that Max’s mom is going to marry. Everyone in Kazaam sucks. If I met any of them in real life I would hate them and avoid them at all costs. They have got to be some of the most dysfunctional people ever put in a children’s movie.

Let’s start with our main man: Max. He sucks. He’s a brat and he’s rude to everyone for really no reason. A genie literally appears to him and offers him three wishes and he berates the man and blows him off. He never even knew his father and yet seems to have some sort of connection to him, even after meeting him and realizing that he’s a grade-A jerk. He gives his mom’s potential husband crap for no reason. Max is the reason why people hate kids.

Then there’s Kazaam himself. The man is a creepy stalker. He can stop rhyming but for most of the movie his dialogue is spoken in laughable Dr. Seuss fashion. He leaves behind Max (though I can’t blame him) which seems like a big no-no for genies, so it’s obvious he doesn’t care for rules or responsibility much. Honestly, he doesn’t seem like a trustworthy guy — more creepy than anything.

If Kazaam had been from the perspective of the firefighter, I would have enjoyed it more. Instead, I got creepy genie and bratty kid.

Thank you for reading! What are your thoughts on Kazaam? Comment down below!

Harry Potter Should Have Died in ‘The Sorcerer’s...