80s cheese served with a side of thoughtfulness. 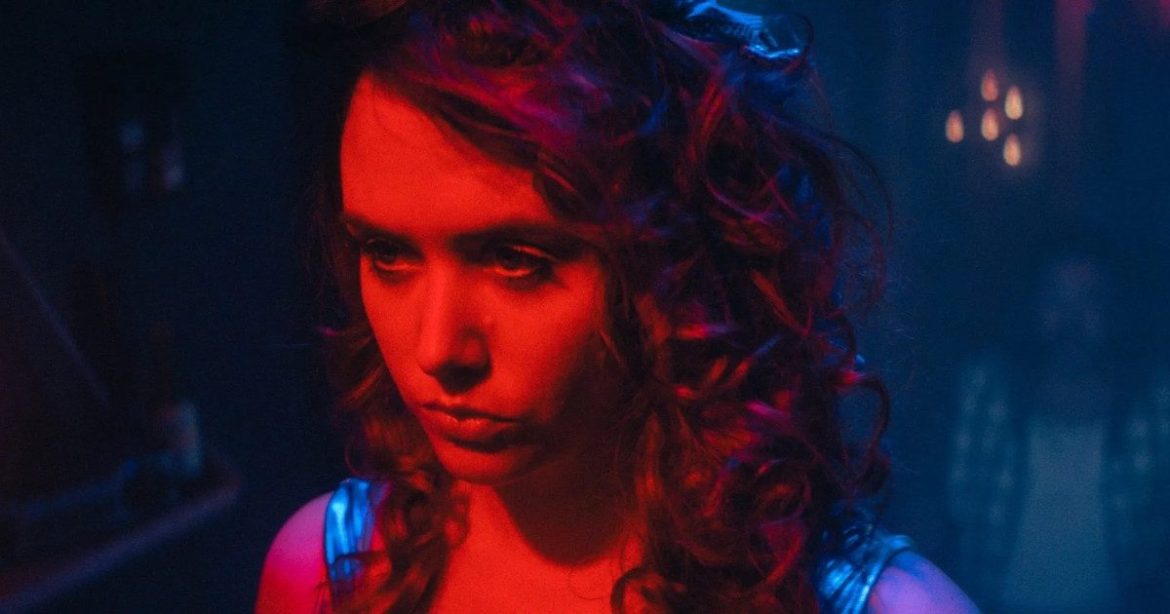 It’s been a boom time for 80s nostalgia over the last few years. Nowhere more so than in the horror genre. It gives you instantly recognizable visual cues to make the audience comfortable and saves you from having to write around your victims calling for help on their cell phones.

The 80s nostalgia train hooks up another car with Revealer, the feature debut of director Luke Boyce. Co-written with comic book authors Michael Moreci and Tim Seeley, this quick, slick horror uses the apocalypse as a jumping-off point for all manner of discussions on religion, women’s rights, and what items are best to hit monsters in the head with.

In 1987 Chicago, Angie Pitarelli (Caito Aase) is having an unsuccessful day at her peep show job, not least because of the religious “moral majority” protesters outside the building, with the very vocal Sally (Shaina Schrooten) among their number. Luckily the days of rabidly religious types angrily protesting with crazy placards is a relic of the Reagan years and not an American problem anym… oh. Oh dear. Oh dear, oh dear. Nevermind. Forget I said anything.

All the yelling and sign-waving isn’t getting the customers in and certainly isn’t helping Angie make any money in what is a tip-focused job. Her day doesn’t get any better when, shortly after the owner Ray (Bishop Stevens) goes outside to remonstrate with the Do Gooders, all hell breaks loose, literally.*

The Earth shakes, zombies run amok, and a terrifying noise makes the building tremble. This is explained by Sally as being the first of the seven trumpets of Revelations. These signify… bad stuff. There’s very little fun stuff in Revelations, generally. Not like that Leviticus bit that advises getting stoned before you have sex with another guy.

… I’m being told I read that wrong, oh well, #noregrets. Anyhoo, where was I? Oh yeah, fire, brimstone, the dead walking the Earth, all that stuff. And worst of all for our protagonists, the demon Asmodeus who has even more of a thing about lust than the protesters. Can Angie and Sally make it out of the strip club before Asmodeus and his demon snake things get them?

The first thing to say about Revealer is that it does have enough of the late-night trash horror movie content if that’s what you’re looking for. The zombie makeup is solid, the dimly lit corridors are ideal for jump scares and the camerawork is just what you need for this sort of thing, slightly too close so it’s claustrophobic and there’s possibly something just out of view is about to do something horrible.

The second thing to say is that the writers are better than just late-night trash horror movie content. They’re experienced, award-winning guys and Revealer is the rare example of a positive bait-and-switch. It looks like an 80s cheesefest with gratuitous T and A and rubber monster suits but, one short (clothed) dance segment early on aside, it’s a much more contemplative piece… with a rubber monster, admittedly.

They’re helped to no end by some great performances from the relative newcomers Aase and Schrooten. The film is almost entirely a two-hander so they have a lot of weight to carry and they do it with aplomb. Aase’s Angie is sassy, funny, kickass, and has an affecting backstory. Meanwhile, Schrooten imbues what could have been an excessively annoying character with real humanity. The actors have some great back and forth as their Odd Couple fighting has to learn to take a backseat to cooperating on getting out of the club (and its network of tunnels leftover from bootlegging times) in one piece. They both do an excellent job of getting you to really root for them.

Revealer probably won’t win a bunch of awards. But that’s fine, it will entertain you if you’re looking for a quick horror fix with some added intelligence. But I’d be surprised if the makers and cast don’t go on to win a bunch of awards later on. It’s a great calling card feature for all concerned.

*Anyone writing about something End Of Days related is legally obliged to use “all hell breaks loose.” I don’t like it any more than you do.

Thanks for reading! What are your thoughts on Revealer? Comment down below!