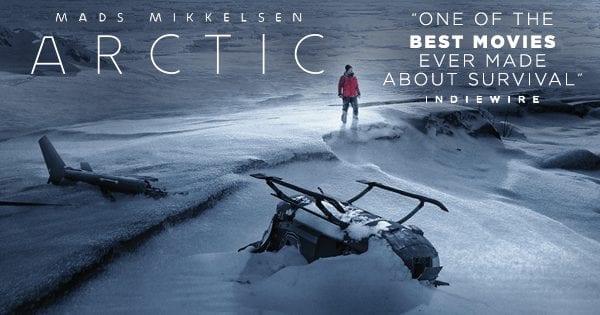 Polar and Arctic will undoubtably become the source of much confusion among audiences, despite being completely different films. While Polar is an over-the-top action film (and from what I hear, a bad one), Arctic is a grounded and chilling tale of survival against all adversity.

Overgård (Mikkelsen) is a plane crash survivor stranded in the Arctic, about to receive his long-awaited rescue. However, after a tragic accident, all hope seems lost. After saving the lone survivor of a failed rescue mission (Thelma Smáradóttir), He must make a choice; remain in the relative safety of his camp or embark on a deadly journey through the unknown for potential salvation.

Arctic is written and directed by L.A based Brazilian filmmaker, musician and Youtuber, Joe Penna and co-written by his producing partner, Ryan Morrison. Penna is better known as his online alias, MysteryGuitarMan and his Youtube channel of the same name has garnered over 2.7 million subscribers and over 400 million views. He has also directed three short films and a number of commercials.

Arctic is Penna’s first feature film, debuting at the Cannes Film Festival in 2018. The Cannes premiere was met with a 10-minute standing ovation.

The film was shot on location in the Icelandic highlands over a gruelling 19 days. Constant, drastic changes in weather, including snowstorms and freezing rain, made keeping continuity a herculean task for the crew.

The Brilliance of Arctic Lies in its Simplicity

Penna does away with the clichés of the survival genre and creates a grounded, brutal and realistic film, free from overwrought drama and overblown stakes. Arctic has a simple story with a streamlined narrative framework of getting from point A to point B, allowing the focus to hone in on the treacherous journey of Mikkelsen’s character. This very stripped back, unembellished approach delivers a true sense of purity and honesty, fully realizing the true terror of Overgård’s situation.

Although the narrative and structure are fairly basic, Arctic is in no way a dumb film. There are no stupid character decisions for the sake of a plot device or manufactured moment of tension. Every obstacle that Overgård must overcome and every mountain he has to climb (literally) never feels disingenuous, unnatural or overly tragic and they do not pile up to the point where it becomes comical or melodramatic.

The picturesque cinematography from Tómas Örn Tómasson perfectly captures the simultaneous beauty and horror of the Arctic. Beautiful wide compositions of icy vistas and sweeping landscape shots of Overgård traversing the tundras; a minuscule coloured speck in a vast sea of white, build upon the film’s ominous, foreboding atmosphere and established sense of crippling isolation and hopelessness. 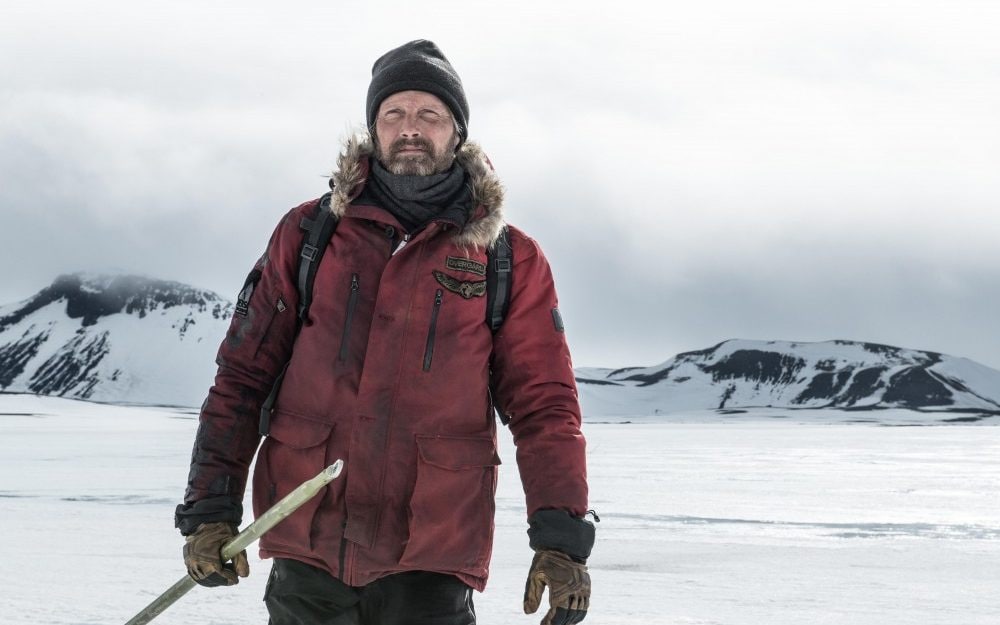 Isolation survival films are often made as a performance showcase for an actor to show off their range and get the attention of the Academy (see Tom Hanks in Cast Away). Because Overgård is such a stoic, almost silent character that Penna has described as “a stencil of a person”, an actor with gravitas, physicality and a commanding screen presence is required to bring humanity to such a role. Luckily, they cast the superbly talented Mads Mikkelsen.

Overgård is a purposefully underdeveloped lead. When we first meet him, we know almost nothing about him. Who he is, how he got there and how long he has been stranded are all mysteries, and they remain mysteries until the credits roll. There are no flashbacks, no photographs of a happy family or any additional, cliché motivation of any sort present in Arctic. Overgård is not on a quest for meaning, belonging or redemption. He is motivated by humanity’s most primitive instinct: survival.

Dialogue is sparse and thankfully, there is no clunky interior monologue delivered via expository voiceover narration. Overgård is a character that is defined only by his actions, and this is where Mikkelsen truly shines. The film is heavily reliant on his physicality, especially his facial expressions that convey more than words ever could. One moment in particular, Mikkelsen excellently captures Overgård’s feelings of despair, desperation, determination and fortitude all with a single visage.

A Portrait of the Unbreakable Human Spirit

Arctic is so much more than your average parable of man versus nature. It is an insight into the endurance of the human spirit under the most extreme of circumstances. Whether it be lugging cargo up a steep snowy hill, falling into icy crevasses or fending off vicious polar bears, Overgård’s courage and bravery never wanes. Even as his chances of survival begin to rapidly diminish, he perseveres, maintaining his selfless and altruistic sensibility.

He is motivated only by his will to live and the will to keep his fellow comatose survivor alive. It is these scenes with the helicopter crash survivor (particularly in the third act) where the film’s stunning display of altruism is most palpable. She is the only person Overgård has interacted with in weeks, months or perhaps even years and immediately makes it his duty to protect her, always putting her first. The selflessness of his actions speak volumes and is what solidifies Overgård as a real hero, displaying true humanity in a freezing, desolate plain where there is none.

Arctic is an incredibly ambitious and impressive debut from Joe Penna, and a restrained but brutally honest tale of a man testing the strength of the human spirit. A simple film in terms of plot and structure, but is a deeply meaningful and life-affirming story of courage, benevolence and heroism in spite of the dwindling chances of survival. Mads Mikkelsen carries the entire weight of the film on his back, giving an outstanding performance and bringing emotional depth and humanity to a very basic character.

Arctic is one of the best films of the survival thriller genre. It is a very intense and very powerful film with a lead that any audience will resonate with. Overgård is sure to inspire audiences to take a bit of his courage with them when they leave the cinema. 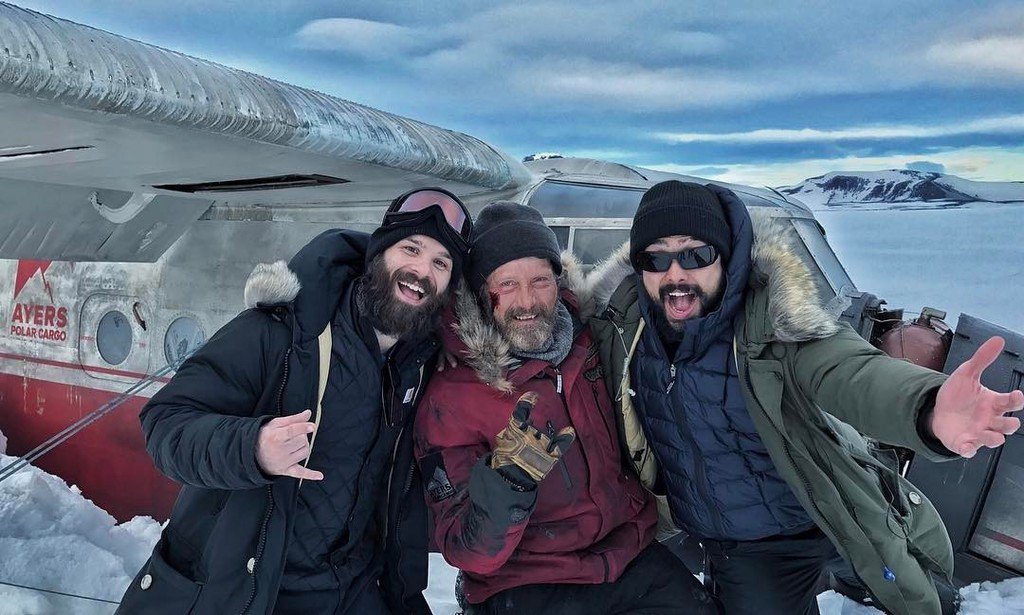 Thank you for reading! What are your thoughts on Arctic? Comment down below!

Sorry, too much bogus stuff!
Ice fishing (with what, ten jigs?) in what seems to be a crater? And back at his plane, no source of heat, so somehow he defrosts frozen char and eats sushi? Can only drink cold water from his ice-fishing holes, can’t heat it. Yet on his trek hauling the sled, he fills a thermos with snow and puts it next to his body to thaw it? (Ration of snow to water is 17 to 1, and simply can’t be converted this way.)
His plane obviously not well supplied – unlike the helicopter that crashes which has a big stove and some weird looking food. And skis. Good idea – but only one pair. And a rescue sled?
A first aid kit with a stapler for stitching lacerations? That’s a bit beyond belief.
Arctic? I was guessing somewhere near St. Elias Range in Canada, or Baffin Island, or Norway – and finally maybe Iceland. The latter turned out to be where much of the footage was shot, it seems.
Polar bear in the middle of nowhere? Twice? Out of his/her native habitat.
five years in Alaska, 50 years of mountaineering and expeditions means that a movie like this is bound to disappoint. But, like Redford’s film “All is lost”, fun to watch to count the number of “what’s wrong with this picture” items.
Great acting, though.

Need to watch this!

This seems very artsy more than anything else to me.