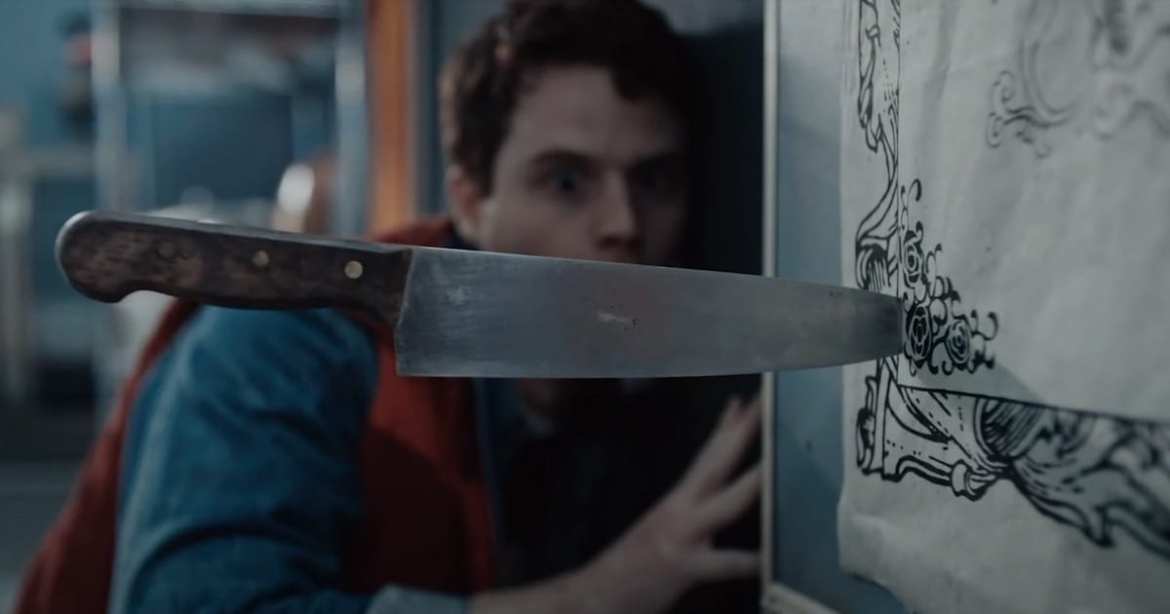 Ahh, the 1980s. Season of mixtapes and mellow Rubik’s cubes. Ripe for nostalgia adjacent movies and TV like The Goldbergs and WW84, they’ve recently been a goldmine for horror makers. Boosted in particular by the success of Stranger Things, there’s been a slew of 80s set scares from The Babysitter to It and they all floated, more or less, not to mention that the iconic 80s bogeymen Freddy, Jason, and Pinhead never seem to stay dead for too long. (There’s another Hellraiser in production on top of the TEN movies already in that franchise.)

A decade with a clear visual style, not to mention no pesky cell phones getting between a knife-wielding maniac and his virginal prey, it’s not hard to see why filmmakers are so keen to revisit them. Writer/director Cody Calahan has taken his turn at-bat in the 80s horror world with Vicious Fun and has knocked it out of the park.

Joel (Evan Marsh) is a writer for ‘Vicious Fanatics’, a horror magazine. He has some definite thoughts on what makes for a good movie killer. After having a little too much to drink, embarrassing himself in front of his crush Sarah (Alexa Rose Steele), and falling asleep in a restaurant’s back room, he wanders into a support group/networking meeting of people who think he’s a late guest. Unfortunately for him, these people are all serial killers. At least Joel’s horror background gives him a base to build a character on to bluff his way through the meeting…for a while.

Joel is a charming lead who’s realistically dorky. Hopeless enough to be the damsel in distress (damoiseau is the male term for that, don’t say you don’t learn anything here) but not annoyingly weak.

The attendees of the murderers’ meeting cover a broad selection of horror types. For your “big, relentless murder dude” a la Halloween or Friday The 13th, we have Mike, played by Robert Maillet, who you may remember as the big, violent monster in 300, the big, violent guy in Sherlock Holmes, or Sluggo in Deadpool 2. (Who was also a big, violent guy.) When you’re a wrestler turned actor, it’s a handy niche to occupy.

Sean Baek plays Hideo, your cannibal gourmand for the evening. Julian Richings’ Fritz is a creepy doctor type who would be quite terrifying enough even if he didn’t also have a clown thing going on. David Koechner is a CIA/Military type who’s a little too keen on the deadly side of his work, and Ari Millen is a creepy/stylish Patrick Bateman-esque yuppie monster whose sights are set on Sarah.

Rounding out the meeting is the badass-looking Carrie (Ari Goldfarb) who’s all eyeshadow, fingerless gloves, and attitude. She might be a little more on the side of the angels than the rest of the group.

It’s a good setup and the makers have fun with the almost sitcom-like idea of a normal-looking meeting with people discussing in a pedestrian manner things like body disposal or cooking methods for human kidneys. Koechner in particular is obviously a hugely experienced comic actor and it’s clear to see in the ease with which he can riff on utter madness in a comfortably deadpan way.

Joel tries to fit in, with his nerdy enthusiasm for horror almost overcoming the terror of being the hen in the foxhouse, as it were. But eventually, Vicious Fun switches gears from “comedy with a horror tinge” to “horror with a comedy tinge” as the pack of serial killers starts a hunt for the normies, and the normies defend themselves in an increasingly gory style. The makers certainly don’t scrimp on the blood and guts. And true to the 80s aesthetic, it’s practical effects all the way. Always a winning move, for proof of that, compare and contrast the 1982 and 2011 versions of The Thing. The 80s style covers all the bases, most successfully with the soundtrack. Steph Copeland does a first-class job of aping John Carpenter’s synth work.

What’s notable is that for all the 80s touches — the neon lighting, the synthwave music, the fashion — Vicious Fun never strays into parody. Well, maaaaybe with the extremely hopeless cops that show up and don’t help anyone, but otherwise, it plays like a very good horror movie made with the techniques and style of 1983. The affection for the originals shines through.

Vicious Fun is a cult classic in the making that’s going to be a future highlight of the CVs of everyone involved. One of those, “They did that Vicious Fun one. …Oh, it was a cool one you should see it” movies. Highly recommended.

Thanks for reading! What are your thoughts on Vicious Fun? Comment down below!

[…] Graveyard Rats is based on a short story by Henry Kuttner, published all the way back in 1936 in Weird Tales. The guest director this time is Vincenzo Natali, known mostly for the cult classic, Cube. […]