40 Years Later: The Legacy of ‘Star Trek II: The Wrath of Khan’ 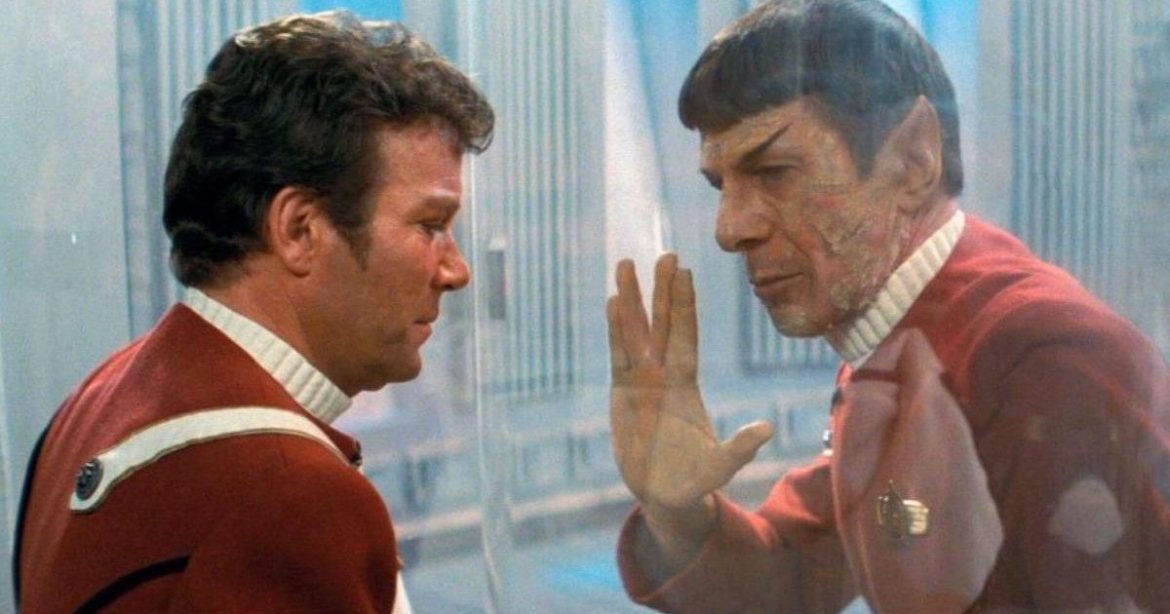 The most critical scene of Star Trek II: The Wrath of Khan comes very early in the film. It is Admiral James Kirk’s birthday, and he is spending his time in his room surrounded by a collection of antiques from bygone eras in human history. He receives a visit from his friend, Leonard “Bones” McCoy, accompanied by Romulan Ale, to wish him a happy birthday. The two then have a conversation about aging and legacy. Kirk is obviously deeply unhappy with his position as an Admiral, and still spends his time dreaming of his place among the stars. McCoy warns him not to become a part of his shelf of antiques.

What is often overlooked about Star Trek II: The Wrath of Khan, is that it is a deeply melancholic film. There is a pondering sadness to it that director Nicholas Meyer taps into that hasn’t been captured by a Star Trek film since (even when they have straight-up ripped this movie off trying). I have speculated on this a lot, and I believe the reason these efforts have been unsuccessful is because the first six Trek films featuring the cast of The Original Series are really unlike any series of blockbuster films. In modern-age blockbusters, we always see a cast that makes it look like the results of the 20th century Eugenics Wars went in the opposite direction. In this film series, we have schlubby, middle-aged people returning to their roles ten years after their prime and the cancellation of The Original Series. It’s one of the reasons this series holds so much charm for me, and why even the entries widely regarded as less than (Star Trek III: The Search For Spock and, of course, Star Trek V: The Final Frontier) hold a special place in my heart.

I think what sets The Wrath of Khan apart from the other great entries in the series is how they lean into this. This is really a Kirk-centric film, and while I love Star Trek: The Motion Picture (as in it is tied with Star Trek IV: The Voyage Home as my very favorite Trek film), this film does a far better job at showing Kirk’s dissatisfaction with his promotion to Admiral. At this point in his life, Kirk is grappling with his legacy and his mortality. He is head-on facing the internal notion that he is a has-been. However, the film also raises the question of how many times Kirk can cheat his inevitable death. He did it on a seemingly weekly basis on his historic five-year mission covered in TOS as well as the criminally underrated Animated Series, but more recently in the Trek timeline with the Enterprise crews encounter with V’ger in Star Trek: The Motion Picture.

This brings us to undoubtedly the series’ greatest villain: Khan Noonien Singh. First introduced in Season 1, Episode 22 of The Original Series, the infamous genetically-enhanced superhuman who caused the death of millions in his unsuccessful Eugenics Wars on Earth in the 20th century, but proved a personal threat to Kirk and the crew of the Enterprise when they discovered and awoke the crew of the Botany Bay on their five-year mission, resulting in their marooning of Khan and his crew on Ceti Alpha V. Khan is discovered early in the film on the wasteland remains of Ceti Alpha V which was knocked out of its orbit by the explosion of another planet (such a cool science fiction concept). Khan captures Chekov and Captain Terrell of the USS Reliant and takes over the starship, hellbent on a revenge path of James T. Kirk who marooned him on the planet all those years ago.

Khan proves the perfect foil to Kirk, which is what makes him such a powerful villain. Where Kirk will do anything to ensure the safety and well-being of his crew, Khan is constantly ignoring the pleas of his crew to go their own way and find their place within a massive universe, free of the long grasp of the United Federation of Planets. Where Kirk is calculated and precise with his orders as Captain of the USS Enterprise, Khan is chaotic and messy to his crew on the stolen USS Reliant. Khan proves to be a formidable threat for Kirk who represents a Federation bound to a code and rules as he must enter a conflict with a foe who does not abide by any set of ethics or rules.

In the opening scene of this film, we see (for the first time in the franchise) the infamous Kobayashi Maru test. The test displays a scenario that simulates the crew on a rescue mission to the titular ship. Here, they are ambushed by Klingon Birds of Prey that uncloak and destroy your ship. The purpose of the test is to see how an individual handles themself in a no-win scenario. Kirk is infamously the only Starfleet cadet to ever beat the test when he reprogrammed the test because he does not believe in a no-win scenario. This scene lays the groundwork for the most infamous scene in Star Trek II: The Wrath of Khan: the death of Spock.

I vividly remember the first time I saw this scene as a young child, and despite the reassurances by my parent that Spock returns in the next film, I am still shaken by this scene. This is a bold claim, but I think Spock’s death is the most impactful death of any fictional character that I can think of (perhaps due to how scarring it was that first time all those years ago). His sacrifice to restore the warp core at the expense of his life from radiation poisoning falls in line with his Vulcan mindset of a lifelong commitment to logic. However, Leonard Nimoy’s physical performance in the scene is heartbreaking and beautiful. The way he adjusts his uniform when he first stands to look presentable to his captain will never not hurt me. In this emotional climax, Kirk has to reckon with his no-win scenario and mortality head-on. It is here where as a viewer, you see how perfectly the film has set up this tragic moment. Spock’s simple explanation, “The needs of the many outweigh the needs of the few,” is as perfect a line as I can imagine him delivering. William Shatner is by no means the greatest actor, however, the way he performs this scene and is able to match Nimoy makes this one of the most memorable moments in the entire franchise.

Star Trek II: The Wrath of Khan has, like the character of James Tyberius Kirk in his fictional universe, created a legacy that is timeless. It’s why people consistently reference it as THE definitive Star Trek film, it’s why JJ Abrams unsuccessfully attempted to rip it off in 2013’s Star Trek Into Darkness (in my opinion, the worst of the entire franchise), and it’s why it continues to be an iconic, culturally significant, and powerful experience forty years after its release.

Thank you for reading! What are your thoughts on Star Trek II: The Wrath of Khan? Comment down below!