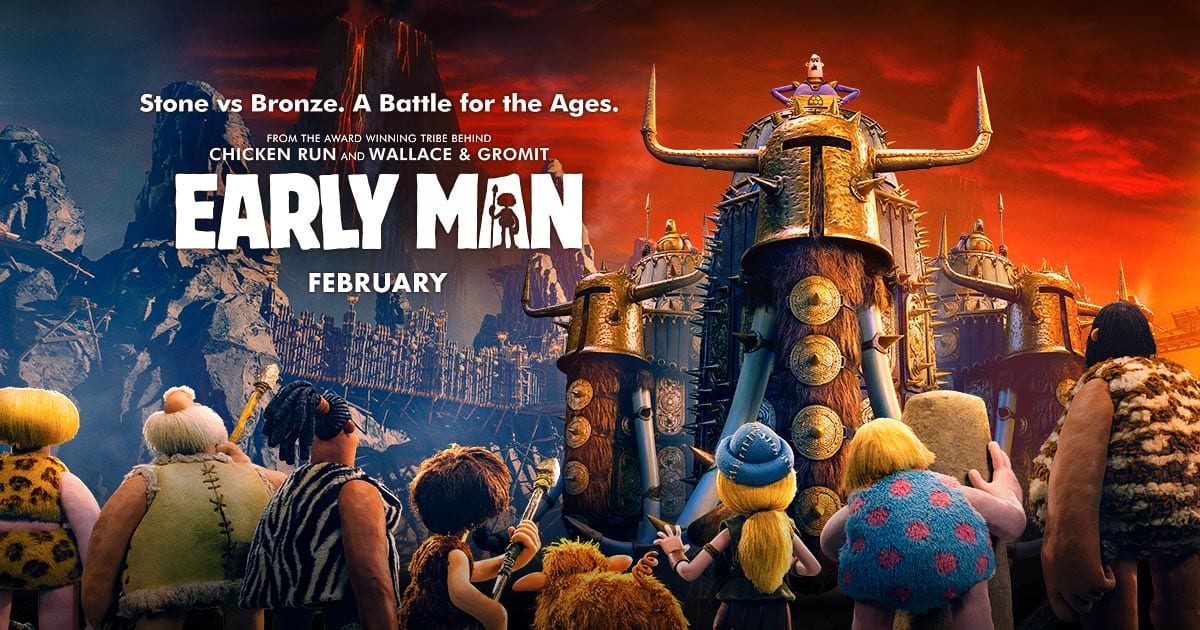 Counterprogramming is becoming very important to studios trying to make a mark at the box office.  With Black Panther dominating the box office this weekend, Early Man is looking to take control of the overflow traffic en route to a successful weekend.  The following review will be spoiler free. 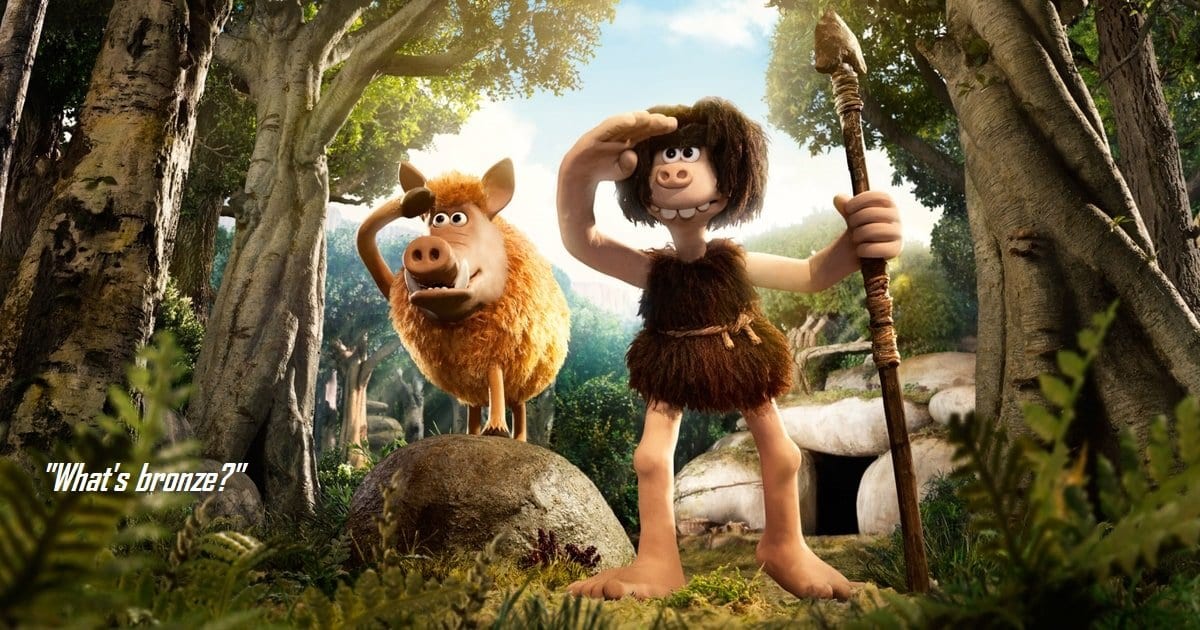 Shortly after the dawn of man, our ancestors quickly assembled to create one of the greatest games known to man: soccer (or football, depending on your native country).  But, the tradition was forgotten over the centuries, leaving young tribesmen like Dug (Redmayne) without a strong sense of purpose as they began to aimlessly hunt rabbits and other small creatures.

However, men from the Bronze Age invade Dug’s village for the ore in the Earth.  Threatening to take their land away for good, Dug challenges Lord Nooth (Hiddleston) and his men of bronze to a soccer match with the tribe’s land as the prize.

After making their debut in stop-motion animation with Chicken Run back in 2000, Aardman Animation has been the leader of claymation in the industry.  The art form has become a dying medium of sorts in the last few decades due to its difficulties during production (moving those clay figures inch by inch for each frame is unbelievably arduous).  Studios like Aardman have slowly gone away, making every film that releases important for the animation form.

Other stop-motion animation studios such as Laika (the makers of Coraline and Kubo and the Two Strings) still exist, so you won’t have to worry about a sudden extinction of claymation.  But, they’re never incredibly popular at the box office.  In fact, Aardman films are never big hits in the states.  Theses films do most of their business overseas in the U.K. and other European countries.  Obviously, these films make some money (Aardman wouldn’t be in business otherwise), but the margins on these films aren’t exactly massive, making a big loss a crucial misstep for these studios.  If you want these types of movies to continue, you better hope that Early Man and every subsequent films performs well with audiences.

Aardman’s animation style is in full effect with Early Man as the film includes some of their best work as a studio thus far.

It’s a weird balance to work with claymation of this style.  On one hand some objects look very realistic, containing a nice amount of depth for a well-rounded picture.  However, the people and animals that inhabit the screen are so unbelievably cartoonish looking.  Just looking at the main character of the film played by Eddie Redmayne, you see stringy, oddly real-looking hair matched with a goofy, clay face.  It’s an inherit disconnect that might immediately turn off some viewers to Early Man, but it’s a refreshingly odd visual aesthetic that sets up the tone for the entire movie.

Everything about Early Man is quirky.  From its animation to its story, Early Man is like a Wes Anderson movie that gave up on trying to become a profound piece of artistry early on in the production process.  This movie is ridiculous in just about every single way.

Early Man Has a Self-Reflexive Brand of Humor that Really, Really Works

The animation is combined with a brand of comedy that is best described as “off the rails.”  The film is delightfully British, delivering a bunch of stupid and sneakily smart jokes that’ll have your sides aching from laughter.  The humor almost plays out as if someone just blurted out a bunch of nonsense in the middle of a script meeting and those remarks somehow made it into the final draft.  From giant ducks to meteorites as soccer balls, literally nothing is off-limits in Early Man.  When the big bad soccer team is called “Real Bronzio,” you know you’re probably in for a good time.

However, an animated tale is nothing without solid voice work.  Luckily, Early Man crushes it in that department.  Just take a look at these behind-the-scenes clips:

From Eddie Redmayne adopting the posture of his prehistoric character to Tom Hiddleston laughing as he’s getting a massage, these actors are loving the material, and you can feel it with every word.

The clear standout is Tom Hiddleston as Lord Nooth.  As a bronze-loving, wimpy, eccentric British man, Hiddleston is chewing the scenery in the best way possible.  He has an incredibly hammy accent that never fails to get a laugh.  He’s a sniveling, silly, and weak leader that is never an opposing threat, but he’s always hilarious.

Another Generic Sports Film in a Different Skin

The silly nature of the film is great, but the story isn’t exactly the best idea to ever come out of Aardman Animations.  Watching prehistoric people learn to play soccer and interact with people of the Bronze Age is definitely good for some entertainment, but it loses some steam as the actual plot takes over.  Building towards a soccer match between cavemen and so-called sophisticated beings, Early Man devolves rather quickly into a generic sports movie filled with training montages.

In essence, Early Man is the classic underdog sports story that is merely heightened to include prehistoric elements.  A ragtag group of rebels must come together and learn how to work as a team.  Sound familiar?

As the main story actually unfolds, the kinetic energy of the first half of the movie begins to wane.  Unfortunately, the whole film becomes somewhat stale as a result.  There’s enough comedy included in the story to keep the viewer moderately entertained.  But, there’s no matching that feeling of delight from the first act or so.

From the people who made Chicken Run, Wallace and Gromit, and Shaun the Sheep, you should expect a little more than just a band of misfits attempting to take down an overpowering opponent.

Light and fluffy, Early Man contains more of the offbeat comedy that we’ve come to know from Aardman Animations, blending it with a bizarre storyline that mashes different time periods together.  Early Man prides itself in having smartly stupid comedy, shocking you with the amount of disarming humor that it contains.

Although it relies on numerous clichés and isn’t quite as engrossing as some might desire, Early Man is perfect as a matinée at the theaters and is very pleasant even if it’s somewhat disposable. 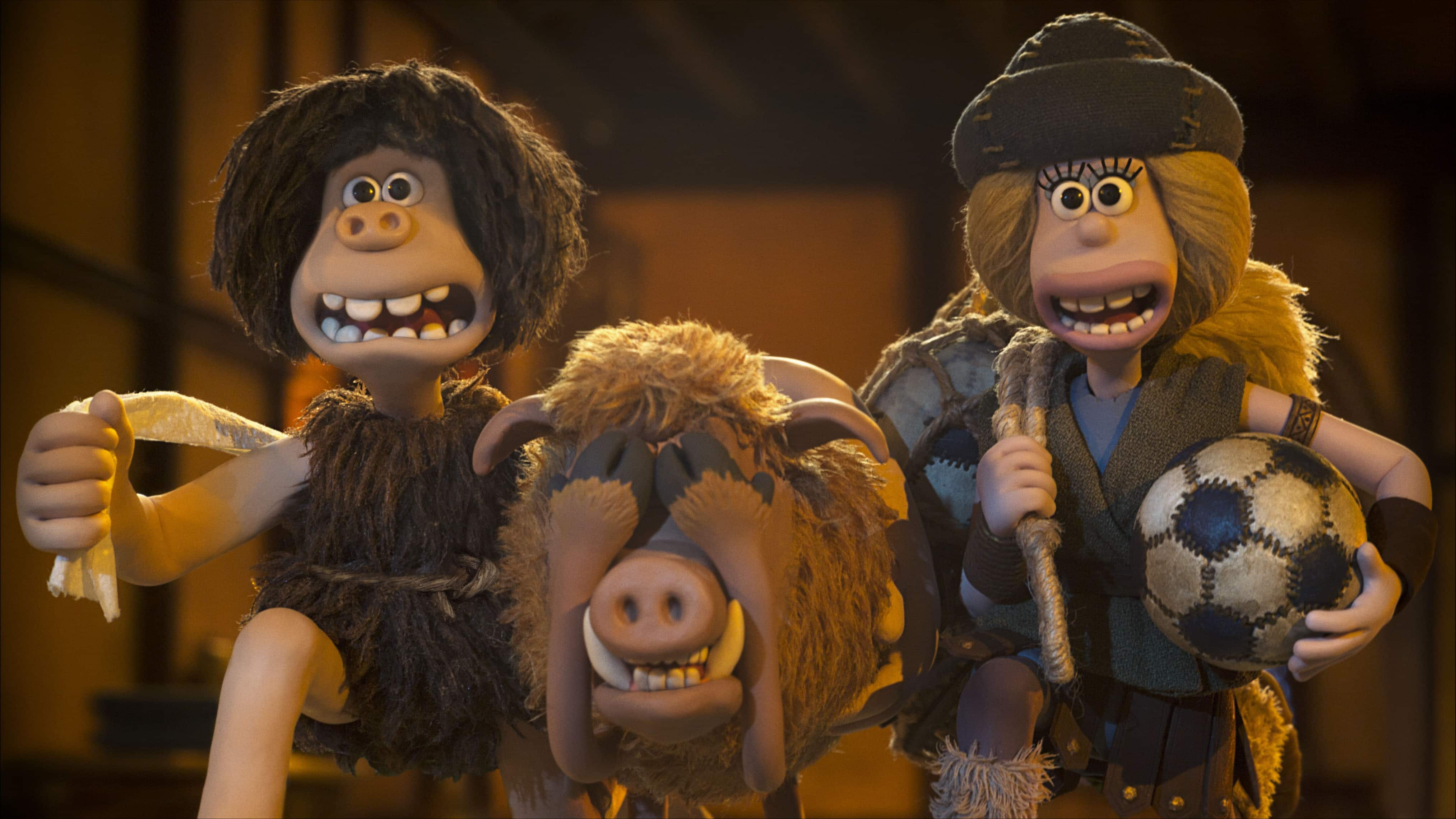 Thanks for reading!  What are your thoughts on Early Man?  Comment down below!

I wasn’t that interested in it, but I still plan to see it.

This one is a solid watch on HBO or something like that. It won’t blow you away, so if you’re not too interested you might wanna wait until then!

I will go check out this movie. I enjoyed #Wallace&Gromit #Films.