Claire Denis' latest is modest by design, but still packs an emotional wallop. 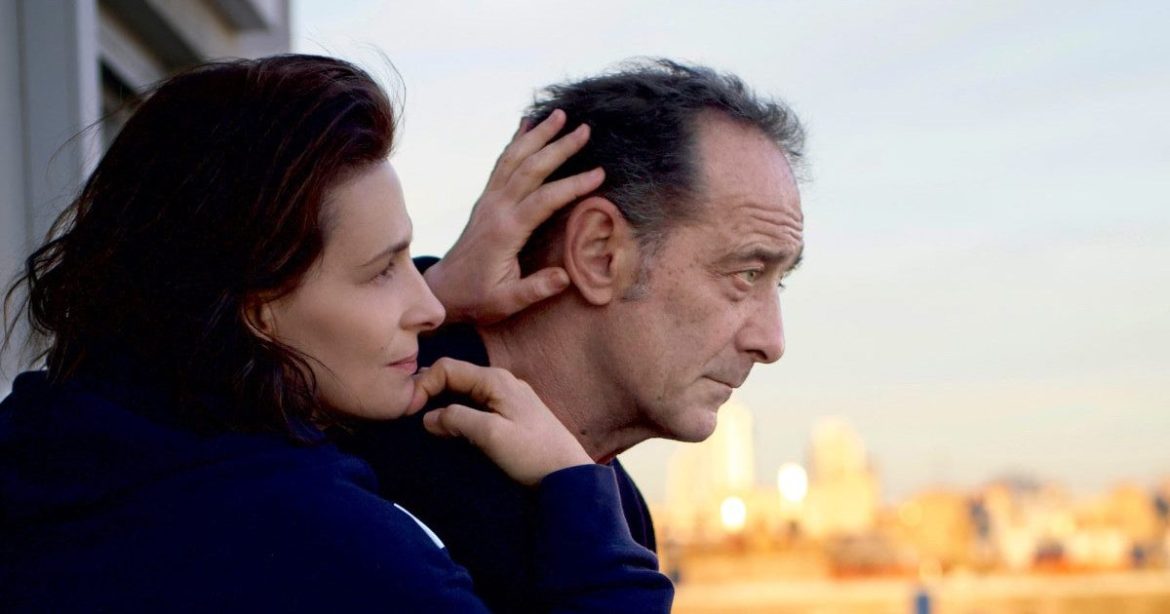 Leave it to Claire Denis to create the best representation of the pandemic onscreen yet. There are no Karens yelling over masks, no contagion spreading like wildfire. Instead, masks are a visual motif for the fear of sharing one’s true self with another, and the pandemic at large is just another reason why Sara (Juliette Binoche) and Jean (Vincent Lindon) can never feel comfortable together. Something is always in the way of feeling entirely content.

Both Sides of the Blade opens with the two swimming in the sea on an idyllic holiday. You’d think it was paradise if it wasn’t for Tindersticks’ ominous score, a sign of the emotional fireworks to come. Binoche’s Sara works as a radio personality in chilly Paris while Lindon’s Jean is looking to get his life back on track. He was a former professional rugby player who did time in prison, and is now looking to finally land a good job. Jean is also an absentee father to his son Marcus (Issa Perica) who lives with Jean’s mother Nelly (Bulle Ogier) in a nearby town. It’s clear that Jean feels fairly emasculated as he struggles to rid himself of his ex-con label. That general uneasiness is turned way up once Sara sees her ex-lover François (Grégoire Colin) and a swell of emotions rushes through her.

François was a friend of Jean’s before going behind bars, and as it turns out, François offers Jean a position at his new sports agency, which creates quite the fiery love triangle. Quickly, Sara begins to question what she truly wants. Does she want to stay with her husband, or return to the very passionate romance with her ex-lover?

Denis has always been a master of obfuscation. Both Sides of the Blade transcends typical melodrama tropes by refusing to entirely explain these characters’ interactions or intentions while also filming their actions with a strong sense of fatalism. Lindon masterfully toes the line between a hangdog, down-on-his-luck layabout and a mysterious, almost sinister force. Both Sides of the Blade often returns to a shot that shows Jean talking on the phone outside on the balcony while Sara looks on from the inside. It’s a great illustration of the constant communication barrier in their relationship. The way Lindon appears to be actively withholding information from Sara looks like he’s plotting something against her. His late-night phone calls and meetings with François are equally suspicious.

Binoche (as always) is astounding, adding layers to an already jagged, complex character. How she immediately fawns over François appears incredibly cruel to Jean, but Denis slowly reveals just enough to have you wonder if she’s in the right. Or, that her actions are at least very understandable. Her relationship with François is often defined as passionate but destructive — one key scene between the two of them suggests François was highly manipulative during their time together. Her actions are very much in line with someone who dealt with an abusive relationship.

The result is a fiery, and highly depressing view of two people destroying their presents because they are unable to reconcile their pasts. Even though Both Sides of the Blade has a few underdeveloped details around the edges, watching Binoche and Lindon act this out is truly a spectacle, the likes of which we haven’t seen since Marriage Story.

Thank you for reading! What are your thoughts on Both Sides of the Blade? Comment down below!

‘Hellboy’ Fails to Bring the Heat (The MovieBabble...