‘The Truth’ Pits Binoche vs. Deneuve 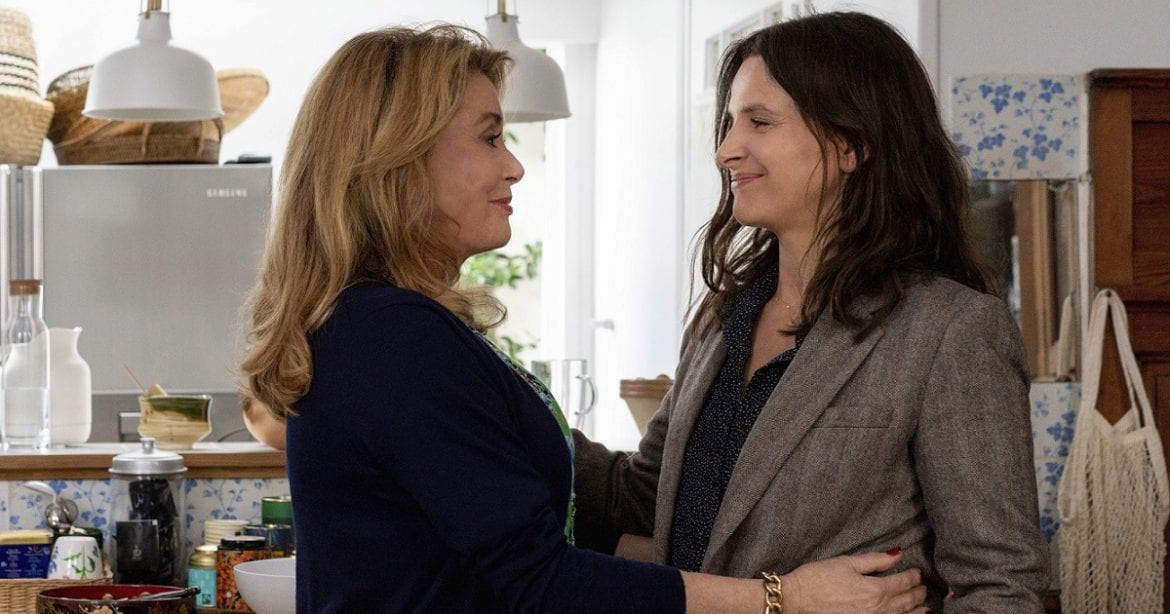 Editor’s Note: The following review of The Truth initially ran during MovieBabble’s coverage of the 2019 Denver Film Festival.

The Truth (La vérité) seems a particularly tricky film to handle. It covers the stormy reunion between a renowned French actress, Fabienne (Catherine Deneuve) and her daughter, Lumir (Juliette Binoche), as Lumir; her American husband, Hank (Ethan Hawke); and their daughter Charlotte (Clémentine Grenier) visit Fabienne in Lumir’s hometown, Paris, after she publishes memoirs about her life, that also concerns Lumir’s childhood.

In a way, it is a film of many firsts for its Japanese director, Hirokazu Kore-eda. It represents the filmmaker’s first film since he directed 2018’s sensational drama, Shoplifters — the film that would go on to win the coveted Palme d’Or at the 2018 Cannes Film Festival, in France. It also marks a challenge to Kore-eda, being his first venture into an international market; it’s his first attempt at making a film outside of Japan, as well as in a foreign language, as the film’s dialogue is a mix of French and English.

Despite a director of Kore-eda’s talent, it may be hard adapting to a film of such a different and foreign stature. Precisely describing it, placing Kore-eda in the director’s seat of The Truth would be like transplanting a foreign organ into an organism. There’s a chance the film may not be the best fit for the director, and due to this misfit, it will descend into several issues. But there’s also a chance that the film may be the right fit for the director, and as such, will work and function cohesively. The Truth lies somewhere in between these two instances.

When the film works, it acts as a sweet and charming study of family dynamics. At the center of this particular drama is the regard of parent-child relationships, in particular, the uneasy mother-child relationship between Deneuve and Binoche that antagonistically mirrors the darling mother-child relationship between Binoche and her daughter. Essentially, parts of the film could be characterized as a familial battle of Deneuve vs. Binoche. The relationship between the mother and daughter feel so strained due to unforgiven past conflict, disagreement and blame lingering in the background of their connection, feeling as though the two are enabling each other into trying to receive the upper hand over each other, as they bring out the issues over which they remain to be divided on.

Their troubled relationship is astutely brought to life by the talents of Deneuve and Binoche who bring a sense of tangibility to the conflict between the two characters, with performances that feel vivid with regret and disgust, yet are grounded in the associated love they have for each other as mother and child. Binoche feels a sense of lament over her mother, due to her disassociated act, and lack of presence and care when she was young. This feeling of sorrow over her mother’s lack of care for those around her is carried over into a question posed by Binoche to her mom on a film set, regarding her self-absorption and the vanity of her actions: “Do you love yourself or do you love film?” — as such putting into question Deneuve’s self-admiration that often overtook her role as a parent to Binoche.

Linked to Binoche’s parental conflict with her Deneuve is her mother’s reliance on memory in trying to mend her relationship with her daughter in the present. Aside from family dynamics being the main theme, the film also touches on memory, or rather the unreliability of memory — especially when it involves the uncovering of the truth. “You can’t trust memory,” the film states, and that is completely true — some experiences can be easily forgotten, and others can be fabricated entirely. Contextualized within the film as Deneuve concocting false parental situations that never happened to Binoche as a kid, the film critiques the unreliability of memory by showing how this mention of a past action that never occurred (by Deneuve) provokes Binoche’s lament for their strained relationship.

The lingering hostility of the past between Deneuve and Binoche never truly feel resolved, as most Hollywood movies would attempt to go on and do, but Kore-eda never attempts to ice the film with a perfect ending; instead, it presents us with a more grounded reality: that resolve can exist alongside discord — it isn’t binary as per sugar-coated ideal endings. The autumn the family spends in Paris refracts their relationship from one of constant disputation and opposition into one of mutuality and understanding, in a very mature and subtle way.

At times, this examination of the family dynamic feels like a passionate nod to Richard Linklater’s beloved Before Trilogy — and not primarily because Ethan Hawke is in the film. Binoche and Hawke’s relationship in the film feels oddly similar (almost like a throwback) to Delpy and Hawke’s dreamy yet conflicted relationship in the Before Trilogy — they’re both lovely yet muddled relationships that tend to feel real enough to happen. Added on to Binoche and Hawke’s roles as parents, which as well feels similar to Delpy and Hawke’s roles as parents in Before Midnight, the film may as well be Kore-eda’s homage to the realism of Linklater’s Before films.

Hawke in every essence feels like Jesse in Before Midnight — he’s lovable, like most of Hawke’s characters; a hilarious husband, who’s loaded with dad-qualities (and puns); and an adorable character, who feels so humanly relatable despite being a celebrity. Hawke’s bubbly and vivid presence in the film may not be necessary for terms of exploring the family dynamics of a parent-child relationship but his presence in the film is certainly a welcome one.

Where the film loses its touch is with its choppy editing; this is where the film loses a lot its impact too, despite a strong premise. The messy editing makes scenes feel short-lived as they feel as though they are prematurely cut — before they can even fully expand and grow on the ideas they develop throughout the scenes — leading to a loss of impact which softens the film’s message of familial acceptance and forgiveness.

Along with its uneven editing, the film’s short runtime also serves as an indication of how the film, that way too often, feels too short-lived with its strong exploration of familial relationships. What could’ve been a longer and deeper attempt to look at the deterrents of strained relationships turns out to only be a brief look at how these familial strains seem to arise conflict from the past.

Though interestingly exploring a wholly understandable and personal topic, The Truth is dauntingly paced. Although the slow pace helps the film in feeling warm, it may be too quiet for some audiences. In all its quiet observation, many would find it far from entertaining, and especially so, as though it’s missing its mark due to the reduced impact of short-lived scenes.

Kore-eda tries his best with The Truth — it often feels misguided amid its percipient premise, but in some of its exploration, it feels incredibly insightful and wise. His passion is prominent, with certain nuances in the film, such as some of the ashen lighting and the subdued dialogue, helping the family drama feel like the perceptive French film Kore-eda was aiming to make, but his efforts fall short. Disappointingly, The Truth is a forgettable feature that marks a rocky transition to an international market for director Hirokazu Kore-eda.

Thank you for reading! What are your thoughts on The Truth? Comment down below!

[…] is some of the most intense and subtle acting I’ve ever seen in my life, from two newcomers to the scene. Viktoria Miroshnichenko as Iya, or […]

At first, I thought I might pass on this, but then I saw the trailer. How can one not, with Deneuve and “La Binoche”?