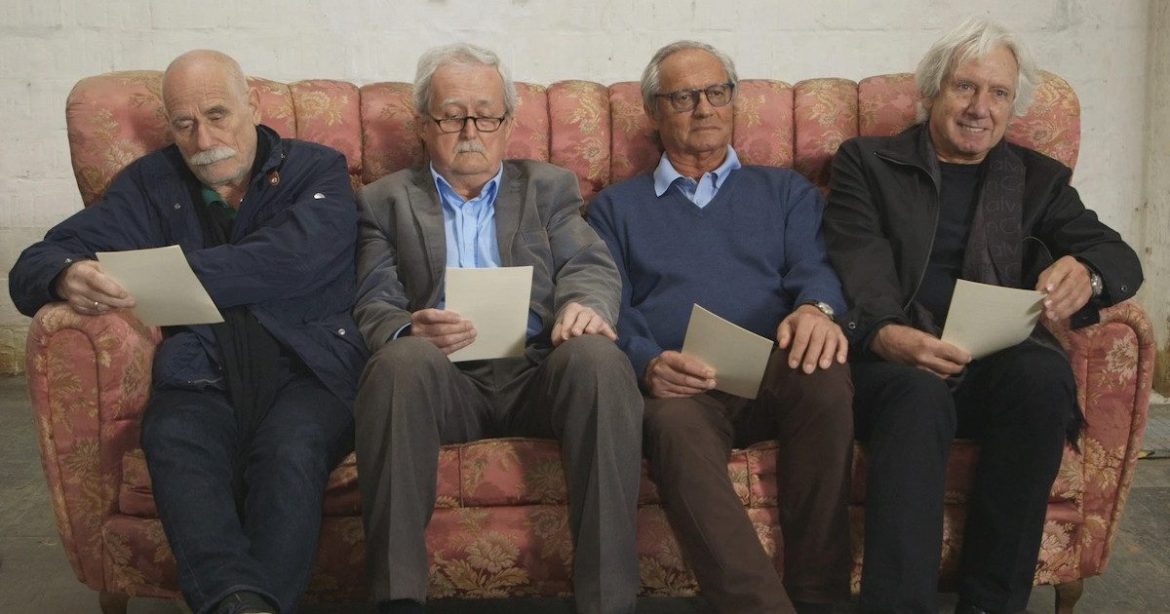 One of the most intriguing and inquisitive premises for a documentary in recent memory, Mutzenbacher‘s usage of a classical erotic text for interpretation through a nigh-absolute, all-encompassing masculine lens makes it a thorough litmus test for the mindset of masculinity by merit of its construction alone. It’s worth discussing just how genuinely taboo-pushing the novel the men are reading for this film actually is — “Josefine Mutzenbacher” is a faux-memoir often attributed to “Bambi” author Felix Salten (yes, you read that right) that lecherously details, in first person, an aging courtesan’s gleeful recollections of her various sexual exploits, specifically starting at the age of five and ending at the age of 13. The excerpts all of these men are reading from are key scenes from the novel in which Mutzenbacher is having graphic sex with various men, and the initial layer of intrigue of this film comes in how casually immersed the men seem in their dramatic readings — which, for particular viewers, probably makes it less surprising when a few of them answer Beckermann’s questions with answers about how sexually repressed the modern day is in comparison, or how some concept of “toxic femininity” never seems to be properly discussed in contrast to toxic masculinity.

There’s no moral judgment that Beckermann assigns to these men, though, or otherwise this would have been a far less interesting product — she doesn’t inject any commentary about the men’s responses and surprisingly detailed gazes into their sexual experiences, but having so many men explain so many different perspectives on the readings and their own sexual lives offers Mutzenbacher an expansive reach in its commentary about the self-contradictory, maelstrom-like mass of emotions from masculinity that no other talking-head documentary has feasibly been able to cover. “Josefine Mutzenbacher,” it turns out, is a great way to reduce these men’s inhibitions about their thoughts on sexuality in a way that makes their responses even more unfiltered and honest to themselves than they would be in any other context, and it makes for some surprisingly piercing insights into these men’s feelings and immediate reactions to the text once they’re done reading their respectively salacious excerpts. These responses most certainly wouldn’t have been coaxed out of them through a typical interview format — it genuinely takes a reading that jarringly discards and spits in the face of social norms that it inadvertently pushes out emotions in these men that some of them haven’t honestly confronted for what’s implied to be many, many years.

These emotions, both about the text and the men’s experiences with sex, aren’t just restricted to something along the lines of this universal undercurrent of thinly veiled misogyny or caustically monstrous repression like more reductively-minded viewers might anticipate. There’s a full gamut of feeling here that runs from, for instance, shame at having discovered such impulses at a younger (or comparatively older) age, the confusion that came with said feelings and fantasies, various reactions to the events that perhaps sparked them, and even the genuine humor that comes with the eventual absurdity of it all. In certain moments of the film where all the men are gathered in a wider room in the studio, reciting lines from the novel as a group, there’s also a deeply strange, off-kilter feeling that Beckermann leaves us with, one that derives from the mildly shocking hilarity of seeing so many men chant explicit, shameless vulgarities in perfect unison, but also some unsettlement in knowing the male-gaze-centric context of the novel from which they’re reciting. The disparity that shows in how men talk about sex between generations is also visible all throughout the film — two younger men in the film, seemingly in their early twenties, don’t have much of a hard time recalling and describing their own sexual exploits (one of them literally refers to masturbation as “[massaging] yourself into an ecstasy of happiness”), while the middle-and-older-aged men in these auditions are talking about these topics with a visibly palpable sense of awkward, paranoiacally self-conscious anxiety.

Perhaps there’s a Freudian argument to make about the childhood-rooted process of discovering and navigating sexuality that this film is nodding to here and there, but Beckermann is evidently no psychoanalyst, nor does she appear interested in catching these men mid-speech for their more eyebrow-raising words in a punitive or blatantly analytical way. In a sense, it feels like she’s trying to depict men from all walks of life — men of all races, sexualities, ages (as mentioned), and so on are brought in for this project — in order to peer into all-encompassing insights into masculinity’s relationship with sexuality that can’t merely be simplified into broad moral terms. Mutzenbacher is, without a doubt, a genuinely bizarre example of humanization in documentary film, one whose foundation is, again, based on one of the most controversially lurid novels in literary history, but the things it has to say about the social, political, and internal constructs that define the minds of men transcends generalization entirely for something even more confusing, overwhelming, and difficult to parse through — especially more so than the binary terms through which we perceive masculinity and all it entails.

For more information on Mutzenbacher and other films playing at the New York Film Festival, check out their website.

Thank you for reading! What are your thoughts on Mutzenbacher? Comment down below!

‘Cry Macho’: Age Is Not a Deterrent