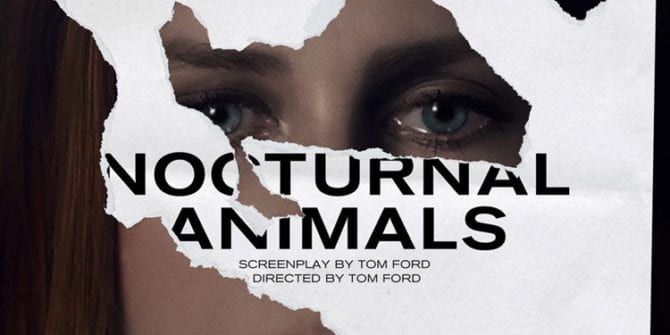 Nocturnal Animals has finally been released wide in theaters, which had me running out to the theater to see it.  The movie has gotten some serious buzz at film festivals and early screenings, so obviously I had to go watch it and see for myself!  As always, the following review will be spoiler free.  Be sure to comment at the bottom of the page with your own thoughts after reading.

The film follows Susan Morrow (Amy Adams) as she struggles in her current lifestyle.  She has trouble sleeping, struggles with confidence in her art work, and deals with a very troubled marriage.  One day, she receives a package from her ex-husband Edward Sheffield (Gyllenhaal) which contains a manuscript of his new novel, which Susan had inspired him to write.  As she reads his novel, which contains a very grim story of sheriff Bobby Andes (Shannon) helping Tony Hastings (also Gyllenhaal) to take revenge on Ray Marcus (Taylor-Johnson) for an egregious action, we learn about Morrow and how she got to where she is in life.

Since I heard about Nocturnal Animals, I was very intrigued by everything about it.  I was very surprised to hear that Tom Ford, the fashion designer, had written and directed the movie.  This is his second directorial work, with A Single Man being his directorial debut.  I was very interested to see how his artistic vision and sensibilities would translate to the big screen since I have yet to see A Single Man (which has an impressive Rotten Tomatoes score of 85%).

The cast of this movie is also absolutely impeccable.  I’m a huge fan of Amy Adams and I loved her last movie Arrival (you can read my review of Arrival here).  Jake Gyllenhaal and Michael Shannon always lose themselves within their roles, becoming the character necessary for each film they are in.  Both of them are super underrated in my mind and should be put in the same conversation as Leonardo DiCaprio when it comes to acting chops.

However, I was curious to see how Aaron Taylor-Johnson would fair in this movie.  He was much maligned for his wooden performance in 2014’s Godzilla and was somewhat underwhelming as Quicksilver in Avengers: Age of Ultron.  Not that I was concerned about him in this movie, but I wash definitely eager to see how he would perform up against the other great actors on screen.

After approximately two hours, I left the theater loving Nocturnal Animals.  Tom Ford should be considered for a best director nomination.  Not only does the film look absolutely gorgeous from start to finish , it tackles a very sprawling plot and tackles it with ease.  I found it so impressive how Ford managed to flesh out characters both in Edward’s novel as well as outside of the story with ease.

This movie, if put into the wrong hands could have been very cheesy, unfocused, and very convoluted.  Ford plays the duality between each character so well while perfectly showing the parallels between the book and real life character arcs without hitting you over the head with its themes.  This film does not work without a steady presence behind the camera.  Nocturnal Animals certainly has me interested to see what Tom Ford tackles next.

image via The Zoe Report

Not only does Tom Ford deserve a best director nomination, but Michael Shannon most definitely deserves a best supporting actor nomination as well.  Shannon as Bobby Andes has such an unbelievable presence surrounding him on screen.  His performance is very understated, but very strong and powerful.  There’s a couple times when he’s starring at another character, and you can just feel the intensity radiating off of him.  He’s quite possibly one of my favorite sheriffs in movies.

I was also pleasantly surprised by Aaron Taylor-Johnson.  You absolutely hate his character, which is the best possible way you could complement Taylor-Johnson for his performance.  He’s insane, unpredictable, and completely despicable.  He, like everyone else in this film, lost himself in this character.  He really showed me a side of him that I didn’t know he had.

I really appreciate how this is a mainstream movie that is not afraid to be weird and different.  Nocturnal Animals has a very different way to tell a story and really sticks with you after you leave the theater.  As you think more about this movie, you start to see how all these different stories come together for a really worthwhile movie experience.  I will note, however, that the open credits are the most jarring and uncomfortable few minutes I have experienced in a very long time at the theaters.  I’d advise you to prepare yourself thoroughly!

Nocturnal Animals is a different, thought-provoking movie that is well acted all across the board.  I’ll give it an A.

Thanks for reading!  What should I review next?  Whether it’s old or new, the choice is up to you!

[…] Kush: I’m still waiting for everyone else to rediscover Nocturnal Animals and give it the acclaim it deserves, as it has largely disappeared from general film discourse […]

I absolutely loved this film, it felt like watching a beautiful nightmare. A brilliant review, as always.

It’s incredibly ambitious which I always appreciate. I often find myself still thinking about it on occasion!

This movie completely had me spellbound. I loved the weaving in and out of the narratives and the subtle hints in each that echoed in the next. The cast was very strong, and I too love Amy Adams a lot. She can say so much with her eyes without actually speaking, so subtle and talented.

Out of all the movies I’ve seen this year, Nocturnal Animals was easily the most unique. It’s nice to see strange and different stories told!

Yes, it was an unusual movie but that’s why I loved it. Here’s my review if you’re interested. https://vinnieh.wordpress.com/2016/11/04/nocturnal-animals/

I’m going to see this today!

Tomorrow I had to make a choice between going to this movie or Hacksaw Ridge. I choose the latter. Still reading this, it sounds like a very interesting movie. I was looking forward to Hacksaw Ridge more, so that’s up first. Will keep this one on my radar though. Great review by the way ?

Hacksaw Ridge is my favorite movie of the year so far so made a solid choice!