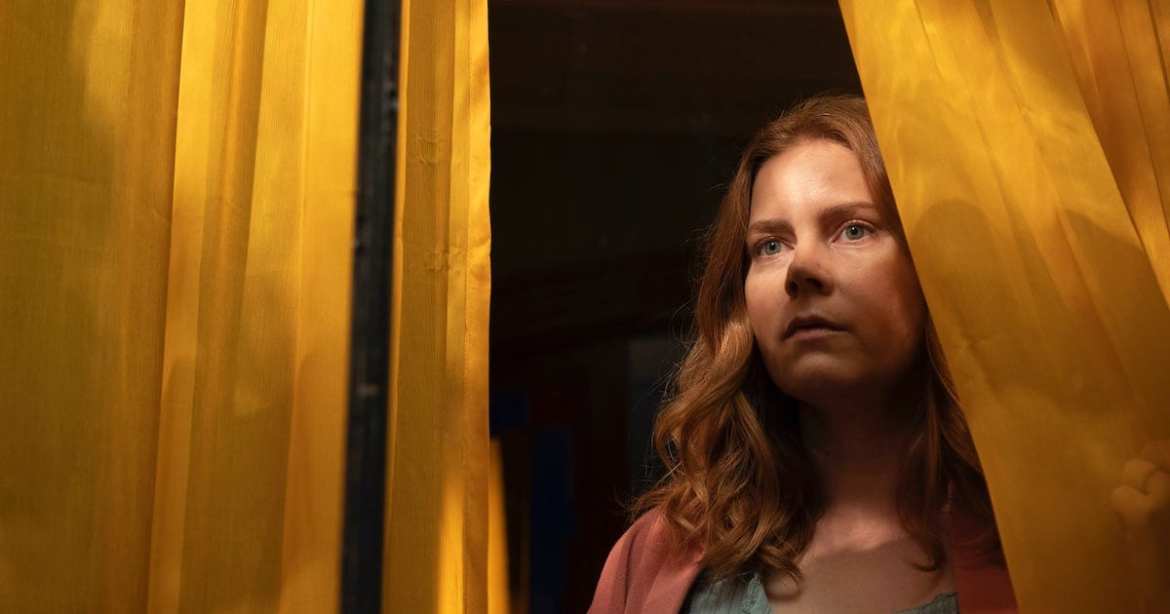 As I’m sitting at my laptop writing this review, I’m drinking a glass of red wine — partly inspired by The Woman in the Window’s central protagonist Anna Fox, and partly driven to drink by the film itself. A psychological thriller based on a 2018 novel by the same name, this insipid, hackish adaptation gets it all wrong.

As is usually viewed to be the case — the book is better than the film. Here though, lazy direction, wildly off performances, and a screenplay that goes off-book does more than just tank the movie adaptation: they have made me go back and examine how threadbare the novel itself was — how its success relied on withholding visualizations and details that would have created a fully-formed world. Because once the film gave that to us, the entire story fell apart.

But! I’m getting ahead of myself. Take a drink and let’s get into it.

Fox (played by Amy Adams) is an agoraphobic child psychologist who is separated from her husband and daughter and coping via large amounts of medication and larger amounts of wine. With little to do and no one but her psychologist, tenant, and distanced family to speak with, she has long since taken to stalking the comings and goings of her neighbors through the windows of her New York brownstone.

All is well (not really) until Fox accidentally befriends her new neighbors — a woman and her son from across the street. After she witnesses a shocking scene from her window that leaves her convinced a brutal crime has been committed, she takes it upon herself to involve the police and subsequently attempt to solve the murder herself.

The scene is set for a compelling thriller – but it quickly falls apart.

As The Woman in the Window opens, you’re given a slow reveal of the still, haunting home where the entirety of the film’s 100-odd minutes will take place, followed by the film’s big title card. It’s a really effective moment, setting an eerie mood and establishing a style for the film. Unfortunately, it’s a style that is rarely referred to again throughout. And that is one of the core issues with the movie — it never decided what it wanted to be. There are moments that employ genuinely interesting technique, where the camera moves in an interesting fashion or the mind of Fox is explored in the actual physical space of the house. But they’re surrounded by a cheap thriller — which is also a hard genre to get right in the hands of someone that doesn’t understand that pulpy fun has value too.

Director Joe Wright (Pride & Prejudice, Atonement, The Darkest Hour) is clearly the wrong man for the job. Inconsistent style aside, he employed all the wrong artistic flourishes as he attempted to bring this novel to life. Decisions that — without spoiling the film — take what were once interesting twists on paper and immediately reveal them to be transparent and stupid on screen. And with those changes, he removed or sidelined critical themes — her skill as a psychologist and her love for old murder mysteries — that made this story feel like it had a purpose. The novel had been a homage to better stories, but the film rendered itself a pale imitation.

As the film nears its conclusion its action sequences ramp up, and this proves to be a tool nonexistent in Wright’s toolkit. The climax ends in a fight scene with such laughably terrible choreography, it’s impossible to finish the film with even a neutral taste in your mouth. John Wick, this is not.

But – and it is with a heavy heart I say this – Wright is not the film’s only problem.

Surrounded by a cast clearly not doing their best work but all delivering serviceable performances — from Julianne Moore as the new neighbor Jane Russell, to Gary Oldman as Mr. Russell, to Brian Tyree Henry as a doubting cop — it’s Amy Adams who fails at the center of this movie. She frets and flails and reads each line from the script as if it were the climax of the film, and she totally fails as the protagonist — even if she is meant to be an unreliable one. In one scene, she says, “It doesn’t matter what you think of me, or if you think I’m reliable”. And true — the name of the game may be unreliable narration. Except it does matter what we think of her! Even as the only person that this film revolves around, she’s hard to root for in any way, shape, or form — and that makes for a really hard viewing experience. 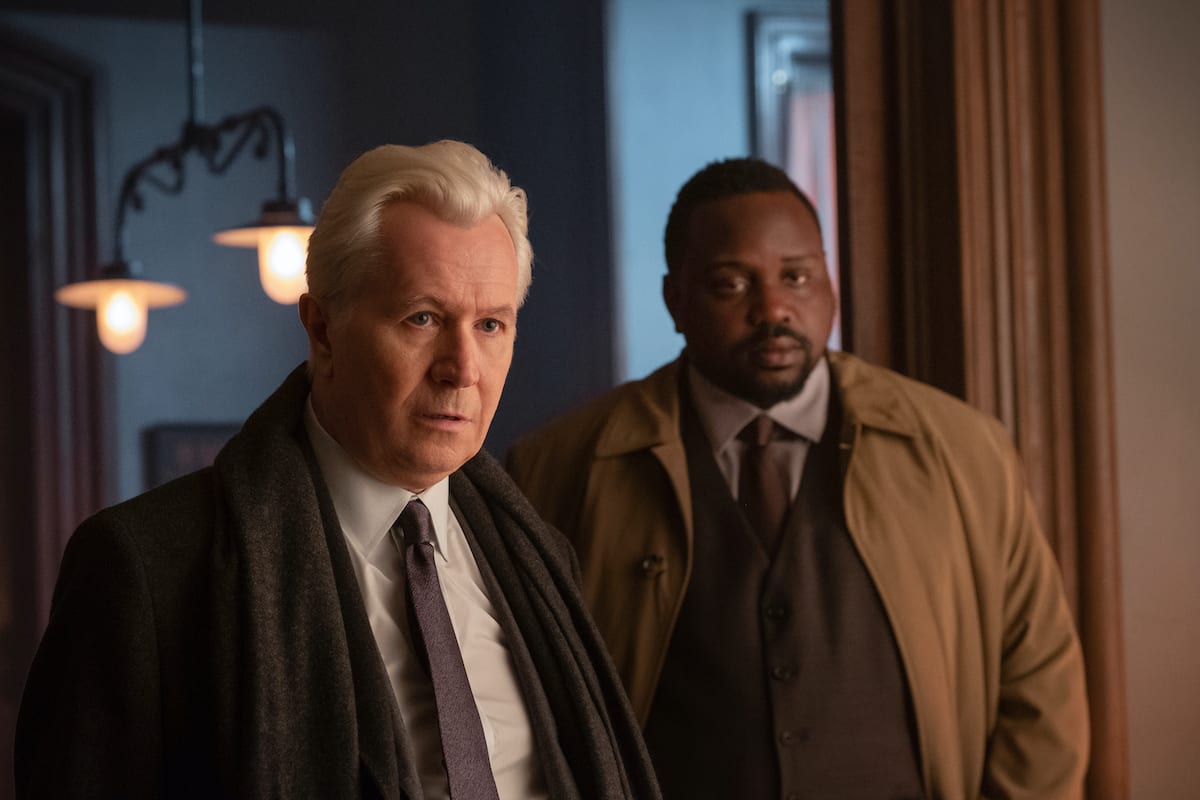 It’s not all Adams’ fault. The screenplay removed critical elements from the book that worked to humanize her, establish her character, and make her more than the crazed drunk we saw on screen. Without those, she lacks any depth and garners no sympathy. But there’s no denying that Amy Adams is in perhaps the worst run of her career. I’m the first person to scream that Adams deserves an Oscar; her roles in Enchanted, The Fighter, and Arrival are among my favorite film performances. And yet here she is — caught between a thankless series of turns as Lois Lane in the SnyderVerse and two horrible performances in Hillbilly Elegy and The Woman in the Window. Next up is Dear Evan Hansen, which could go either way, but certainly is not the role that will return Amy Adams to her place among the best. Villeneuve, PTA, or O’Russell, please — come get your girl.

Once a 2018 bestselling novel, The Woman in the Window was once a highly anticipated film.

Re-edits pushed the film back to 2020, and a global pandemic pushed it back even further to May 2021. This meant that many — like me — had seen the trailer over a year ago, feverishly awaiting Amy Adams in a twisty thriller. It lived up to none of the expectations and will be forgotten far more quickly than it was anticipated.

But it felt like it didn’t have to be this way. Even if the movie was as terrible as we now know it to be, why did Netflix not simply release it mid-pandemic? What’s a more relatable plot than a shut-in watching the life she’s missing out on when we were all quarantining inside missing the entirety of 2020? The delay into the spring of 2021 not only caused it to miss a window of relevancy but created the (mis)perception that this film could have been buzzy or awards-worthy.

It definitely is neither of those things; it’s a terrible disappointment for fans of the novel and of thrillers alike. There’s no saving The Woman in the Window, but could someone please save Amy Adams?

Thank you for reading! What are your thoughts on The Woman in the Window? Comment down below!

Thanks, you just saved me some time :)

‘Pieces of a Woman’, Some Movies We Missed...

‘Crisis’ Fails to Stick the Landing Across Any...