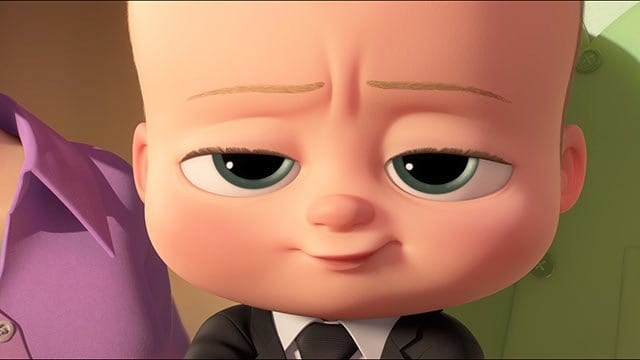 Dreamworks has made a name for themselves by creating out of the box animated films that are just plain wacky.  Keeping with their tradition, they have a new movie entitled The Boss Baby, starring Alec Baldwin as a corporate baby.  But does the film have a deeper meaning or is it just another crazy experience like Bee Movie?

The Boss Baby is directed by Tom McGrath and stars Alec Baldwin alongside Miles Christopher Bakshi and Jimmy Kimmel.  Tim (Bakshi) has it all.  He’s a seven year old with a wild imagination and parents that give him their unwavering love and affection.  However, this all changes when the Boss Baby (Baldwin) comes to town.  Tim and the Boss Baby begins at odds, but then Tim learns of a plot by Puppy Co. to steal all the love in the world away from babies and give it to puppies instead.  Regrettably, Boss Baby and Tim team up to stop this plot and restore balance to their lives.

As mentioned above, Dreamworks continuously pumps out ridiculous animated films that sound nuts from the premise alone.  With memes becoming a major part of the internet, is a movie as crazy as The Boss Baby destined to become a joke like Shrek or Bee Movie (click here to read my full review of Bee Movie)?

This comparison may not be as crazy as it sounds.  The Boss Baby has an absurd premise to go along with a silly lead character voiced by a talented older comedian.  From the trailer alone, you can tell that The Boss Baby will have crazy hi-jinks that seem ludicrous with the characters involved.

Only time will tell on this point.  For now, we can only base the film on its merits.

So what (if anything at all) does The Boss Baby have to offer? For starters, Alec Baldwin steals the show as the title character.  I can’t think of a more perfect actor to take on this role.  The film relies heavily on funny moments in order to keep kids who are watching entertained.  Baldwin is the perfect fast-talking, quippy, older sounding man to take on this silly role as the Boss Baby as the dialogue fits his strengths.

As you might imagined from a film from a major studio, the movie has some very nice animation to its credit.  In order to display Tim’s wild imagination, the film will have a drastically different animation style which appears a little more two-dimensional.  I thought this was a very nice touch to visually show this difference.  It created a nice contrast that helped distinguish each reality, even if there were inherent issues with the layout (which I’ll get to in a moment).

Furthermore, the film has a surprisingly nice theme of family and learning to work together.  As an adult, we’ve seen this idea play out thousands of times in film (Two kids don’t see eye to eye at the beginning of an animated film.  Hmm…I wonder how their relationship will progress!).

However, for kids (which this film is obviously aimed towards), this will be a nice, harmless idea that could certainly be beneficial for you parents out there.

In the end, The Bossy Baby will not offend, so feel free to let your kids see this one. 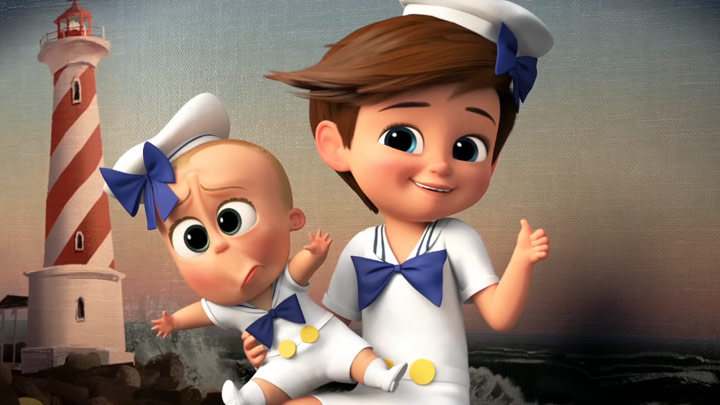 I’m shocked that I’m looking this deep into a kid film with a talking baby at its center, but here goes nothing.

However, The Boss Baby, although full of ambition, is terribly nonsensical at points.

The idea of playing with Tim’s imagination is solidly set in stone from the first frames of the film.  The film even displays a couple scenes depicting a clear difference between reality imagination.  But, as the film progresses, the line between these two extremes blur, making the film incomprehensible from a film standpoint as what actually happened and what was made up is difficult to distinguish.  Kids will most likely dismiss this idea and laugh as Alec Baldwin makes a poop joke.  But, from a film perspective, this concept becomes muddled to say the least.

Moreover, The Boss Baby has a problem similar to that of Bee Movie.  I struggle to know exactly who The Boss Baby’s audience is.

Just from being an animated film, you would think that the film plays primarily to kids.  But there are so many references that a seven year old would never understand from watching this film.  Would a child understand a Long Island Iced Tea reference?  What about a Paul McCartney reference?  I certainly don’t think so.  The best animated films bridge the gap between adults and kids and create dialogue that has can make both demographics chuckle.

This reason is why The Boss Baby is destined to become a meme in the future.  The absurd animated premise with dialogue that only a mid-twenty year old college student could enjoy puts this film right in line with Bee Movie.  Move over Jerry Seinfeld, Alec Baldwin’s baby is the next memesation!

As a whole, The Boss Baby is a little too weird and annoying to recommend to the general moviegoer, but people from the ages of 1-7 could have fun with it.  It gets a C.  If your child desperately wants to go to a movie, this one could do just fine.  Just don’t expect to get too much out of it other than that Alec Baldwin is a national treasure.

The Boss Baby is so insane and nonsensical at times that it is just begging to become a meme once the film hits Netflix in a few months. 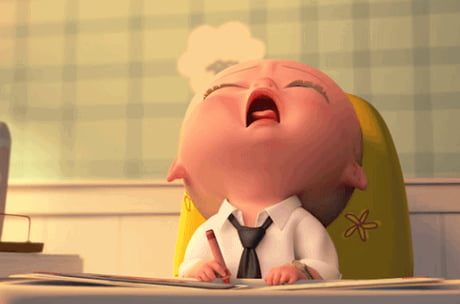 Thanks for reading!  Have you seen The Boss Baby?  Comment down below to make your thoughts heard!