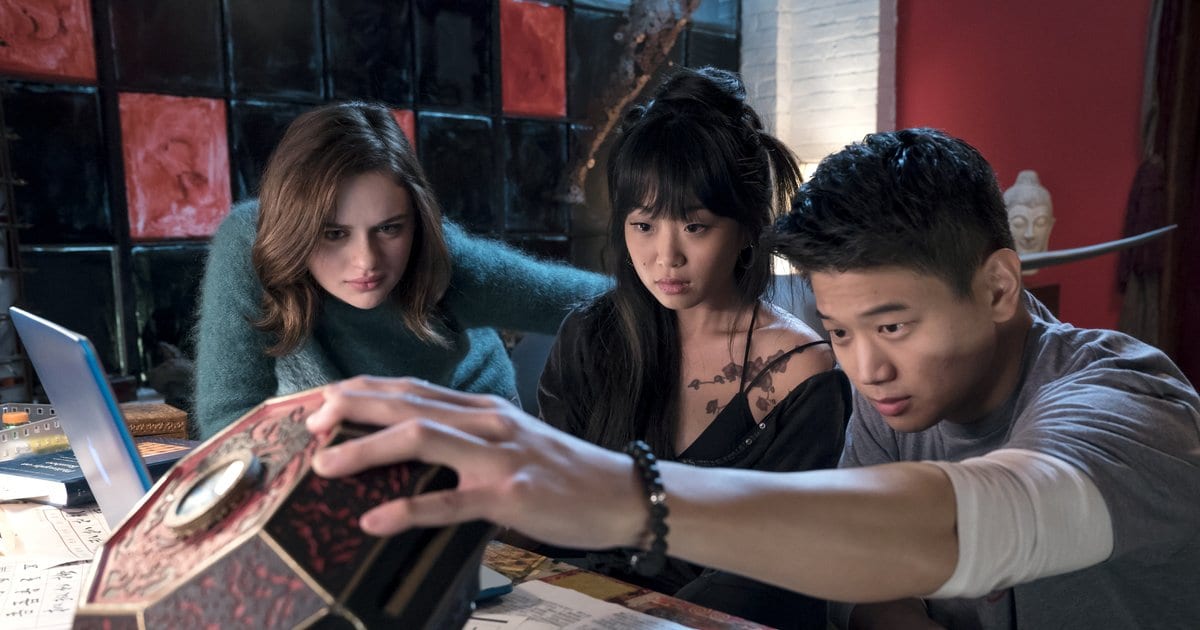 Although War for the Planet of the Apes will most likely win the weekend, there’s another movie that is getting released, Wish Upon!  From the director of Annabelle (oof) comes the story of a demon wishing box that grants you wishes, but with a price.  But is it worth seeing this weekend or should you just scoot to the next theater over and watch apes ride horses?  The following review will be spoiler free.

We follow Clare (King) who isn’t exactly the most popular kid at school.  However, her dad (Phillippe), who is a dumpser diver, finds a mysterious Chinese wishing box, capable of granting seven wishes to its owner.  Clare begins to live it up, getting everything she ever desired.  But, her gifts come with a price.  She quickly discovers that each wish comes with a deadly trade-off, causing those around her to die in Final Destination-like ways.

Weirdly enough, the script for Wish Upon was put on the Black List in 2015.  For those unaware, the Black List signifies the best unproduced scripts circulating Hollywood at the time.  This doesn’t always translate to a good film but it does signify that there’s some quality at the roots of Wish Upon.

In 2016, however, John Leonetti, director of the atrocious Mortal Kombat: Annihilation, was reported to have signed on to direct the film.  I hate to throw people under the bus since making a movie is very, very difficult, but many agreed that he was not a smart choice to helm the movie given his past work.

But hey, at least Broad Green Pictures, the company behind the movie, is granting wishes to fans that make a wish on the movie’s website.  Who knows, maybe you’ll get that new car that you wanted.  Or, you might succumb to a demon wishing box.  Either way, take note of Wish Upon‘s horribly generic tagline: be careful what you wish for.

What I Sarcastically Liked

In a year full of horrible comedies like Baywatch, CHIPS, and Snatched, Wish Upon is the funniest movie of the year thus far.  Those involved in the film struggle to set up even one tense scene, causing all the kills to be absolutely hilarious.  There are moments where the stock horror music comes in and tries to slowly ratchet up the tension.  But, everything about the scenes are just off.  From horrible editing to bad acting, nothing about this film allows you to feel scared.

This is film is also rated PG-13, meaning that none of the kills have any of the visceral punch that would be required to suck in an audience.  The movie has to cut around blood and gore, causing awkward, quick edits that are certain to cause a bunch of laughs. For the five people excited to see this film this weekend, I’ll keep spoilers out of this review.  But what I will say is that there is a moment at the end of this movie so unbelievably funny that I wanted to stand up and cheer.  It’s that bad.

Years later, Wish Upon might find a cult audience due to its unintentional hilarity.  Who doesn’t enjoy a good bad movie from time to time?

With Wish Upon‘s aforementioned PG-13 rating is an obvious ploy to market to middle schoolers and young high schoolers.  Targeting a movie towards a demographic is never a bad thing.  In fact, great movies do it all the time.  The problem in the case of Wish Upon is that the people formulating the characters created caricatures of how teenagers actually act.

It’s as if an older studio executive said, “all I see is these kids taking selfies of themselves so let’s make sure to have characters take pictures at the worst possible times.  People will think that’s hilarious!”

Sorry anonymous studio executive, but I disagree with that sentiment.

We also get to see the stereotypical popular girl spill her drink on the main character only to turn around and exclaim, “woops, my bad!”  What is this, 2002?

To make matters even worse, one of the characters plays a rip-off of Pokemon Go.  Does anyone play that game anymore?  It even factors into an elaborate death in the film.

Who thought that any of these points would make for a good representation of high school?

From the moment that this film starts, we are bombarded with the terror and grief that this wishing box supposedly brings to people.  However, admist cliched Googling of the ancient terrors of the box and unterrifying scares, I wondered, couldn’t you just wish that the box wouldn’t kill anyone anymore?  At the very least, couldn’t you wish for the box to just disappear?

Wish Upon just has too many absurd leaps in logic to be enjoyed in a literal sense of the word.  You can bypass annoying, cliched characters in a film.  But when the film starts falling apart from a logical standpoint, there’s really nothing to sink your teeth into as a viewer.  Rather, you’re more likely to get frustrated and confused. Wish Upon is the best comedy of the year.  Considering that it’s suppose to be a horror film, I’d say that’s less than ideal.  I can’t in good conscience give this film an F, considering I had more fun watching it than any other comedy this year.  But it can settle for a D-.

For those of you that enjoy checking out movies out of shear morbid curiousity, this is the film for you.  It’ll most likely end up on my year-end list of the worst movies of 2017, but that doesn’t change the fact that Wish Upon is wholly entertaining.  Maybe just not in the way the creative team intended…

Thanks for reading!  What are your thoughts on Wish Upon?  Comment down below!

If you enjoyed this article, subscribe to MovieBabble to stay up to date on the latest content.

I had zero interest in this when the plot and trailers released. Will probably give it a miss

It’s certainly not worth you paying to see it. Hopefully I took the bullet so a lot of other people don’t have to lol

Good review Nick. I actually gave it a better score in my review because of the reasons you didn’t like it. In the end I wouldn’t recommend this be seen in theatres at all but given its target audience, I think this movie did try and make it for specific people and not the wide range of horror fans. I turned to my friend I saw this with and said that, “This movie is not going to scare you, it will probably be more fun than anything”. He assumed he was going to be freaked out. That’s what it was. It was just a fun movie. Since this movie did make it to the big screen, did i expect better writing or characters yes but in the end I have definitely seen worse. I thought the ending was good. It ended exactly how it should have ended. The sad attempt to make this movie close to Final Destination was insulting, especially with a pg 13 rating but sometimes the teens need their own version of stuff too. This is definitely a rental but I still had fun watching it.

Like I said in the review, I had more fun with this movie than any of the comedies this year so it definitely deserves some type of praise!

Nice review. For those who really enjoy horror movies, this one will fail to impress but like you said, it’s fun. This is why wish upon received a better score from me. In my review I didn’t really get into the content and more of how it would entertain you in the end. The expectation that the film is going to be a well written scare fest is reaching. To some who are not use to horror movies will be effected by the messed up deaths that occur. I actually loved the ending. I saw it coming and it was exactly what should of happened in the long run. Not sure if you caught it but they actually put a post credit scene in he movie. As if people really wanted to stay behind for potential sequel tease. Check out my review Nick.

As an October Redbox rental for a Friday night film with friends this kind of sounds awesome.

I might have to agree there! Personally, it was so silly that I wasn’t ever bored. It be perfect in a group setting because you could all take terms making fun of all the stupid characters and funny deaths.

Well that is disappointing. I was kind of looking forward to this because I’ve been needing some good horror in my life lately. (I hate waiting until October to get it). Perhaps, I shall wait until this get released on Playstation and save my money.

Yes absolutely do that! A movie this bad doesn’t deserve to make money!

I kind of had an inkling that this would be the case so I was mad when it got pulled from theatrical release here in Canada because I still wanted to see it.

Bummer! Are they sending it straight to video on demand?

I don’t think so. It is getting a DVD/Blu-Ray release.

Ahh I see! I’d definitely wait until it hits Netflix then!

A demon box? Sounds like a really bad Hellraiser rehash!

‘Philadelphia’ and 25 Years of Brotherly Love