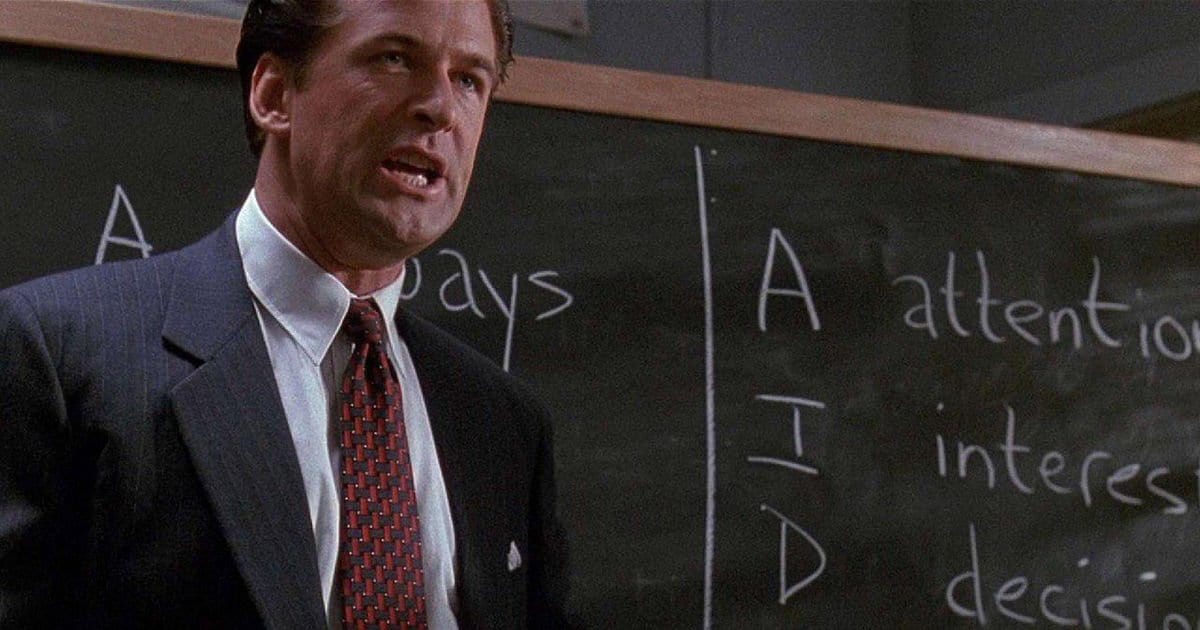 This week’s reader requested review comes from my father (you get preferential treatment when you helped raise a movie critic), Glengarry Glen Ross!  Based off of the play of the same name, Glengarry Glen Ross brought together an A-list cast to showcase the hardships of being a salesman.  But what makes this film memorable?  The following review will be spoiler free.

Employees of a real estate company come to work one day to learn of a new sales contest.  The winner receives a brand new Cadillac.  The losers get fired.  Desperate and tired of the same old leads they’ve been given for months, a plan is hatched to burglarize the office, steal a coveted stack of great leads, and sell them to a competitor. 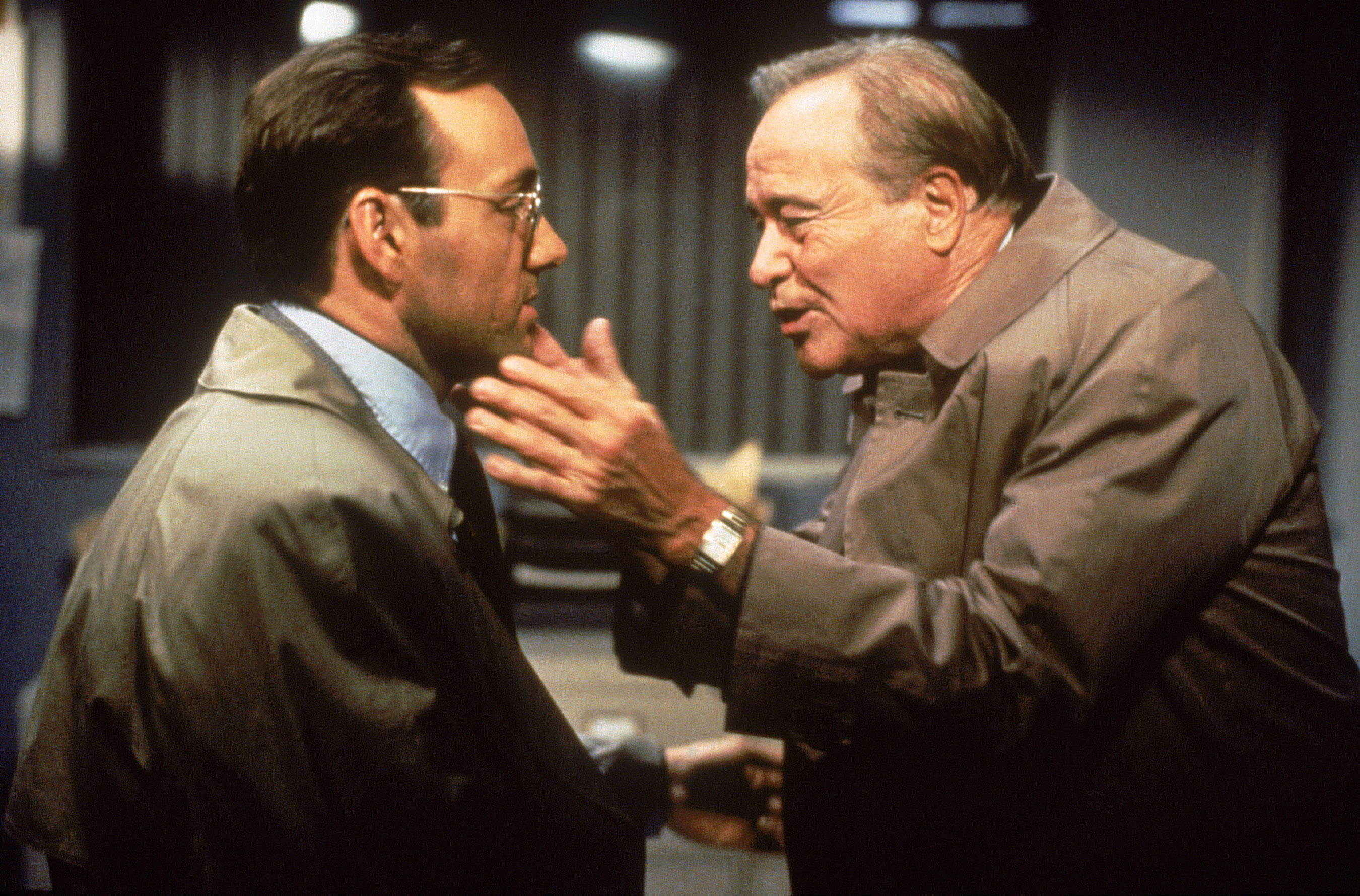 Surprisingly, the film was incredibly difficult to finance, even with the stars mentioned above attached to the film due to its subject matter and rough language.  No major studio wanted to offer any funds to help the property jump to the big screen.  Thankfully, over the course of four years, Glengarry Glen Ross finally received the funds necessary from a wide variety of outlets including a German television station and an Australian movie chain.

These financial issues caused actors to take serious paycuts to be involved.  Al Pacino even slashed his per-film fee from $6 million to $1.5 million.  Big names like Robert De Niro and Bruce Willis even wanted to work on the project.  It seemed as if many actors were huge fans of the play written by David Mamet.

When a film has as many talented actors vying for roles as Glengarry Glen Ross did during its production, the film is bound to have the men who receive parts give it their all.

Each member of the cast, no matter the size of their role, comes to play.  From its adaptation to the big screen, Glengarry Glen Ross kept a lot of its play-like structure intact, giving every actor the opportunity to strut their stuff with some whitty dialogue and a whole lot of charisma.

An obvious standout is Al Pacino in the role of Ricky Roma.  He’s cool, cutthroat, and harsh.  He’s a man out for success that will try just about anything to get a deal done.

While there’s some serious panache and hubris in the film, the heart of Glengarry Glen Ross comes from Jack Lemmon.  Although a lot of the film involves characters doing their best to create new, colorful insults for each other, Lemmon adds some much needed pathos to the film just from his mannerisms.  Sales can be tough, and Lemmon displays that perfectly as a man who’s down on his luck and unable to pull off a deal.  You feel for his character as he does his best to get by but seemingly never does quite enough.

I’d be remiss,however, if I didn’t mention just how good Alec Baldwin is in this film.  Although he’s only onscreen for a tiny fraction of the run time, his presence is undoubtedly felt in one of the best speeches that cinema has to offer.

However, where Glengarry Glen Ross truly shines is in its depiction of the cutthroat world of sales.  You can either strike it big in sales and earn a lot of money really quick, but you can also fail to make ends meet, putting your livelihood (and sanity) at stake.  Within Glengarry Glen Ross, we see both concepts reach an impass, forcing people to make irrational decisions in search of that feeling of accomplishment that comes from the lifestyle.

Just when you think you have it made, all your success comes crashing down.  You’re left to pick up the pieces and pick the phone back up and start dialing more numbers.

There’s a real sense of desperation to this film that mirrors the real pressures of sales positions.  Make enough sales or else.  It’s that simple.

When salesmen get desperate, they’ll do just about anything to feel valued once again.  Luckily, Glengarry Glen Ross has an outstanding cast to allow these ideas to come to fruition.

Glengarry Glen Ross isn’t a perfect movie, however.  Within its play-like structure is the tendency to jump around to different characters to allow them to have their “Oscar” moment, only to then shift to another character with limited bearing on the situation.  This mold is in effect for a large portion of the movie, causing you to delay your affection for each character until the narrative becomes more streamlined and the plot moves forward.  The first half of Glengarry Glen Ross has some great scenes that seem more concerned with showcasing some great acting rather than a great plot.

That being said, there are too many great moments that showcase true power and frustration for them to be written off as mere asides to the plot.  There’s simply too much solid writing and acting to lose interest in this film.

All and all, Glengarry Glen Ross is a very solid movie with outrageously good performances from Al Pacino, Jack Lemmon, and Alec Baldwin.  Although it suffers a tad from an unfocused narrative, there’s a lot of substance to this film.  It exemplifies such how hard a career in sales can be to some people.  Just when you think you’re ahead of the game, reality comes to bite you right in the backside.  Glengarry Glen Ross gets an A-.

As a note, the director of the film, James Foley, went on to direct this year’s Fifty Shades Darker.  All I can say is…what happened?

One last thing: remember your ABC’s.  Always be closing. Thanks for reading!  What are your thoughts on Glengarry Glen Ross?  What films do you want reviewed?  Comment down below!

[…] On the screen, we’ve seen characters rise and fall. Beneath the opulence, such as in Jay Gatsby’s mansion or Tony Montana’s cocaine empire, there was a void that could not be filled through the mere pursuit of wealth. We’ve seen how this powerful delusion could lead to their demise. We’ve seen men on screen destroy themselves for it — such as Willy Loman from Death of a Salesman, or Shelley Levene from David Mamet’s Glengarry Glen Ross. […]

Interesting review. For me, it was just that – dull, though I agree with the things you liked. I must admit I started watching it solely for Baldwin’s *notorious* performance there.

I could definitely see where you’d think it’s dull. The film hits me on a personal level since I’ve had some sales experience in the past lol

Have you done a rating of David Mamet movies? Guess they should be divided between those he wrote, and those he wrote and directed. I’d love your take on them. Cheers

I haven’t done anything of the sorts yet! I’ll have to change that soon!

Glengarry Glen Ross is a movie that has stayed with me more than any other I can think of, to the point that when I’m feeling hopeless, desperate, and misused, my colleagues have known me to cry out in anguish, “I’m Jack Lemmon in Glengarry Glen Ross!” Very powerful movie and probably the most depressing I’ve ever seen. It was painful to watch.

It really is incredibly depressing. When you think about it, there’s literally no light at the end of the tunnel for any of the characters!

Nice review! I remember seeing this while I was in high school; can’t remember it very well, now, though.

I hadn’t thought about it for ages, but just last week Glengarry Glen Ross showed up in an article I read (http://tinyurl.com/yaq9zch3), which mentioned that Alec Baldwin’s character was actually added to the film, and doesn’t exist in the original play! I’ll have to rewatch it, sometime.

That’s a fun little fact I wasn’t aware of. It’s nice when you have a smart creative team that expands upon source material to make it more cinematic in feel!