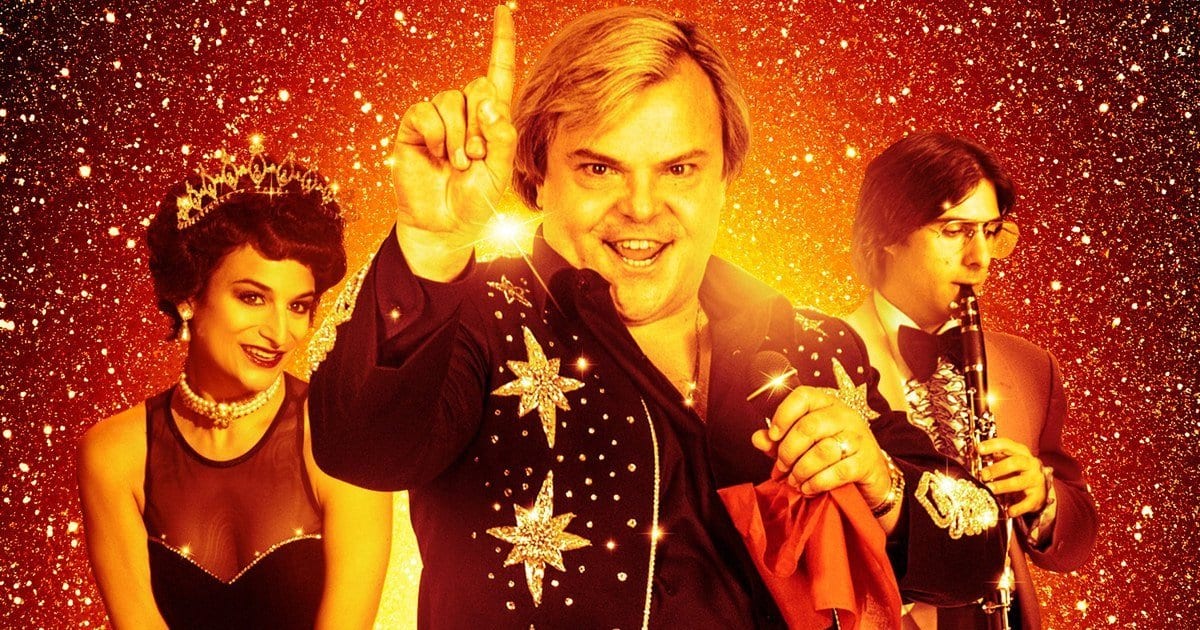 With Netflix’s ability to give creative minds complete control on films comes some truly bizarre works of art — and The Polka King has one of the weirder stories you’ll see all year.  Covering Jan Lewan, the proclaimed “Polka King,” this film is bound to intrigue viewers on its premise alone.  The following review will be spoiler free. 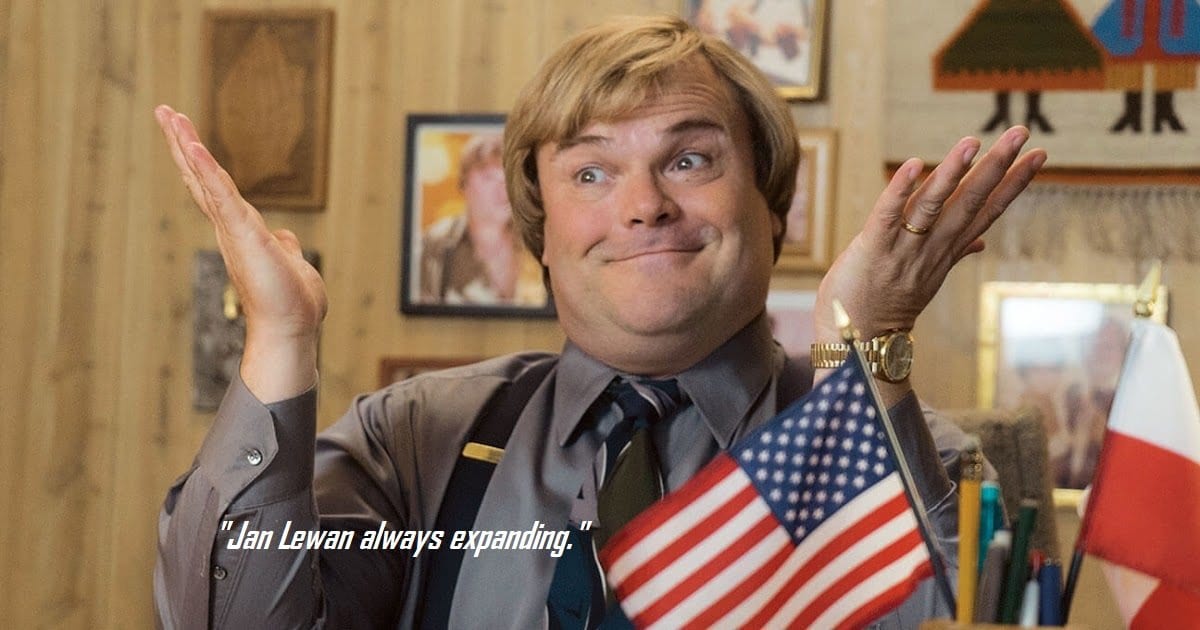 Jan Lewan is a Polish immigrant that fully believes in the American Dream.  He has enormously big ideas, which ultimately leads him to play polka music.  But, he doesn’t stop there.  Jan Lewan is “always expanding,” getting involved in new gimmicks and businesses every single day like gift shops, vodka, and European Tours (just to name a few).  However, he wants to keep expanding, causing him to start taking investments from locals — claiming that he can give them a 12% return.

But, this is only the start of a Ponzi scheme that helps Jan’s stardom rise, but also attracts the local authorities.

The crazy true story of Jan Lewan has been begging to become a feature-length film for quite some time.  The polka artist turned con artist is an unbelievably silly tale.  Who wouldn’t want to watch that movie?

Lewan, now 76, was very involved in the production of The Polka King, Skyping Jack Black constantly about his story.  For an extended time period, the two would call each other at 8 p.m. every night, talking about Lewan’s life for a few hours at a time.  When it came time for Jack Black to record the soundtrack for the movie, Lewan was there in the studio with him, aiding in any way he could.

In total, Lewan took approximately $5 million from people in 22 states as part of his illegal investment ring, sending him to prison for five years.  However, it appears that Lewan is truly sorry for his actions, vowing to pay back all of the people he ripped-off.  These days, he’s back to making polka music, releasing a greatest hits album in January of 2017 in combination with the release of The Polka King at the Sundance Film Festival.

Still, he has a crazy story to tell — one that should work as a feature-length film. Jack Black is Off the Rails as Jan Lewan

In typical fashion, Jack Black is absolutely bonkers in the lead role.  His performance may seem a little too crazy, but he actually pulls off a solid interpretation of the Polka King.  Black is obviously hamming it up — playing to a crowd at all times even though there might not be anyone in front of him.  He uses his comedic singing voice that we’ve come to know over the years with a Polish accent, becoming a larger than life character right before our eyes.

It’s a bizarre tight-rope that Black has to traverse.  Lewan is good-natured at his core, believing in hard work in the American Dream to the fullest extent possible.  In fact, he just wants to provide for his family and show them a better life.  This trait allows the audience to root for him even though he continues to rip people off for their money.  Similar to other films that focus on a “shooting star” individual (one that comes and goes in an instant due to a variety of factors), you like Lewan and are eminently fascinated in his story — yet you still understand that his actions are wrong.

With that feeling in mind, you can enjoy Black antics guilt-free. As I alluded to above, The Polka King has an absolutely nutty story at the center of it all — one that includes Ponzi schemes, the Pope, and attempted murder.  Based purely on the facts alone, you can find fascination in this story.  Lewan goes to great lengths to keep the facade alive that he’s a rising star.  He wastes all of his investments, trying to please an endless amount of elderly people who enjoy his music.

Every decision he makes is in service to his brand, pushing him way past the point of no return.  And, as any flawed character does, Lewan rationalizes his decisions every step of the way, giving him more ammunition to continue to act illegally.

Unfortunately, the events of the film never quite live up their true entertainment value, making The Polka King a bit of dud.

The film suffers from very poor direction — it’s unable to truly pin down its tone.  The Polka King fits squarely in the middle between an all-out spoof and a dramedy with both tugging at each other constantly.  The film goes for silly gags, but they aren’t funny enough to keep viewers entertained.  Then, it’ll go for moments of drama, but the actors continue to perform with a very noticeable bit of exaggeration.  Viewers become caught between laughter and fascination, ultimately feeling flat and uninterested.

Directors Maya Forbes and Wallace Wolodarsky shot the film completely flat — scenes are horrible over-lit, looking like a stage production at times.  Nothing from a visual perspective is ever intriguing, leaving all the entertainment value to the performances — which vary greatly in execution.

You can tell when actors are unsure of exactly how to emote during certain scenes.  Like the movie itself, actors are caught between a spoof and a drama.  When a movie contains a loud, boisterous performance from an actor like Jack Black, everyone else should act as background — becoming the straight man in a comedic sense.  Otherwise, there’s a feeling of every trying to one-up each other, leading to overacting (and annoyance).

Jenny Slate and Jacki Weaver are the main culprits in this regard.  Each woman is an established actress (and have offered solid performances in the past), making it obvious that the directors were unsure how to properly stage a scene.  The two become somewhat unbearable, causing The Polka King to lose most of its momentum.

A crazy story told through the eyes of Jack Black keeps The Polka King sporadically entertaining, but it can’t quite compensate for bland, uninteresting direction that results in some pretty terrible performances.  Jenny Slate and Jacki Weaver seem lost, unable to figure out whether they’re in a spoof movie or a dramedy, combining the required performances of each for a presence that just doesn’t match.

This Netflix original may divert your attention on a lazy day.  However, many will utter the phrase “wasted potential” as they watch The Polka King, wishing that this larger than life story was told in a better fashion. Thanks for reading!  What are your thoughts on The Polka King?  Comment down below!

[…] of the Reagan presidency or anything else of note — is to set the scene, to underscore this immigrant story for each member of the Yi […]

i just watched this movie for the second time last night. I’ts difficult to take the movie seriously, as story lines are not fleshed out properly.( I remember when it all happened, being a polka fan). Unfortunately, the interplay between the family members does not give the viewer enough of a background regarding why things happened the way they did.

It’s too bad, because this story truly could have been made into something eye-catching and memorable.

I think we agree there! There’s so much promise here to make for a wild story, but it’s all just pretty flat

Thanks for reviewing this. I watched this on Netflix last night and it left me utterly cold. I was hoping for another Bernie and it is clear that the potential for another strange offbeat oddball character, using forced charm to mask a sinister underside was there, and is probably what attracted Jack Black to the part. It just didn’t work. Partly because of reasons you hit on like the insipid, un-engaging direction. The script was bland, barely raising a single laugh. This left me confused as to what tone it was going for since it is not funny, that edges it closer to a drama. For a drama, it is too superficial to really probe at the mixture of nefarious intentions and naivety that defined the character. There was a lot of potential for a satire of what happens if you misinterpret the American dream but it came to nothing. It’s not Jack’s fault. He’s big and larger than life, as he needs to be. He nails the accent and whimsy of the man, but he’s just not funny in this, like an embarrassing uncle prancing about at a family gathering. The direction lacked the subversive tone needed to make his antics arch. It all seemed completely fictional, so when it was revealed that he was a real character, I was surprised. It is a cinematic crime when a director takes a real-life story and makes it seem incredulous. I couldn’t quite put my finger on why it felt fake though, until I read a line in your review that said the man himself got involved with the production. That explains everything. It seems like a vanity project directed by the subject. When it should be probing, it is instead trying to make him loveable. It glosses over how devious a character he is in favour of showing off his showmanship. Come the end, the character showed little remorse or consideration of the damaged he caused. He learned nothing and instead the film seemed to want to bask in the glory that prison did not destroy him.

Thanks so much for the great comment! You hit the nail on the head on basically everything, although I would argue that “vanity project” remark in that there’s multiple interviews and articles discussing his full remorse for what he did and even wished to pay everyone back in the future. Naturally, he might have heightened his feelings for the camera, but I think the correct sentiment is there. To me, it comes down the issue that both of us mentioned: boring direction.