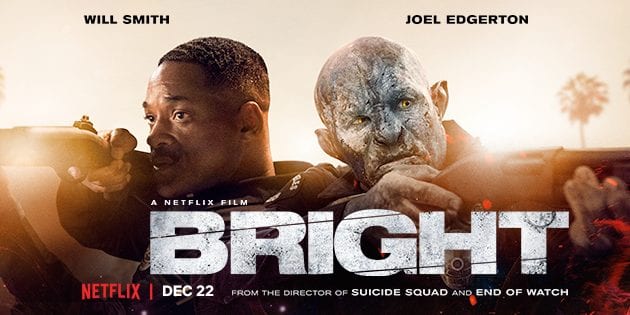 As Netflix continues to crank out original content in order to compete with possible competitors that will pop up in a few years time, they’ve contracted the help of David Ayer, Max Landis, and Will Smith to create world full of franchise opportunities.  $90 million later, the end product is Bright, a fantastical version of present day where humans, elves, and Orcs all live together.  The following review will be spoiler free. 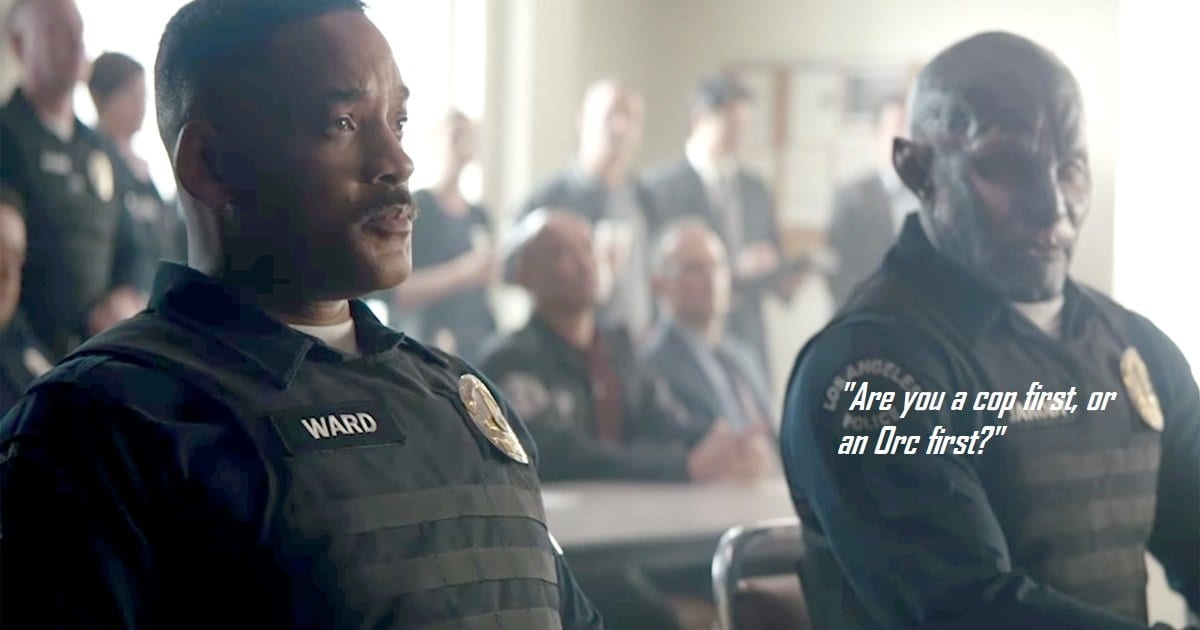 Set in an alternate-present where humans, Orcs, elves, and fairies have lived together since the beginning of time, Bright follows two cops, Ward (Smith) and Jakoby (Edgerton).  Ward is distraught that the department has assigned Jakoby, the first ever Orc cop, to become his partner, causing a riff between the two from the start.

However, when on their nightly patrol, they uncover a wand in the possession of people that aren’t exactly upstanding citizens.  In order to keep darkness from taking over the world, the two must keep the wand out of evil hands.

The Disney-Fox deal leaves Netflix in a bind.  It’s no secret that Disney purchased Fox  to build up its library of films for its streaming app .  Combining the IPs of both Disney and Fox makes for pretty serious competition, leaving Netflix scrambling to produce original content.  In fact, Netflix has already ordered a sequel to Bright as a result.

Many dominant companies such as Disney, Comcast, and Apple have watched Netflix very closely to see what issues arise in running a streaming service.  After much deliberation, it’s clear that it’s incredibly important to own the content that is produced rather than license it.  Netflix has ramped up its own production of original content as a result, setting a goal of 80 original films in 2018.

Currently, Netflix has almost 110 million subscribers.  But, Netflix has been allowed to grow without an incredibly serious competitor thus far, making films like Bright key to the company’s well-being as it works to pull in more subscribers. 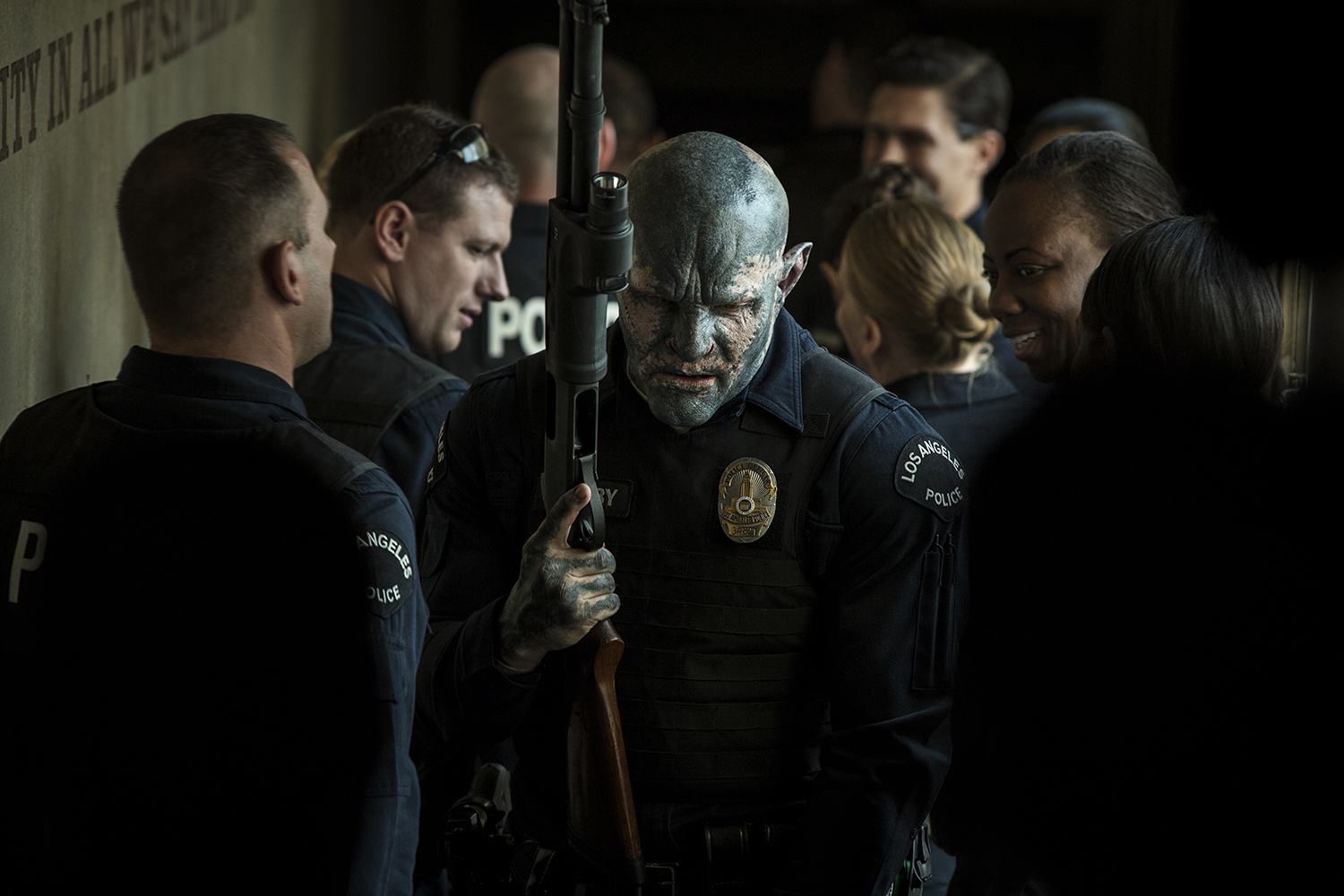 Although he’s become one of the more polarizing creative minds in Hollywood, writer Max Landis sure knows how to create a world full of intrigue.  With Netflix desperate to find a movie franchise to provide growth for the next few years, Bright contains tons of opportunities to do just that.  Fantasy elements aren’t used very often in film (mostly due to the fact that they’re very risky endeavors).  Combining a gritty cop drama with classical fantasy creatures makes a world that is practically unparalleled in the medium.  In a time where mainstream film is becoming more and more generic, true creativity deserves praise.

Bright also creates the opportunity for solid social commentary.  The execution of this idea may not work, but it adds another layer to an already fascinating feature film.

Bright added two prominent actors, Will Smith and Joel Edgerton, in the lead roles, providing two likable leads for the central buddy-cop dynamic in the film.  On paper, this movie should have worked.

Sadly, the execution of Bright‘s ideas are sloppy at best.

Connections to 2016’s Suicide Squad are easy to make in Bright.  After all, David Ayer is the director of each film with Will Smith and Jay Hernandez acting as prominent characters in each story.  Each film even contains a law enforcement plot with an obvious twist on the usual formula.  Unfortunately, the two films share similar problems as well.

Ayer brings a similar aesthetic to Bright, one that is incredibly dingy and dark.  There isn’t necessarily a problem with creating this mood, but Ayer’s style is largely unpleasant, becoming less of a brooding experience and more of a visual depiction of the winter clothing line from Hot Topic.  Movies like Se7en discover ways to stay imaginative even though most of their frames remain in a darker hue.  Bright, on the other hand, is attempting to feel dark and grisly without much stylistic thought, making the entire movie look downright nasty.

However, that overreliance on creating a tough exterior gets the film in trouble, creating Orc characters that the viewer can characterize as stereotypical by their outfits and speech patterns.  Even worse, Bright spends way too much time beating a dead horse with its inherent metaphor on race relations that the world isn’t fully fleshed out.  In fact, the main villain doesn’t speak until late into the third act of the film.

A Great Example of How Tonal Shifts Can Ruin a Movie

Bright‘s biggest flaw, however, is its inability to pin down a consistent tone.  As mentioned above, the cop drama bathes itself in a self-serious, disgusting aura.  But, rather than creating dialogue to accent such a world, Bright adds very misplaced and desperate comedy that shouts, “please like this movie!”  It’s one thing to tell a joke, but it’s another thing to completely ruin an unbelievably serious car chase with an Orc shouting, “butterfingers!”  Not only are these moments not funny, they cause the scene to lose whatever momentum it had.

Similarly, Bright, like Suicide Squad, has a pop soundtrack that is sprinkled throughout the movie.  Sadly, like its use of humor, Bright ruins its gritty exterior by misplacing songs that are better served for a romantic comedy.  Combined with a liberal use of the F-word that becomes tired without use of a stylized emphasis, Bright devolves into a desperate attempt at pleasing more audiences than which it should be concerned.

Bright leaves viewers unsure of how to feel.  Desperate comedy with bloody violence and uninteresting characters leave Bright mostly unappealing to everyone besides hardcore fantasy lovers.

Bright contains an undeniably interesting world that should please fans of fantasy on its premise alone.  But, David Ayer soaks the world in a gross atmosphere, making an interesting world feel dingy, unpleasant, and occasionally racist.  There’s some fascinating mythology in Bright, but it loses out to painful humor.

Yet, a sequel to Bright could work nicely if it takes the mythology in another direction.  With Disney breathing down Netflix’s neck, this proposed idea might become necessary in time. 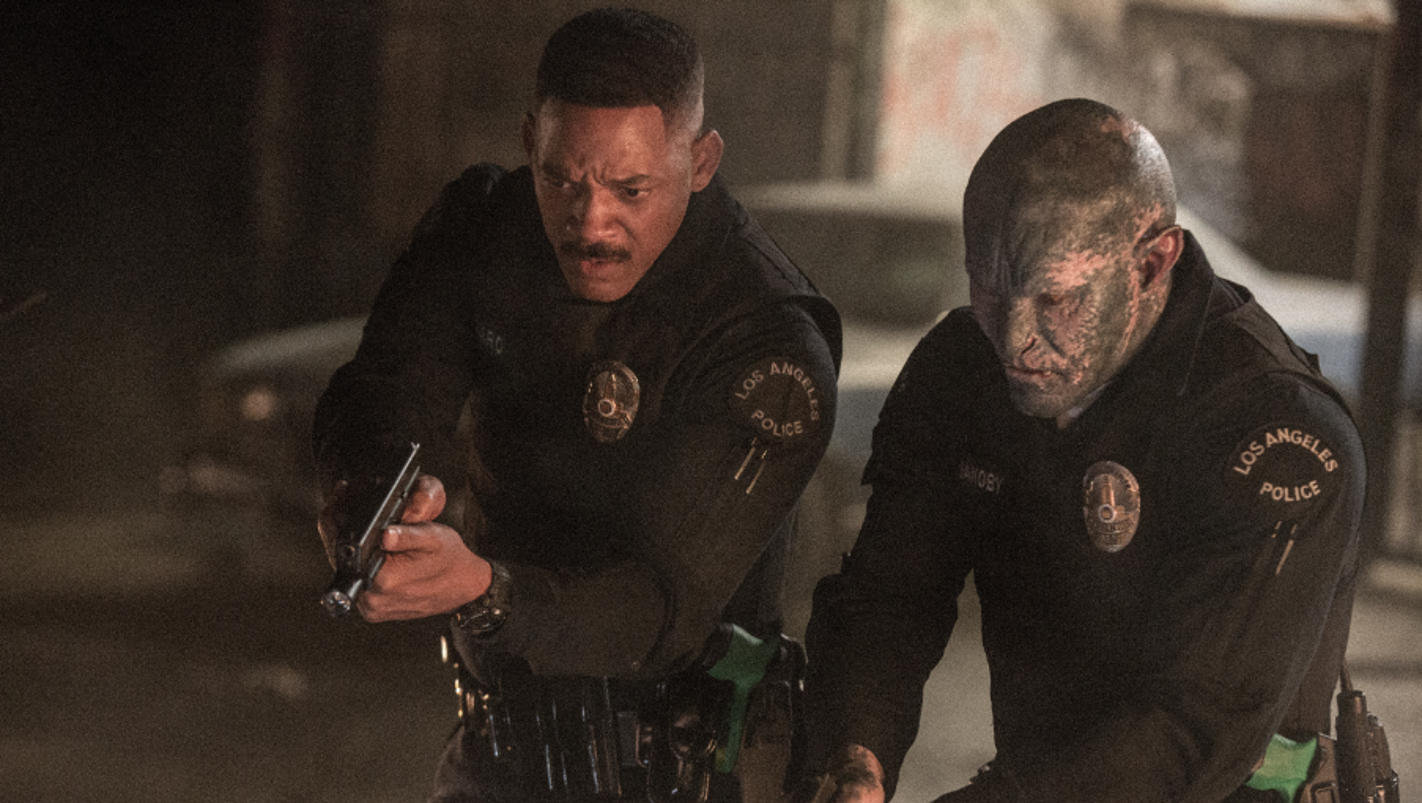 Thanks for reading!  What are your thoughts on Bright?  Comment down below!

If you enjoyed this article, subscribe to MovieBabbl via email to stay up to date on the latest content.

[…] main complaint about Saw V was that it is less a Saw movie and more a cop drama. Agent Strahm is now aware of Hoffman’s loyalty to Kramer and therefore wants him locked up, […]

Well I haven’t been to the theater for a while, so I haven’t seen any of these recently reviewed films yet (Netflix is a no go for me), but if I understand correctly Bright is racist. Downsizing is Racist. Any other films that I need to know are racist?

Not trying to be a troll, but somehow I doubt everything is racist. I think it more likely the college brainwashing is taking its toll… I don’t mean this in a mean way, but I don’t blame you if you don’t care to hear it.

Lol I hear you! I didn’t find Downsizing to be racist. An Asian actress uses a broken English accent that some have found insensitive, but it didn’t strike me as such. I feel Bright was certainly an attempt to discuss social barriers but just came off as insensitive to some as Orcs (which stand for the lower class) are all gangbangers and all wear oversized football uniforms and chains. I could certainly see where this could be viewed poorly.

It’s hard for me to really understand anything that people think being a white male. I don’t know, I just always try to get people to stop overreacting whenever I can but also understand where they are coming from.

I don’t think people are really hard to understand based on race, gender or class. That’s more an illusion created to perpetuate victim status, but I suppose this becomes a conversation for another forum. Everyone wants the same things at the root. Everything else is just details. For instance, we all want to see movies that are good and do not suck ;-)

That’s about as succinct and perfect as you could have put it!

You mention that Bright is set in an interesting world, and I agree, but the world seemed inconsistent within itself. I feel like there were a few inherent contradictions within the lore and mythology that Bright hints at. One example being the Dark One that was hinted at throughout the film: since the orcs capture Ward and Jakoby and take them to a church, we know that Christianity exists in this world, so how does that work with the Dark One? The Alamo is also mentioned briefly, so that leaves me wondering how orcs and elves play in to historical events.
This sort of tangled history isn’t necessarily a flaw in the movie, but because of it I think a good (or even passable) sequel would be monumentally difficult to pull off.
I enjoyed hearing your thoughts! If you’re interested, I did a review on this film as well: https://nathanheardwords.com/2017/12/29/bright/

Maybe the Dark One is a metaphor for radical religious beliefs. After all, the film delves heavily into social commentary. I don’t think making a sequel is incredibly difficult, but it does need a solid director attached since the franchise sorely needs a facelift.

I would give Bright a higher grade than you did.

That’s fair! After all, art is entirely subjective!