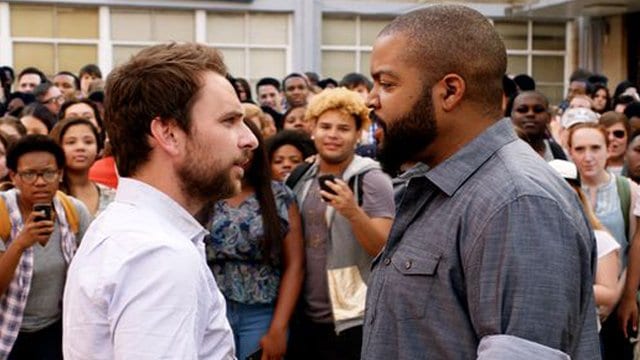 One of the first zany comedies of the year is Fist Fight, a movie where two teachers fight each other at the end of the school day.  With such a premise, you can be sure that the following review will be spoiler free so that you can view all the hi-jinks for yourself.

It’s the last day of school at Roosevelt High School and the students are going absolutely nuts with pranks and vandalism.  Andy Campbell (Day) is doing his best to get through his final day of school (while worrying about whether he’ll be fired or not) when he gets caught up in one of Ron Strickland’s (Ice Cube) over-the-top actions to keep his students in check during class.  When the principal starts asking questions, Campbell snitches, causing Strickland to lose his job.  As a result, Strickland then challenges Campbell to a fist fight at the end of the school day. While they constantly plays the same roles in film, there’s no denying that Charlie Day and Ice Cube have solid comedic timing.  Day has been killing it for years with his hit TV show It’s Always Sunny in Philadelphia and has recently done well in films such as Horrible Bosses and Pacific Rim as he continues to improve his signature riffing style of comedy.  While it sometimes doesn’t work in film if he doesn’t have good chemistry with the rest of his cast, it works really well when properly applied.  Along the same line, Ice Cube always plays the rough, tough guy that doesn’t take crap from anyone and always sports a grimace, but you can’t help but enjoy it every time.

I really liked the idea of this movie taking place all in one day.  It’s always a nice change of pace to have a film take place in a confined area and/or time period rather than the typical movie that spans the globe over uncertain amounts of time and people just happen to show up in the same place at the same time.  Although it might not be on full display in a zany comedy, keeping the story confined to a day allows the storytelling of a movie to shine and lets the circumstances of each scene play out. While the end result of Fist Fight is mixed, there is some fun to be had if you’re willing to sift through jokes that don’t hit too well.

The obvious stand out of the film is Ice Cube.  He continues his movie persona of being angry and intimidating, but it still works really well.  We’ve all had that unnecessarily hard teacher that goes WAY too hard with discipline in the classroom.  Ice Cube is the exaggeration of that teacher.  Having a teacher who has a disciplined class solely out of fear because he might smack some of the students in the face to shut them up or crack their desk in two with an axe allows for some fun gags.  Ice Cube definitely has the most jokes that went over well with the audience in the theater.

However, for all the promise that this movie has, it predominantly falls pretty flat.  The dialogue itself would appear to be funny in a vacuum, but a lot of the line delivery just doesn’t work.  Charlie Day has a few lines at the beginning of the film that are suppose get some laughs but are said in such a monotonous, boring manner that it just comes off as very bland.  Other cast members, such as Jillian Bell and Tracy Morgan, deal with the same issue.  The things they say are completely ridiculous and could get major laughs, but it feels like the actors saying these lines are sleepwalking through the movie.

Fist Fight just doesn’t have the snappy feel you would want out of a movie about two teachers fighting each other after school.  The entire production drags on, often resulting in comedy of the lowest common denominator rather than quick, smart banter that truly great comedies employ.  Nothing about the movie is incredibly memorable and simply comes off as a very generic movie.

Writing a review for a comedy is tough since it’s hard to say over and over again why a movie made you laugh or not.  But in the end, Fist Fight had too many breaks in between big laughs, leading to a disappointing film as whole.  There are definitely fun moments to be had, but they’re unfortunately few and far between.  Fist Fight gets a C-.  Wait until this movie in on HBO or some other channel to watch it. Thanks for reading!  Have you seen Fist Fight?  Comment down below with your thoughts!

If you enjoyed this review, please feel free to subscribe to MovieBabble via email on the side bar to the right to stay up to date on new articles.

I just saw this movie this past Sunday and thought it was hilarious! I also thought it was a nice change to have it placed in one day. I can’t believe I just now started following you, but I can’t wait for more of your reviews to come!

Thanks so much! I’m glad you liked it! While it didn’t hit me the same way it did for you, I can totally see why people would love it.

So i can understand its the type that better seen as home movie to fast forward it, until then I’ll wait for the DVD release

That’s probably a good idea! Save your money for March for when movies like Logan, Kong: Skull Island, Power Rangers, or Beauty and the Beast come out!

All I’ve heard has been great so far so we’ll see!