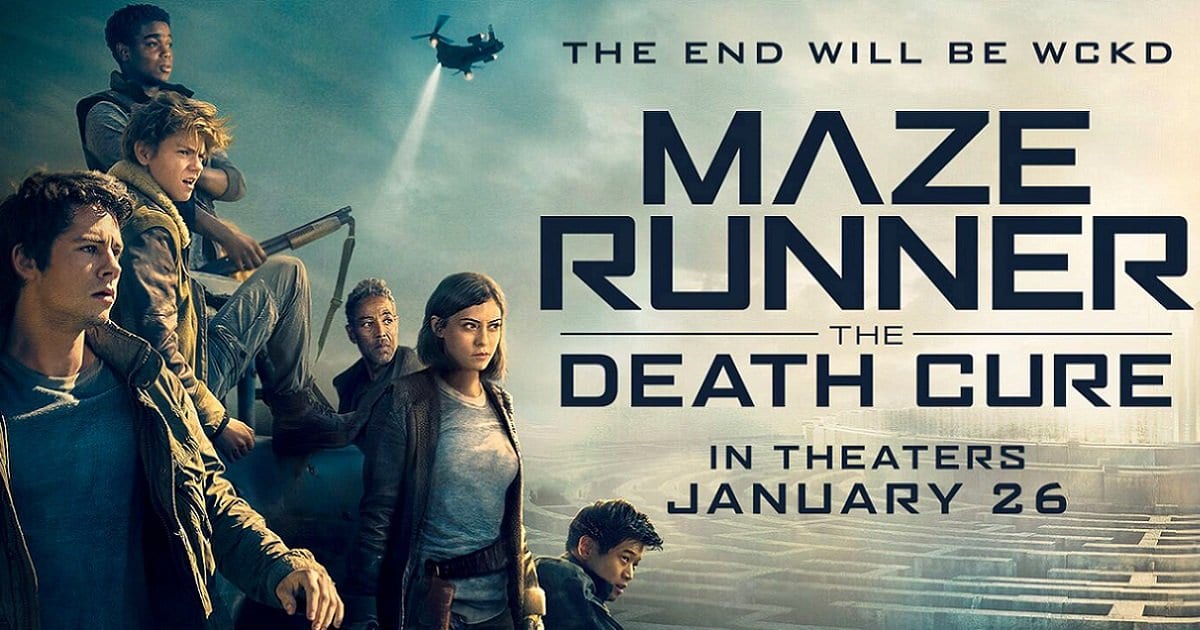 Following two commercially successful Maze Runner films, the third and final installment in the franchise, Maze Runner: The Death Cure, is finally out in theaters.  Starring rising talents in the industry, Fox worked tirelessly to release this long-delayed film before all of the actors aged out of their YA roles.  The following review will be spoiler free. 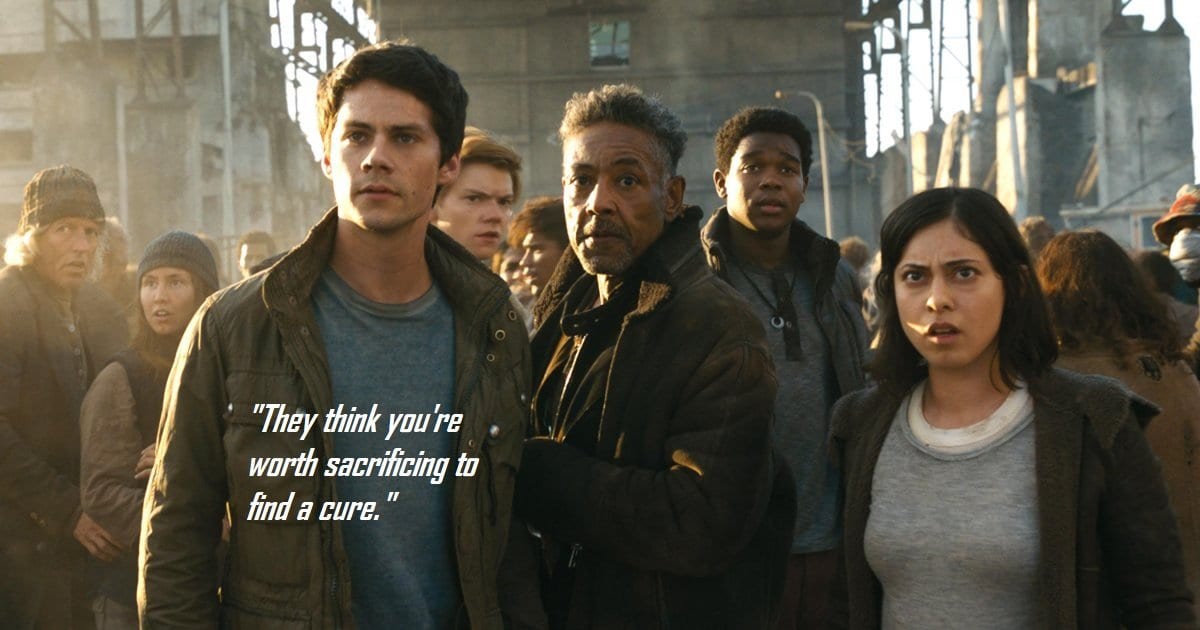 While it’s often not a good sign of the film’s quality to see a finale to a blockbuster franchise open in January, Maze Runner: The Death Cure came to its current release date for an entirely different reason.

At the start of production, Fox slated Maze Runner: The Death Cure to release on February 17th, 2017.  Principal photography began almost an entire year earlier on March 14th, 2016.  Unfortunately, Dylan O’Brien was seriously injured on set four days later, putting him in the hospital.  O’Brien suffered a head injury that was actually life-threatening at one point, causing production to shut down altogether.  O’Brien was in a critical state for quite some time, pushing the restart of filming all the way back to March 6th, 2017.

Thankfully, Dylan O’Brien made a full recovery with the help of Fox’s patience in the entire matter.  Once production started again, it finished without a hitch.  In fact, O’Brien gave his blessing to director Wes Ball to actually use the footage leading up to O’Brien’s accident in the film.  The shot itself was featured prominently in the promotional material for the film (the long, sweeping shot where O’Brien attaches a clasp to a train).  Now, fans of the franchise can finally enjoy The Death Cure and finish off one of the more successful YA adaptations.

Wes Ball Shows that He Has Serious Talent Once Again

In the future, any film fan should be excited for a film that Wes Ball directs.  He takes a middling budget and makes the entire landscape of the film look breathtaking, blending practical and CGI elements with the help of the rest of his crew.  The Death Cure looks like it has a $250 million budget, but it only has a $62 million budget.  The rubble mixed with the heightened technology makes for an aesthetically pleasing film for the entirety of its 142 runtime (more on that later).

Wes Ball also directs the action with a serious amount of flair.  The Death Cure starts out with a bang as an extended train sequence immediately provides a visceral impact that a movie of this magnitude needs.  However, the true brilliance of his skills lie in the smaller details.  There’s little moves in the choreography that make you think, “have I seen this before?”  For a PG-13 film, the action is pretty intense, highlighted by a chokehold created by someone using a person’s shirt collar against him.

Wes Ball has paid his dues with the Maze Runner franchise.  Now, he should get close to carte blanche with his next project that is sure to become another well-produced adventure.

The character of Thomas hasn’t exactly been the most fascinating over the course of this trilogy, but Dylan O’Brien has always added a little glimmer to that character that made him likable.  It’s only a matter of time before he becomes a bona fide star (you heard it here first!).

You can tell why O’Brien hurt himself during the making of this movie.  His performance is very physical as he jumps from platform to platform — forcing his body to move as quickly as possible.

When he acts injured in the film, you definitely feel it as an audience member.  He puts all his effort into appearing broken that you eventually give in and root for him.

Although the plot of Maze Runner: The Death Cure isn’t perfect, there’s a connection to O’Brien that is constantly present.  He’s noble and respected by his peers, creating something out of nothing with his character.  Most actors can’t elevate weak writing for their character into a compelling onscreen presence — but O’Brien is firmly among the group of actors that improves a movie just by being a part of it in some capacity.

The Entire Story Feels Unnecessary (Not to Mention Bloated as Well)

The Death Cure has an interesting idea at its core — who are the right people to save?  There are other nice ideas as well for adults coming into their own that could have resonated nicely.  Sadly, The Death Cure loses its way.

In most cases, it’s not enough to say that a film was just too long.  But, this film was just too long.  It’s a very simple story to tell, but the plot is stretched thin by some odd choices that completely retrace their steps.  Characters have to break into places in order to eventually breakout but then must break back in and start an entirely new rescue and escape process.  These actions take quite awhile to unfold, forcing the movie to screech to a halt.

Maze Runner: The Death Cure repeats itself to a nauseating degree, making the length become a serious issue as the film presses on into its third act.  In this repetition, no new ground is covered — it’s the same perilous situations with the same thematic elements as play.  This film is a prime example of bloated filmmaking.  It simply did not need 142 minutes to tell this story.

As you sink lower into your chair and start to fight back some yawns, the emotional core of the movie falls numb.  By the end, you’ll feel unbelievably exhausted as there wasn’t enough personality for the film to carry you through its issues.  With a concise script, The Death Cure would have become a serious recommendation.  Its production design and action are too good to cast aside.  But, as currently constructed, Maze Runner: The Death Cure won’t advance pass being claimed as a decent cable watch.

Maze Runner: The Death Cure is slickly produced and well-acted, but its issues are deeply tied to the rest of the franchise.  In the end, the story of The Death Cure doesn’t do much to excite the casual moviegoing fan.  With its bloated runtime, the third movie in the Maze Runner franchise overstays its welcome long before the end credits fall over the screen.  The entire endeavor feels a bit unnecessary, retracing its own steps through a story that is just too thin for a full recommendation.

Fans of the franchise will feel some sense of satisfaction, but everyone else need not apply. Thanks for reading!  What are your thoughts on Maze Runner: The Death Cure?  Comment down below!

Dylan O’Brien is going to be a great revered actor soon. Awesome review by the way👌

I think so too! I love him in everything he’s in, even in smaller roles like Deepwater Horizon

My friends always make fun of me because when a movie comes out most of the time I’ve read the book first and they know that right off the bat I’m not going to be too crazy about the film adaption.

In book format, the Maze Runner series was well played out, and you got to know the characters and care about them. Of course, Newt was always my favorite character, and I think they made the perfect choice in choosing Thomas Brodie Sangster to play that role.

The first film, I thought was okay and for the most part, stuck to the book. But, the second film went off course from the book, and they took out some really great and creepy crank scenes.

Out of all of the films, I’d say that the third one was the best, but it did drag on toward the end. It all felt to romancy at some parts too which wasn’t as evident in the books. There was some romance in the books, but not like the way they had it in the film.

Not to mention I don’t think O’Brien and Scodelario had good chemistry.

You’re totally right about the limited chemistry! It felt as if the script just forces them to get together and they just weren’t about it ???

Maze Runner: The Death Cure was a satisfying conclusion to a captivating series. I started watching the films before I read the books and, surprisingly, I enjoyed the films better. As an author and an avid reader I’ve very rarely enjoyed a movie adaptation over the original novel. However the Maze Runner trilogy made all the right choices when it came to changes from the books…

I’m glad you enjoyed it!

Awesome review! I’ve been surprised by each of the Maze Runner films and think they’re definitely some of the best YA adaptations around. Please, if you get a chance check out my review (https://nerd-feed.com/2018/01/29/maze-runner-the-death-cure-review/) and let me know what you think.

I’ll have to check it out!?

I have so far really enjoyed this franchise. Like many of the comments state here, it’s one of the best YA adaptations. I am going to watch it, as I wantte know how it ends, but I will lower my expectations some what. As always, great review ?

not going to read your review yet. I’ll watch it first! ;)

That’s smart! Come back with some thoughts!

Out of all these dystopian YA film franchises, this was the only one that I liked.

All of the films are definitely watchable! I’d have no problem putting them on my TV in the background. Certainly better than Divergent lol

Interesting take on the final film. They’ve so far exceed my, admittedly very low, expectations for this franchise.

They’re definitely some of the better YA adaptations — each one is pretty watchable!