‘Everything Everywhere All at Once’: The Daniels’ Latest Is One of the Best Films Ever Made

No, I'm not being hyperbolic. 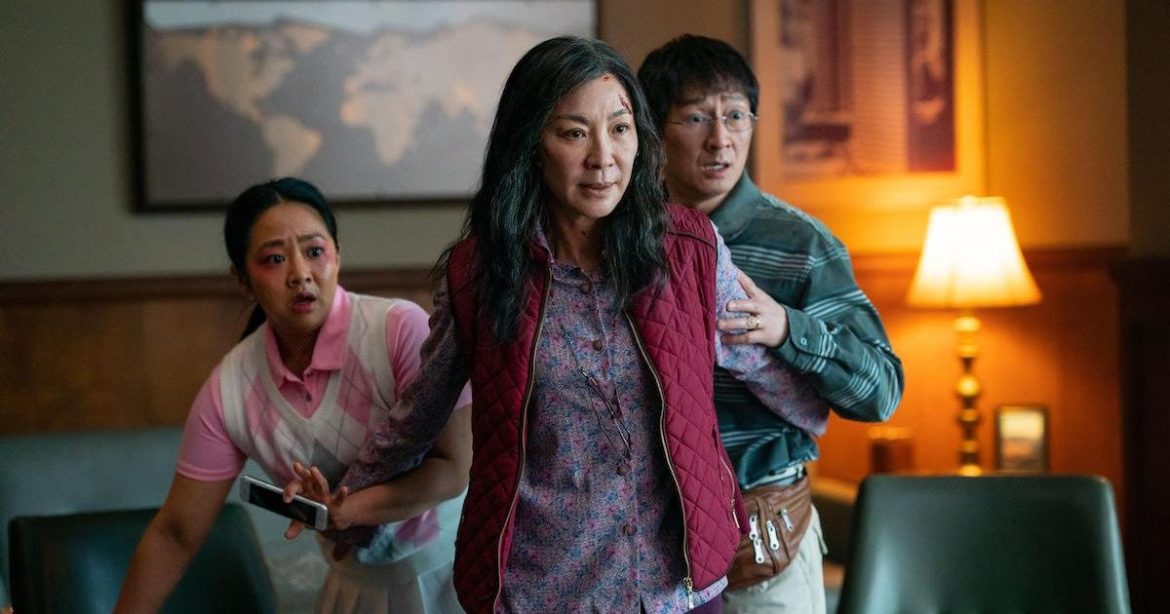 Sometimes a film comes around that is so deeply imaginative, so wildly entertaining, and so gut-bustingly hilarious that you leave the theater excited and grateful to have had the opportunity to experience it. These are only some of the feelings I had when leaving my screening of The Daniels’ Everything Everywhere All At Once, a film so good that I almost can’t imagine anything dethroning it as my favorite film of 2022.

Everything Everywhere All At Once follows Evelyn (Michelle Yeoh), a middle-aged Chinese immigrant who spends her time managing a laundromat with her husband Waymond (Ke Huy Quan). In the middle of her hectic life, Evelyn must go to meet with Deirdre (Jamie Lee Curtis), an IRS agent investigating her for tax fraud. However, before the meeting can even begin, Evelyn is met by a version of her husband claiming he is from the Alpha universe. He claims that she is the only hope in the multiverse to regain balance in the fight against a force that threatens the very fabric of our reality.

When I think of films that are bursting at the seams with imagination, I think of films like The Matrix, Akira, and Mad Max: Fury Road. Films so confident in their vision, that you feel completely transported into their worlds; even when things get complex and totally out there, you know that you are in capable hands with the filmmakers at the helm. Everything Everywhere All At Once undoubtedly joins this rank of films.

Everything I can think of to write about this film is going to sound hyperbolic, so I’m just going to start by saying that I cannot recommend this film higher, and I think it is essentially as good as it gets.

This is one of the best action comedies ever made. I walked in with high expectations, and they were exceeded on every single front. I think a large reason why is due to how this film puts character first. I loved these characters so much, and I cared so much for their fates and where they would end up. The film introduces very high dramatic stakes in the first five minutes between Evelyn and Waymond, and the film always puts character first even when things get mind-bendingly complex and we are thrown off the deep end into nutty science fiction land.

This film also features some of the best action I have seen in a film in quite some time. Every action sequence feels so high concept and has a set of rules that we are figuring out with our hero. There is an early action sequence involving a fanny pack that made me realize not only the level of creativity I was in for, but also how much the action scenes would complement the characters. There is a level of ingenuity on display in each of the action sequences that is unparalleled in modern cinema.

This isn’t to say that EEAAO isn’t full to the brim with heart. The final thirty minutes of this film are some of the most emotionally satisfying that I have seen. There are pieces set up that in a lesser film would amount only to an inconsequential gag. However, in this film, they are paid off in stirring and beautiful ways. It seems that between this and Swiss Army Man, the Daniels’ MO as filmmakers is to take things that on the face are unappealing, taboo, or utterly ridiculous, and weave them into something beautiful. This is a film where you will find yourself crying while characters on the screen have hot dogs for fingers, or a subplot involving a raccoon that I will not spoil. However, it is also a film that ponders on the enormity of everything, and our human scope in the face of something so big and often frightening. The fact that it can be both of those things is a miracle.

For my money, Michelle Yeoh is one of the greatest living actresses. She is consistently the best part of the films she is in, even as a supporting character. It is a beautiful thing seeing her take on a role that allows her to show her immense talent as an actress, and I already worry that this all-time great performance will be overlooked. She is funny, heartbreaking, at times cold, intelligent, and ultimately aspirational. I cannot imagine any other actress playing this role even a fraction as well as Yeoh seems to do so effortlessly.

Ke Huy Quan delivers his first performance in over twenty years here, and he is absolutely wonderful. I love Waymond so much. He is most certainly the heart of this film, and there are moments where I could feel my heartbreaking for him. Quan is so charismatic and charming that I will reassert what I said regarding Michelle Yeoh: I can’t imagine anyone else taking on this role. There are multiple lines from Waymond towards the end of the film where I was actively holding back sobs. This is a special performance, one that I feel so grateful was captured on film.

The supporting cast is additionally, fantastic. I want to mention Stephanie Hsu who is fantastic as Joy, the daughter of Evelyn and Waymond. Jamie Lee Curtis is a comedic powerhouse as Deirdre, who in any other film would just be a side character, but here is given an emotional arc and genuine care. Finally, James Hong is excellent in the role of Gong Gong. Each of these characters, and the many other tertiary characters, are handled with such love and care that it boggles my mind how Daniels pulled the emotional climax off.

There are so many more things I could say, because I love Everything Everywhere All at Once so deeply that I feel grateful to be alive in the time it was made. Rarely does a film of this caliber comes along, and it is even rarer in a market oversaturated by superhero movies, franchise films, and cinematic universes. This is a special movie. If you have made it to this point in the review, and you haven’t seen it, I implore you to do so. This film is everything.

Thank you for reading! What are your thoughts on Everything Everywhere All At Once? Comment down below!

Finally arrived here and oh my god it’s SO GOOD
Just the perfect use of cinema.