As Hollywood continues to drudge up old intellectual property to bring back to the big screen, we’re bound to continue to see modern takes on classic stories — and Sony Animation’s Peter Rabbit is just the latest example.  With pop songs and meta humor, this version of Peter Rabbit is very different from the story you know.  The following review will be spoiler free.

Directed By: Will Gluck

Written By: Will Gluck and Rob Lieber

After doing away with the previous owner of the McGregor estate, a young Mr. McGregor (Gleeson) comes to the countryside to see the house that he now owns due to a confluence of events.  Unfortunately for him, McGregor quickly realizes that the wildlife in the area (predominantly the bunnies) is a little scrappier than he imagined.  Led by Peter Rabbit, the band of bunnies look to rid the home of Mr. McGregor’s presence so that they can return to their beloved garden and enjoy all the food that the plot of land offers.

However, when their closest human companion Bea (Byrne) starts to fall for McGregor, the bunnies quickly realize that their plan might be a little harder than they initially thought.

Oddly enough, Peter Rabbit has had a difficult go of it even before it ever entered production.

Back in 2015, word got out that Sony was to distribute a Peter Rabbit film.  However, considering that the public became aware of this news via the Sony Pictures hack as part of the fiasco with The Interview, Sony was a little disgruntled to say the least.  Funny enough, Sony waited until December of that same year to finally make an official announcement.

The actual production of the film seemed to go along just fine.  But, many in the industry were furious once the first trailer for the film released.  Many  critics were appalled, saying things such as “there is no way on Earth that [Beatrix Potter would] have ever given the green light to a slow motion car crash like this.”  Even worse, one critic noted that  “if the movie lives up to its two-minute preview — [it] is set to be the greatest abomination to grace the big screen since The Emoji Movie.”

After the film released, a backlash formed with many claiming that the film was “allergy bullying” as it contained jokes made at the expense of a character with a blackberry allergy.

Domhnall Gleeson is Off the Rails as a Hilariously Cartoonish Villain

Domhnall Gleeson seemed keen on reprising his role as an over-the-top Star Wars villain as he’s essentially General Hux in Peter Rabbit.  As a high-strung former floor manager at Harrods, Gleeson as McGregor is focused on keeping things tidy and clean.  He doesn’t really ever venture outside his bubble, making every one of his interactions with another human hilariously awkward.

Gleeson understands what type of movie he is in, and he dials up the cheese factor to eleven for a villain that snarls with every attempt by the rabbits to take over his garden.  He’s clearly having a ball as this live-action cartoon character, yelling like his speech to the First Order in The Force Awakens.

This exaggerated behavior works nicely with his desire to “chill out” so that he can reclaim his rightful throne as the manager of Harrod’s in London as well as his interactions with Rose Byrne’s Bea.  Gleeson switches from one extreme emotion to another.  Whenever he’s onscreen, you can’t take your eyes off of him.  To put in bluntly, he makes Peter Rabbit watchable in some manner.

The Comedy as a Whole is Uneven

There’s a lot of physical comedy in Peter Rabbit that works very well.  The CGI bunnies send Gleeson flying all over the frame, attaching him to traps and shocking him with electricity that sends him back twenty feet.

Unfortunately, most of the humor outside of Domhnall Gleeson is to the lowest common denominator, relying on cheap gags that will only work if you’re between the ages of six and ten.

Oddly enough, Peter Rabbit is a very meta film.  Peter Rabbit will break the fourth wall and even declare his own character flaws.  While humorous from afar, these remarks actually undercut the emotion of the story.  By referring to their own flaws in a self-reflexive manner, the characters feel like two-dimensional cardboard cutouts of what Beatrix Potter originally planned for the story.

With limited emotion, Peter Rabbit is forced to entertain on a purely comedic basis.  In this critic’s opinion, it doesn’t work in that respect.

There’s a strong feeling of being talked down to in Peter Rabbit — it’s as if those involved were afraid that audiences couldn’t stomach a film with narrative weight.

Peter Rabbit is a difficult film to review for yours truly.  That feeling stems from the fact that there’s literally nothing to this movie.  The film is just human-bunny conflict leads to a turf war.  That’s it.

There’s no depth in any element of this movie.  Gleeson is fun as stated above, but that act isn’t enough to declare Peter Rabbit a worthwhile experience.  Peter Rabbit touches on the sad origins of its main character, but even those plot points are played for laughs.  Peter Rabbit makes such a concerted effort to remain light and fluffy that it forgets to add any complexity — leaving the viewer without a lasting impact.

Here lies the main problem of the film: this movie feels like it’s pandering to an audience that doesn’t have brain cells.  Peter Rabbit is subconsciously shouting “please like this movie” by resorting to the most bland and generic execution.  Not every film needs to have award-winning drama, but audiences should expect and desire more than what Peter Rabbit offers.

Instead, Peter Rabbit forces its audience to listen to one pop song after another in a never-ending vicious cycle.

Peter Rabbit will infuriate Diehard Beatrix Potter fans and average audiences might become annoyed.   Although it has its moments, Peter Rabbit is too willing to stoop to the lowest common denominator, playing everything for humor while failing to add an emotional core.

Peter Rabbit will do well with children, but adults may find themselves peering at their phone to see how much time is left before they can leave. 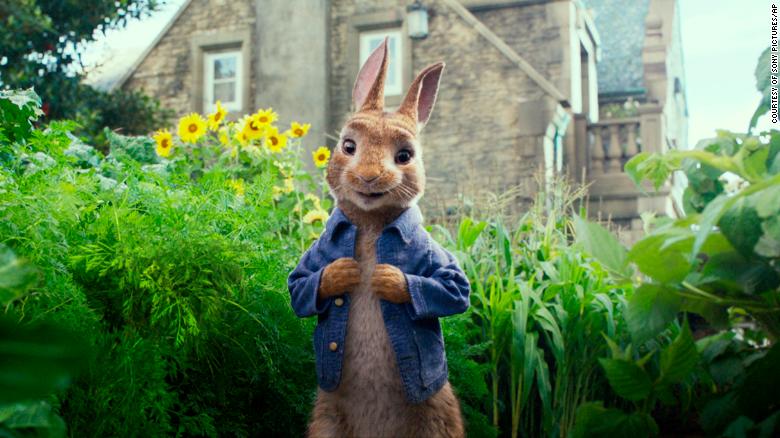 Thanks for reading!  What are your thoughts on Peter Rabbit?  Comment down below!

*Quotations via The Guardian and Metro.

“Pandering to an audience without brain cells”. Harsh, but I love it. May I use this?

??? absolutely! Feel free to share my articles whenever you want

Still haven’t seen it yet. Strangely wanted to though!