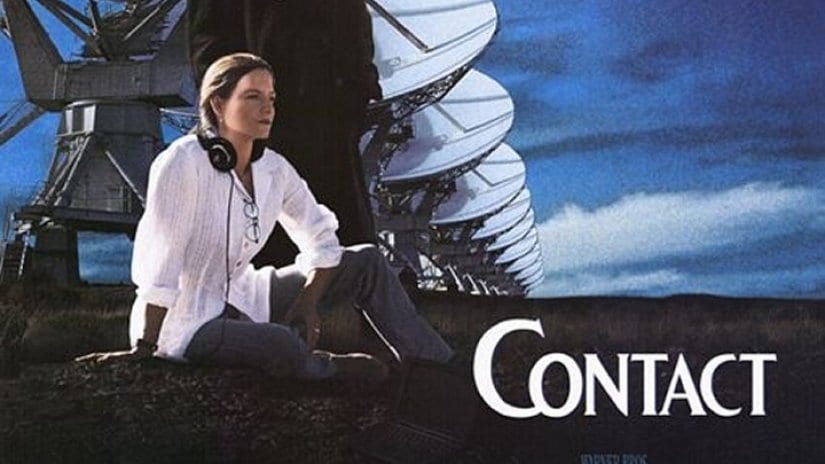 Questions of our place in the universe have been mulled over in film for decades, and few have been more famous than 1997’s Contact.  This sweeping epic was quite polarizing upon its initial release, but many have since began to appreciate the film’s shear ambition and scope.  The following review will be spoiler free. 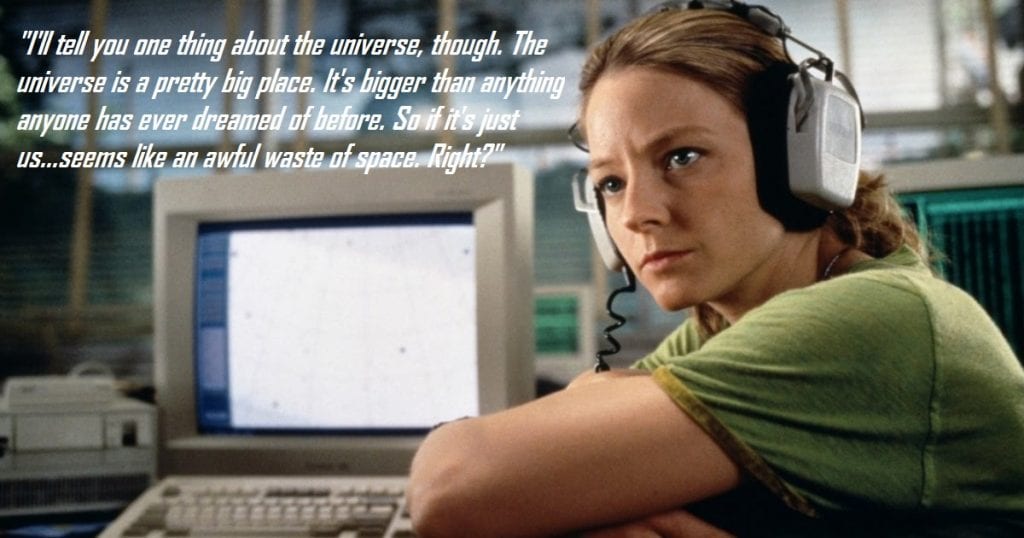 Contact is directed by Robert Zemeckis and has an all-star cast that includes Jodie Foster, Matthew McConaughey, James Woods, and John Hurt among many others.

Ever since she was a child, Ellie (Foster) has always had a fascination with reaching people from far distances, connecting with various people via radio.  Ellie enjoyed it so much that she eventually made it a career, spending her time trying to find messages from extraterrestrials.  One day, Ellie and her staff uncover an encrypted message from the stars with instructions for them.  With proper funding, Ellie may make the most important discovery in our existence: contact with other lifeforms in the universe.

Interestingly enough, Carl Sagan conceived the idea for Contact all the way back in 1979.  Sagan incorporated Kip Thorne’s study of wormhole space travel into the film, creating a relationship that is eerily similar to the creation of Christopher Nolan‘s Interstellar.

In fact, those that collaborated on the script made sure to make it as realistic as possible.  Jodie Foster’s character, Dr. Ellie Arroway, is based on Dr. Jill Tarter, a main player for the Search for Extraterrestrial Intelligence Institute (SETI) at the time of the film’s development.

The script was then offered to Warner Bros. where production would stall in 1982.  The project did not gain much traction until 1989 when a new writing team made some alterations to the script.  Funny enough, Robert Zemeckis passed on directing the movie in 1993 because he didn’t like the newest version of the script, turning the project over to famed director George Miller.  Unfortunately, Miller never started filming the movie because he was fired right before production started.

After swallowing their collective pride, executives at Warner Bros. went back to Zemeckis and offered him complete artistic control on the project, allowing Contact to finally begin filming.

A Grounded Look into Unfathomable Pursuits

Contact‘s script certainly feels like the work of a physicist.  It tackles very heady pursuits while remaining rooted in fact and reason.  The events of the film play out as if you are even watching a historical event in some moments.  Contact deserves all the credit in the world for accomplishing such a feat.

The film takes its time to properly setup the circumstances of contact with aliens.  In fact, it shows each major perspective that would probably come about if this situation occurred in real life.  Scientists try to explain the circumstance of the extraterrestrial communcation with reason.  People of faith attempt to explain this phenomenon through whatever religion they aspire to.  Government officials are worried of some global threat that might occur.  There’s also just crazy people that act, well, crazy.  Robert Zemeckis deserves much praise for somehow managing to give ample screen time to each train of thought.

Contact easily could have been sensationalized, but every bit of entertainment is heavily injected with realism.  In this case, this tone only adds dramatic heft to the central story.

This procedural would not have worked without fully realized characters to power the story.  Many fail to realize that Contact is predominantly about the build-up to reaching other forms of life.  Only a tiny portion of Contact‘s two and a half hour run time is devoted to interdimensional travel.  Most, if not all, of the film rests completely on Jodie Foster’s shoulders.  Luckily, she once again proves why she’s one of the best actresses to ever step in front of a camera.

Her character is the perfect combination of tough and thoughtful.  Others consistently look down on her, but that never stops her from chasing her childhood dream.  In essence, Foster is the embodiment of the film’s struggle between science and faith.  She makes a topic that could have been completely unrelatable into a deeply personal story. Foster also has a lovely, imperfect relationship with Matthew McConaughey‘s character.  They have their differences as any real couple would.  However, they are unquestionably fixated on each other, adding some much needed emotion to a deeply analytical story.

Each character has a quirk that makes them feel fully realized, amouting to a movie with more stakes because of attachments to multiple characters.

Maybe a Bit Too Convenient

For all its merits, however, Contact can’t help but feel convenient in its execution.  In order for this sprawling story to work, Zemeckis and his staff had to implement certain devices that ultimately manifest as “deus ex machina” moments.  Just when you feel that the characters are down for the count, an element that comes out of the blue saves the day.  Although these elements are setup in Ellie’s (Foster) youth, they can’t help but feel too coincidental.

These devices somewhat betray the realistic feel of the rest of the movie, making the story a little less believable than it deserves to be.  Contact could have worked even without the presence of such items, and it probably would have created a more streamlined narrative for moviegoers to enjoy. 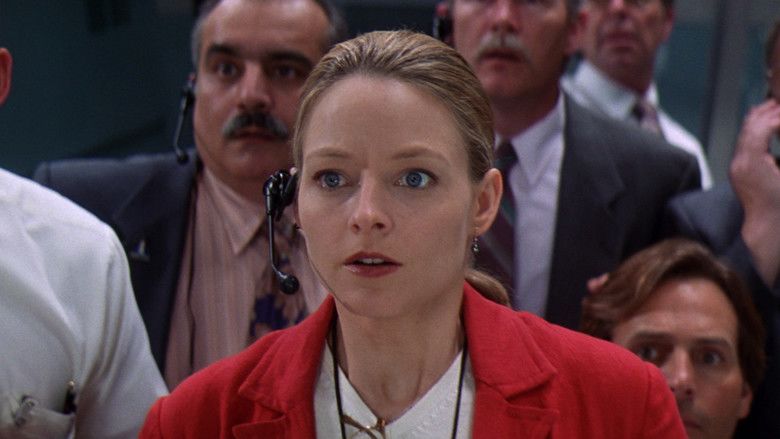 Contact is one of those movies that is sure to frustrate some.  It combines elements of science and faith into a film raises the biggest question on this Earth, leading to a conclusion that may make some viewers exclaim, “wait, that’s it?”  However, that’s not exactly what Contact set out to do.  At it’s core is the discussion of the balance between reason and belief.  And for that, Contact gets an A-.

This film works best as a thinking man’s science fiction adventure.  It may not answer all of your questions, but then again, what discussion of this topic would?

Thanks for reading!  What are your thoughts on Contact?  What movies do you want reviewed?  Comment down below!

My favourite film is Close Encounters and I think that Contact follows a number of its themes and makes an interesting companion piece.
Thanks for the review, as someone who doesn’t get to the cinema very often I love retrospective reviews of films.

Close Encounters is definitely a film I want to revisit soon. I haven’t seen it in quite some time!

Watched this movie kind of recently and found myself surprised at how well it held up. Absolutely a more cerebral kind of sci fi flick, but stuff like Arrival proves there is still an audience for it. Hopefully the new Bladerunner will fall in that category.

I read an article on Rotten Tomatoes that said that Blade Runner 2049 is getting incredibly positive initial buzz from critics so we’ll see!

I found “Contact” powerful on multiple levels. I remember that it wasn’t what I expected.

I think that’s how a lot of people felt when they first saw it. It’s definitely one of a kind!

Have you seen arrival yet?

I have! There’s a review on the site!

In my humble opinion it should be watched regularly by law……at least once a day ;)

Sorry Nick my comment was supposed to be in response to your Close Encounters comment………….however Arrival is also great………perhaps once a week for that one though

I know people who are frustrated by the film, but I enjoyed it.

It’s bound to do that. It doesn’t answer a lot of the questions it asks. People like to be satisfied in the end.

True, but to be honest- there isn’t exactly an easy answer to that question. I think it’s the type of film that is not for everyone – especially if you DO have a clearly defined stance on the subject.

As a note, I’m started to reach out and compile a writing staff for MovieBabble to grow the site and create more great content. If you want to join MovieBabble, head to this link and fill out an application: https://moviebabble971852905.wpcomstaging.com/join-moviebabble/. If I like what I see, we’ll be in touch!

I love this movie and I absolutely agree. That central issue of faith versus reason and whether the two are compatible is just irresistible. There are so few movies, and fiction books, that dare touch upon that subject.

Totally agree there! Jodie Foster is so great in this film, she puts the exclamation point on that discussion!

Right, and she’s not that cliche bolshy know it all. That’s how I know I like this director.

Zemeckis is really great. There’s an argument to be made for him being the best director of that time period.

The Top Thing You NEED to Know About...