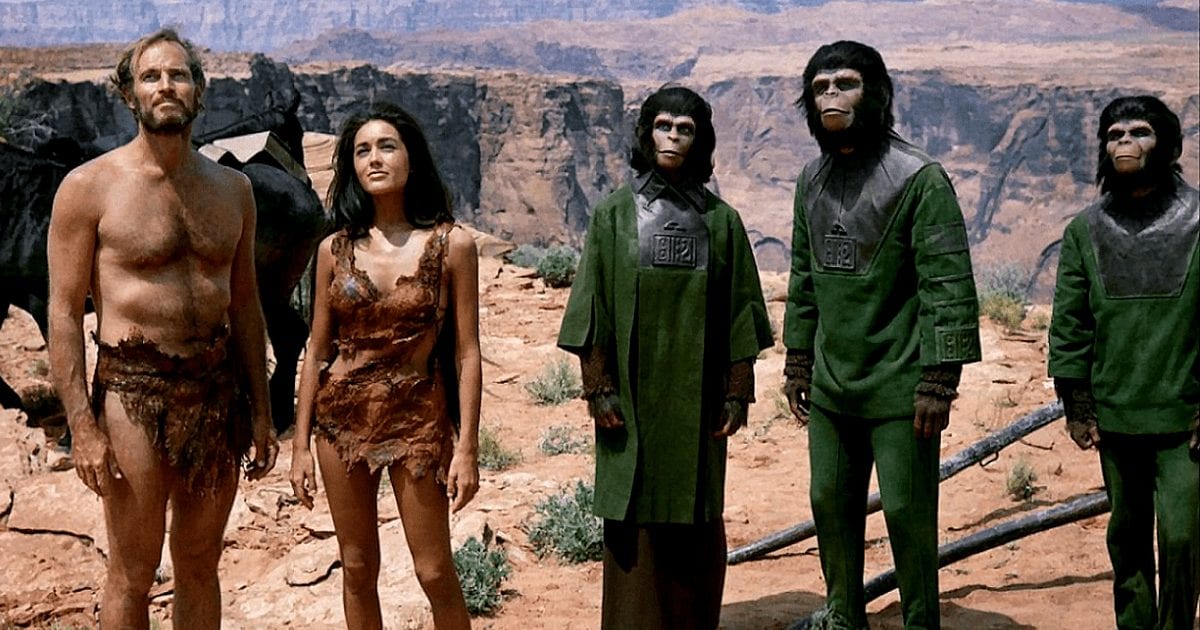 Whether its Curious George, King Kong, or Caesar, Hollywood seems to have a fascination with apes. In 1968, Charlton Heston helped usher in the next stage of this craze with Planet of the Apes. Fifty years later, the franchise is still up and kicking. The most recent iteration, War for the Planet of the Apes, made a respectable $490 Million at the box office. But this far removed from its debut, how does the movie hold up? By looking back on the franchise and evaluating what makes it so special, I intend to answer that.

Since this film is the one turning fifty, it’s only appropriate that it be the focus of today’s discussion. Starting off under Rod Serling, it was originally written as if it were an episode of The Twilight Zone. However, it later rewritten to correlate with a much smaller budget. Charlton Heston was brought on board after reading the script, and the rest is history. Heston plays an astronaut by the name of George Taylor, who lands on a mysterious planet inhabited by a race of  intelligent apes. Taylor quickly discovers that he is the only talking human, and tensions soon arise. Eventually Taylor is freed and sets out looking for answers. Those answers are delivered in one of the most iconic scenes in all of cinema. A devastated Taylor collapses into the sand and pounds his fists in rage beneath the remains of a demolished Lady Liberty.

Don’t get me wrong, I love this franchise, or at least 67% of it. The films approach these themes so differently that they are basically in two separate franchises at this point. The 1968 original is a broad thriller that tracks one man’s journey as he uncovers the horrors of society. The modern three (Rise, Dawn, and War) view those same tragedies through a different lens.

George Taylor’s arc is compelling because he helped created the society that eventually kills him. Caesar’s arc is compelling because we see those same tragedies, but as they happen to someone is more a bystander than an instigator. The originals explore how an individual can play a hand in the shaping of catastrophe. The newer films explore how those same catastrophes can play a hand in shaping the individual.

The Mother of All Spoilers

Even in its worst iterations (above), Planet of the Apes has always stood out for its make-up and special effects. From the rubber face masks adorned in the original, to the full make-overs sported in the 2001 reboot, and to the mo-cap breakthroughs of the prequel trilogy, the franchise always stands out. Not many films can continue to innovate in one subject over and over, but the Apes franchise has found its niche in this regard.

The series excels by taking the best techniques and talents of each film’s time and pushing them a step further. The make-up high points are especially pertinent with the with Helena Bonham Carter in 2001’s Planet of the Apes, and the prequel trilogy received three Oscar nominations for its motion capture effects with Andy Serkis and his company of digital apes.

Prequels are almost never better than the originals. Need proof? Take a look at the following franchises: Star Wars, The Hobbit, Harry Potter, Star Trek, the list goes on. There are only two exceptions to this rule; X-Men and Planet of the Apes. The original three X-Men movies are exactly on par with the prequels in terms of quality. The Apes prequels are superior when compared with the original three (or five) Apes movies.

Rise of, Dawn of, and War for the Planet of the Apes stand alone in this regard. Though none have the same shock factor as the original, they are an entertaining blend of popcorn cinema and thought-provoking science fiction.

Image via the Daily Beast

What Have We Learned?

The franchise has also taught us that Hollywood will keep up anything for fifty years if they think that money is to be made.

Thanks Fox, for the endless stream of sequels, prequels, and reboots that own the modern theater. Will Disney keep up this trend now that they own Fox?

Thanks for reading!  What are your thoughts on the Planet of the Apes Franchise?  Comment down below!

[…] bar for Planet of the Apes sequels (not prequels) is pretty low, but Beneath is the best, even if it isn’t very good […]

I always liked the Apes movies since I was a kid.I wasn’t expecting much when I got around to the new ones, so I was pleasantly surprised to find something so profound.

Interesting post. While i agree that the original Planet of the Apes was good and definitely had that shock value, the new prequel trilogy stands as testament to making something really interesting and more grounded than just humans vs. apes. I personally Dawn and War the most.