With lower budgets, most independent films are allowed serious creativity.  They can speak their mind freely, discussing themes in different — and sometimes edgy — ways.  The Orchard’s Flower falls squarely into this category, including themes such as sexual freedom and assault with a certain carefree, oddball touch.  Naturally, this approach has divided critics and casual moviegoers everywhere, and no one quite knows what to make of it all.  The following review will be spoiler free.

Erica (Deutch) is a rebellious, sexually open seventeen-year-old that lives with her single mom Laurie (Hahn).  However when they both move in with Laurie’s boyfriend (Heidecker), they have to help him look after his son Luke (Morgan) who has just been released from rehab.

After a few awkward interactions, Luke reluctantly tells Erica that his teacher molested him which later caused his spiral into addiction.  Upon learning of his past, Erica takes it upon herself to avenge Luke — by becoming a vigilante with her group of friends to go after Luke’s teacher.

The smaller the budget of the film, the more total control the filmmaker has on the project.  That’s the typical trade-off for films these days.  That doesn’t mean that your $250 million blockbusters are completely controlled by the studio — well, in some cases they are (let’s not open that can of worms) — but it’s no secret that films of that magnitude need to have a necessary component of mass appeal.  After all, the film industry is a business.

Move to the other side of the spectrum and you have films that only have to speak to certain audiences, allowing more creative freedom in the development stage.  With a budget of $500k, that’s exactly where Flower lies.  As a fairly new distributor, The Orchard has been going after low-budget, provocative films recently (need I remind you of the fiasco regarding Louis C.K.’s I Love You, Daddy last fall?), and Flower follows that mold.

Flower‘s ambitious take on sexuality has many critics stirring — both positively and negatively.  So while its budget would suggest that it would merely fade off into oblivion after a short theatrical run, Flower is sticking with audiences long after they see it — for better or worse.

Zoey Deutch is a Star

It seems as if a young actor is breaking out in a star-making performance every week at this point, but Deutch distances herself from the pack with an extraordinarily charismatic performance.  You may remember her as James Franco’s love interest in Why Him? (side note: that movie has not aged well due to recent events), but the writing of her character in that role was clearly supposed to act secondarily to Franco’s shenanigans as an eccentric billionaire. In Flower‘s case, the exact opposite occurs.  Not only is Deutch the jumping off point for almost every instance of comedy, she revels in the opportunity.

Deutch is the epitome of a spitfire, acting with a brazen exterior that envelops everyone around her.  Flower, among many other things, strives to show the divide between a sexual act and a sensation of feeling or attraction, indicating that you can have one without the other.  Deutch is the catalyst for such a discussion, unafraid to perform sexual acts with a sense of detachment that makes other characters (as well as the audience) quite uncomfortable.

On the surface, Zoey Deutch is magnetic, acting with a flair that is unrivaled.  She speaks freely, acts freely, and dresses freely.  Everything about her personality is manufactured without regard for everyone around her.  As she turns to a life of crime, her singular personality makes the ever-turning narrative that much more unexpected. 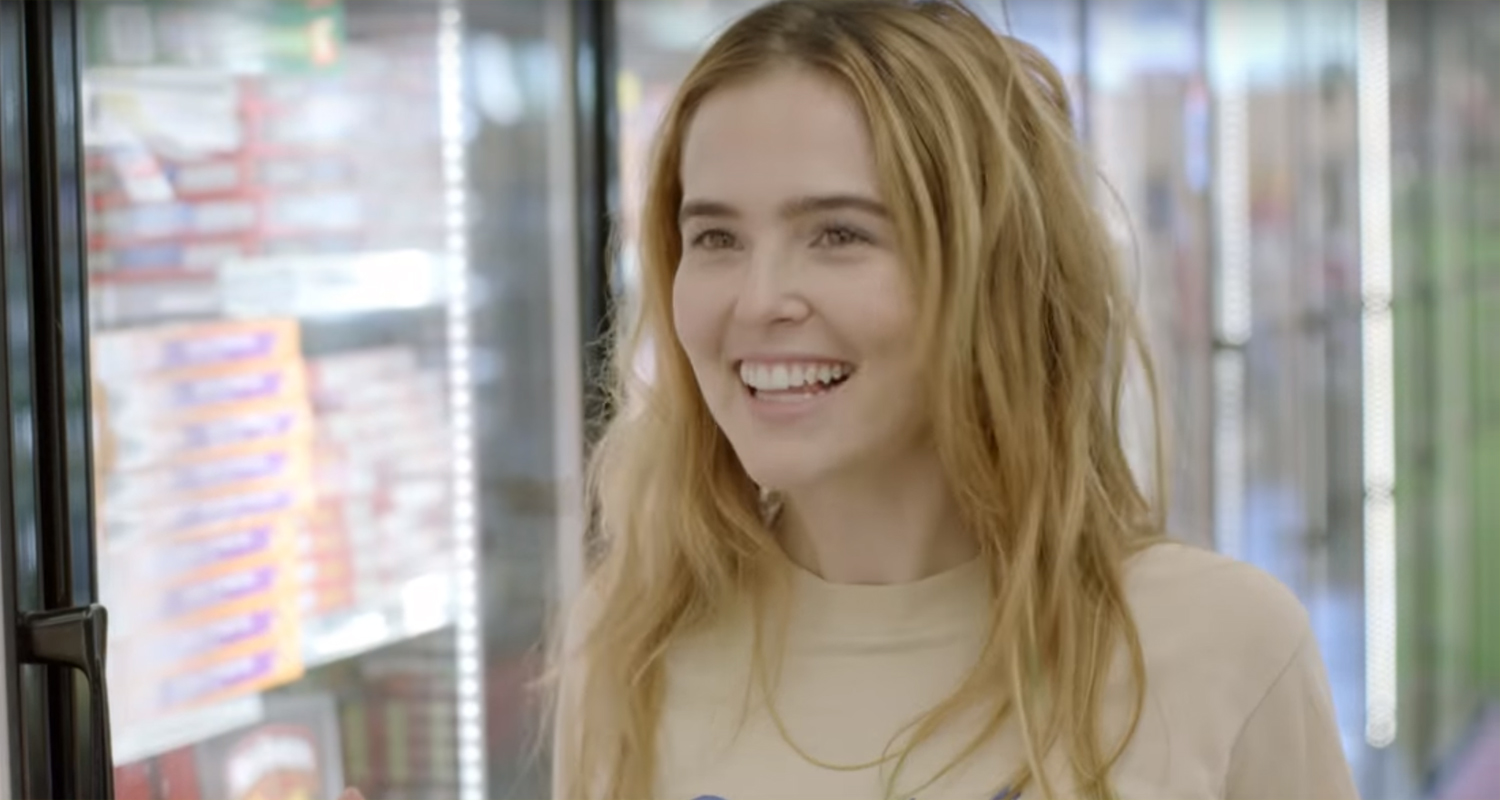 Depending on who you talk to, Flower is either “the movie we need right now” or complete and utter garbage.

From a cinematography perspective, Flower isn’t exactly pleasing.  Shot with a general haze and muted colors that drain the color from the actors’ faces, it’s clear that Flower is trying to keep you at arm’s length until it wants to bring you in closer.  However, it’s that journey from cold to pleasing that is causing discussion.  In fact, the word choice of “pleasing” in the last sentence is not apt whatsoever.  Flower is as pleasing as a root canal, but that’s precisely the point that director Max Winkler is trying to convey.

The film primarily handles the grey area that comes with sexual assault accusations.  Most individuals would prefer that this issue be kept black and white, but that is probably never truly the case.  We as outsiders can never truly know for sure what happened between two individuals involved in such as accusation, and this area is exactly where Flower operates.  Personally, that idea is very hard to hear, but that doesn’t mean it’s not a worthy discussion to have. 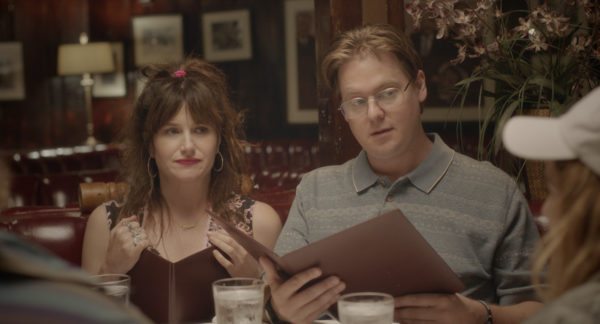 More Than Other Films, Flower Comes Down to Personal Taste

However, Flower expresses itself in such an uneven manner (although some of which is certainly by design), that it’s difficult to fully endorse.  With an emotionally detached core that covers rather sensitive subject matter, Flower defies the typical critical recommendation.  As you watch its events unfold, you’ll know fairly quickly whether Flower is for you or not.

Flower is a tough one to pin down.  From one perspective, the film fails embarrassingly in helping the audience grasp Erica as a character.  She clearly has a damaged psyche that comes about from a nonexistent father and fixation on male genitalia, and we never uncover why this might be the case.  However, on the other hand, Flower strives to create a serious discussion of sexual assault in which Erica is clearly the conduit for the discussion to take place. But, it then diminishes that behavior by approaching it somewhat casually.

That’s precisely where I struggle with Flower.  I simply don’t know.  Maybe that’s the intended effect.

But, Flower accomplishes something that most films do not: I will certainly remember it for quite a long time.  With the most basic, simple concept of artistic expression in mind, isn’t that what a creator should strive to achieve?  Flower will be at the center of analysis in film circles for quite some time, and director Max Winkler succeeds mightily in that manner.

It’s uneven, distasteful, and a little gross, but that’s mostly what Flower is going for, depicting the grey area in sexual assault that certainly is not easy to discuss.

But, whatever you think of the themes of the movie, Zoey Deutch is pretty unbelievable as a seventeen-year-old spitfire that lives to the beat of her own drum.  She has firmly placed herself in the group of great actors under the age of 25 to keep an eye on, and she powers Flower to a film that will certainly be remembered despite its inherent distasteful attitude. Thanks for reading!  What are your thoughts on Flower?  Comment down below!

[…] was also the first leg in the Netflix star machine, with actors such as Noah Centineo, Lana Condor, Zoey Deutch, Glen Powell, Jacob Elordi, and Joey King all increasing their fame […]