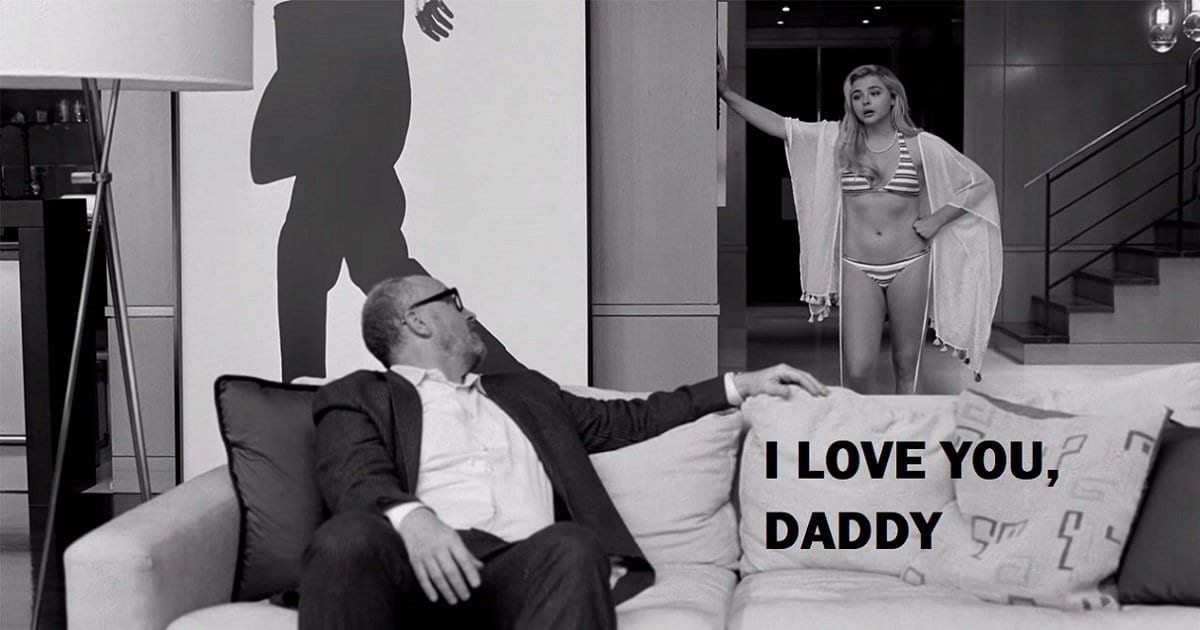 Louis C.K. has come under fire recently, and for good reason.  Allegations surfaced in November that pertained to lewd acts that the comedian committed in the presence of multiple women, causing the production company, The Orchard, to remove his already controversial film, I Love You, Daddy, from its theatrical release schedule.  And yet, the film still exists, even if many are trying to erase it from reality, making it a talking point for cinephiles everywhere.  The following review will be spoiler free. 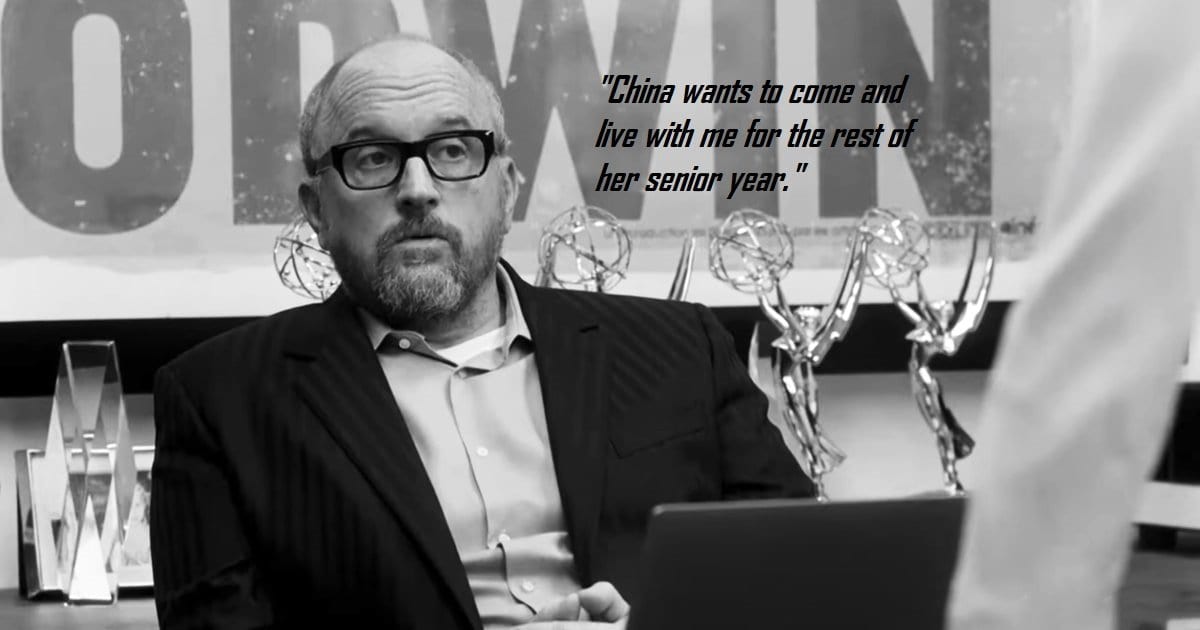 Glen (Louis C.K.) is a successful TV writer and producer that allows his spoiled daughter China (Grace Moretz) to stay with him at his apartment for the rest of her senior year.  However, quickly after moving in, China, a 17-year-old girl, starts spending a significant amount of with famed director Leslie Goodwin (Malkovich), a 68-year-old with a history of having relationships with very young women.

Glen becomes increasingly more panicked, unsure how to handle his situation since China normally walks all over him.  To keep his mind off of his daughter, he begins to court actress Grace Cullen (Byrne).  However, those insecurities never quite dissipate, forcing Glen to properly handle the situation as more information becomes apparent.

Well, I Love You, Daddy isn’t exactly what you would call a “lighthearted romp” given the current situation.  In a matter of weeks, Louis C.K. went from one of the best working comedic minds to a social pariah.  I Love You, Daddy was already a hot-button issue in Hollywood before the news about C.K. broke considering that it details the relationship between a minor and an elderly man.  But, since it was discovered that Louis C.K. had apparently masturbated in front of multiple women, the entire project felt almost too real.

The news forced The Orchard to pull the film or face an onslaught of horrible press themselves.  Eventually, Louis C.K. bought back I Love You, Daddy from The Orchard for the price of the production budget plus marketing costs, which included approximately 12,000 screeners that were sent out for awards consideration.

Recent events beg the question, can I Love You, Daddy be objectively enjoyed?  Or, will viewers always find it tone deaf?  Judging by the initial outcry aginst Louis C.K., the day where I Love You, Daddy is endeared may not come for quite some time, if at all.

Solid Performances from a Talented Cast

The talented cast that Louis C.K. assembled for the film certainly came to play, with each member standing out in there own way.  C.K. himself is a successful, awkward loser, lacking the spine and heart to truly become a good dad.  His daughter played by Chloe Grace Moretz and he have a very complicated, privileged relationship.  Although they have a great apartment and a private jet at their disposable, their inability to become tough with each other (mostly stemming from C.K.’s spineless nature) hinders their abilities to have a fully functioning dialogue about most things in life.  Watching their relationship twist and turn makes I Love You, Daddy moderately compelling on its own.

The rest of the talented supporting cast fills in the gaps, offering quirky, and sometimes odd, performances.  John Malkovich as the curious, older director is that guy that no one really likes: a self-righteous, pompous creative mind that sees the universe without absolutes or boundaries.  For his character, these traits work really well.

Then you have Charlie Day who’s being, well, Charlie Day.  And honestly, he didn’t need to do anything more than that. For his work behind the camera, Louis C.K. has essentially directed a love letter to Woody Allen’s Manhattan.  The black and white color palette and regal, old-timey score harken back to what Allen also harkened back to: a sense of timeless romanticism.  C.K. also utilizes a lot of very long takes, showcasing the subtle awkward mannerisms of each character that make every encounter feel a little more realistic than your typical Hollywood flick.  In that sense, I Love You, Daddy is actually refreshing.

But, that initial style falters, ultimately making I Love You, Daddy a film that is never as tantalizing as its headline-catching premise would make you think.  C.K. struggles with in-scene structure, framing moments with edits and camera movements that are very awkward, and not in the desired manner mentioned above.

The script suffers mightily in the end.  Louis C.K. takes two hours to tell an hour and a half story, adding enough fluff to lose the focus of the viewer.  As such, the romantic elements of the film never pop the way they should.  There isn’t a strong enough pull to keep even the most attentive watchers fully invested.  The result is an Oscar-hopeful that turns into Oscar bait. Ultimately Too Real to Enjoy

It’s really easy to bash Louis C.K.’s film given the allegations against him.  Given the plot of his film, it’s also easy to label him “a pig.”  However, different from other men under fire, Louis C.K. makes a concerted effort to label his character as a terrible human being.  With the odd sexual nature of I Love You, Daddy, some might even take a leap and say that the film is a cry for help.

Yet, I Love You, Daddy gets way too close to real circumstances for you to properly separate the art from the artist.  This notion isn’t because I Love You, Daddy is a vulgar, vile movie that transcends the label of “risque.”  In fact, the entire movie is quite classy and restrained in its execution.

The only way for I Love You, Daddy to escape current events was to provide a transcendent, thoughtful, and poignant discussion of relationships and feelings through its off-kilter lense.  Sadly, everything about this film is unremarkable, leaving Louis C.K.’s allegations as the only fascinating thing for audiences to remember, forever linking them together in way that won’t ever become appealing. 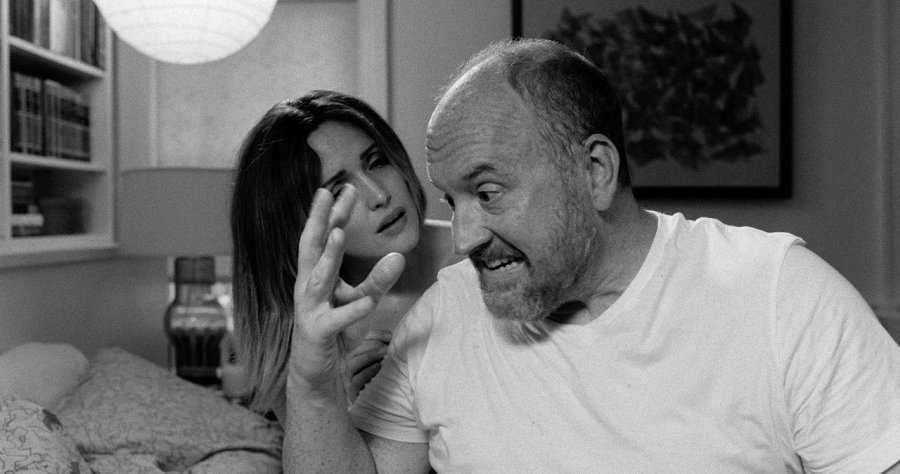 Compelling art can become the ultimate distraction.  If I Love You, Daddy was a great film, audiences would eventually declare it so.  However, bland storytelling and composition will lead to Louis C.K.’s personal life always becoming the story whenever I Love You, Daddy is mentioned.

Louis C.K. has proven that he’s progressed as a storyteller since directing Pootie Tang back in 2001.  I Love You, Daddy, while not a flawlessly directed film, boasts serious style and performances that are quite impressive.  And yet, the story meanders, lulling the viewer into a pit of 1940’s nostalgic mush.  This movie is pretty average by standards set in Hollywood.  It gets a C.

But, let’s be honest, I Love You, Daddy is unnerving given current events.  Its situations will make one cringe at times, and not by the design of the film.

One of the biggest question people ask filmmakers is “who is this film for?”  Currently, I Love You, Daddy is for no one.  Will that sentiment change in time?  Maybe, but the film itself is too unremarkable to sway the needle either way, leaving audiences cold for multiple reasons. Thanks for reading!  What are your thoughts on I Love You, Daddy?  Comment down below!

I’m constantly left with the question these days: do you condemn art due to the actions you of the artist? I mean, weren’t most amazing artists twisted in some way? Do their actions take away from the art they produce, or do they lend a new quality/aesthetic/philosophy to the art?

I’ve written about this before. It honestly comes down to the individual. Each person needs to figure it out for themselves and he prevailing thought will come through in the end. People like Mel Gibson were allowed back in Hollywood because a collective of people let him back in, the same goes for everyone else.

This sucks because I heard how well it was doing at Tiffs and was looking forward to seeing it. Then Louis CK started getting accused as a pervert and the film was never released to a wide audience.

This is definitely a film for snobby critics that love the old Hollywood style. But, there just isn’t enough substance there for anyone else not fueled by nostalgia