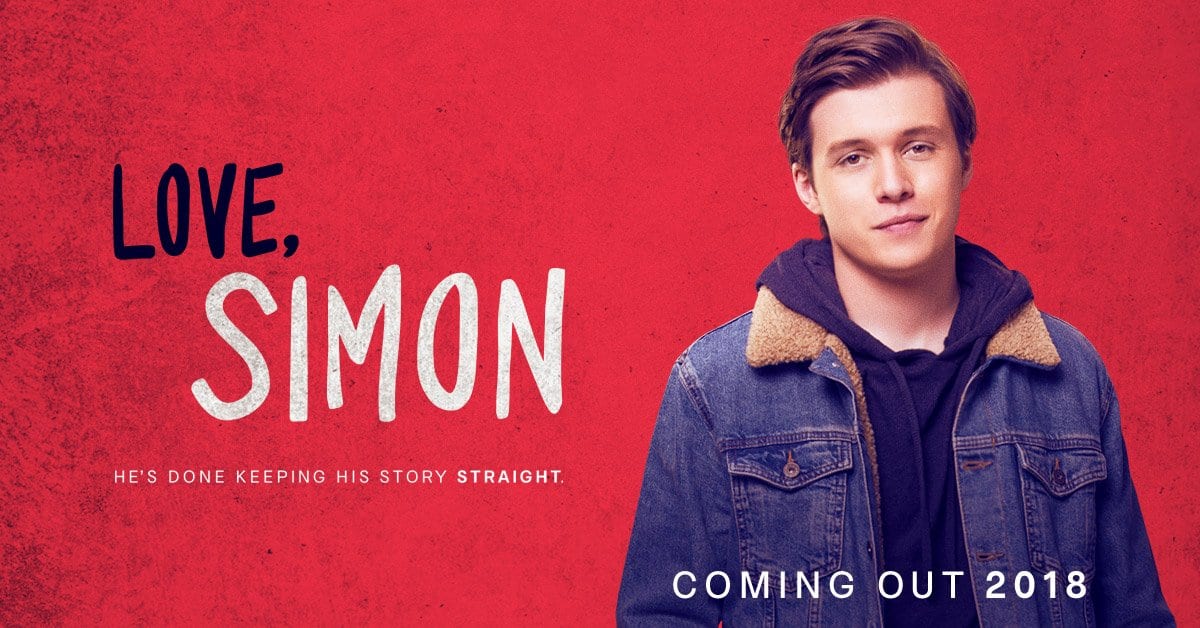 Storytellers and filmmakers are growing more fascinated by the second with telling stories of individuals who were once thought of as members of the fringes of society, putting more time and effort into the creation of empathy for those people who absolutely deserve it.  The latest example is Love, Simon, a coming-of-age film that looks to take down the idea of difference and fringe societies — and show that everyone deserves a love story.  The following review will be spoiler free. 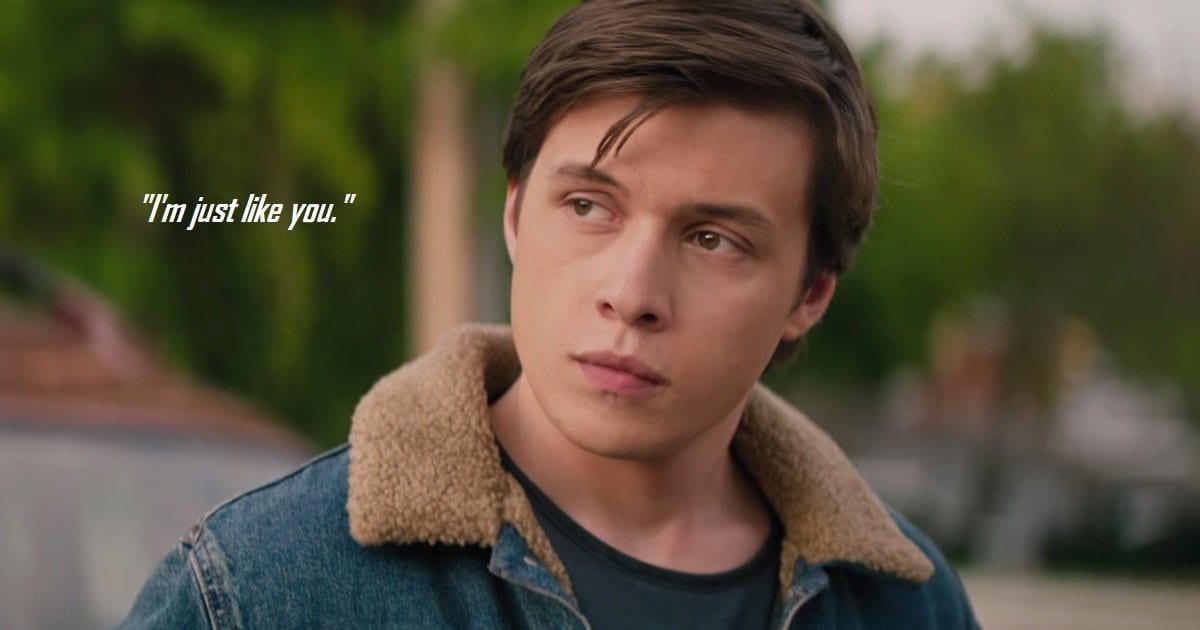 Simon Spier (Robinson) has a pretty standard life.  He has a family that he thoroughly enjoys and great friends with which he does just about everything.  However, Simon has a pretty massive secret: he’s gay.  Unsure how to share his secret, Simon keeps it to himself.

One day, an anonymous guy from Simon’s high school, using the alias “Blue”, posts online that he’s gay as well.  Simon quickly reaches out to Blue under an alias of his own, leading to a chain of emails between the two.  While neither person knows the other’s name or appearance, they start to fall for each other.

For Simon’s love story to come true, he must find a way to become true to himself and those around him.

Naturally, people are pointing towards Love, Simon as a culturally significant film.  After all, it is the first movie distributed by a major studio to focus on a gay teenage romance.  Based on the novel Simon vs. the Homo Sapiens Agenda, the film looks to take the broad, sweeping feel of rom-coms in a strikingly new direction…obviously.

With every culturally significant movie comes a discussion of importance vs. greatness with many confusing and mixing the two distinctions.  Many critics have taken towards giving positive reviews to films based solely on the fact that they achieved some bar of production diversity or narrative inclusion without taking note of the filmmaking itself.  An important movie is not always good and a good movie is not always important in the grand scheme of things.

If you’re excited for a movie that highlights a certain people or line of thinking, that’s great!  As a wise philosopher once said, “you do you.”  But, claiming a movie as great based solely on the fact that it’s important diminishes the art of film criticism — and the artistry of the techniques that the people involved with the film utilized.

That being said, Love, Simon is pretty wonderful, so this discussion might be more apt for another motion picture.

An Infectious Cast Leads the Way

The key to any romantic comedy such as Love, Simon is a strong dynamic from the cast, and all the players here are more than capable.  Leading the way is Nick Robinson who puts in a star-making performance.  You may remember him as the creepy older brother in Jurassic World, but Isaac Aptaker and Elizabeth Berger’s script allows Robinson plenty of room to flex his acting muscles.  Love, Simon is mostly light-hearted, but there are moments of serious stakes and drama where Robinson shows what he’s made of.  His insecurities are felt with every veiled smile, becoming a relatable individual to all people who once struggled with young love — not just to other members of the gay community.

Like with any other movie that casts actors in their 20’s to play high school students, these actors aren’t very believable as teenagers, but they are undeniably sweet and caring.  The main cast creates a feeling of tenderness with an endless sense of optimism and love of camaraderie.  As is the point of Love, Simon altogether, Simon’s friends are loving, accepting, and nurturing, putting the onus on Simon himself to find his own way.  It’s not just about coming out, it’s about the individual finally reconciling this life altering process in their own head space.

To sum up, you want Simon and the rest of his crew to succeed every step of the way.

Love, Simon Tackles a Prickly Subject to Some With Grace and Respect

Society has shown a desire to become more progressive in recent years, and with that has come some very heavy-handed stories.  There’s certainly elements of Love, Simon that are overtly saccharine, but the film remains charming through well-developed characters and a surprisingly smart sense of humor.  Love, Simon‘s ultimate goal is to tell every single viewer to be true to themselves (the marketing material would say that it’s to show that “everyone deserves a love story,” but I digress).  In that regard, it plays the narrative straight (no pun intended) — allowing everyone to relate to the feeling of finding love or becoming true to themselves.

But what sets Love, Simon apart from others like it is a biting sense of humor.  Blending melodrama with searing wit and cruelty makes for some hilariously awkward (and human) moments.

Love, Simon is pure cinematic joy, pleading with everyone to become the best version of themselves.  It’s the definition of a crowd pleaser.

Love, Simon is Clearly Manipulative in the Way It Handles Itself

There are more or less two types of romance movies: incredibly realistic and unflinchingly sappy.  Love, Simon is most definitely the latter, meaning that it works its tail off to mold each scene to its desired emotional impact — for better or for worse.

Movies get flack for being very sentimental, but that’s not the issue — manipulation is the main problem.  Love, Simon is slightly overwritten in that sense, forming scenes that are scientifically engineered to get a collective tear from the audience.  Greg Berlanti takes movie magic to an extreme level of sweetness — the sensory overload is sometimes too much to handle.

The nebulous “they” often say that true beauty lies in asymmetry, yet Love, Simon did everything it could to feel absolutely perfect.  “Staged” is a good word to attribute to this film.

Movies with a clear stench of manipulation can only reach a certain level of cinematic height.  The way I see it, Love, Simon is unquestionably a stand-up-and-cheer kind of movie.  Still, its occasional forced delivery will have many describing the film as merely “cute” — and that’s a tad unfortunate, don’t you think?

It too often borders on sappy, but Love, Simon is a triumph nonetheless.  Nick Robinson’s fearless performance in the lead provides a character worth cheering for, making the entire journey that much more fulfilling in the end.

Love, Simon won’t appeal to some people due to its subject matter — as disappointing as that is to say.  But, this film is going to brighten the days of millions of people and become a serious crowd pleaser.  Sometimes, that’s exactly what we need as a collective.

Thanks for reading!  What are your thoughts on Love, Simon?  Comment down below!

They mentioned this movie in Riverdale, and I was wondering if it was worth watching & it sounds like it is! ?