Although Star Wars: The Last Jedi is dominating the discussion among film fans, there was another film to get a release over the weekend of December 15th, Ferdinand!  The classic story of Ferdinand the bull comes to the big screen in hopes of supplying lovely, child-centric entertainment for the holiday season.  The following review will be spoiler free. 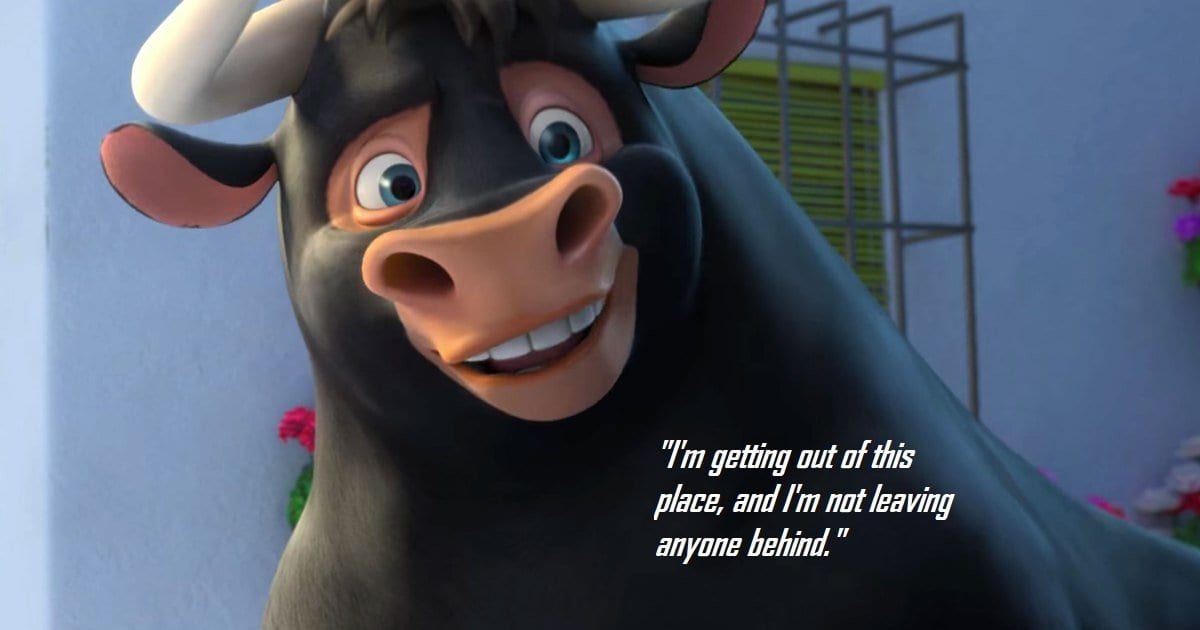 Although he’s massive, Ferdinand (Cena) has always enjoyed the calmer side of life.  He enjoys smelling flowers, playing with his friend Nina, and sitting under a tree and watching the sunset.  But, Ferdinand is captured and taken to a ranch where he’s bred to become a fighting bull due to his monsterous size.  While at the ranch, Ferdinand teams up with a band of misfits and quickly hatches a plan to escape the ranch to roam free once again.

By now, you’re probably aware that Disney purchased 21st Century Fox, gaining the rights to all of its movie and television properties and outlets.  The $52.4 billion deal is a landmark event in the industy and points towards an entirely different film landscape in the near future.  The deal will take another 18 months to finalize as it goes through intense vetting by multiple governing bodies.  However, the proposed deal puts Blue Sky Studios, the animation arm of Fox, in a precarious position.

Disney will undoubtedly lay off Fox employees after the deal is finalized to avoid redundancies in the corporation.  The media conglomerate already has two animation branches in Walt Disney Animation Studios and Pixar.  Is Disney willing to have three animation studios distributing content?  I certainly don’t think so, especially with two superior studios that have a much better track record.  It’s obviously based off of some speculation, but Ferdinand might end up becoming one of the last movies that Blue Sky Studios ever makes, meaning that you probably won’t get another Ice Age movie.

John Cena is Perfect as Ferdinand

Sometimes, actors are perfect for certain roles, and John Cena’s turn as Ferdinand is a great example of such a circumstance.  For those unaware of the classic child’s story, Ferdinand is a prime example of a gentle giant.  He lives by a personal creed of pacifism, doing his best to even keep flowers from being trampled by bucking bulls.  Cena understands what it feels like to have stares in his direction due to his hulking appearance.  That feeling comes through the his character with almost every piece of dialogue.  There’s an undeniable sweetness to his voice throughout Ferdinand‘s story that’ll keep you invested in this story full of bulls.

Cena provides an odd energy to the voice of Ferdinand that makes the movie work a lot better than it probably should.  You can’t help but fall for Ferdinand.  He stands for so much hope and kindness as an animal that stereotypically goes in the exact opposite direction.  You want Ferdinand to succeed for this very reason. Some might accuse Ferdinand of being excessively fluffy, but there’s no denying its charm.

Let’s face it, modern times have been such a downer recently.  News stories break left and right about the latest awful developments, putting people into only a lesser, more hostile mood.  But, sometimes, film has the magical power of escapism, which Ferdinand does to a degree by being endlessly hopeful and sweet.

Children will enjoy the “don’t judge a book by its cover” motif that’s almost a little too obvious for older viewers.  Shockingly enough, there’s even a discussion of animal cruelty thrown into the middle of the plot that works fairly organically.  When the Spanish-themed strum of a guitar washes over the screen as Ferdinand loves another being, it’s pretty difficult to not appreciate the film on some level.

Sometimes, all you need is a harmless movie that can provide a break from the real world for an hour or two.  Ferdinand can certainly offer that quality to willing viewers.

However, Ferdinand doesn’t really do much with its themes to make the film entertaining for older audiences.  Children will enjoy the sweet relationships and an impromptu bull dance-off (yes, you read that correctly), but adults may start to roll their eyes and become overwhelmed with the sensation to check their phone rather than continue to watch some more uninspired animation.  Familiar themes are forgiveable in film.  But, refraining from doing anything interesting or creative with those themes is fair game for ridicule.

You have your typical humorous sidekicks that all animated movies contain combined with requests for inclusion that become more generic by the minute.  Ferdinand even has a character escape from captives by jumping onboard a cargo train which can ultimately act as a microcosm for the entire movie.  You’ll never be in doubt as to where the story is headed, removing what little stakes the film has.

Hamstrung by common story bits, Ferdinand relies on its colorful characters to get by.  The problem is, however, that some of these animals become increasingly grating on the nerves, led by Kate McKinnon’s Lupe, a goat that never ceases its infuriating chatter.  The writers attempted to add other ancillary characters such as German-voiced horses (because when I think of horses, I think of Germany) and a bull made in a laboratory.  These choices are not only baffling, they’re downright annoying.

image via The Peoples Movies

Ferdinand does so little to stand out from the crowd that it makes reviewing it very difficult.  I’m grabbing at straws over here!

Ferdinand will surely please its intended audience with its mostly light and fluffy nature.  But, for those older than the age of ten, you’ll quickly put the film out of mind.  This animated flick retreads the same old idea of “you can’t judge a book by its cover” without doing anything smart or overly creative.  Instead, you’ll be treated to the usual gags that hundreds of animated films have done before.  It gets a C+.

I’d be lying if I said that there isn’t some entertainment value in Ferdinand.  John Cena embodies Ferdinand, offering a solid lead character to get behind.  For the best moviegoing experience, be prepared for a film that won’t reinvent the wheel.

Thanks for reading!  What are your thoughts on Ferdinand?  Comment down below!

The previews for this movie makes it look good and your review sounds good too. Wish a movie theater was closer than 25+ miles. Oh well. Saves me money. LOL

Lol there you go! Wait until HBO or Netflix!

Maybe tv? Don’t have Netflix or HBO. Can you believe it?

Yes. It better hurry up and get to tv.

I guess it’s better than how the trailers depict it. I feel Disney might shut down Blue Sky Studios!

I do too, they don’t have much of a library to pull from!