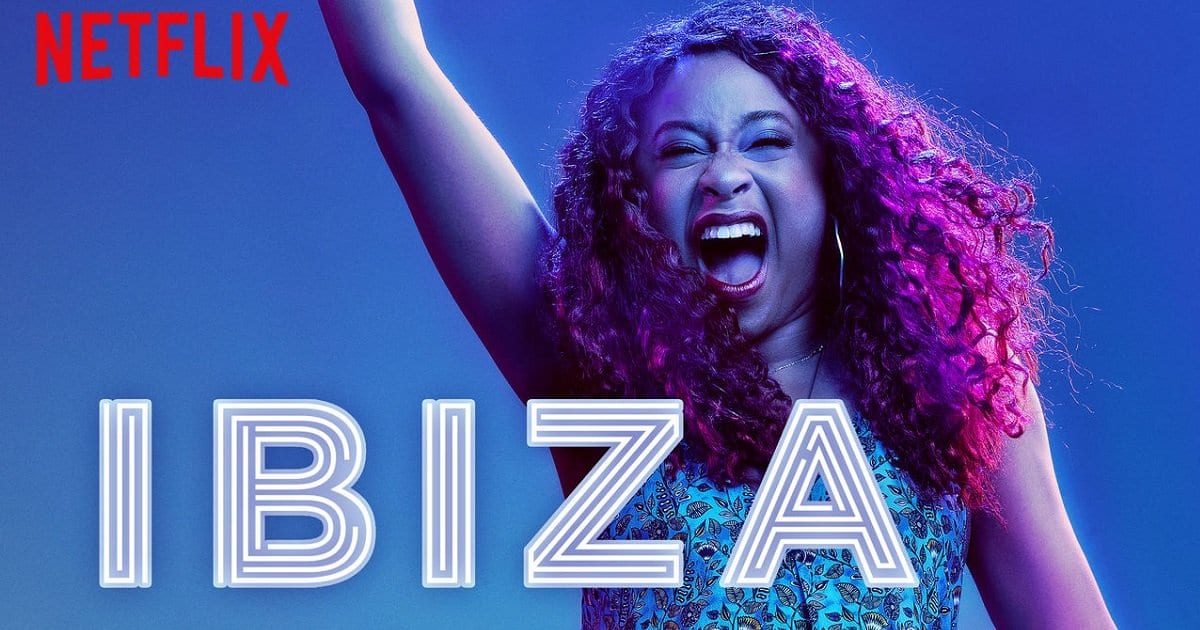 There are a few actors that are vastly underappreciated in today’s content climate where studios spit out a movie faster than Bryan Colangelo deleted his burner accounts following an extensive report by The Ringer (you should read this absolutely bonkers story — but after you finish this article, of course).  One of those actors is Gillian Jacobs, and her new Netflix film Ibiza offers her the chance to show her stuff in a leading role.  And while she takes advantage of the opportunity, Ibiza doesn’t quite know what do with her.

Harper (Jacobs) has worked at her current place of employment for quite some time, and her boss is finally sending her out on a business trip to score a high-profile client.  Although Harper’s excited for the opportunity, there’s just one problem — her friends (Bayer and Robinson) are tagging along for the trip.

Harper is naturally a bit apprehensive about the situation, but her mood changes when the trio heads to a local club where a famous DJ — Leo West (Madden) — is playing.  Harper and Leo hit it off immediately, but Leo has to leave to play his next gig in Ibiza.

With support from her friends, Harper races off to Ibiza to see Leo again, but it puts her meeting with the client in serious jeopardy.

If you watched the cult hit show Community, you know and love Gillian Jacobs as the quirky actress that she is.  But for everyone else, she might amount to “ohh, that girl!”

Jacobs has never had trouble finding work, but she hasn’t exactly hit the big time like some of her counterparts — and maybe that’s not her goal as a performer.  Whatever the case, she’s flying under the radar, and it’s about time that she got the attention she deserves.  She’s a lovely performer that is suitably quirky and odd in just about every performance.  Maybe that’s not the path to general fame and regard by casual moviegoers, but it’s wonderful to see an actress that revels in being off-kilter.

By the last section of this article, you probably could have guessed that I would claim Jacobs as the best part of the film.  But, putting as much of my personal bias aside for this critique, she truly deserves praise for her work.

Ibiza is fundamentally a familiar story — this isn’t the first time we’ve seen characters journey through Europe to find love.  The film even doubles down on familiar elements by having the characters attend sexually stimulating parties while doing copious amounts of drugs that are popular in the region.

But, Gillian Jacobs adds a certain flair to the movie that only she could offer.  As a woman that’s a little out of her element, every one of her motions is just a bit off.  It’s not quite normal, making rather tired sequences just a bit zanier.  There’s something distinctly vulnerable with the way she carries herself, and it makes the romance at the center of Ibiza quite sweet and deserved.  Ibiza is pretty underwritten (more on that below), so every bit of charm that it has to offer comes from the actors (a special shout out goes to Richard Madden for a delightful turn as a DJ with a heart of gold), and Gillian Jacobs leads the way. With a plot that follows a group of girls prancing through Europe in search of a DJ, you can be sure that electronic dance music plays heavily into the feel of the film.  Massive crowds dance with a drug-infused, free nature as lights flash across the screen.  Essentially, Ibiza might be a pulse-pounding experience for anyone with a serious home theater setup.  And yet, I found myself wanting more from this artistic choice.

I’m sure plenty have already groaned at the prospect of a film where drugs and EDM are key to the environment — I even groaned during the movie itself.

For a movie that will turn people off before they ever see it, why not dig deep into the EDM lifestyle with a plethora of psychedelic, kaleidoscopic raves that put the viewer into the minds of the characters?  Because as it stands, Ibiza just plays remixes of Despacito while having actors exclaim how intoxicated they are rather than show it through inventive means.  If you’re going to create a story where a bunch of privileged white people party in Europe, embrace it fully!  Take it to the nth degree and make it a hallucinatory thrill ride.  As constructed, Ibiza is just too safe, and it’s a serious detriment to the overall product since it includes so many extended clubbing sequences.

Ibiza is Too Underwritten to Recommend

A talented cast keeps Ibiza afloat far more often that it should but it’s still far too sparse of enthralling content.  It’s clear that the actors are spinning their wheels in each scene to create entertainment.  It’s most obvious with Vanessa Bayer who, while immensely talented, is clearly grabbing for any bit comedy that she can get her hands on.

Bayer and every other character are painted as eccentric without much else.  It creates an atmosphere where everyone is riffing off each other while trying to one up other actors with their own brand of improvisation.  No one is comedic “straight man,” and it might become irritating rather quickly for audiences.

Not to mention that there isn’t much conflict to Ibiza‘s story.  Attractive men immediately swoon over our three leads and every bit of adversity is quickly fixed.  It’s truly a shame since Ibiza had the opportunity to act as a fun story that focused on girl power.

Gillian Jacobs is great, but she can’t save a film that is lazily written; its shockingly full of fluff for a 94-minute long movie.  You get the sense that director Alex Richanbach had trouble deciding between making a raunchy comedy and a heartfelt rom-com, and Ibiza feels like a film that is riding the line between the two without ever making a firm decision.

Ibiza had the potential to become a fun story of spontaneous emotion and girl power, but, in the end, it’ll most likely leave the audience wanting more. Thanks for reading! What are your thoughts on Ibiza? Comment down below!