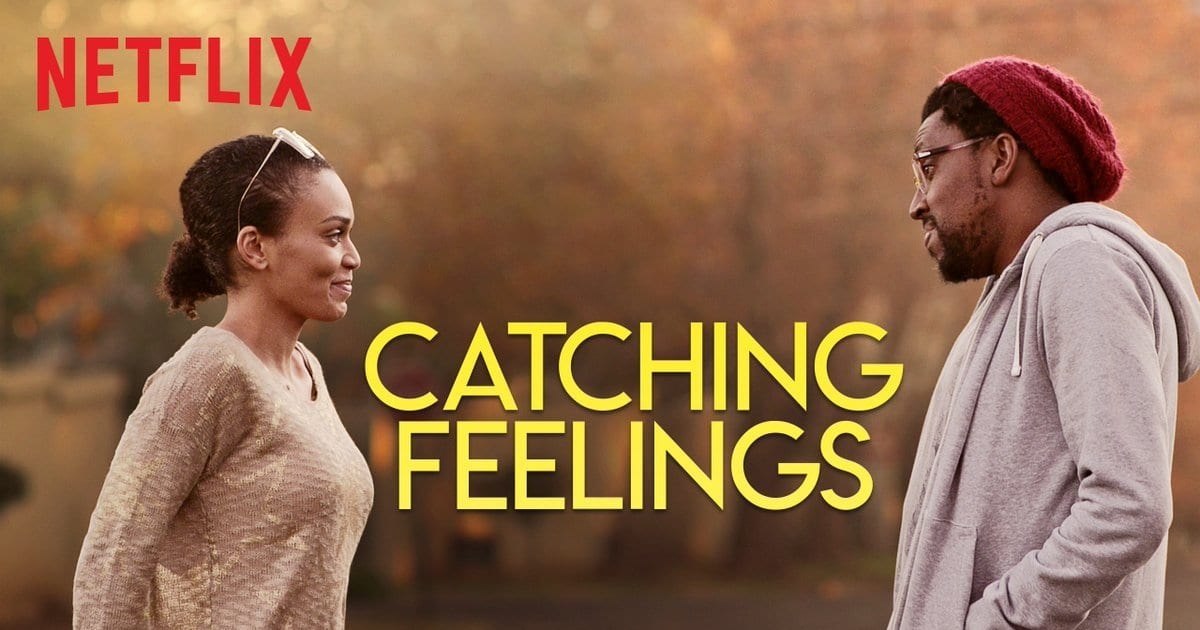 Every piece of content distributed by Netflix feels like a calculated ploy to get more subscribers these days, no matter how artistic or worthwhile the film is in the end.  Their latest release — Catching Feelings — clearly has subscriber growth in mind as a smaller, international film from South Africa, a country that rarely gets the spotlight in the entertainment industry.  Yet, while Netflix is hoping for more subscribers from the coveted(?) South African market, Kagiso Lediga, the writer, director, and star of the film, hopes that he can use Netflix’s platform to grow his career.

Although he once wrote a very popular book, Max (Lediga) is still living a rather humdrum life.  Living off a professor’s salary as an English teacher at a local university, Max and his wife Sam (Thusi) struggle paying the bills, and they wish they could find a way to continue to live in their overly expensive apartment in Johannesburg.

However, fellow writer and socialite Heiner (Buckland) moves back into the area after a long haitus, mucking up Max’s life even more.  Even worse, Heiner runs into health issues.  Without anyone else to look after him, Max reluctantly agrees to let him stay in his apartment.  But, Heiner is quite the womanizer, and he’s always looking to have sex.  The growing possibility that Heiner could sleep with Sam — well, it’s at least growing in Max’s mind — rocks Max to his core, and he begins to act irrationally.

Despite reports that Netflix will release over 1,000 original series/films by the end of 2018, Catching Feelings is the first South African film to become available for streaming in South Africa.  As of now, the only other South African piece of content that South Africans have at their fingertips is a comedy special from Trevor Noah.

While I may have made light of the South African market in the opening of this article, it certainly is worth nothing that Netflix, if they want to continue to grow, must continue to look for content that has international appeal.  In the end, it’s all about having content that appeals to a wide variety of demographics, and films like Catching Feelings can help mightily. 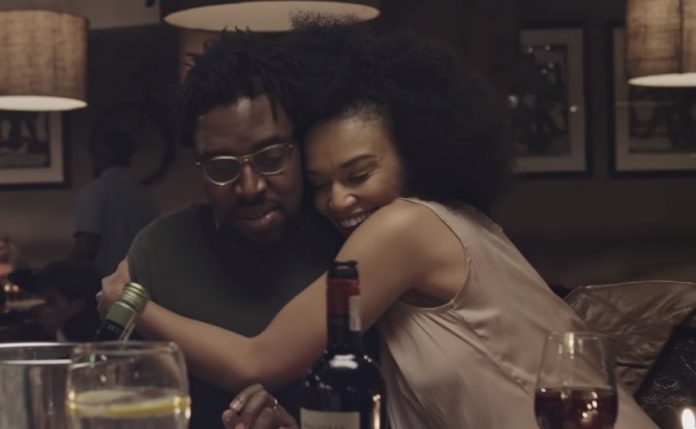 image via The South African

A common cliché in many reviews or commentaries of films is that the city is a character just as much as the star of the film, many of which are love letters to Los Angeles and New York (not coincidentally).

But in the case of Catching Feelings, Johannesburg truly is a part of the equation — both from a setting and cultural perspective.  Like most modern pieces of art that come from South Africa, there’s a strong sense of the lasting effects of apartheid in Catching Feelings.  But, it’s not the focus of the story.  Rather, it colors the picture in a different manner, putting a different spin on the romantic comedy.  The racial impacts of apartheid still have some bearing on social interactions and living situations in South Africa today, and Lediga does a wonderful job of infusing this ever-present sensation into the film, even if it does become overbearing at times.  It’s merely a part of life in the country.

Kagiso Lediga’s Work is Spotty All Around

Catching Feelings is first and foremost a passion project from Kagiso Lediga.  After all, he’s the writer, director, and lead actor of the film.

As I alluded to above regarding his use of Johannesburg and South African culture in the plot, there are moments where Lediga shows true promise as a creator.  But for the most part, Lediga struggles to stay consistent in all three phases (writing, directing, and acting), and it amounts to a frustrating viewing experience.

As an actor, Lediga has moments where he shows serious charm as an off-kilter lead, revelling in the awkwardness of his situation and his own inner monologue.  Some responses to other characters are golden with loads of snarky bite.  He rattles them off with great comedic timing that adds some much-needed character to the movie.  But then, Lediga will interact with characters like he forgot the dialogue that he wrote for himself, carrying himself with a nervous energy that is akin to someone who is frantically trying to think of words to improvise.  The timing and cadence is off, and dialogue that might have been funny or poignant in a vacuum falls flat.

In the director’s chair, Lediga shoots Catching Feelings without much personality following a rather clever opening animation sequence.  It’s competent, but there’s no life to the picture.  Colors never pop; scenes are rarely dynamic.  For a film that aspires to become a romantic comedy, Catching Feelings never gives off a magnetic impression.

There’s a repetitious nature to Catching Feelings in terms of scene construction and character interactions that is quickly tiresome.  You just keep wanting more out of Catching Feelings, but it never obliges.

You’ve seen the story that Catching Feelings tells before — a story of temptation and distrust isn’t new to cinema.  Familiarity isn’t an issue on its own (many have said over the years that there’s fundamentally very few stories to tell), but it’s what the filmmaker does with that setup that hooks the viewer.

With Catching Feelings, this familiar setup turns into an overly long story that overstays its welcome by the third act.  Realistically, there’s not much to this story, and yet it still lingers on.  It’s one thing if the additional, unnecessary beats are captivating, but they just aren’t in this case.

Ultimately, there’s just too much fat on Catching Feelings.  It works as a rough cut: it needs a few more passes by an editor to trim it down into a tight, cohesive story. 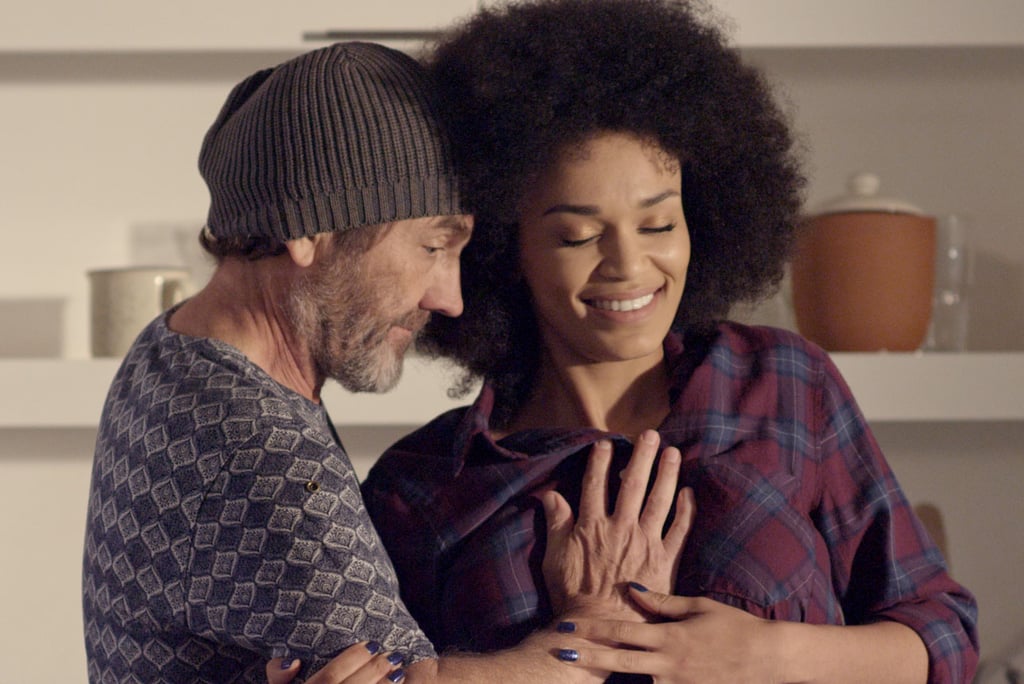 To say that Catching Feelings is without its merits would be a little excessive, but there’s no doubting that it is very, very flawed in the way it carries itself.  A strong sense of atmosphere and history is thwarted by a meandering plot that struggles to find its footing every step of the way.  When you want Catching Feelings to zig, it zags.  And when you want it to zag, it zigs way, way off course.

At the center of it all is Kagiso Lediga who appears to struggle to juggle every responsibility on his plate.  There’s definitely promise there for an extended future for him in the industry, but he needs to refine his skills for that future to remain available.

Thanks for reading! What are your thoughts on Catching Feelings? Comment down below!

Did they slept together or not?!

Insightful review and I agree with most of what you said— however, your grade is all wrong. You provide depth on the two main characters (ie city of Joburg and Lediga himself) but fail completely to mention the sparkling performances of Pearl Thusi, the author guy, and the best friend guy. These strong realistic performances are what carries the movie during what you describe as the zig and zags. I’d give this movie a B- without hesitation.

I was never as invested in those performances as you were. I thought they were suitable.
Nothing more, nothing less. I’m glad you enjoyed them (and the movie as a whole) though!

That’s unfortunate! They were basically two thirds of the story! Lol, well I suppose differences in opinions are allowed. Thanks for a great review.

Lol! Thanks for reading!

You gave words to what I was feeling, about Netflix’s strategy for increasing subscribers. With catching feelings, Cargo also released the same day. That I can say is quite good.

Cargo is great! It really is interesting to see where Netflix is trying to go, and no matter what they do, it’s always obvious lol