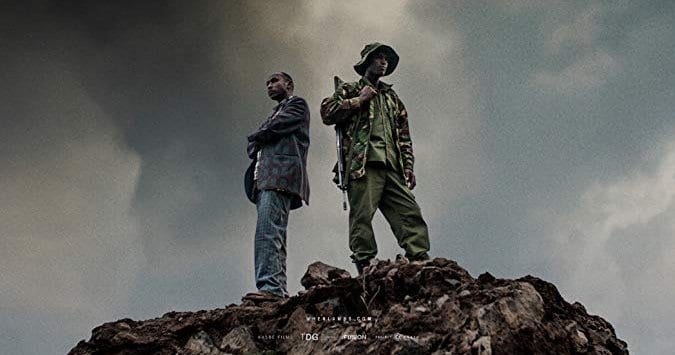 When Lambs Become Lions will be playing at the Denver Film Festival from October 31st to November 11th. Head over to the DFF’s website to purchase your tickets!

The MovieBabble staff was given the privilege of covering films that are set to premiere at the Denver Film Festival.  One of these films is When Lambs Become Lions, a breathtaking documentary focusing on the issue of poaching in Kenya.

Set in the bushlands of Kenya, When Lambs Become Lions follows the daily struggles of ivory dealer “X” and his trusted partner and elephant hunter Lukas. The two men boldly violate Kenya’s strict anti-poaching laws in order to try to make a decent living. Complicating matters even further is Asan, X’s cousin and a wildlife ranger whose job is to defend the bush from any and all poachers, even if one of them is his family. Tackling the Kenya’s poaching crisis from both sides, When Lambs Become Lions reveals the stark contrast between those who are upholders of the law and those who are forced to break it in order to survive.

Jon Kasbe is a director who is very familiar with the movie festival circuit. He has made numerous short films that have made the rounds at various festivals and have even earned him an Emmy nomination. When Lambs Become Lions is his first full-length documentary feature and has already premiered at several other festivals around the world. The film won the Tribeca and the Mountainfilm Film Festivals as well as being an official selection for the Zurich, San Diego, and New Orleans film festivals.

From the very beginning of the film, Kasbe showcases his filmmaking talent with a series of incredibly gorgeous establishing shots. However, this is only the beginning. Throughout the film there are numerous visually stunning and emotionally evocative shots. From slow pans of massive piles of burning, confiscated ivory to a close up of a horde of birds feeding on left behind scraps, each time the film presents a shot, the sheer beauty of it almost overwhelms the viewer. The film uses these shots in an incredibly effective manner, punctuating intense emotional scenes with the film’s subjects. Kasbe is a director who is in complete control of his visual storytelling. He seamlessly cuts back and forth between his film’s subjects and these beautiful shots. This creates an almost dream-like effect which draws one into the dark and complex world that is the everyday life of a poacher.

Another strong suit of When Lambs Become Lions is its unflinching realism. You as an audience member follow these men into the Kenyan bush on the hunt for elephants. You watch how they make the poison to take down these gigantic creatures. You feel the rush of terror as rangers begin to open fire on potential poachers. Almost nothing in the film is left to the imagination. It forcefully drags you into X’s world. You see his struggles and his triumphs. The audience watches as his son plays with a new bicycle bought with the proceeds of illegal ivory sales. The strongest point of When Lambs Become Lions is that it makes supposed evil seem relatable.

The worldwide community generally sees poaching as a deplorable act. Throughout the film there are callbacks to this fact. The message is preached from TV screens to public rallies. But despite the constant rhetoric about the evils of poaching, you cannot help but feel that what X is doing is right. The film makes these criminals feel incredibly relatable.That is not to say the that the film glorifies crime. In fact, it is quite the opposite. When Lambs Become Lions shows that in conflicts that are depicted as black and white, there is usually quite many shades of gray in between. While Kasbe’s visual storytelling creates a very powerful dreamlike effect, this can have some unintended results. For starters it makes the film feel a little disjointed at times with little to no cohesion between events. Granted, the documentary genre generally eschews traditional narrative structures. But this does not negate the fact that at several points it fells like the film is going nowhere narratively. It just seems content with jumping from random event to random event. As such without a laser tight focus, one might just end up becoming a little lost as the film progresses.

Overall, When Lambs Become Lions is a visually stunning documentary that delivers a powerful message. Its unflinching look into the lives of poachers challenges the ways that one looks at a conflict. It shines a new light on the struggle of those who live outside the law, and the lengths that some will go to survive. The film’s unique outlook more than makes up for its sometimes-meandering narrative, creating a documentary that is well worth seeing at the first opportunity.

Thank you for reading! What are your thoughts on When Lambs Become Lions? Comment down below!

Every Pixar Movie From Worst to Best