‘All the Beauty and the Bloodshed’: Nan Goldin’s Truth, Sacklers’ Lie

Laura Poitras's spectacular Golden Lion-winning documentary charts the legacy of photographer Nan Goldin, as defined by both the AIDS crisis and the opioid epidemic. 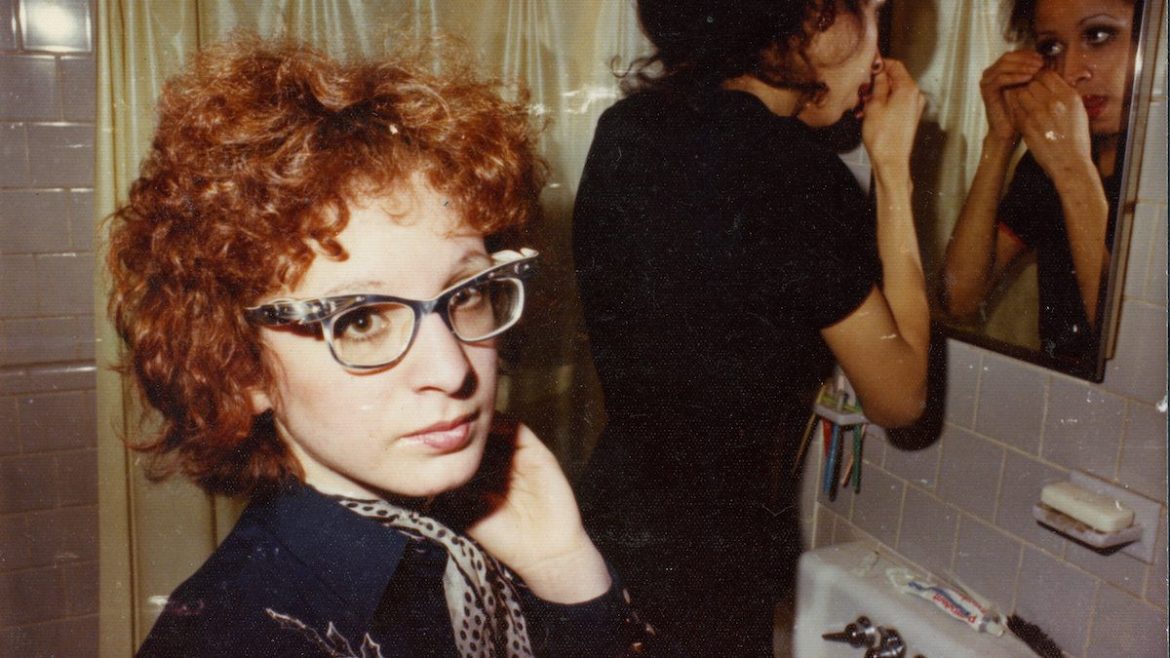 One of the first notable visuals in Laura Poitras’s landmark documentary, All the Beauty and the Bloodshed, is an excerpt slideshow from Nan Goldin’s legendary photography collection, “The Ballad of Sexual Dependency” — as good a time capsule as any for the agony and the ecstasy of the 1980s in post-punk America, as seen through the corners of the country that those in power would prefer to turn away from and ignore. These are photos that almost instantly stand out for their rugged aesthetic candor, uninterested in being selective about the details present in the frame; the result is a compelling series of over 700 photographs where, even for all of the freedom, beauty, and emotion expressed in so many of these images, there’s a looming sense of claustrophobia imbued within it all.

A photo of Cookie Mueller, underground film actress and frequent John Waters collaborator, getting married to her husband, Vittorio Scarpati, is followed later by a picture of her lying in an open casket, having died of AIDS in November of 1989. Another photo — an introspective scene of Goldin herself and her partner, Brian, in bed and awash in yellow sunlight shining into a shoddy apartment, the latter sitting up and smoking a cigarette shirtless — becomes quickly overshadowed by the knowledge from other photos that Goldin continually endured brutal physical abuse by Brian during their time together. And perhaps one of the collection’s most iconic photos, “The Hug,” which only shows a woman in a blue dress embracing her partner, their right arm wrapped around her being the only thing we see of them, is lit so starkly and simply, with so much strength and passion visible from these two people’s body language, that it gives the image a feeling of desperation — a feeling not unfamiliar to the downtrodden subcultures living under the Reagan administration’s repressive, actively malicious shadow during the AIDS crisis.

Give it some thought, and it becomes clear that Poitras was likely the only real choice for a documentarian to cover Goldin’s life and legacy. The deadly sins of the U.S. government have taken many permutations since the AIDS epidemic, and with them have emerged countless journalists and filmmakers dedicated to steadily unfurling them for the American people to witness. The release of Citizenfour (2014) immediately marked Poitras as one of the filmmakers at the forefront of such resistance, boldly tracing Edward Snowden’s whistleblowing against the NSA’s horrifically elaborate digital surveillance campaign on the American public — which is to say nothing about how she was also relentlessly monitored by the U.S. government for exposing the country’s occupation of Iraq for her film, My Country, My Country (2006). With her streak of probing at and flaying open the intrinsically corrupt systems that get America’s wheels turning, no filmmaker seemed better equipped to tell Goldin’s story, while simultaneously making a potent statement on the history she’s both paid witness to and is fighting to keep from repeating all over again.

The end result of that collaboration is All the Beauty and the Bloodshed, a towering achievement in modern documentary filmmaking that most immediately stands out as a masterful balancing act. As the film navigates Goldin’s upbringing, her life in the post-punk and queer communities of the time, as well as her rise in the art scene as a noteworthy photographer, it also offsets that with footage of her continued fight against the reviled Sackler family’s influence in the art world, having founded the protest organization P.A.I.N. (Prescription Addiction Intervention Now) in late 2017 after experiencing a near-fatal opioid overdose and witnessing the Sacklers go unpunished for their deliberate role in the deaths of hundreds of thousands at the hands of addiction to OxyContin. As a profile of an artist, the film is simply excellent — as a reflection of the worlds she exists in, it is nothing short of absolute perfection.

For the ten lifetimes’ worth of experience Goldin has already been through, it’s remarkable just how much Poitras manages to condense her life story into a two-hour film while still covering a significant amount of ground in the process. The film’s depictions of Goldin’s early life are a slyly clever and thematically perfect subversion of the typical talking-head-interview format so many documentaries of its kind have resorted to — it leaves Goldin’s descriptions of her upbringing in voiceover, as the film treats us to literal slideshows of photographs from Goldin herself and other sources, depicting the people in her life and the situations she experienced. The first story of note from Goldin is that of her older sister, Barbara; a rebellious young woman who was firmly aware of the repressive silence of suburbia, as well as the complexities of sexuality, yet died by suicide at the age of 18, forever reshaping Goldin’s family and setting her on a path to use a camera as a means of holding onto the people in her life.

As Goldin recounts more of her experiences in the country’s various subcultures, there’s a haunting power that emerges from these photos, not just because of the people in them, but because of the specificity and lifelike details of the world that Goldin remembers, supported by the images from her and Poitras’s slideshows, and her own personal photos. Artistic figures like David Wojnarowicz, Vivienne Dick, the aforementioned Cookie Mueller, Bette Gordon, Greer Lankton, and so on all make appearances, many of whom, as Goldin states later in the film, unfortunately died of AIDS or were severely impacted by the epidemic — a series of incalculable losses to our current generation, and which heightened an already incomparable fear and dread to those that were subject to its ravaging of communities. We’re treated to vignettes from Goldin detailing how they used their art to resist the government’s repressive influence at the time: most noteworthy of them is the exhibition titled “Witnesses: Against Our Vanishing,” which Goldin organized at the Artists Space in New York in late 1989, allowing the queer community to make their artistic mark in a world slowly pushing them into the forgotten annals of history.

The film is split into seven chapters, each of which starts with these slideshows recounting Goldin’s life, before transitioning to directly shot, on-the-scene footage of Goldin’s activism with members of P.A.I.N. as they make their way through museums worldwide and fight for them to reject the Sacklers’ money and remove their names from their halls. In every aspect of the country’s reckoning about the Sacklers and their role in the opioid crisis, P.A.I.N. is always there — always protesting at the center of museum exhibitions, and always doing what they can to make their intentions clear to the legal entities related to their financial manipulations. Accountability and harm reduction are their main goals (they say as much themselves during protests), but it’s intensely stirring to watch Goldin and her team orchestrate the best strategies for protests before landing the nail on the head in the moment by being as upfront about their message and coordinated in their every movement as possible. It’s also difficult to understate just how much of a personal fight this is for Goldin — having witnessed the corruption of American institutions lead to the needless deaths of hundreds of thousands, and having nearly died of an opioid-related drug overdose herself, it’s hard not to see echoes of the AIDS epidemic’s catastrophic failures in those of the opioid epidemic, and it makes every instance Poitras captures of her activism that much more potent as she fights not to let many of those mistakes repeat again in history, especially not when we see so much of the societal workings that brought Goldin to this point.

Above all else, Goldin is a witness to historical pain, something that her photography both carefully observes and flagrantly defies at every turn. Her work is all part of an attempt to contend with and discover the humanity buried under the harsh political failures of the 80s, especially when it comes to the destitute conditions and deliberately imposed neglect that queer people and societal outcasts in America at the time were forced to endure by an actively antipathetic, staunchly conservative government. The AIDS crisis stands out for being such an exceptional example of how ready and willing the U.S. government can be to completely desert the people it deems “undesirable” when given the chance for political benefit — an era of uninhibited queerphobia, exploitation, and stigmatization, matched with hundreds of thousands of needless deaths robbing us of an entire generation of queer creatives, lovers, and families, which Reagan and those continuing his blood-stained legacy did not, and presumably will not ever, answer for. For an era of such monumental loss, all-consuming societal dread, and solidarity found through collective grief, Goldin’s photography transcends yet another form of artistic expression and becomes a vital historical necessity — it becomes an act of preservation.

But preservation simply isn’t enough, especially when the fight to keep people alive at the hands of corrupt systemic forces still persists, just under different names, circumstances, victims, and plagues. Indeed, shades of the political and societal negligence in the ’80s that allowed for such terrifying, widespread death linger in the OxyContin crisis as well — a singular wealthy family whose blood-drenched fortune has bought them freedom from legal consequence, and who continue to profit off of death and suffering without any consideration to the human cost it inflicts on our societies. And Goldin, more than anyone else, is keenly aware of this; she knows we cannot wait for hundreds of thousands more to die before those of such morally vile wealth and power are made to face the consequences, and the institutions protecting the Sacklers begin to hold them accountable not just for their deliberate exploitation of capitalism’s most sadistic impulses, but also for how they’ve callously evaded justice for as long as they have. With Poitras carefully crafting this all-encompassing portrait of Goldin’s life, we understand why she holds such a deeply venerable position in the art world; because her art, and by extension, her preservation of those who came before us, makes the personal inextricable from the political, and gives us a reason to fight for our lives against epochal, corrupt institutions that have plenty to gain from letting them be extinguished.

Thank you for reading! What are your thoughts on All the Beauty and the Bloodshed? Comment down below!

[…] Kush: After recently watching Laura Poitras’ fantastic All the Beauty and the Bloodshed, I’ve reflected a bit on how vital works of activist art are to us. Unquestionably, all art […]