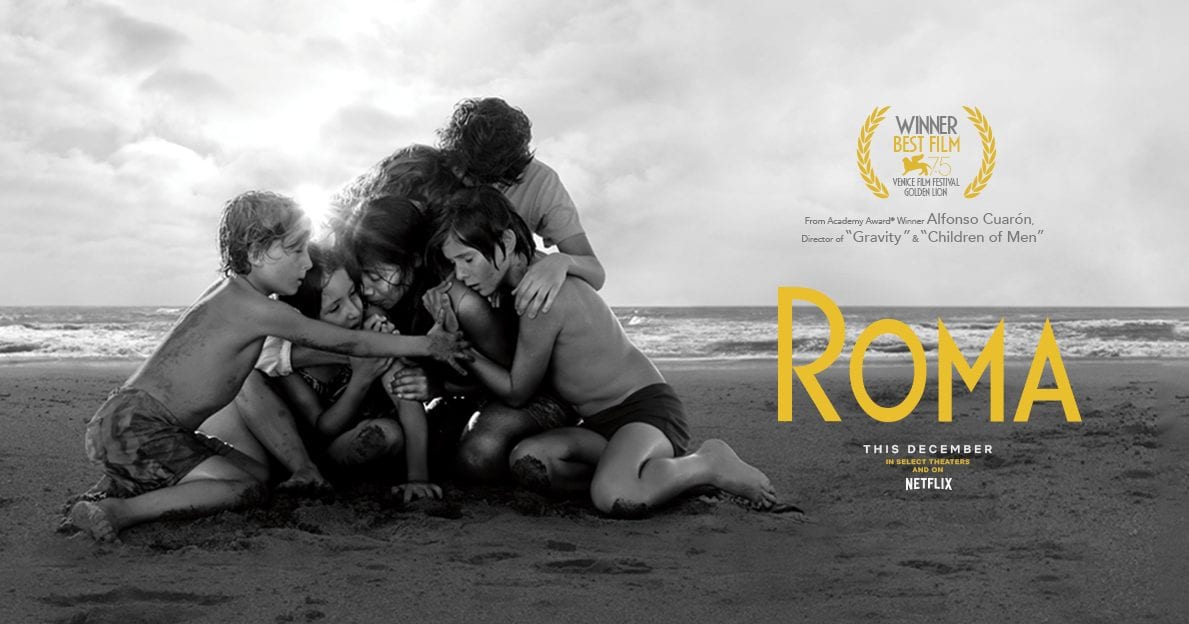 Back in 2013, both Steve McQueen and Alfonso Cuarón made two incredible films, competing against each other at the Academy Awards. McQueen’s 12 Years A Slave was an incredibly moving period piece about the greatest injustice in U.S. history. While Cuarón’s Gravity was a technically innovative, high-concept, science fiction survival film, best witnessed on an IMAX screen.

Fast forward five years to 2018, it’s no surprise these filmmaking titans have competing awards contenders once again. Only this time, McQueen has made the high concept, genre film in Widows and Cuarón has made the incredibly moving, semi-autobiographical period piece, Roma.

Mexico City, Early 1970s. Roma chronicles a year in the life of a middle-class family through the perspective of their housemaid, Cleo (Aparicio).

Alfonso Cuarón says ‘Adios’ to Hollywood for now and returns to Mexico for his first Spanish language film since Y Tu Mamá También back in 2001. Roma is a film that Cuarón has wanted to make ever since he finished Children of Men. According to Cuarón, 90% of the scenes represented in the film are drawn from memories of his childhood and the film is dedicated to the matriarchal figures who helped raise him. The Cuarón family servant in particular, Libo, who the character of Cleo is based on.

Roma has an incredible amount of buzz surrounding it. Not only is it Cuarón’s well overdue return to Mexican cinema and his long-awaited follow-up to Gravity, but Roma has dominated the festival circuit, taking home the Golden Lion for Best Film at the Venice Film Festival back in September. It is also Mexico’s official entry for Best Foreign Language Feature at the Academy Awards and could very well be the first major awards season contender and Best Picture nominee for streaming colossus, Netflix. 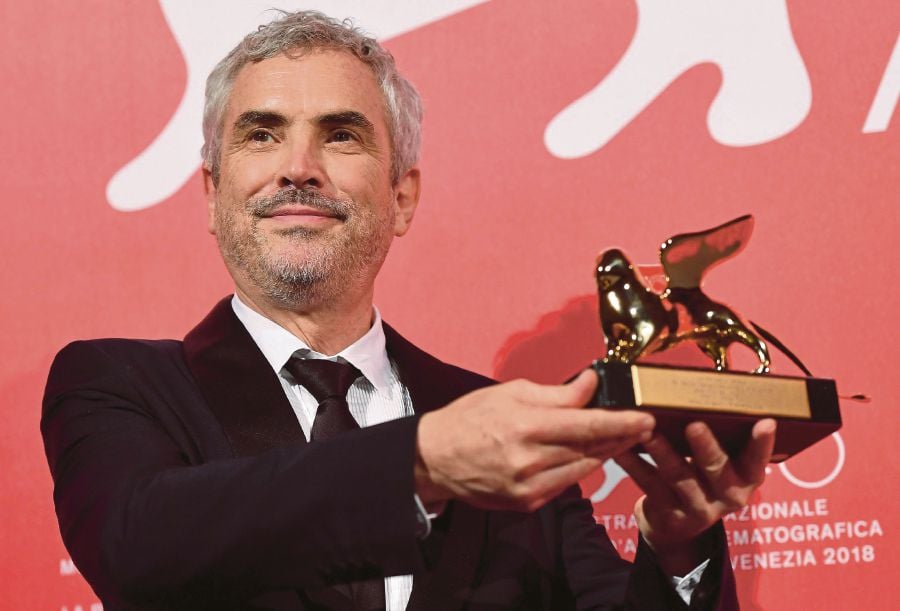 I’ve had the pleasure and the privilege to witness Roma in all its monochromatic glory on the big screen. Twice. And after seeing it two times in the span of five days, it’s incredibly apparent that Roma is a film that demands to be seen in a theater.

Right from the very first shot, this film puts you right under its spell. Roma opens with a beautifully minimalist and meditative credits sequence. A face-down static shot of marble tiles with soapy water pulling in and out of frame, like waves crashing on a shore, reflecting the sky above was simplistic yet utterly breathtaking.

Despite the absence of long-time collaborator and three-time Oscar winner, Emmanuel Lubezki, The cinematography all around from Cuarón himself is absolutely gorgeous. His signature long takes and slow, smooth panning wide shots throughout reels you into the world of these characters and into his own past. You could take any shot from this film, frame it and put it in a gallery. It is that good.

Couple this exquisite cinematography with the fantastic Atmos sound mix and the audience are enveloped into these character’s lives. The sound design uses surround sound systems to their fullest effect. This is one of the many reasons Roma needs to be seen in a cinema. Even if you have a decent home sound system or a really good pair of stereo headphones, it just won’t be the same. You will not get the full effect.

There are only a handful of professional actors in the film, so for a majority of the cast, Roma is their first and only acting credit. Using non-professional actors in a high-profile film like this (especially in lead roles) can always be a gamble. But under the flawless direction of Cuarón, he is able to bring the best in these people’s limited acting abilities.

The entire cast gives very raw, honest and truly captivating performances. There is no overly dramatic, scenery chewing, exaggerated emotions from anyone. Every single performance is pitch perfect to the tone and feeling of the film. This use of non-professional actors evokes a real sense of sincerity and realism and a feeling that the characters on screen are indeed, real people.

However, you cannot discuss the performances in this film without mentioning schoolteacher turned actress, Yalitza Aparicio as Cleo. She is a revelation. It is a role that asks a lot of her both physically and emotionally and there isn’t a scene that she’s not in.

That’s a lot to put on a woman who has never acted before, but Aparicio is nothing short of excellent.

It was a smart choice casting someone who works with children to play Cleo, as Aparicio has incredible chemistry with the child actors in the film. Their interactions and the care and love she shows these kids and the rest of the family are genuinely heartfelt and filled with rich, palpable emotion. I would not be surprised if she receives a best actress nomination. She wholeheartedly deserves it. A Masterclass of Subtlety

Roma is an ambitious film in terms of its scope. The film covers themes of class, family separation and political unrest, just to name a few. These themes are addressed in many scenes, but the focus never shifts from the characters. They integrated perfectly into the story, resulting in very subtle, yet impactful execution and exploration of these ideas.

Roma makes these very subtle, profound statements about these themes without ever calling attention to itself or patting itself on the back for doing so. I was so relieved the film did not fall into that trap, unlike a few of films I have seen in 2018 (I’m looking at you, BlacKkKlansman).

For example, there is a scene where Cleo is in a department store during the events of the Corpus Christi Massacre, where a number of student protesters were murdered by paramilitary forces. The film presents an incredibly harrowing depiction of the tragic event, but again the focus stays with Cleo and her experience with the horror of the massacre. An interaction she has in this sequence with another character made the event all the more personal, nightmarish and incredibly effective.

Roma is completely free of overblown theatrics, Hollywood contrivances and overbearing melodrama. It is a beautiful portrait of a bourgeois, middle class family through the very grounded and humble eyes of their lower class housemaid. This gives a perspective that is rarely shown on screen and if they are all as poignant as Roma, it is one we need to see much more of. 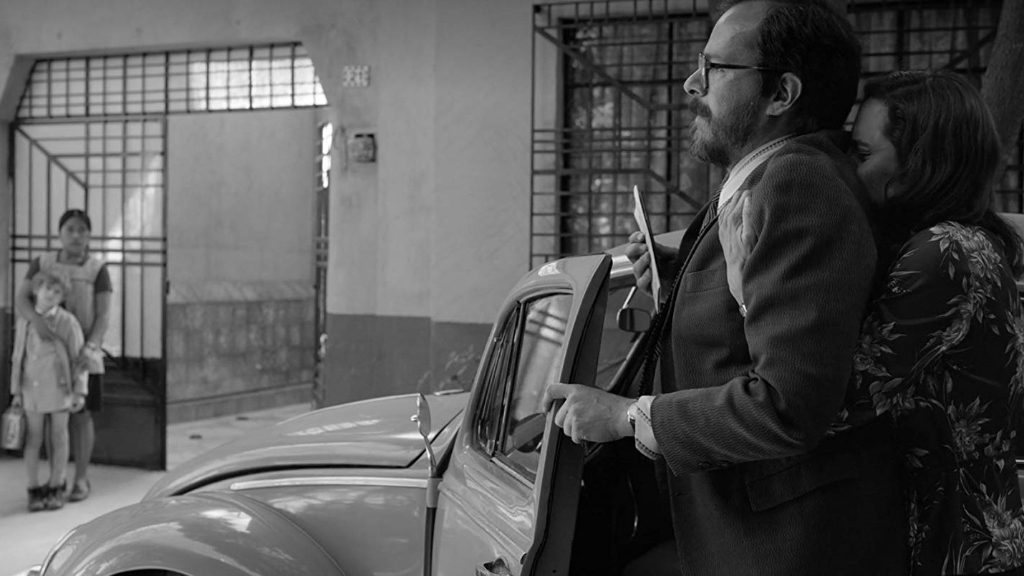 Image via The Upcoming

There is still a month left and a slew of films still to come in 2018, but Roma has set the benchmark. This is the best film of 2018 and I highly doubt that anything will top Cuarón’s magnum opus. He has put his heart, soul, blood, sweat and tears into this passion project and it is present in every single beautiful frame.

It’s an excellent slice of life of a family you can’t help but fall in love with and ride every wave of compassion and heartbreak with them. There is so much genuine, raw, tangible emotion that makes Roma such a brilliant sensory and emotional experience, that it just has to be seen in theaters. So much of this film will be lost watching it on Tablet, a Laptop or even a TV. Therefore, I implore you to find a screening and witness this film the way it was meant to be seen.

I usually hesitate to use this word, as it’s thrown around so often these days, but there really is no other way to describe this film. Roma is a masterpiece.

Roma is available internationally on Netflix from December 14. For Australian readers, Roma is currently playing as part of the Cine Latino Film Festival. Head to cinelatinofilmfestival.com.au for session info and tickets.

Thanks for reading! What are your thoughts on Roma? Comment down below!

[…] Louly: Yes!!! After Green Book somehow claiming the top spot last year over films like Roma and BlacKkKlansman, justice needed to be served. I am so excited that Korean films are finally […]

[…] to be exact — continues the unprecedented success for international films at the Oscars that Roma spearheaded last year. And while it may not come away with that coveted Best Picture win, it is […]