35 years after the release of Ridley Scott‘s highly influential Blade Runner, its sequel, Blade Runner 2049, has finally arrived in theaters.  With major talent such as Denis Villeneuve and Ryan Gosling added to the mix both behind and in front of the camera, many pointed to this film as their most anticipated film of the fall season.  The following review will be spoiler free. 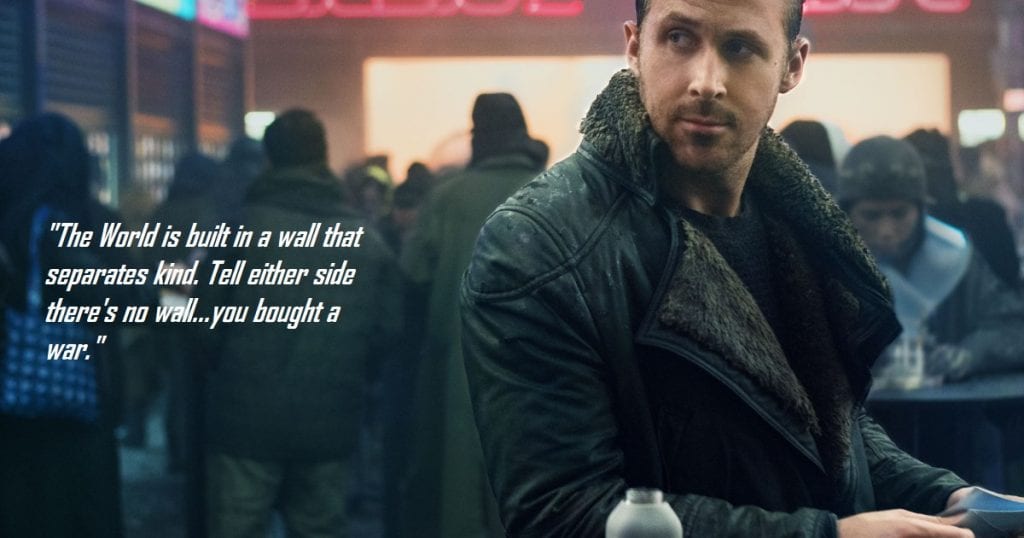 Blade Runner 2049 is directed by Denis Villeneuve and stars newcomers Ryan Gosling, Jared Leto, and Ana de Armas with Harrison Ford returning to the property to reprise his role of Rick Deckard.

30 years after the events of the first Blade Runner, Officer K (Gosling) discovers a long-kept secret that could lead to an all-out war if discovered by the rest of society.  This secret causes him to seek out former blade runner Rick Deckard, who has been missing for the last 30 years.

As with seemingly every other high profile film these days, there were plans to make a sequel to Blade Runner long before 2017.  Talks actually began in 1999 when British filmmaker Stuart Hazeldine wrote a script titled Blade Runner Down.  However, rights issues for Blade Runner were up in the air, making a sequel at the time very implausible.

Later on, Ridley Scott flirted with making a sequel in 2007, tentatively calling it Metropolis which would obviously be a tip of the cap to the 1927 classic film.  But, his interest later turned to television and streaming in 2009 when he teamed up with his brother, Tony Scott, to create Blade Runner shorts that were prequel iterations to the 1982 original.  Unfortunately, rights issues made it impossible for the series to tie in closely to the original film which made the plan quickly fall apart due to a lack of funding.

Thankfully, talks of a true sequel finally picked up in 2013 with Harrison Ford confirmed to return as Rick Deckard in 2015.  Denis Villeneuve also signed on around the same time, later claiming that he joined the project so that “no one else would f*** it up.”

Roger Deakins, the director of cinematography on the film, has been nominated for an Oscar on thirteen seperate occasions.  But, he has never won.  If he doesn’t get his first victory for Blade Runner 2049, then I might just blow a gasket.

Every frame of Blade Runner 2049 is utter perfection.  Practical effects reign supreme in the film, providing rich, true atmospheres that feel lived-in, dirty, and bleak.  This phrase gets thrown around a lot, but you haven’t anything quite like this.  Even the simplest of shots are absolutely stunning in every imaginable way.

Just look at this:

How is that even possible?

Although it may seem like it, there’s no hyperbole in this discussion whatsoever.  The blend between practical and CGI effects is so seamless that you’ll find your mouth open in astonishment the majority of the film’s run time.

For those that want a fast-paced, sci-fi adventure, you won’t find that here.  Use your Blu-Ray of Guardians of the Galaxy if you want that type of entertainment.  Blade Runner 2049 is a deep exploration of themes that takes its time to flesh out every single character that’s pertinent to the plot.  There are fleeting moments of action within this deep story.  However, the film’s main focus quickly diverts to other, more lofty, issues.

Blade Runner 2049 is the definition of a film.  This is NOT a movie, but rather a piece of art that you need to dissect. But hell, you probably knew that already if you’ve ever seen or merely heard of the original Blade Runner.  This sequel isn’t for everyone, but it will absolutely entertain those who are willing to handle its structure.

For your troubles, you’ll see an unbelievable performance from Ryan Gosling in the lead role.  Mirroring the feel of the movie, everything about him is very understated.  Great writing and scene structure allow him to speak vividly just with his eyes.  It makes it that much better when he shows emotion.

A Storyline that Distorts the Idea of Humanity Even Further

It’s very difficult to discuss Blade Runner 2049 without dipping into spoiler territory.  It’s plot details are heavily rooted in a spoiler element that propels the film.  However, what can be said is that its themes are very, very present.  Blade Runner 2049 never insists upon itself, but the questions it poses are discussed with the most expert percision.  You won’t find all the answers to the questions it asks.  But then again, a movie like Blade Runner 2049 should never contain the end-all be-all answer to its core concepts.

The line between human and replicant has been blurred to an almost unquantifiable amount.  Where the original may have faltered in creating a streamlined narrative that is both captivating and insightful, 2049 succeeded mightily.  It’s one thing to praise the visuals and the scope of the world.  Still, it’s the weaving together of amazing, intellectual discussion with a great narrative that separates this film from something like Valerian and the City of a Thousands Planets.

Blade Runner 2049 is an amazing triumphant in filmmaking.  If he hadn’t done it already, Denis Villeneuve proved that he’s one of the best, if not the best, directors working in Hollywood today.  His careful, understated direction provides for amazing sequences that are filled with existential questions and visual flair, all the while providing a narrative that incredibly satisfying and clever.  It gets an A+.

Go support this film by seeing it in the theaters as its success will undoubtedly usher in a wave of high-budget, thought-provoking films for us all to enjoy.

This may be somewhat of a hot take, but 2049 might be better than the original (Internet, don’t hate me).

Thanks for reading!  What are your thoughts on Blade Runner 2049?  Comment down below!

[…] that, but it does lean that way. With a little more focus on plot, it could be a companion piece to Blade Runner 2049, albeit one where Ryan Gosling spends a lot more time staring at the sea and a lot less time […]

[…] of Jesse James by the Coward Robert Ford and the sharp, critical lighting and color of Blade Runner 2049. I think 1917 is certainly up there, tied with those two films. His work is flooring and […]

Good point on the length and pacing. This was definitely a long movie, and it definitely felt like a long movie, but it never bored me–although I did have to take a heck of a sprint to the bathroom when the credits started rolling.

Same here lol I wasn’t about to miss a second of it!

I saw Blade Runner last night and it was stunning! Brilliant! I am disappointed that the box office is not as good as hoped for as this film really deserves to be seen. The cinematography, set design, direction, sound fx, and the acting were all superb. ,

In the coming years, it’ll probably go down as a masterpiece. It’s too bad no one is seeing it! It might be the best movie of the year!

thanks for this review. I can NOT WAIT to see this film.

Enjoy yourself! Just know that it’s a very long, ponderous film. When you accept that fact, you’ll probably unabashedly love it!

My husband and I both used to work in the film industry and if the production values are high and the film ( acting, cinematography, story etc) are good then we will love the fact that it is long and ponderous!

Then I foresee that you’ll love this film!

I’m going to have to wait another week for this one, but I know it will be worth the wait. Really, really looking forward to this one ? Terrific review….and with an A+, I could not get any more excited for this than I already am ?

It’s pretty amazing. Sometimes I couldn’t believe what I was watching

Great review (as always). Hoping to catch it tomorrow!

2049 is not perfect but neither is the original (although it is my favourite movie). It is a great, adult serious sci fi film (albeit as serious as Hollywood sci fi gets). The film suffers from pacing and a generic soundtrack, but it’s still a brilliant film and deserves box office success. Maybe awards too, you never know.

I would say that the original has more of a pacing issue than 2049. As much as I want to love the original, I’ve just never been able to get into it with its unbelievably slow pace

Ok, I was already hyperventilating about this sequel to one of my most favourite films of all time, and all you’ve done is sent me running for a brown paper bag!!
I don’t think there is any other sequence in any other film I remember quite as vividly as that last scene with Deckard and the nexus 6: “I have seen thinks you people wouldn’t believe …”
If this sequel is anything remotely as good as the first one I might just implode as I sit in the cinema tonight and watch BladeRunner 2049.
I am so f*****excited!!

This review is coming from a person that isn’t even that big of a fan of the original which shows how good this one is!

Thanks for the review! I really wanted to see it anyway but now I feel I must ;)

You absolutely must! It’s one of those films that is like an event!