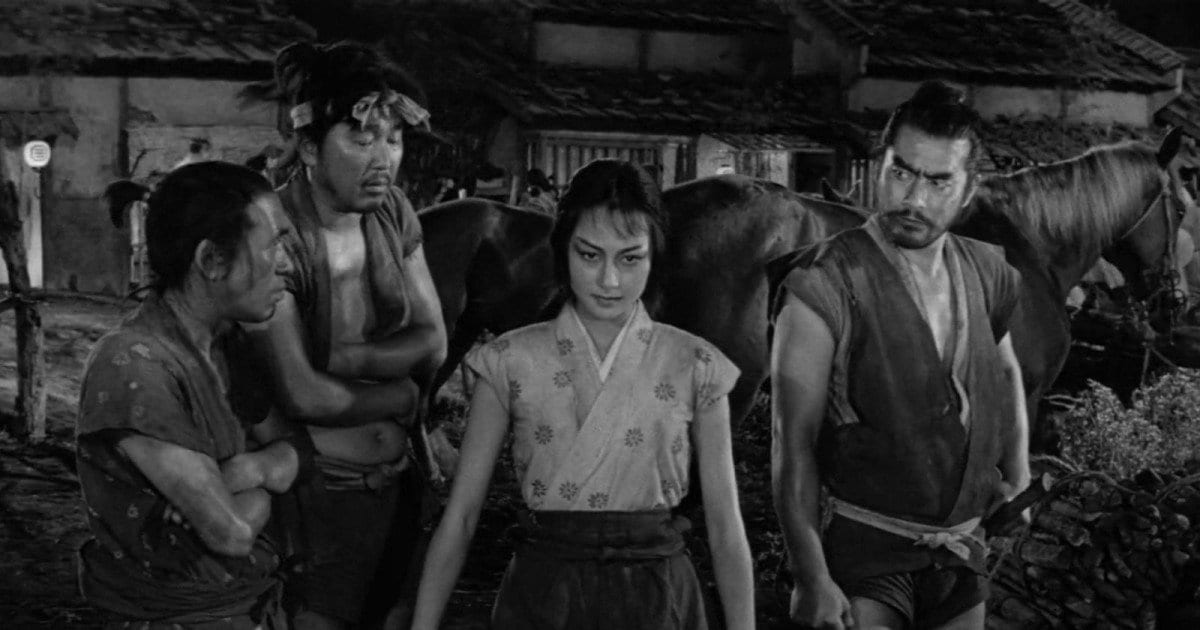 It might be sixty years old, but The Hidden Fortress is fun, comedy, and adventure rolled up in an epic package. It is just as good today as when it was first made.

A Japanese drama set in feudal Japan, two peasants are caught up in a war between two clans. The losing side has a great deal of gold hidden away, and the victors are searching for the gold as well as the last survivor of the losing clan, Princess Yuki. The peasants are more interested in the gold than anything else, allowing the girl’s protector to manipulate them into helping.

We see this story from the point of view of two characters who contribute very little to the actual unfolding of events. Tahei (Minoru Chiaki) and Matakishi (Kamatari Fujiwara) are the peasants who observe the events and get caught up in the affairs of nobility. The princess (Misa Uehara) and General Rokurota Makabe (Toshiru Mifune) are the main characters in terms of the plot. Makabe lures Tahei and Matakishi by promising gold as a reward. The two are quite happy to turn on the others if it suits them. Their concern is solely with making money.

This isn’t as unpleasant as it might appear. Peasants of that time and place had a very tough life, and they had nothing to expect from the aristocracy but brutality and death. Tahei and Matakishi had already experienced imprisonment at the start of the film by being in the wrong place at the wrong time. Their attitude is not so hard to understand in this context. They are unable to affect their own lives or the circumstances and are helpless pawns and victims. They see gold as a means to be free and in charge of their own fate.

These two characters are also the main source of comedy in The Hidden Fortress. They constantly snipe at each other and moan about their situation. Neither character is particularly intelligent, and make many stupid decisions (such as scraping about for more gold when they are already struggling with what they are carrying). They can’t even keep faith with each other consistently; they will swear undying friendship one moment, and fight over gold the next. This ultimately leads to their capture, and soon they are snivelling in a jail cell and swearing friendship again. The scene where they are getting all hot and bothered over the sleeping princess, only to be held at bay by the peasant girl wielding a rock, is particularly funny.

Akira Kurosawa is one of my favorite directors. He made many historical dramas during his career, a while this film is more light-hearted than many, he still brings the same attention to detail and epic scope. His action sequences are superb. The uprising of the prisoners and the fight on the steps is beautifully shot. Kurosawa often resists close-ups during battle scenes, in favor of wide shots which gives the audience a better idea of the context of the action.

How to Shoot Action

Kurosawa directs smaller scale action with the same care and expertise. Makabe rides after two escaping soldiers, and tries to stop them before they report on the princess. This sword fight takes place on horseback at full gallop, and it’s brilliant. It’s also a great piece of stunt work — the rider has both hands on his sword and is controlling the horse with his legs.

It proceeds smoothly into the duel, where Makabe fights his friend Hyoe Tadokoro (Susumu Fujita) in order to escape from the soldiers’ camp.  This is another brilliantly directed scene, and Kurosawa gives multiple shots from different angles to further illustrate the full scope of the action. The choreography is excellent, and the actors are convincing.

image via Can’t Stop the Movies

Kurosawa is known for making good use of weather in his films, though it is less prevalent in The Hidden Fortress than in some other films. Still, in one scene the peasant girl (Toshiko Higuchi) is walking in the rain and discovers that it is the princess of her own ruling clan who has rescued her. As she walks, she reflects that this important person bothered to rescue her from slavery when she is just a peasant (an alternative viewpoint to that of Tahei and Matakishi). The heavy downpour seems to reflect her pondering. Kurosawa makes use of weather in films to echo the emotions of the characters. She holds off the two men with a rock immediately after this, which tells us exactly how she feels about the information and where her loyalties lie.

This film also has one of my favorite actors, the awesome Toshiro Mifune. This actor had incredible screen presence, and you can see in this film how he commands every scene, often without uttering a word. When one of the other characters, completely oblivious, reveals that Makabe’s sister is dead, Mifune’s reaction is brilliant. The audience can see immediately how distressed he is by this news, though he says nothing. When he reveals to the princess that it is his own sister who has died, she berates him and says he is responsible. He accepts this silently. You never doubt that he is anything other than gutted, without him saying a word or shedding a tear. 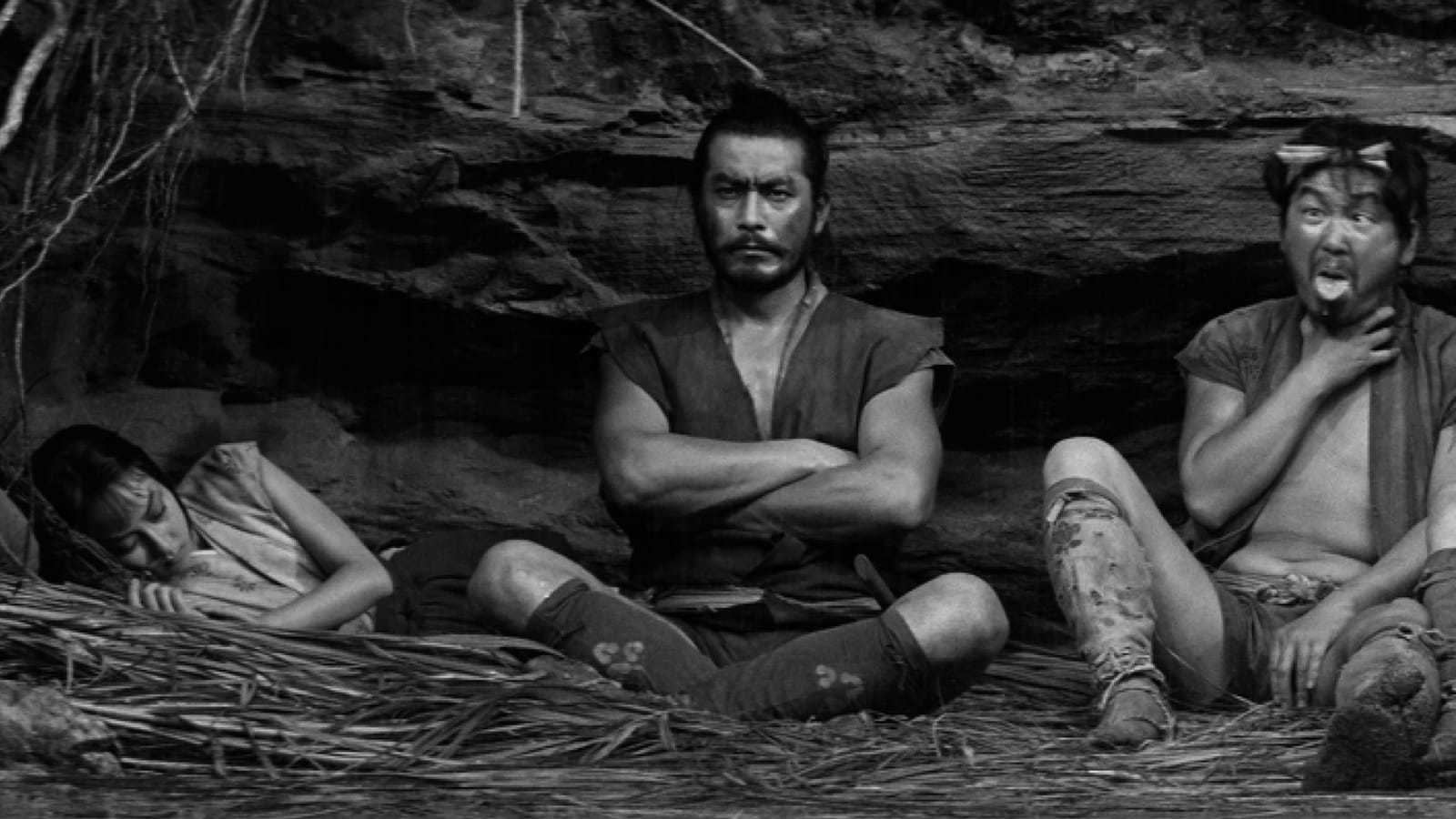 Chiaki and Fujimara, as the peasants, are great fun to watch in their irritating foolishness and do a fine job as comic relief. Uehara as the princess plays a less passive role than might be expected. She does a great job depicting a young girl struggling to be grown up and do her duty. All the supporting actors are excellent and enjoyable to watch.

The Hidden Fortress is often regarded as one of Kurosawa’s lesser works, however I think it’s as fine as any of his other films. He was a truly gifted director, and this is a truly entertaining film.

Thank you for reading! What are you thoughts on The Hidden Fortress? Comment down below!

[…] Trilogy, where the legendary warrior was portrayed by the equally legendary Japanese film icon, Toshiro Mifune. Rather than chronicle the full storied history of this fabled ronin once again, fight […]

[…] cited as the inspiration for Star Wars, Akira Kurosawa’s adventure epic about two bumbling thieves stumbling upon a lost princess was recommended by not one, but two […]

Good review but you left out the importance of this film to the Star War pantheon. Lucas acknowledged that the two peasants were the founding inspiration for R2D2 and CP30. The Princess here has Leila overtones and undertones. These are the most obvious you can see a glimmer of Han Solo in the Mifune role. Sure there in no Skywalker source or Vader origin character, but the plot does have Stron Star Wars parallels.

Hello, thanks for your comment. Re the Star Wars thing – I considered mentioning it, but to be honest the connection always seemed a bit tenuous to me.