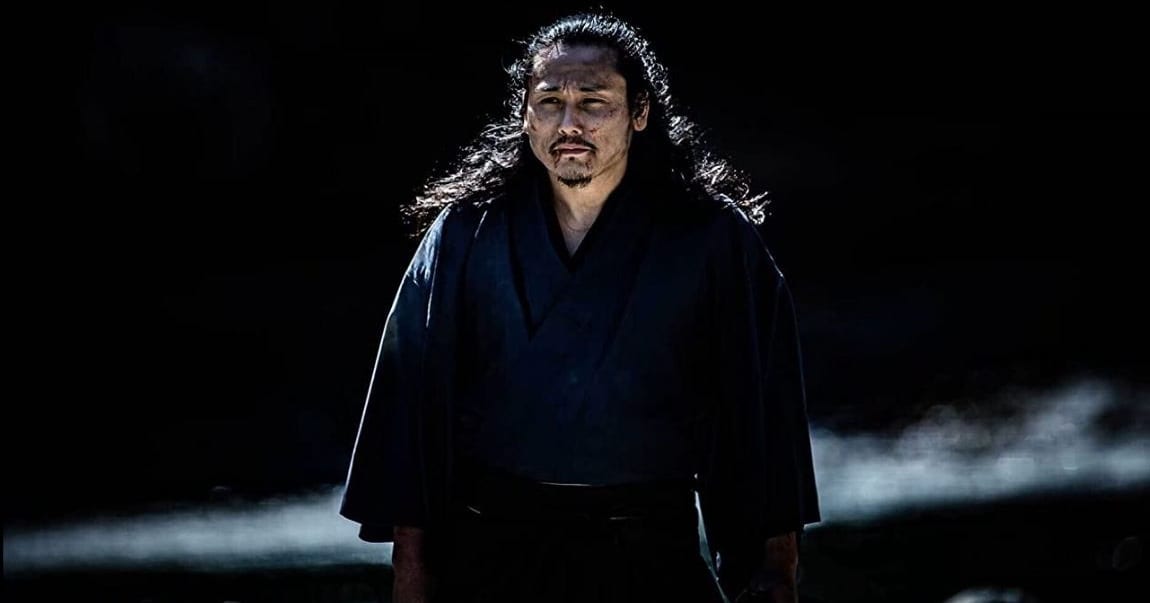 A renowned philosopher and swordsman of the early Edo period, the life of Miyamoto Musashi has been told onscreen countless times since the late 1920s. Most notably in Hiroshi Inagaki’s Samurai Trilogy, where the legendary warrior was portrayed by the equally legendary Japanese film icon, Toshiro Mifune. Rather than chronicle the full storied history of this fabled ronin once again, fight choreographer turned director, Yuji Shimomura opts to focus on perhaps Musashi’s greatest battle; single-handedly confronting a 588-strong clan of warriors, all bloodthirsty for vengeance.

And what better way to present this epic showdown than with a single, uninterrupted 77-minute-long single take where Musashi one-by-one hacks and slashes his way to victory. A clever and novel idea, but even with the talents of Sion Sono’s writing, Shimomura’s expertise in stuntwork and the remarkable physicality of action star Tak Sakaguchi front and center, Crazy Samurai Musashi offers little mileage out of its overly-ambitious intent.

From the outset, it’s evident the filmmakers are struggling not just with the limitations of the one-shot concept, but also in making it exciting or visually compelling. The first third of the single take is in daylight and they try really hard to keep this constantly moving camera facing away from the sun. However, the downside is that Musashi is facing away from the camera for a significant time in the opening fight sequence, obscuring the emotion, intricacies, and skill of his strength and swordsmanship. It also restricts the impact of every killer blow Musashi inflicts and makes all of his attacks and counter-attacks look exactly the same, which over the course of a long single take with very little shot variation grows tiresomely repetitive. The wave after wave onslaught of cannon fodder for Musashi to cut down paired with this awkward way of shooting heavily elicits the structure and looks of a video game, even to the point where Musashi fights more distinct and skilled opponents that present themselves like a mini-boss at the end of a level.

When the film opts for smaller-scale battles with fewer opponents in confined spaces, it becomes much more exciting and kinetic, yet they are too few and far between. An epilogue sequence that was shot and edited in a more traditional action sense was the most riveting and fun fight in the film. So much so, it makes you wonder why the rest of the film was not done this way.  Thankfully, the film gets better as Musashi grows more battle-weary in his one-man war with the Crazy 588. As the sun starts to set, the camera is able to move around more freely and becomes much more fluid and natural. The location also shifts from a forest to a small village and Musashi can better use this environment around him to best his opponents.

Sakaguchi really brings the stoic bravery and intense physicality to Musashi. It goes without saying that he’s great in the many fight sequences, but is also having fun in the brief moments of downtime. In the fleeting moments where he can take a breather and rehydrate via a series of carefully placed water receptacles, his exhaustion is tangible but is able to effortlessly shake it off and keep going. The score by Hidehiro Kawaii also picks up momentum quickly after a sluggish start. A lot of the emotional drive in Crazy Samurai Musashi is heavily reliant on the score. It begins with a dull, monotonous pounding of drums that escalates as the intensity of the battle rises to even making a dramatic shift into a soft somber piano as the fight begins to take its toll on Musashi.

Though commendably audacious in its scale and scope and eventually winning me over with a strong finale, Crazy Samurai Musashi is ultimately a disappointment. While there is some genuinely incredible fight choreography and an interesting attempt at this bold one-shot concept on what looks to be a fairly low budget, Shimomura sadly cannot quite pull it off. There’s certainly a lot of fun to be had, but that enjoyment is spread so thin over the highly repetitive action of the 77-minute single take, the film itself becomes much like Musashi’s insane test of endurance.

Crazy Samurai Musashi is screening online as part of Fantasia Film, running from August 20 – September 2. To view the full program and buy tickets, head to fantasiafestival.com.

Thank you for reading! What are your thoughts on Crazy Samurai Musashi? Comment down below!

[…] films centering around martial arts have been having a resurgence as of late. Movies such as The Raid: Redemption, Ip Man, and The Man […]

8 Characters I Could Destroy in Physical Combat