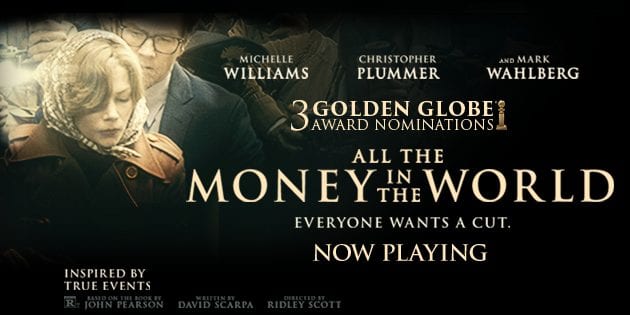 All the Money in the World has received much praise for the snap decision to take Kevin Spacey out of the film and replace him with Christopher Plummer.  As a result, the film has become one of the more anticipated films of cinephiles everywhere due to pure fascination with the swap and how it was completed in a matter of days.  The following review will be spoiler free. 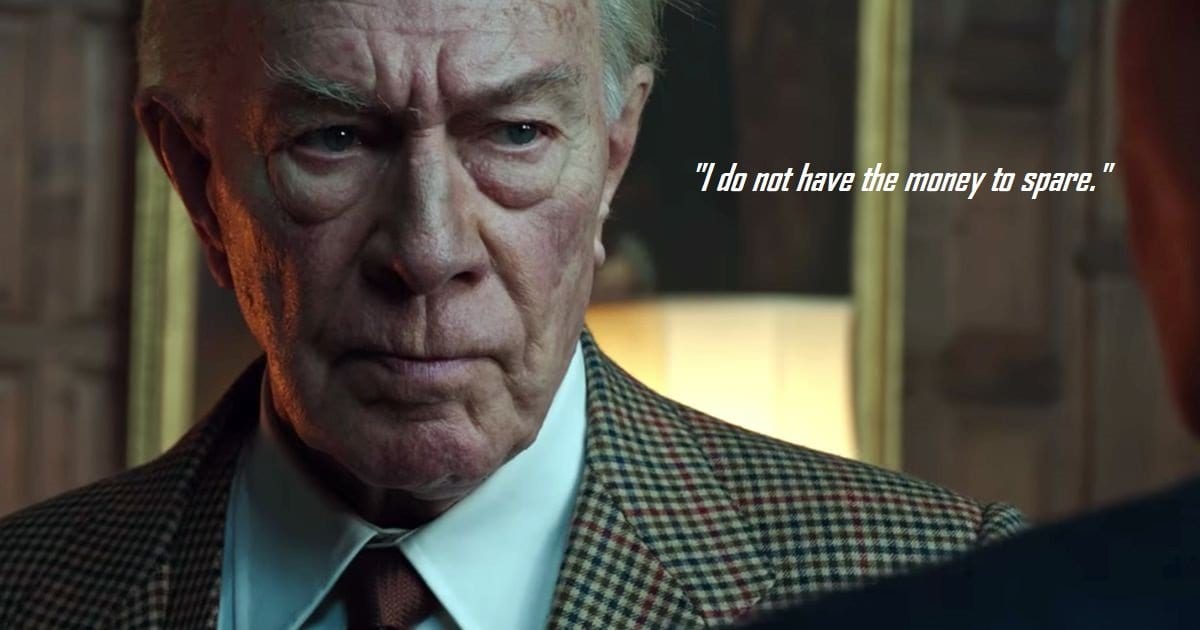 One fateful night, Paul Getty (Charlie Plummer) is kidnapped by a group of assailants and held for a ransom of $17 million.  Panicked, his mother Gail (Williams) quickly turns to Paul’s billionaire grandfather, J. Paul Getty (Christopher Plummer), to pay the ransom.  But, Getty refuses, causing Gail to become more frantic as the kidnappers become more hostile by the second.  As Getty continues to refuse, Gail and Getty’s assistant Fletcher Chase (Wahlberg) form an unlikely bond as they work to get Paul back by any means necessary.

After sexual assault allegations against Harvey Weinstein dropped early in October, other allegations began to come to light.  One of the more high-profile allegations was of Kevin Spacey, who was accused of assaulting over a dozen individuals, many of which were under age boys.  The news caused officials in charge of the AFI Fest to cancel All the Money in the World‘s premiere at the festival back in November.

With similar events to follow for All the Money in the World‘s Oscar campaign, Ridley Scott made the quick decision to reshoot all of Kevin Spacey’s scenes with another actor to save the film from fading off into oblivion.  Scott quickly cast Christopher Plummer in Spacey’s role, claiming that Plummer was his first choice all along but Sony preferred that he choose a more well-known actor at the onset of production.

Reshoots began on November 20th and finished on November 29th with a new trailer using new footage released the same day (see above).  Reports claim that the reshoots cost the financiers $10 million.  However, the move to replace Spacey might give the film a boost in box office revenue as the film was flying under the radar for most of the early awards season.

Scott and his editor worked tirelessly to clean up Plummer scenes, finishing on December 8th, ten days before the film premiered at the Samuel Goldwyn Theater in Beverly Hills, California.

With a background in art design, Ridley Scott’s films always radiate with beautiful imagery.  Scott plays with the color palette of the film in very clever ways to help convey the atmopshere of each scene.  When characters are interacting with J. Paul Getty, there’s a crisp look to the entire picture that accents the absurdly wealthy mansion in which Getty lives.  As the kidnappers interact, you notice the color rush back into the faces of each person as Scott lightens the hue of the filter.  This trick emphasizes the grit and dirt of the surroundings, making everything feel disgusting in a very stylized manner.

It’s also worth mentioning that the Spacey-Plummer swap is incredibly smooth.  There’s no noticeable differences to the color grading or the camera movement.  Nothing appears out-of-place.  In fact, those that are not aware of the controversy surrounding the film will watch the film without ever knowing of Kevin Spacey’s involvement. 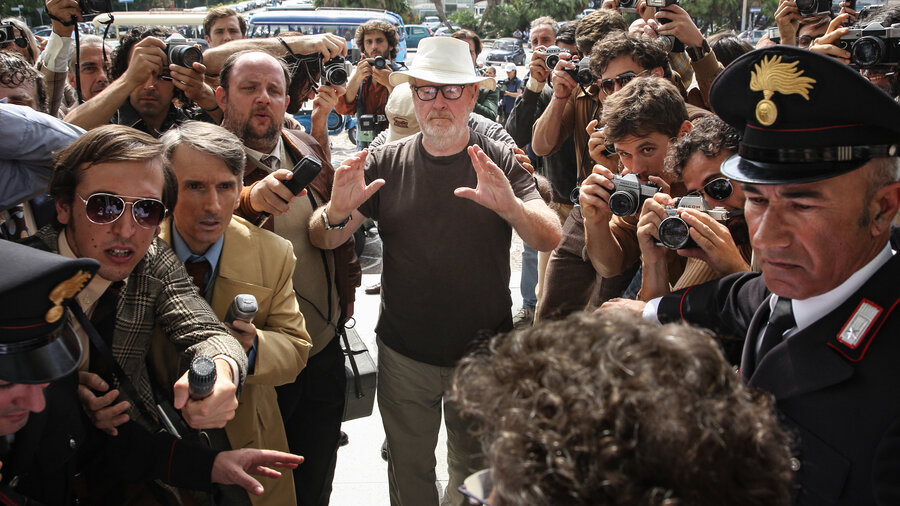 Luckily for all of us, the last second change allowed for Christopher Plummer to shine in one of his best performances in years.  His presence as the oil mogul is undeniable.  Plummer takes on the persona of someone who is vastly wealthy, becoming engulfed in his own hubris but still weary of everyone that attempts to come for his fortune.

As you might expect from the synopsis, J. Paul Getty is unbelievably stubborn.  The film solidly sets up his motivations for refusing to give in to Gail’s requests for ransom money.  Although his actions are quite appalling, you still understand why he behaves in this manner.

It’s said that the best villains are those that are understandable.  While J. Paul Getty isn’t a “villain” by comic book standards, he acts as the main source of opposition in Gail and Fletcher Chase’s pursuit to rescue Paul Getty.  This constant struggle makes for a compelling watch, powering All the Money in the World to solid heights.

But, All the Money in the World doesn’t reach the levels it should.

This notion doesn’t help a story that feels every bit of its arduous two hours and fifteen minute run time, dragging the story to a halt for twists and turns that never live up to their desired effect for reasons mentioned above.  The film is too competently made to toss aside, but the characters and story don’t quite mesh together, leaving the audience emotionally stagnant.

Charlie Plummer’s character falters for similar reasons.  His character has the same expression for most of the movie which makes his scenes lack a feel of desperation that should come with a captive situation.  All the Money in the World also doesn’t offer many reasons to care about Paul Getty as a kidnapped teenager.  The film puts a lot of faith into hoping that you just accept the fact that he’s kidnapped without ever putting much into his personality.  In actuality, Paul Getty is portrayed as somewhat spoiled without ever reforming as a character. Ridley Scott has delivered a product that deserves praise for the issues it endured.  The changes are seamless, and the entire film is very easy on the eyes.  All the Money in the World is well acted, but it can’t help but feel a tad hollow.  Aside from J. Paul Getty, most characters have limited range.  They fail to provide the emotion that All the Money in the World needed to become wholly satisfying.

However, expect Christopher Plummer to receive an Oscar nomination for his troubles. Thanks for reading!  What are your thoughts on All the Money in the World?  Comment down below!

If you enjoyed this article, subscribe to MovieBabble via email to stay up to date via email.

I did feel it didn’t reach the levels it should. The visuals can dazzle, mesmerise, and keep one awake long enough – but that won’t mean the viewer is enjoying the ride.

I can’t really point a finger at what went wrong, maybe Plummer’s excellent performance as an apathetic billionaire or the callous behaviour of the kidnapper who somehow feels the need to save the kid also.

But, it wasn’t a waste of time, the ride of the movie took me to certain places.

Thanks for such a wonderful review. I’m looking forward to check my views on films with you in the future.

Thanks so much for reading! It’ll certainly be a fun exercise! 😁

That would be seriously ironic if Christopher Plummer would get an Oscar nomination for this one. Sounds like a great film though, despite a few of it’s flaws. Looking forward to this one ?

I honestly think he will! He’s definitely one of the better supporting performances I’ve seen this year, and he was already nominated for a Golden Globe! If I had to bet on it, I would lean towards him getting a nomination and maybe even winning!