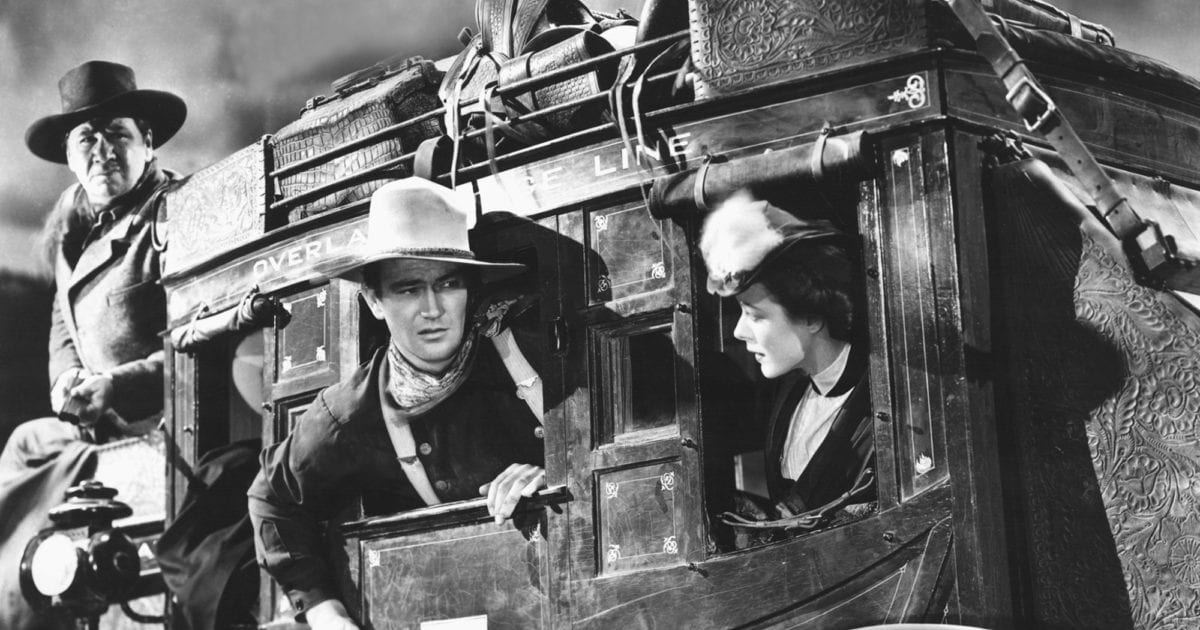 Stagecoach (1939) features a man many have come to know and idolize, one who made a significant mark on hardcore, iconic American cinema. This, of course, was John Wayne.

The “Duke” had an acting career which spanned across a period of 45+ years and a producing career lasting about 25 years. As Elvis was to the creative field of music, so was Wayne to the area of film. He knew it thoroughly. He constructed his roles and conducted his films with expertise, presenting his passion to audiences who found that they enjoyed his style of storytelling.

America enjoyed him so much so that John Wayne became more than a fair actor or another big man in Hollywood. He became a legend. Seeing Wayne star in Stagecoach as Ringo almost three decades before his role as Rooster Cogburn in True Grit is a sobering experience. The Duke is probably best remembered for his Westerns, although he contributed to numerous genres such as war drama and adventure.

Here we watch a youthful John Wayne playing yet another cowpoke. But he is clean-cut and kindly-mannered, though he still holds on to a burning desire for vengeance toward the men responsible for the deaths of several of his family members.

Stagecoach was produced by Walter Wagner. It was directed by the renowned John Ford during what might be considered his “prime” in the filmmaking industry. Ford is best known for his directing of classic Westerns, especially The Searchers. This would not be the first film Ford and Wayne collaborated on, nor would it be their last. You can actually watch the full-length version of the movie on YouTube:

Between a cast of unique, often-troubled characters, who are more or less forced to be in one another’s company, tension build quickly. Each has a past from which he or she is either running or trying to face. Together, they sweat out a long and risky journey via stagecoach to get to their destination. Why is the route so treacherous, leading to everyone’s edgy nerves? Quite a few of the stages which have recently attempted to go this way have been cut down in Indian attacks. And it’s rumored the infamous Geronimo is the man behind it.

This doesn’t make for a really pleasant ride. The characters are classic ones. The Ringo Kid (the Duke) is a young man with guts and purpose who shows well-earned respect toward women, no matter how other people may shun them. The particular example we see developing in Stagecoach is Ringo’s decent manners toward Ms. Dallas evolving into a sudden, dreamy and passionate love interest, which she graciously returns. There is one problem though: Ringo is legally bound to go to prison, and Marshal Wilcox intends he get there.

Ms. Dallas (Claire Trevor) is a troubled soul, ashamed of being shunned by society, who tries desperately and often genuinely to help the other travelers, especially Mrs. Mallory (Louise Platt) when she is in the process of giving birth and recovering. The typical Wayne-associated comedy which comes up in the movie is provided mainly by the stage driver Buck (Andy Devine), old Doc Boone (Thomas Mitchell), and an innkeeper at one of the forts the stagecoach stops at for an extended period of time.

Andy Devine would work on a number of other films with Wayne later down the road such as Island in the Sky (1953) and The Man Who Shot Liberty Valance (1962). Here he plays a big-mouth simpleton who makes straightforward observations, is regularly hungry, and frequently critiques himself. Buck is often childlike, having a heart of gold. He and Ringo get along quite nicely.

Doc Boone has a somewhat insignificant history with Ringo’s family, one which vaguely surfaces during the early stages of the journey. A drunkard, he is frequently being overly sociable with Mr. Peacock, who, as you might assume by his very name, is neither a sizeable nor overly courageous fellow. His occupation: liquor salesman, hence Boone’s fascination with him, or rather his merchandise which he takes advantage of throughout the movie.

image via Wonders in the Dark

Inevitably, the Ringo Kid doesn’t do very much soul-searching and suffers practically no regret. His character has little development, and perhaps this is almost a signature of Wayne’s classic roles. The part the Duke plays in the movie simply “is.” He is put in a situation and has to make the best of it. So he does even here with the constant threat of an Apache attack. Just one among many of Wayne’s iconic Westerns, I will not say Stagecoach is his best contribution to the genre, for it likely is not.

However, it can still maintain an audience’s intrigue and enjoyment — even by modern standards. And we all know that not every movie from 80 years ago can say that. But Stagecoach can.

Thank you for reading! What are your thoughts on Stagecoach? Comment down below!

Good review! Stagecoach is the only John Wayne movie I’ve ever seen, so I definitely have to watch more of his films. Since it has been awhile since I last saw Stagecoach, I should get around to watching it again.

Stagecoach is still amazing! Thank you for your post, a very interesting one!

Its influence is huge, for instance John Carpenter always maintains that all his movies are basically remakes of Stagecoach and Rio Bravo (John Ford and Howard Hawks). This is particularly evident in Assault on Precinct 13!