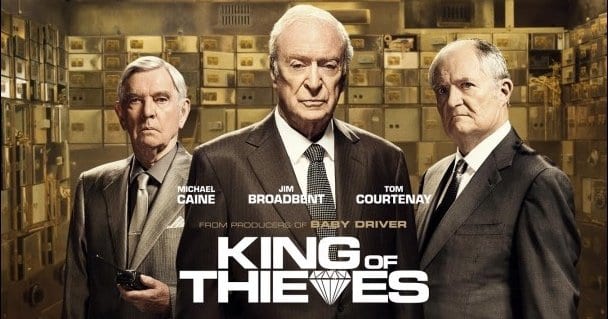 You might not associate Michael Caine with the crime genre, but he’s actually played quite a few memorable crooks in his 62-year acting career. From a professional thief in The Italian Job, to an avenging angel with a cockney accent in Get Carter, to charming con-man in Dirty Rotten Scoundrels, to hard-edged boxing promoter in Shiner, he’s certainly been prolific in this area. (And let’s not forget his oh-so memorable turn as the felonious oil tycoon in Steven Seagal’s directorial debut, the ultra-violent/environmentally-aware/massive-ego project, On Deadly Ground.)

He’s actually quite good at acting in this genre. Even in his winter years, he’s proven himself to be quite the bad-ass, such as when he played the senior citizen vigilante in Harry Brown. In King of Thieves, he’s back to thievery, playing the real-life Brian Reader, who was the ring leader in the infamous Hatton Garden Safe Deposit Burglary, in which over $200 million in valuables was stolen.

Caine is accompanied by other British heavyweights in the film, namely Jim Broadbent, Ray Winstone, Tom Courtenay, Paul Whitehouse and Michael Gambon. Nobody could rightfully call themselves a fan of cinema and not get excited about this star-laden heist film.

Written By: Joe Penhall (based on a magazine article by Mark Seal)

Brian Reader (Michael Caine), a pensioner and former professional thief, begins to struggle with daily life after his wife of many years passes away. At that point, a young man named Basil (Charlie Cox) approaches Brian to entice him on a potential heist he has devised for a safety deposit facility in the London area known as The Hatton Garden Safe Deposit Company. Basil’s knowledge of the security systems makes it particular vulnerable for experienced crooks, especially during Easter weekend when there’s less chance of witnesses or roaming cops.

Initially Brian isn’t interested, as he wants to hold true to the promise that he made to his wife that he wouldn’t engage in criminal activity again. But the silent mornings and empty bed become too much for him. There’s no significant other to live for, so why not live dangerously just for the thrill of it?

Brian begins assembling the usual suspects of reliable crooks. These are men he knows from the old days. Each one of them has their own particular quirks. There’s Terry (Jim Broadbent) who’s a borderline psychopath; there’s the fiery Danny (Ray Winstone) who despite his age still has a lot of youthful vigor; and there’s the unassuming yet scheming Kenny (Tom Courtenay) and Carl (Tom Whitehouse) who lives off of disability living allowance checks.

If they manage to successful break into this safety deposit facility, the pay-off could reach many millions due to its stock of precious diamonds. But even if they succeed, greed can still turn these men apart. No matter their history or how close they might seem, never underestimate the power of simple greed.

Don’t Mess with Them. Image via Joblo.com

When it comes to its main selling point, which is watching these thespians play off each other, the film absolutely delivers.

Michael Caine is in his usual reliable form playing Brian Reader, a former thief returning to crime after the death of his wife. He commands authority among his fellow thieves while also struggling with grief.

Jim Broadbent is genuinely unnerving as Terry Perkins, the thief with a psychopathic edge, a man whose demented stare will make you think twice before crossing him. This is especially apparent in one sequence when he threatens one of his associates with a chair. You realize that no matter how old or feeble he might seem, he’s not afraid of anybody. One of the film’s highlights is when his character stares down Michael Caine’s character. This sequence is brimming with intensity and it almost seems like it could turn extremely violent.

Ray Winstone brings forth his usual dosage of machismo as Danny Jones. Winstone is no stranger to the crime genre; my favorite of his has always been Sexy Beast and the underrated 44 Inch Chest. He has the presence of an enforcer or even as a crime lord, so this is a part he could seemingly do in his sleep. But he certainly doesn’t slack off in the part, imbuing the necessary intensity while also delivering great banter.

Tom Courtenay brings a lot of humor in the proceedings playing John Kenny Collins, a slippery character whose willing to change allegiances if it could profit him in any way. He’s also the one mostly afflicted by his age, signified by when he humorously falls asleep when he’s on the lookout for cops.

Paul Whitehouse as Carl Wood fits among the fold perfectly. Unfortunately, his character isn’t as fearless as the rest of the gang which does inevitably cost him.

Michael Gambon is, admittedly, slightly wasted as Billy “The Fish” Lincoln. Being a close friend of Collins, he’s on the sidelines, trying to profit from their thievery as much as possible. He’s an aging drunkard with a short bladder, who does add a lot of humor in the film. But since Gambon has played many fantastic gangster villains in his career, from Albert Spica in Peter Greenaway’s The Cook, The Thief, The Wife and Her Lover, to Eddie Temple in Layer Cake and Mike Smythe in the short-lived and underrated HBO show, Luck, I did wish he had more interesting things to do.

Last but not least, we shouldn’t forget about Charlie Cox as Basil, the youngest and meekest of the gang. Since he’s primarily famous for his playing of the roguish bodyguard Owen Sleater in Boardwalk Empire and our favorite blind superhero in Netflix’s recently canceled Daredevil, it’s nice to see Cox in a more subservient part. Easily mocked and intimidated by the elderly hoodlums, there’s a still a hidden shrewdness beneath his sensitive demeanor.

The biggest issue with the film transpires after the heist has been committed. It’s the most exciting part of the film because all the characters have to work together leading some great banter. After this plot has been resolved, the aftermath is nastier, as some characters begin to turn against one another. Greed and paranoia comes into play, different allegiances are made and it takes quite some time before we see all of them together again.

This might all have been part of the real-life story, but it’s not as interesting as what transpired before. It also means that much of the great chemistry is lost since characters become more hostile towards each other. You’re just longing for the earlier scenes when these old geezers reminisce about the old times or breaking each other’s balls.

In the background, we also see the cops tracing their steps. None of the cops receive much characterization which is a shame because it could have been interesting to have some lively characters on the lawful side too.

The aftermath simply isn’t as interesting, especially when you’re aware of the inevitable proceedings. There’s a definite lack of tension which should have replaced the majestic chemistry that transpired in the first half of the film.

I Wish I Got to Know Them Better…

Image via The Fan Carpet

I also wish I knew more about these individuals. Histories are alluded to but never expanded on. Brian Reader’s criminal history shows a proclivity for homicide, but the film only briefly mentions it. An argument could be made that this film wasn’t about this past, it was about this specific moment of life. I think it would have made the character more interesting if some of his darker tendencies were explored.

Perhaps it would have made the character less likable as well. As a viewer, you empathize with Reader the most due to the death of his wife. But I think it would have been a fair portrayal. There’s also not much development of him turning to crime again. It just happens. It would have been nice if we saw more scenes of him struggling with daily life.

A similar case can be made for other characters. I needed a little more background, a little understanding of where they came from. Broadbent’s character casually mentions he was on the run for years. Wouldn’t it have been interesting to know more about this? All of these characters are perfectly portrayed by such legendary actors, but none of them get the development they deserve.

King of Thieves is a must-see just to watch this ensemble of legendary actors together. Seeing these men play these experienced hoodlum and bantering in their street lingo is as entertaining as you’d imagine. Their banter ranges from the humorous to the downright hilarious. I’d easily watch a series of films starring these tough old men.

The film does however become less interesting in the second half as the chemistry between these characters are sidelined in order to stay true to the real-life plot. One could commend its historical accuracy, but it’s just not as interesting.

Despite the great performances, you do wish you get to know more about these characters, especially when the film alludes to their sometimes violent history. This stops the film from becoming a British crime classic.

Even so, I mostly had a blast watching this film. It delivered on its most basic promise. So if you’re a fan of these actors, I’m sure you’d get a kick out of it. 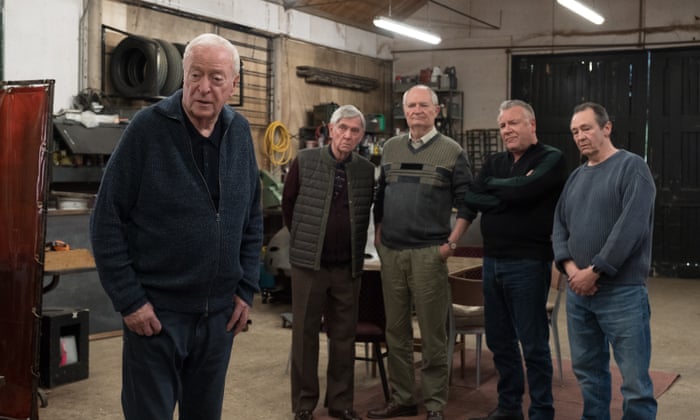 Thank you for reading! What are your thoughts on King of Thieves? Comment down below!

I love Caine he is an extraordinary actor one of my favorite movie by him is “The man who would be a king”. Great review by the way!

I think you’re the first positive review I’ve heard about this film.

I love being controversial.