Long Live the Hud: 25 Years of ‘The Hudsucker Proxy’ 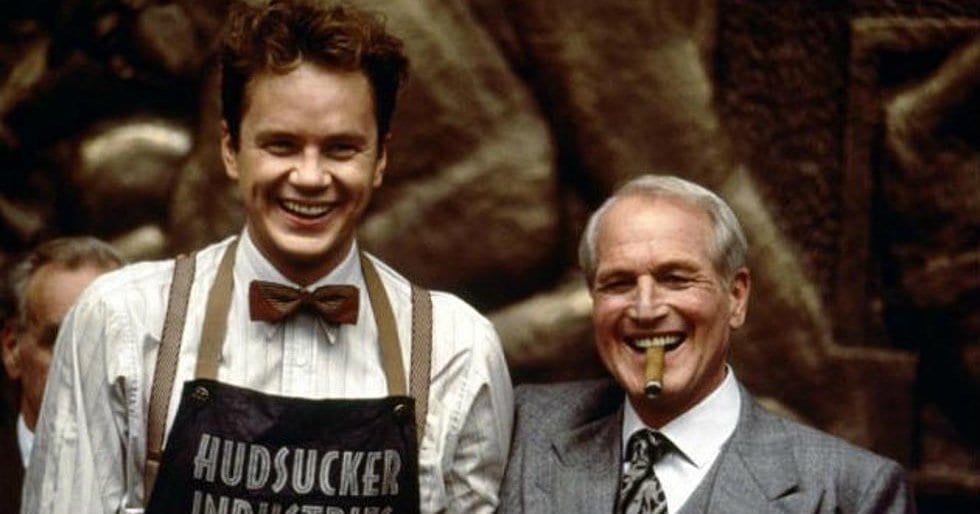 The film world rightly regards Joel and Ethan Coen as among the most innovative filmmakers of their generation. A large part of the brothers’ popularity is their uncanny ability to work within various genres while also turning genre tropes on their heads. Over their 35 years in the biz, their masterful, darkly comic storytelling has taken on numerous forms. Westerns, heist flicks, adaptations of Homerian epics and Cormac McCarthy novels — they’ve done it all.

A quarter-century ago last week, the Coens unleashed one of their boldest genre explorations yet. The cinema buffs intended The Hudsucker Proxy as a tribute to the classic Hollywood comedies of Preston Sturges, George Cukor, Howard Hawks, and Frank Capra.

Unfortunately, the film was widely misunderstood upon its release. It tanked at the box office and got a lukewarm reception from critics. To date, it remains an underappreciated entry in the Coen canon, lacking the cult status of, say, A Serious Man or Raising Arizona. But that doesn’t make Hudsucker any less brilliant or endearing. Its eccentric wit, daring scope, and devoted craftsmanship deserve much more recognition. 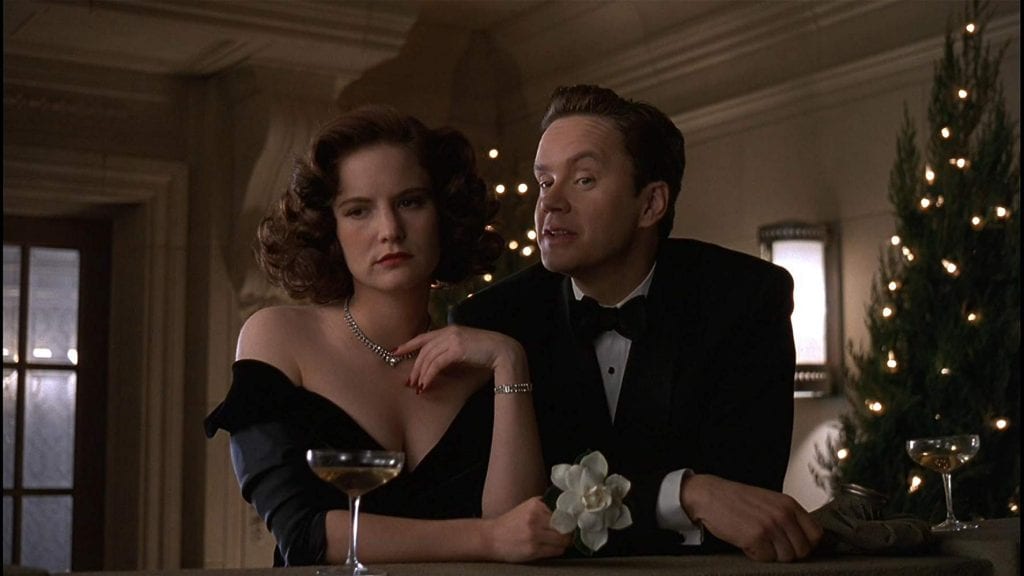 1958: Wealthy New York industrialist Waring Hudsucker (Charles Durning) has just jumped to his death from the top-story window of his company’s building. His crafty right-hand man Sidney J. Mussburger (Paul Newman) is distressed to learn that Hudsucker stock will soon be available for public sale. He hatches a plot to replace the late president with a “fall guy” who will diminish stockholders’ confidence in the company.

His pick for the job? Norville Barnes (Tim Robbins), an optimistic small-town inventor who’s just taken a job in the Hudsucker mailroom. Mussburger installs Barnes as head of the company, where he’s ultimately hailed as an “Idea Man” upon the surprise success of his new product idea. Meanwhile, Manhattan Argus ace reporter Amy Archer (Jennifer Jason Leigh) goes undercover as Barnes’ secretary to find out the truth behind his rise to power. 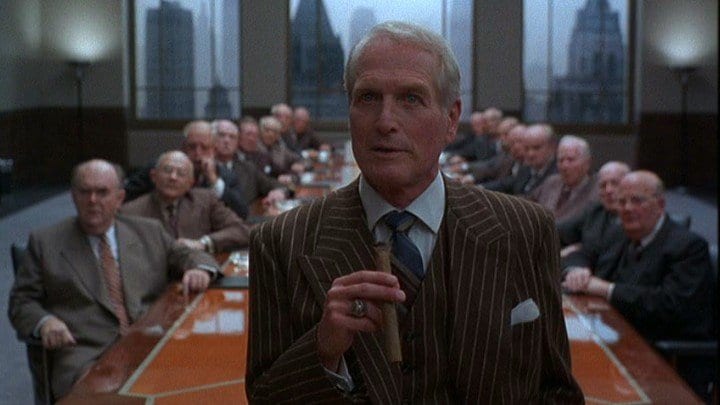 “That gag’s got whiskers on it!”

With The Hudsucker Proxy, the Coens create a sweeping vision of post-World War II America — and commit to it tremendously. Think of it as a classic screwball comedy with the advantage of 40+ additional years of cinematic innovations.

For almost two hours, the movie maintains the absurdist lunacy of a Looney Tunes cartoon. It makes everything huge — the facial expressions, the pratfalls, the rat-a-tatting dialogue. Carter Burwell’s rollicking score, with its bombastic horns and over-the-top flourishes, calls to mind the madcap work of Carl W. Stalling. Cinematographer Roger Deakins milks scenes like Waring Hudsucker’s death plunge for all their melodramatic wall-to-wall terror. As a result, the film is a disorienting but satisfying thrill ride from start to stop.

The meticulous little touches count for the most in a movie like this, and the filmmakers certainly don’t cut corners. All the old-fashioned typefaces all over the Hudsucker building, for instance. Or the full-screen shot of a front-lit, immaculately embossed gala invitation. And how about that jovial black-and-white newsreel? It’s all a perfect replica of a very particular time, and it’s pure bliss to watch it all unfold.

This applies to the characters, too. For example, Robbins’ sweet, unassuming Norville updates the Everyman-type characters portrayed by Jimmy Stewart and Cary Grant for a new generation. As Amy, Leigh does her best Katharine Hepburn impression. Her emphatic delivery perfectly mirrors the stylized acting techniques of golden-age Hollywood.

Many of the film’s detractors argue that it favors style over substance. They claim it’s a lovingly-crafted pastiche of classic cinema and not much else. However, the Coens always work in layers, and there’s plenty more happening under the surface here than you’d expect. 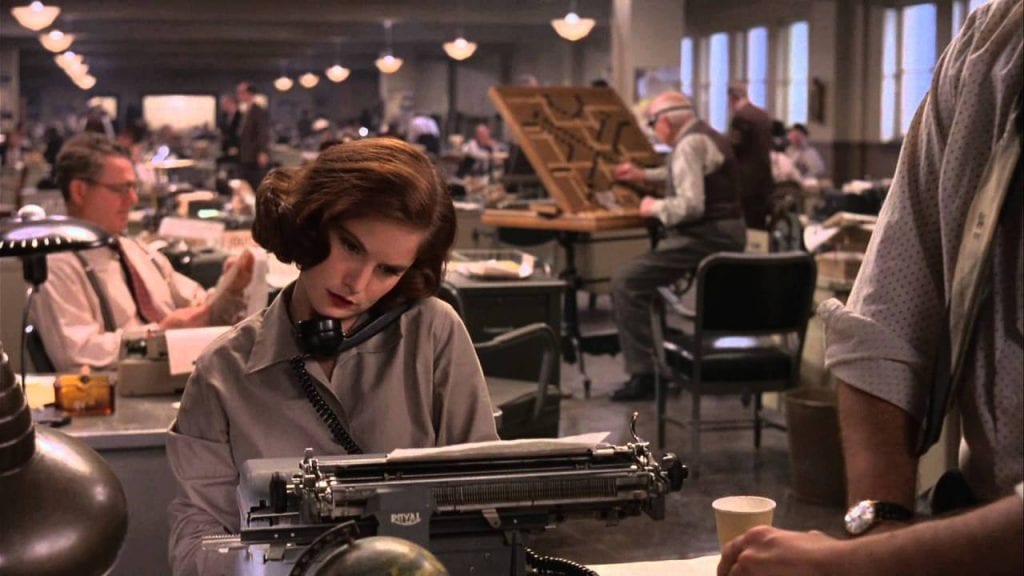 If successful satire is a concept pushed to its logical extreme, Hudsucker succeeds by leaps and bounds. The very organization of Hudsucker Industries serves as the Coens’ way of skewering the cutthroat world of corporate America. It’s a nightmarish place where the big brass laugh from on high while their meager underlings toil in hell.

As an example, mere seconds after Hudsucker’s death, we watch Mussburger stroll over to the front of the boardroom and start smoking the late CEO’s still-lit cigar. (“It’s a pity to waste a whole Monte Cristo,” he scoffs.) Mussburger is a vicious career businessman; his lust for power drives his every move. Norville’s meteoric rise to power, then, highlights just how easy it can be to get chewed up by this savage corporate hierarchy — not to mention how easily that hierarchy can be disrupted.

The chaotic mailroom, meanwhile, presents a whirlpool of heightened working-class horror. Norville’s “orientation” consists of a manager screaming protocol in his ear while workers toss parcels at him from every direction. The employees are asked to observe a moment of silence for the late Hudsucker — which swiftly gets deducted from their paychecks. These workers are expendable tools of labor with the sole purpose of keeping the gears of industry churning. Sure, the satire isn’t exactly subtle — but neither were those slapstick comedies of yesteryear. 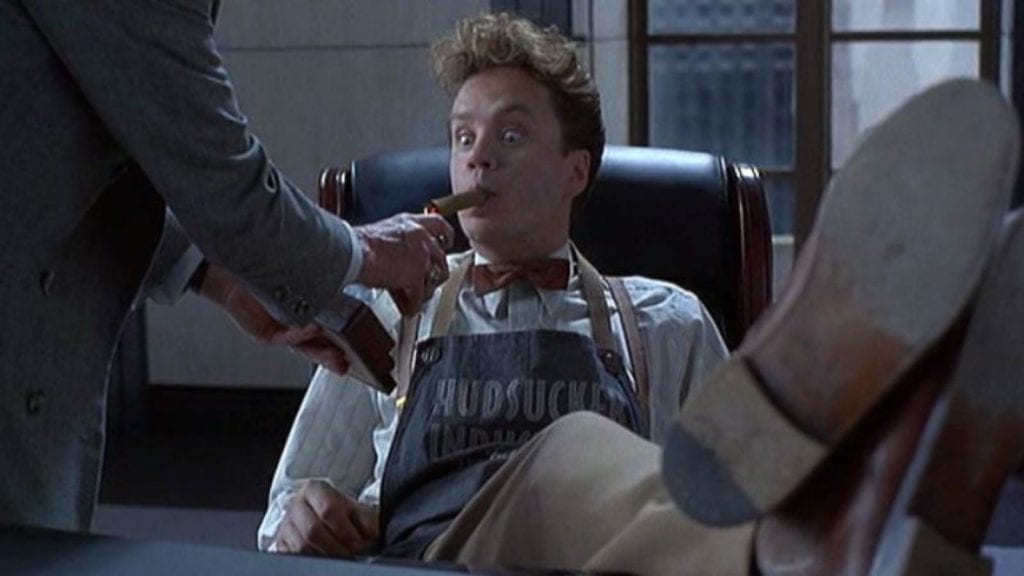 It’s easy to imagine audiences 25 years ago finding The Hudsucker Proxy obnoxious and overly sentimental. And yet, watching it today, it’s just as hard not to fall in love with its goofy charm. Its sly subversion of the movies that inspired it and the big, beating heart beneath its flashy exterior make it an all-around winner. You’ll likely find yourself rooting for the film just as much as you do for its quirky protagonists. It’s an underrated masterpiece — a worthy addition to the repertoire of two of film’s most ingenious tricksters. Long live the Hud, indeed. 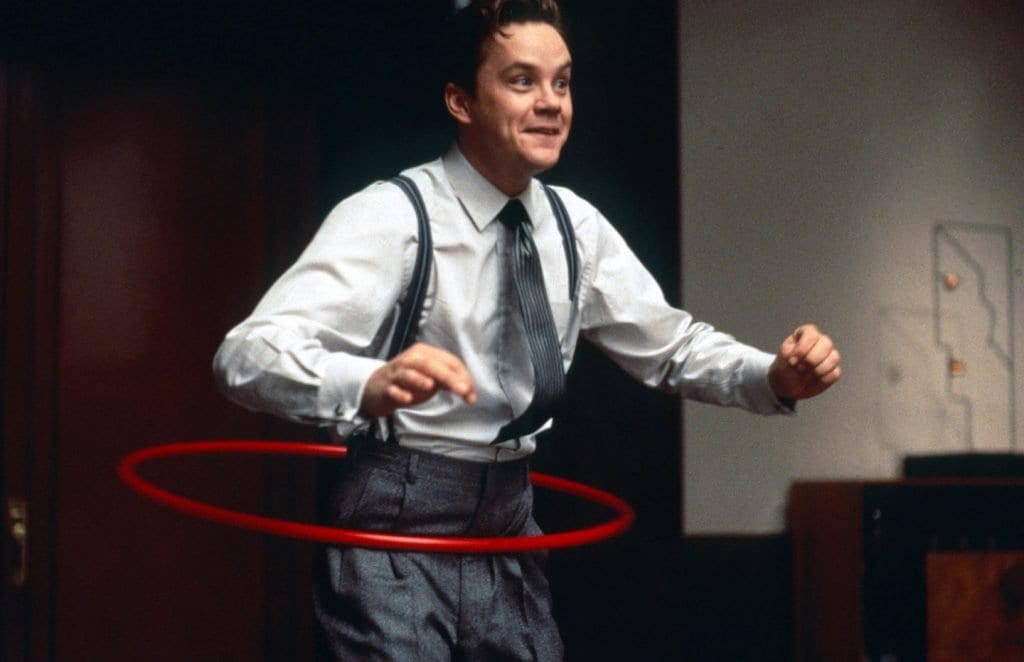 Thanks for reading! What are your thoughts on The Hudsucker Proxy? Comment down below!

Amazin’, innit? I watched “Get Shorty” last night and realized next year will be twenty-five years since its release. I thought it aged well, though. That got me to thinking about the original Matrix, and the modems and telephones used in the movie. Then I realized The Matrix is twenty years old this year. Time…what a concept.