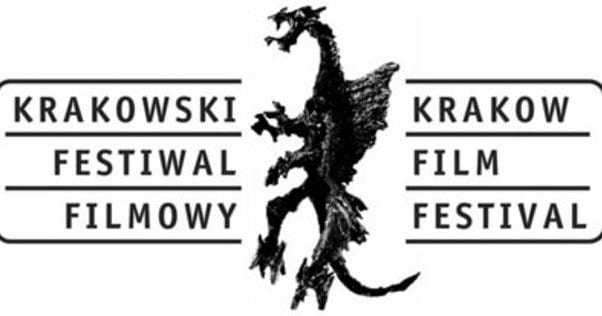 Some stories start at the end. My time at the 59th Krakow Film Festival is one of those stories. This is the place where I saw a mass of films ranging from feature-length documentaries to animated shorts. But today, I’m only going to talk about the mere fraction of the lot. This article will serve as a loose introduction into my breakdown of all the things I saw during this year’s festival. This will not be your traditional review. However, expect those in the near future.

Being a film fan comes with a lot of interesting stories of your own. Look no further than Chris Stuckmann’s video on his experiences with annoying audience members. Watching movies in the theater with groups of people you’ve never met can be as important as watching the movie itself. There are both positive and negative aspects to this that can change your viewing completely. My latest experience at the Krakow Film Festival was a mix of both. 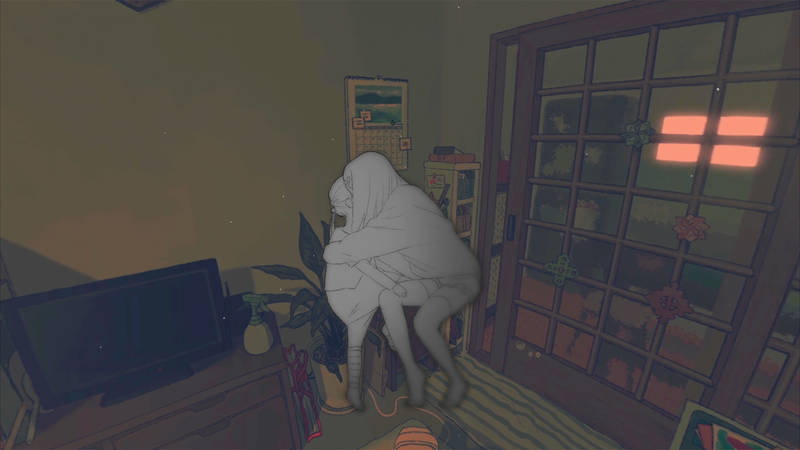 It was a Friday night, and to close my evening off, I went to an entire block dedicated to Japanese animation. One thing to note was that while looking through the program I noticed these animated movies were not anime stylized. That didn’t bother me much knowing the Japanese have a pretty good hold on animation as it is.

So I sat down in my seat in the middle and waited for the short films to come on. Two ladies sat next to my left, and two ladies sat to my right with the obvious “one seat empty rule” separating me from them. There was a fair amount of people in the room as a whole so I was expecting a good show.

Just as we were waiting in our seats we noticed loud stomping sounds and loud chattering noises — they were coming from above. There was clearly a group of people on the second floor partying or celebrating. I thought to myself, “Great. Just what I wanted,” in a sarcastic manner. Shortly after this moment, it was time for the screening to start.

Part 2: So I Thought

The first movie that came on was Flower of Eden. Right from the beginning, things were not off to a great start. The movie was about a mother and a son, and that’s all I could remember. A problem I have is when a painfully uninteresting movie comes on my mind starts to drift into the stratosphere. I try to slap myself back to reality, but at a festival where you’re watching movie after movie, where sometimes the one in front of the other is equally uninteresting, it’s at times impossible to focus. The one thing I remember was the awful art style. The movie looked unfinished and half-baked.

The main characters were blank, as if the animators were lazy to color them in. The colors as a whole were simple. If something was red, it was just that one shade of red. If something was blue, it would be just that. It didn’t help that the form of the story did not compliment its message. This was only the first film so things had to pick up.

Suddenly the noises from above I mentioned earlier turned into cheers. I now thought it was a birthday party. 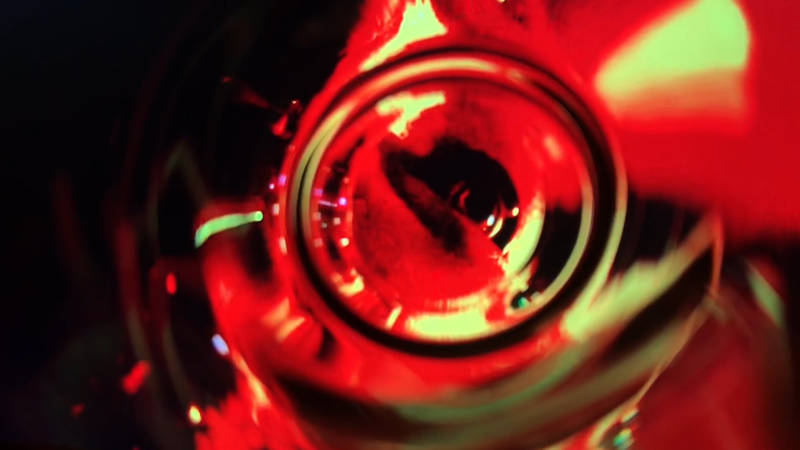 I figured there was no place to go but up from here. Then, we watched the short movie called Bottled Hell and I realized sayings like, “nowhere left to go but up” are often wrong. The movie lives up to the title.

The film captures an angle at which the audience sees a variety of objects from the inside perspective of a bottle. That means items on the other side of the glass appear warped and are harder to make out. Those things were heads of ugly dolls, hands, nails, giant pores, and other things. Some of it looked really discomforting. In the background played random whispers, mumbles and mutters that aggravated me the more the movie went on. Even if this was the artist’s intention, filmmaking should never be this one dimensional.

Image sitting through 8 whole minutes watching nothing but that. This gave me a lot of time to think about what I was doing wrong with my life. What did I do to deserve this? And at this moment I burst into laughter. My eyes couldn’t believe what they were seeing. It’s as if I hit a near-insanity point. 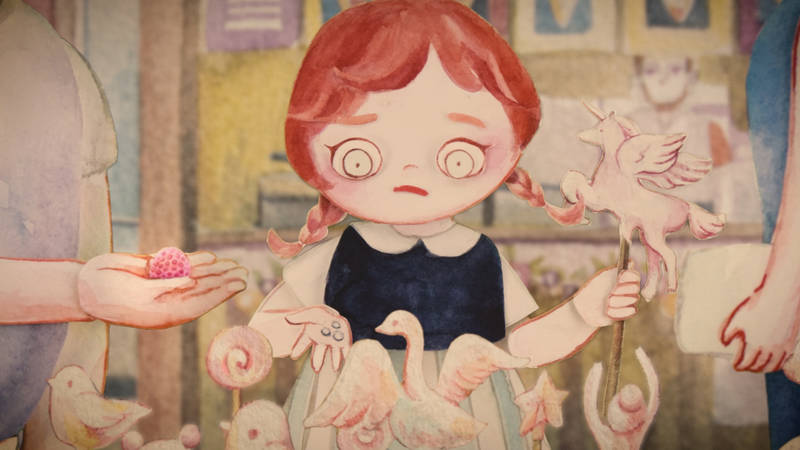 Louisa and the Town of Iberis – image via Krakow Film Festival

The next movie to play was Louisa and the Town of Iberis. After what I witnessed there was no way of topping one monstrosity with another. This time, luckily, my expectations did not fail me and it was not worse. Having said this, the movie was painful to get through either way. The character movement was sloppy, their design unimpressive and by far the worst aspect was the voice acting.

Imagine the most unenthusiastic voices you can possibly imagine. Those were the voice actors. I don’t know what they were feeding them on the day of recording their lines (I hear red meat causes tiredness), but there was no way of excusing such a poor job. It’s like the filmmakers wanted to put out the worst product possible. And the plot is even worse.

So the story is about a young girl, Louisa, and a strawberry from her mother. She wants candy, but she has no money. Then comes a man in his 40s, this time without the white van by his side, and says he’ll pay for the candy if Louisa gives him the strawberry. Louisa does as he pleases, she takes the candy and when she comes home her mother gets mad.

Then some random strawberry-loving fairies come out of nowhere — their voices are even worse. That’s where I lost it once again and started laughing. I felt like I was being talked down to like a toddler, and I wouldn’t even show to this to one. To make matters worse, the people from upstairs started singing Hosanna in the Highest, a church song. This time the entire theater started laughing, including myself, even though that was probably a sign from God to leave.

I did the forbidden and turned the blue light on in the theater. Half an hour had passed; there was an hour left until the end of the screening. There was no way I was going to endure any more of this torture. I told myself that if another movie comes on that dares to test my intelligence, I’ll leave.

Then comes Favoritka. The first and only image you see throughout the film is of a naked woman with all the drawn-on details you can think of, changing textures to compensate for the lack of visuals, and another monotone voice to monologue in the background. I walked out. 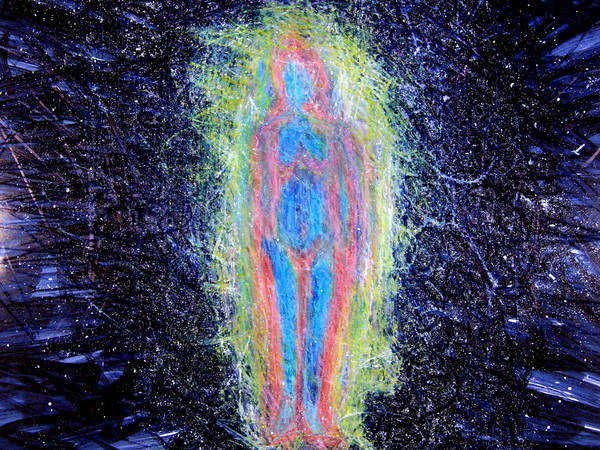 It was late at night and I had to be somewhere early the next day. This was not worth losing sleep over. It was the best decision I could have made that day. I stopped right in front of the auditorium to check my bus ride home. To no one’s surprise, a twenty-year-old girl walked out after me. I smiled, we both knew why we left so I asked, “So, you didn’t like it?”.

I figured I’d be the first person to start a chain reaction. As I was speaking with the girl, a couple in their mid-30s walked out. The girl and I talked briefly about the loud people from upstairs. Then the security guard came up to us. He tried explaining himself, that the people from upstairs should be taken care of. During the screening, I did see a man leave to likely report the situation which explains how the guard knew about it.

The girl said that going back in was not an option and that the people from upstairs is what made watching these movies bearable to begin with. The man smiled and thanked us for not making a big deal about the whole situation.

A part of me wanted to stay just to see how many more would’ve left the auditorium but I had other things to take care of. We wished each other a good time at the festival and went about going our separate ways.

The letdown was real. One of the first things people associate with Japan is anime. This animation block, on the other hand, was the very opposite of that. The characters unexpressive, voice acting deprived of life, the animation itself looked wonky.

I do wonder if there were any good movies playing right after leaving. If that was the case, the festival should’ve placed these films in a digestible order. I did not want to take my chances, though. Especially when the showing was zero for four up to that point.

It’s a shame I had to end my festival on such a wasteful note, however, there will be more articles coming where I’ll be briefly discussing more movies I’ve seen during the event. I implore everyone to follow the rest of my upcoming coverage of the 59th Krakow Film Festival. I’m sure there will be better films worth discussing.

As for the folk upstairs? It’s unclear if they were celebrating someone’s birthday or participating in a mass. However, they did save me from complete disappointment and disgust. Thank you!

Thanks for reading!  What are some of your thoughts on my adventure at the 59th Krakow Film Festival?  Comment down below!

Thank you for sharing your experience! Festival screenings can indeed be very disappointing, I concur…

Wow! That sounds absolutely dreadful.Kinda makes you wonder about the festival screening process.