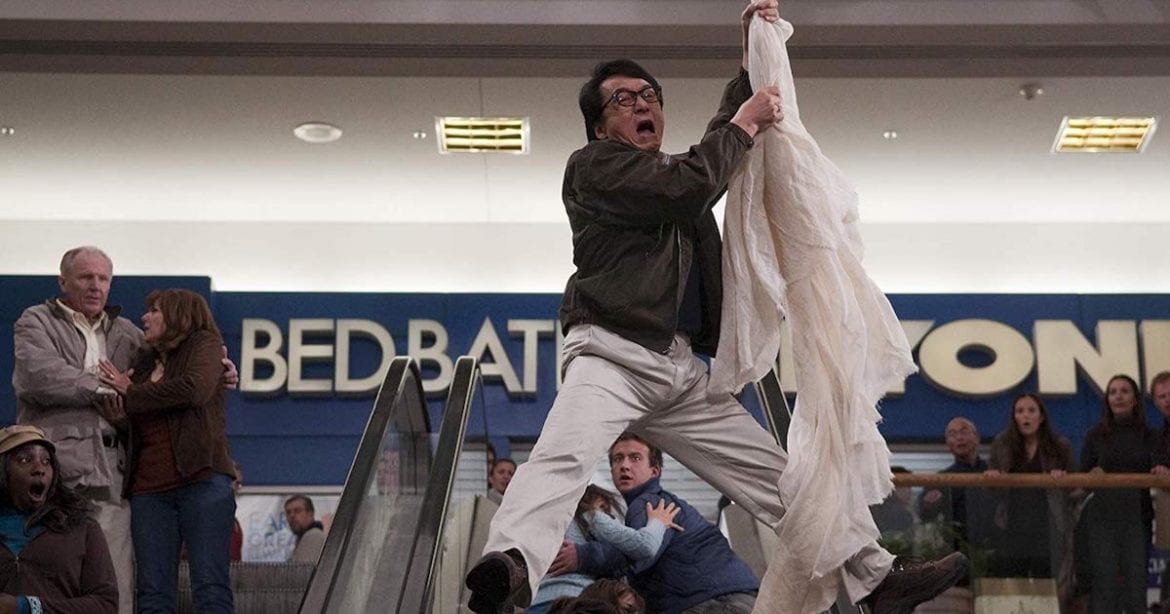 Everything about The Spy Next Door feels dated, be it the premise, the script, the jokes. And I’m not even saying that because it’s turned 10 years old this month. When I was trying to pay attention to this movie in between the bouts of searching desperately for a second screen or considering just throwing in the towel and sleeping for 72 hours instead (a much better use of my time), I was convinced that this cadaver had been exhumed from somewhere between 2004-2007 at the latest. Can you think of nothing more 2004 than secret spy Jackie Chan babysitting a trio of his girlfriend’s troublesome kids, all the while fighting a Russian terrorist with the help of his partner Billy Ray Cyrus? It basically writes itself (it probably would’ve worked out better if it did).

The less said about The Spy Next Door, the better — ultimately, it’s a bland, formulaic caper that barely classifies as a romp. The only part of this movie worth focusing on is its star, Jackie Chan, and, as it turns out, there’s plenty to focus on. Sure, he may present himself as a naive, wholesome, family man but you don’t have to dig deep to unearth the shadier side of Chan.

As a young and successful star in the Hong Kong cinema scene, Chan fell into the same trappings as others his age and both he and his career survived to be able to publish an unusually candid memoir titled Never Grow Up about a year back. In it, he discusses his alcoholism, infidelity, and vanity. In mention of his excessive drinking, he says “I drove drunk all the time. In the morning I’d crash my Porsche, then in the evening, I’d total a Mercedes-Benz. All day long, I went around in a haze.” He regales the reader with tales of the time that he bought seven expensive watches in cash to flex on his stunt team, his favorite prostitute ‘Number Nine’ and his adultery and the backlash that ensued: “When the news broke about an affair I’d had that resulted in a child, the media frenzy was like a bomb going off. I wanted to phone Joan [Chan’s wife] but I didn’t know what to say. I wouldn’t be able to explain this.”

All pretty bad right? However, as I said, anyone who’s young, famous, rich, and attractive is, sadly, destined to follow a similar path a large amount of the time. That doesn’t make his dangerous and callous behavior okay, but I won’t hold it against him as much as his other transgressions. Similar personal logic follows for the time he became so mad with his son that he “picked him up with one hand and flung him across the room, and he crashed into the sofa.” Again, terrible, but lacking any sort of context — and assuming it’s the only occasion he hurt his son with the lack of evidence of further abuse — it’s something I’m willing to look past, is what I’m trying to say.

This could just be a case of separating the art from the artist but even still, you could argue that Chan has done plenty since to counteract the reckless boy he used to be. He’s used his vast wealth to pledge and raise millions for charitable causes, is a UNICEF ambassador, has campaigned for conservation and against animal abuse and has vowed to donate half of his assets to charity — after he dies. Call me cynical but a posthumous donation of only half of your assets when you only have two members of your family left behind to provide for and, as of 2016, you were the second-highest paid actor in the world seems a little less than generous. I’m reminded of a quote by the great Frank Reynolds: “When I’m dead, just throw me in the trash.”

However, it’s not these acts which he so fruitfully owns up to as past mistakes and opportunities to grow that I take grievance with. Remember when Chan casually mentioned that the affair he’d had resulted in a child? Turns out it’s three members of his family left behind to provide for. Only it would be if Chan ever financially or otherwise supported the child, his illegitimate daughter Etta Ng, and her mother, former Miss Asia, Elaine Ng. Etta’s relationship with her mother has been strained for some time, with Etta having her arrested twice for complicated reasons and both parties airing their falling out quite publicly. She and her Canadian influencer wife Andi Autumn claimed to even be homeless for a period of time due to ‘homophobic parents’. While China’s views on LGBTQ+ people have been making gradual progress towards the social norm, there’s still a lot of work to be done. Same-sex marriage is still not an option and adoption is impossible for those wanting to start a family. Transgender identity is considered a disorder. Conversion therapy is still legal and is evidenced to have been encouraged by doctors.

If you’re keeping up with any faucet of current affairs these days, you might be inclined to agree. Branches of news ranging from politics to gaming found themselves wrapped up in the Hong Kong riots in some way — riots which are way too much to cover for this particular piece. There are plenty of reasons to dislike China’s government, be they petty or crimes against humanity, it’s all valid. Would you like to take a guess at who their golden poster boy is?

Jackie Chan has been an avid patriot and China advocate for decades. By patriot, I mean less eating apple pie on July 4th and reciting the pledge of allegiance at school every morning, more flying the Confederate flag and not having the excuse of living in Mississippi. He called protestors who had previously attempted to interrupt the 2008 Olympic torch relay in Beijing to raise important issues on the world’s stage “naughty boys” in a weirdly erotic move and threatened that they’d ‘better not get in [his] way’. More damaging has been his statements regarding freedom and his home country of Hong Kong, infamously stating “I’m gradually beginning to feel that we Chinese need to be controlled” in 2009 and throwing his support behind the mainland as recently as 2019 during the ongoing anti-extradition riots, stating he was saddened and depressed by the riots and hopes that Hong Kong can return to peace (‘under China’ was implied). He also naively claimed, “the ‘Five-starred Red Flag’ is respected everywhere around the world.” Feared might be a better word.

By all accounts, Jackie Chan has carried martial arts films great strides forward in Western culture and has won himself many supporters for his impressive stunt work, action set pieces, and both slapstick and skilled fighting style in films like Rush Hour, Shanghai Noon and Rumble in the Bronx, among many others. While there’s no denying his talent, waning though it is, and his charming on-screen persona, even the most infallible public figures have skeletons in their closet, and Chan is no different. As the saying goes, don’t meet your heroes, they’re sure to disappoint you.

Thank you for reading! What are your thoughts on Jackie Chan now? Do you care? Have I ruined The Spy Next Door for you? Was it not already ruined? Comment down below!

[…] celebrates its 80th anniversary this year, which is astounding to me. It’s staggering to think that animation has been around […]

Podcast of the Apes