‘Swallow’ and the Art of Making Audiences Squirm 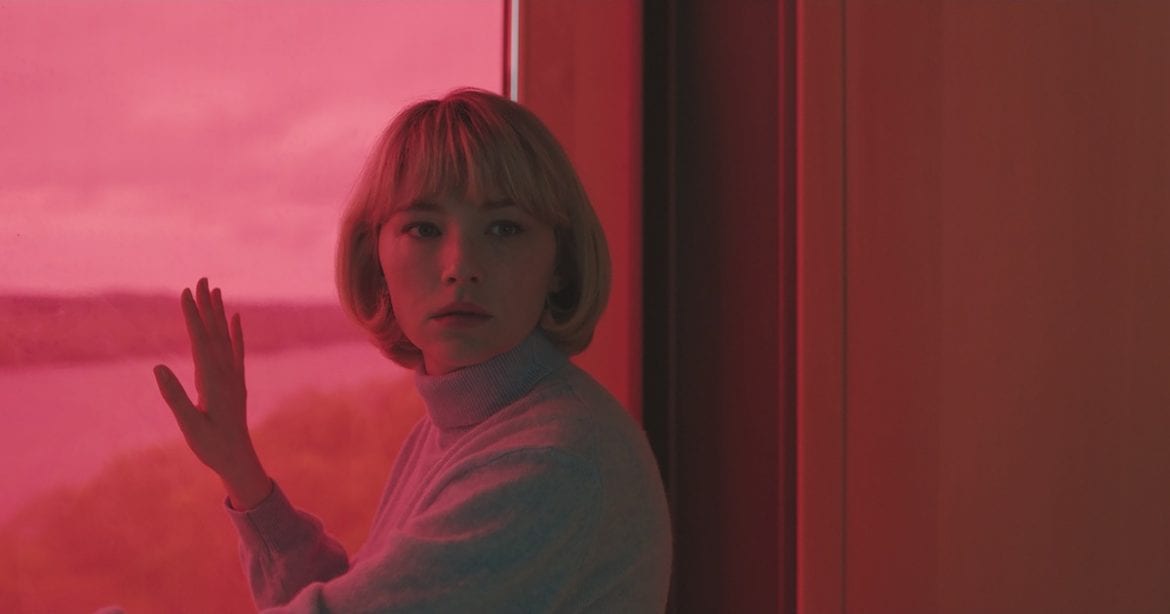 From generations of watching blood spew all over the screen — brought upon by some of our favorite horror icons and other nefarious ne’er-do-wells — we’re all a bit conditioned to bodily harm in movies. Our sadism knows no bounds, often siding with the villain in the hopes of more bloodshed. But turn that body horror into something perversely clinical, be it a close-up of a needle injection or some other deliberate action, and we all collectively shout, “NO! DON’T YOU DARE!” If you would have watched me as I watched Swallow, you would have witnessed similar yelps of desperation.

The torture device of choice in Swallow is watching Haley Bennett’s Hunter Conrad try and ingest inedible objects that get progressively more unnerving after she learns she is pregnant, starting with a more harmless marble before quickly moving to tacks, batteries, and much more that’ll have you squirming to no end. In one iconic image, Haley Bennett is laying on the side a bed shoveling dirt into her mouth like they’re crushed Oreo pieces. Each scene contains an accented but naturalistic sound design around Bennett’s mouth to heighten the uncomfortable feel. Frankly, it’s unbearable to watch, But luckily for director Carlo Mirabella-Davis, that’s hardly a criticism.

Thankfully there’s some great thematic depth underneath it all, powering what will most likely be one of the best feminist films of the year.

Haley Bennett Has Never Been Better

Personally, Haley Bennett has been an actress I have been tangentially aware of for the better half of the last decade as she popped up in various mainstream supporting roles — mid-to-high budget movies such as The Equalizer, Hardcore Henry, The Magnificent Seven, The Girl on the Train, and Thank You For Your Service. Side-stepping the Denzel Washington vehicle, those movies lack any kind of influence on today’s popular culture. Her performances were memorable but rarely the standout of those respective films. But it was hardly her fault: she was often dealt fairly underwritten material and made the most of it with her general level of charisma. Swallow is operating at what feels like the other side of the spectrum. There are very few sets and the focus is entirely on her character.

While her husband Richie (played by Austin Stowell in a role that is frankly a bit shallow) is off at work providing for the both of them, Bennett’s Hunter stays at home, tending to the most basic and least stimulating tasks that one would associate with a traditional housewife of past generations — vacuuming, trimming plants, skimming the pool, etc. Bennett’s haircut and attire even hint at a 50’s-style retro which further underlines the gender dynamics at play. Bennett’s character is extremely timid and submissive by design. Smiling one night in bed, she turns to Richie and remarks that she did something unexpected — finally choosing a color for the drapes. Moments such as this one are never arch, however.

Ostensibly, Swallow is about a woman quickly realizing her lack of agency because of suffocating gender roles and learning (albeit in a very strange way) to find freedom over her situation and body. Hunter explains that she puts objects in her mouth because it is one of the few instances she feels in control. For once, she actually gets to make her own choices. Haley Bennett brings a clear sense of emotional honesty to the role that is deeply earnest and never fake — I can only imagine how poorly this could have gone in the wrong hands. If fumbled, it’s the stuff of legendary memes.

Much of Swallow‘s success can also be attributed to Carlo Mirabella-Davis’ firm hold on this material. For such a sensationalist concept, Swallow is very stripped down and measured. Mirabella-Davis’ rarely adds any frills, opting for camera movements that unsettle in their precision. Even when Bennett is not forcing a pointy object down her esophagus, the tension comes from the idea that it can happen at any moment, and the filmmaking will never tip its hand.

The house that Hunter occupies is overwhelmingly sterile. It’s the sort of lavish, but boxy and uninviting style of home The Invisible Man and other horror-thrillers have highlighted recently, where there’s a clear understanding of the couple’s wealth but also the lack of any warmth whatsoever. The kind that says “listen, you might die here, but check out that view!” Honesty, it’s more of a prison than home, especially when Richie and his family become aware of Hunter’s afflictions and begin to watch over her at every possible moment with the help of a housekeeper (Laith Nakli).

But it all comes back to that damn sound design, which will continue to haunt my dreams for the foreseeable future. It’s not much more than maybe a 5% volume increase around Haley Bennett’s mouth, but it makes all the undesirable crunches and gurgles excruciating.

One does get the sense that Swallow is slightly basic in its initial setup, however. Austin Stowell’s Richie amounts to a husband who does business-y things and must answer emails about “the account” at the dinner table. You know, the sort of nebulous business job movies love to trot out. Richie’s parents (David Rasche and Elizabeth Marvel) are more of the same, checking the box as the standard heinous in-laws. The opposition to Hunter, the stand-in for patriarchal norms, is oversimplified in that sense.

But Hunter’s journey is rich and wholly captivating. As Swallow progresses, Carlo Mirabella-Davis continues to peel back layers of the character’s damaged psychology and upbringing. In post-stomach pumping therapy sessions, we begin to learn how Hunter unknowingly repressed much of her dissatisfaction throughout her life to live up to certain ideals. Mirabella-Davis’ exploration of this character is always honest, presenting someone who is aching for better treatment despite not knowing quite how to ask for it…until a stunning third act.

The final moments recontextualize a lot of what came before. Not with a twist, but in emotional impact. The last bit of swallowing you see has the exact opposite effect of all that came before; at last, the oppression fades, and you experience a powerful sense of freedom.

Thank you for reading! What are your thoughts on Swallow? Comment down below!

[…] sister Lindsay (Haley Bennett) is …in the movie. To little memorable effect. Not much to say there, which is a huge […]