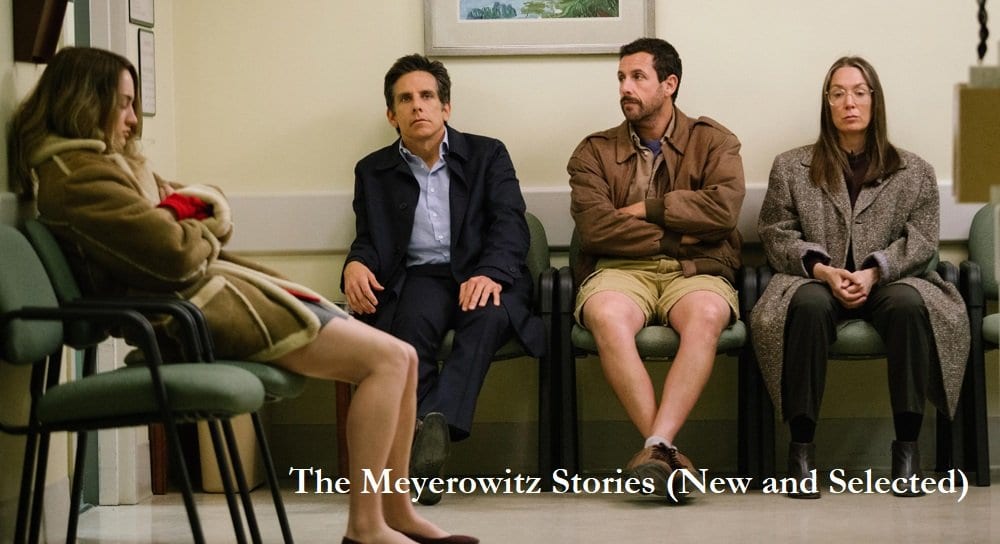 Adam Sandler has made a living recently with Netflix-exclusive films, and now he’s partnered with writer/director Noah Baumbach in The Meyerowitz Stories (New and Selected) in a familly drama that has the comic departing from his usual schtick.  After premiering on the festival circuit, The Meyerowitz Stories is now available for you to stream in the comfort of your home.  The following review will be spoiler free. 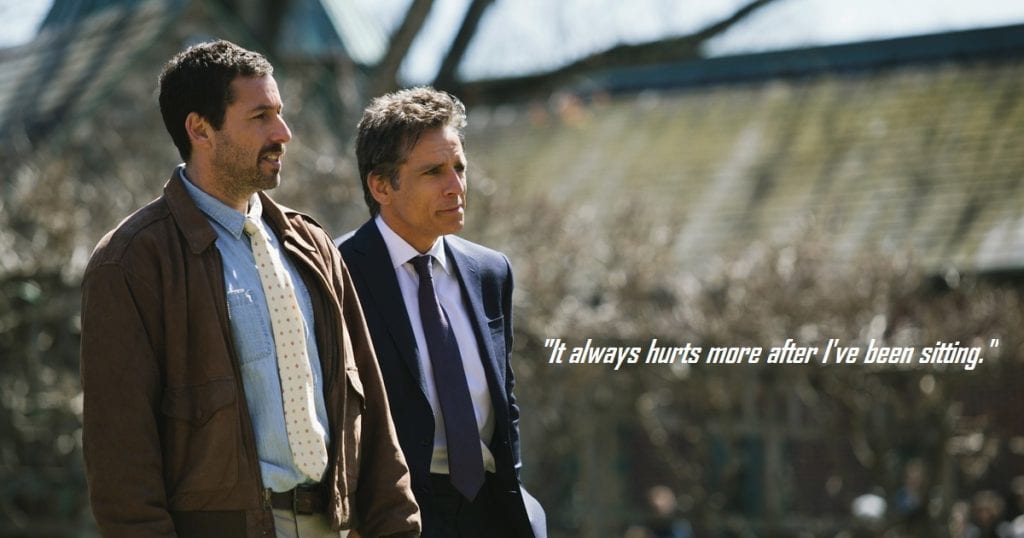 The members of the Meyerowitz family are at difficult times in their lives.  Danny (Sandler) has just recently gone through a divorce, leaving him without a place to stay.  Matthew (Stiller) is successful, but doesn’t necessarily feel a sense of belonging.  Their father (Hoffman) is a curmudgeon as usual, only now his art career has taken a serious downturn.  And Jean, well, she’s just going through the motions of life.

Although their family dynamic is strained, they must all come together as Dad has been put in the hospital, leading the children to rethink the barriers between them all.

As part of the current “streaming wars,” Netflix has continued to push original content from within as to keep licensing costs down and attract new customers with tons of new options.  One of the main players at Netflix has been Adam Sandler himself, helping Netflix to gain subscribers with his films despite all of them earning very negative reponses from critics.  However, in Netflix’s quest for more content, they have yet to fully tap into prestige pictures, films that garner considerable critical acclaim.

In order to keep up with Amazon, which has focused on creating quality content, Netflix has recently stepped up their game in trying to improve the quality of their films.  The Meyerowitz Stories looked to add to the company’s desired change, premiering at the Cannes Film Festival early this year where it received a four-minute standing ovation from the crowd.

To the surprise of many, critics came away from the film praising Adam Sandler most of all, calling his performance one of the best of his career.

Out of Control Acting is on Display

And those critics certainly weren’t kidding, as Sandler is a revelation.  The whole cast adds impeccable performances, for that matter.  The Meyerowitz Stories is very much a “slice of life” picture, bouncing around to different stories within the same, loose narrative (hence the “New and Selected” portion of the title).  This structure calls for each actor to be very believable and realistic, forcing  Sandler to relinquish his usual man-boy anature for that of a damaged, yet functional single father.

A special tip of the cap has to go to the legendary Dustin Hoffman for his turn as the father of the family.  The best way to describe his character is that dad that is always complains about something, never shows his love, and is too proud to show his vulnerabilities.  Whether it’s a father figure or a grandfather, we all know someone like Hoffman’s character.

Each performance feels unbelievably authentic.  You won’t find a DiCaprio-esque scene of over-the-top acting that shouts “hey look, I’m an actor” in this film.  However, you’ll find understated, layered representations of highly realistic characters that say a lot without speaking a word.

The Meyerowitz Stories is Lovably Quirky in its Mundane Style

Noah Baumbach earns his writing credit in this project, developing full realized characters that each have their signature quirks.  He strikes a delicate balance between capturing a grounded feel in the interactions between characters but also allowing each of them to have recurring, silly trademarks that are endearing in their ordinary deliveries.

The Meyerowitz Stories is just awkward, and that description is said with the best of intentions.  You feel the uneasiness of each character as they try to figure out ways to cope with their troubled circumstances.  Often times characters will struggle to find the right words, but you can see the gears turning in their heads.  They want to make things right, but they just aren’t quite sure how to go about it.  With Baumbach’s sure hand behind the camera, scenes play out as they would in life, full of people awkwardly bickering and talking over each other.

Unafraid to Show the Tough Side of Family Life

Baumbach’s greatest feat, however, is perfectly capturing the uneasiness of less than perfect family dynamics.  Families are hardly perfect, and Baumbach understands how to show this concept without making it appear overly dramatic.  Questioning one’s love for a less than perfect family member is at the core of this movie.  The Meyerowitz Stories understands that there’s a ton of grey area when it comes to caring for someone.  They may not overtly show their love for you, they may even disregard your importance.

But, in the end, family ties tap into something that we can’t really explain or comprehend.  Characters harbor resentment for the way they were raised as children, causing them to struggle with returning the favor that was never offered in the first place.  The dynamics on display here are very, very complex, and the film is that much better because of them.

The Meyerowitz Stories isn’t for everyone, but those looking for a quiet, different kind of film will certainly find a lot to enjoy.  Filled with amazing performances (most notably from Sandler and Hoffman), Noah Baumbach’s vision is a subtle, mundane look into troubling family dynamics.  There isn’t some grand catharsis to behold, but, then again, those types of moments don’t really ever occur in life.  It gets an A.

Films such as this one are unbelievably refreshing from the usual fare.  If nothing else, The Meyerowitz Stories deserves your attention just so you can see Adam Sandler not phone in a performance for the first time in a decade.  It’s a lovely sight to see!

In this critic’s humble opinion, The Meyerowitz Stories is the best Netflix-original film to date. Thanks for reading!  What are your thoughts on The Meyerowitz Stories?  Comment down below!

[…] Kush: I adore his work in Punch-Drunk Love and The Meyerowitz Stories, but I think this is his best work ever. Howard Ratner is already an iconic character in my book, […]

This is a wonderful review, and I’m so pleased Sandler is getting this kind of attention. Comics and comedians make the best dramatic actors.

They really do! Couldn’t agree more!

Hoffman looks like a dead ringer for Donald Sutherland in the photo. I’m not big on family dramas/dissections, but looking forward to this one.

That’s a good catch! The Meyerowitz Stories isn’t for everyone, but if you like subdued films, it might be for you!

It’s so great! Sometimes, all you need a quiet, little film to switch it up from the usual blockbuster.

Want to write for MovieBabble? Go to the following link and submit an application!: https://moviebabble971852905.wpcomstaging.com/join-moviebabble/