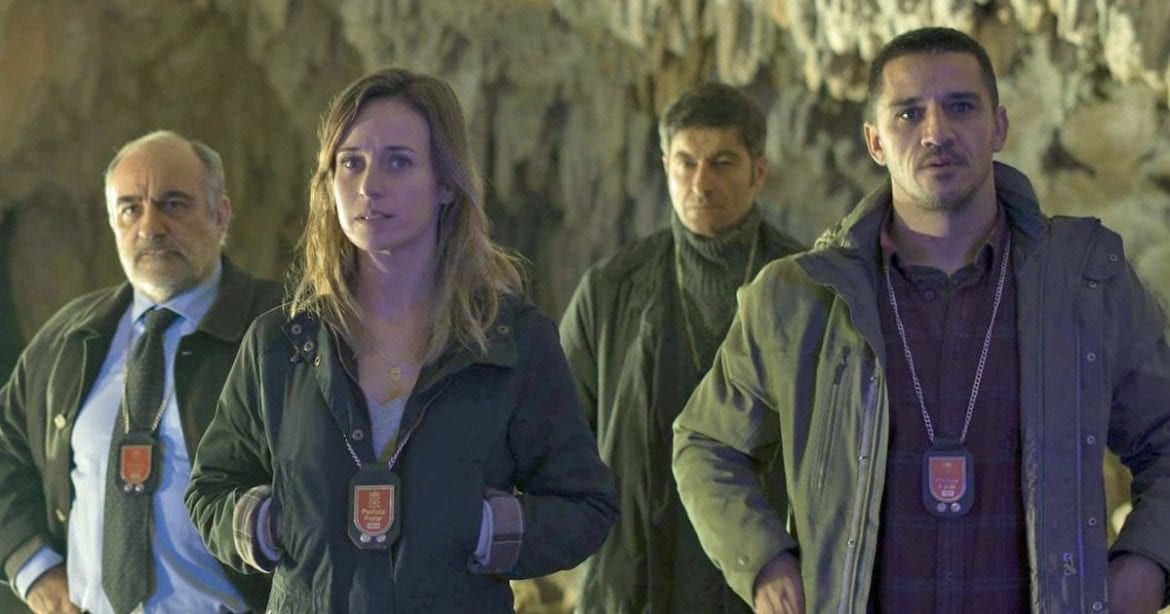 The Baztan Trilogy by Dolores Redondo has sold over a million copies worldwide and has been translated into 31 languages so far. It was inevitable the three stories would be adapted for TV or film.

2017’s The Invisible Guardian introduced Netflix viewers to Detective Amaia Salazar, a Spanish police officer who rose to the rank of inspector before being selected for training with the FBI. On completion of this, she returned to her hometown of Navarre in the Basque region of Spain, bringing expertise in tracking serial killers and an American husband with her. Without going into spoilers for the first film, it was revealed that Salazar had dark family secrets intertwined with many people in the town, both helping her investigations and hindering her safety.

The Invisible Guardian was a solid start to the trilogy carried in no small part by Marta Etura‘s commanding lead performance.  Most familiar to international audiences from The Impossible, she’s notched up notable roles in Cell 211 and Sleep Tight alongside Luis Tosar, one of the biggest Spanish actors yet to make an English language splash. Amaia Salazar has taken the coveted role and absolutely nailed it. Amaia Salazar is a creation up there with Sarah Lund of The Killing. Well-rounded, likable, and professional, she’s a refreshing antidote to the “grizzled/burned out/alcoholic guy detective” that TV and cinema is a little too in love with.

Salazar and her co-detective, Jonan Extaide, carry out measured,  careful police work, which sounds like it might be too dry, but the draw of The Legacy of the Bones (and it’s predecessor) are the cases and the setting they are in.

I deliberately referenced Sarah Lund and the world of Scandinavian crime. The Legacy Of The Bones was produced by Peter Nadermann, who also produced The Millennium Trilogy, based on the novels by Stieg Larsson, and there is a similarity of execution here. The immediate image of Spain as sun and sand would be an odd fit for a noir you might think, but the Basque Country is a mountainous, often wooded region with significantly higher rainfall than most of the country. That renders it a closer match to Scandinavia or the Scottish highlands. (Val McDermid would be another author I would file under “If you liked ‘X’, you’ll like The Inspector Salazar novels.)

It’s also a region with a rich folklore and many superstitions and traditions. (As a little help to save you googling the references in the movie, Olentzero is the Basque equivalent of Santa Claus and Basajaun is the Basque equivalent of Bigfoot.) These stories are fascinating, but as the writers show, they can be twisted or can influence people in unexpected and possibly unbalancing ways.

The killers’ use of Catholic iconography also brings the detectives into conflict with the local clergy, mainly in the form of Padre Sarasola (Imanol Arias), a senior priest more concerned with the reputation of the church than catching a killer. He also might be holding dark secrets of his own. To be fair, nearly everyone in this might be concealing dark secrets — it is that type of mystery. You do need to pay attention throughout as there are a lot of plot strands and nearly as many red herrings.

If The Legacy of the Bones does have a fault, it’s that it does have a lot of threads to follow. Religious sects and mythical beasts, law enforcement politics and family drama, floods, suicides, kidnappings, corruption and last but not least, the sort of complex serial killer with a taste for the melodramatic that is a hallmark of this sort of movie.

It’s to the director’s (Fernando Gonzalez Molina) credit that The Legacy of the Bones doesn’t become overly confusing, but this film isn’t one you can drift in and out of and still hope to follow.

So, Is It Worth Your Time?

Whether you’ll enjoy The Legacy Of The Bones very much depends on if serial killer investigations are your cup of tea. It isn’t genre-transcending at the level of Se7en but it’s a cut above the 90s “Ashley Judd is chased through the woods” movies. (You know the ones, I think she made about 15 of them and I can’t remember the name of any of them. Taking Lives? Was that one?)

The setting gives a welcome injection of novelty, some of the side plots are just the right side of crazy and the cast range from solid to great. If you’re looking for a murder mystery or two (or three, as An Offering To The Storm, the final part of the trilogy, is already complete. It was slated for a June cinema release. Now, who knows.) then you could do a lot worse than The Baztan Trilogy and, specifically, The Legacy of the Bones.

Thanks for reading! What are your thoughts on The Legacy of the Bones? Comment down below!